Border town which exists, with the same name, in both New South Wales and Queensland.

Mungindi, which lies on both sides of the Barwon River and is thus in both Queensland and New South Wales, has the unique privilege of being the only town in Australia where the name is the same on both sides of the border although it has a New South Wales postcode. In theory, because the moment you cross the Barwon River you have moved from one state to the next, this means that during the summer months, when daylight saving is operating in New South Wales and not in Queensland, the town operates on two different time zones. Cross the bridge and you gain or lose an hour. The pre-school is in Queensland and the other schools are in New South Wales. The town's two hotels are on each side of the river which means you could start drinking at 5.00 pm, drink for an hour, walk across the bridge and start drinking again at 5.00 pm. Today the town is a service centre for the surrounding rich agricultural district which principally produces cotton, wheat, cereal crops, wool, sheep and beef cattle. The Barwon River flows through the middle of the town - half of the river is in Queensland and half in New South Wales - and, if you go a few kilometres out of town, you can stand at the point where the border stops meandering with the river and starts following the 29th parallel.

Mungindi is located 751 km north of Sydney via Muswellbrook and Narrabri. It is 121 km north-west of Moree and 509 km south-west of Brisbane.

The town's name is a version of a Kamilaroi Aboriginal word which either meant the name of the area or possibly "a place where sweet water can be found" or "water hole by the river". All can be seen as roughly equivalent.

Mungindi Hot Pool
Located in Bucknell Street the Mungindi Hot Pool proudly declares that you are "Surrounded by soothing mineral-rich water, feel the luxury of constantly flowing, naturally filtered water as you experience this tranquil country environment." The Artesian Bore was drilled at Mungindi in 1996 to a depth of 1037 metres and the thermal water from the Great Artesian Basin flows into the 5.8m x 3m pool which remains at a constant 38°C. The complex also has a 33 m pool and a children’s wading pool. The opening hours vary between the summer and winter month.

History Park
On the eastern outskirts of town, as you enter from Moree, is the large History Park which has an extensive collection of old farming equipment collected from the surrounding area. It is easy to see many of the exhibits but if you want entry the key is available from the business over the road. There are instructions on the gate.

One Ton Post
Located 8 km west of Mungindi on the Carnarvon Highway is the One Ton Post. This marker is surveyor John B Cameron's famous surveyor peg which marks the eastern end of the 431 miles (700 km) long fence which divides New South Wales from Queensland along the 29th parallel. The One Ton Post is the original survey peg. It also marks the end of the two year task of surveying the border from Cameron Corner to the Barwon River. The first section ran from Cameron Corner to Barringun and the second section ran 199.5 miles (321 km) east from Barrigun to the Barwon River. The One Ton Post was placed on the west bank of the Barwon River near Mungindi to mark the end of the survey in October 1881. The sign at the marker (which is almost certainly the largest survey marker in the country) reads: "The absolute determination of the 29th parallel was begun in 1879 when surveyors George C Watson from Qld, and John B Cameron from NSW met at Barringun. Moving west they experienced floods and droughts. These, coupled with disagreement with the younger Cameron, caused Watson to withdraw at the 100 mile post. However Cameron persevered to reach the South Australia Border some 12 months later. The survey east from Barringun was much easier and he reached the Barwon at Mingindi in October 1881. To celebrate the conclusion of a very difficult survey Cameron cut and placed a one ton post on the bank of the Barwon River, three miles west of Mungindi. It still remains as a testatment of Cameron's achievement and is believed to be the largest wooden survey peg in Australia." The post is located on the bank of the Barwon River and nearby is "The Fencers Hut", a corrugated iron shed with historic implements used to construct fences.

Neeworra Historical Site
Located 11 kms east on the Moree-Mundindi Road is the historic site of the Neeworra. A detailed sign at the site explains: "A few rusty tins, a handful of gravel on an old pathway and the memory of a once proud peppertree are all that now remains of an isolated wine shanty which was part of a little village called Neeworra. Its first name was Paradise - so named by a boatload of thankful people escaping from the 1890 flood. Paradise it must have seemed indeed as they disembarked at the sandhill not far from the site of the old Whalan Bridge. It was not long before houses and a wine shanty were built as this site was adopted as the official mail exchange station for the coaches operating between Moree and Mungindi. Paradise was first licensed for wine in 1898 and was operated by Herb Collier. Paradise continued until 1914 when, with the coming of the railway siding named Neeworra which was gazetted on October 1, 1913. This site, which is between the Moringa and the Kraal turnoffs soon boasted a Station Master's residence, ticket office, goods shed and trucking yards. Following this, six residences, a small school and the Post Office store and Wine Shanty were built. The shanty was built by Jim Dawson and was rented then for One British pound per week. Paradise gradually disappeared, and only Neeworra remained as the hub of activity for the area. About 1938 when electric power and reticulated water came back to Mungindi, all the inhabitants moved there and the Neeworra village slowly disappeared. The school was taken to Garah for use there in about 1939. The wine shanty, railway siding and trucking yards then remained. In its heyday the shanty with its mechanical petrol bowser and peppertree, catered for the many wants and needs of the local station people and travellers alike. Although the liquor license was for wine only, there were rumours many bottles of ale were consumed from kerosene refrigerators and from under wet bags. The Wine Shanty was burnt down on August 8, 1962. It is no longer a place for a quiet ale or chat. Nor is there any mail, groceries, petrol or telephone there. Time itself has removed those more tangible things but memories will keep alive that colourful and unique meeting place for a long time to come."
Today it is little more than the sign with a map of what the township used to look like; a quintessential Aussie dunny (check it out and get the joke); and a few remnants of sheds. A reminder that all things must pass.

Thallon Grain Silos - The Watering Hole
Located at Thallon, 40 km north of Mungindi, the Thallon Grain Silos were built in the 1970s and now are one of the largest grain delivery sites in the country. They processed 29,000 tonnes of grain in 2016. The mural painted on the four silos "showcases icons of the district in the Moonie River and one of the area's amazing sunsets. It also recognises members of Thallon's indigenous community by the inclusion of a scarred tree and celebrates the area's agricultural base. The sign at the viewing platform explains "The design titled The Watering Hole was developed by artists Joel Fergie (The Zookeeper) and Travis Vinson (Drapl) in consultation with the Thallon Community. The striking image takes inspiration from the works of three local photographers. Chantel Mcalister's First Light, The Moonie River by Lila Brosnan and Gary Petrie's shot of two pale faced rosellas."

* Prior to the arrival of Europeans the area was occupied by people from the Kamilaroi Aboriginal language group.

* The first European to pass through the area was escaped convict George Clarke who lived among the Kamilaroi people between 1826-1831.

* When Clarke was recaptured in 1831 he told of a vast inland river called Kindur and Sir Thomas Mitchell was sent to investigate the claims.

* Mitchell reached  the Barwon River south of present-day Mungindi during his 1831-1832 expedition.

* Mitchell reported favourably on the pastoral prospects of the area which prompted squatters to settle in the area in the 1830s.

* By 1846 when Mitchell returned to the area he could report that there were squatters in the district.

* By the 1850s stock were fording the Barwon River near the present site of Mungindi.

* In 1863 a formal stock route was established from St George to Mungindi. That year an inn was established on the southern bank of the Barwon. It was known as Walker's Hotel.

* In the 1860s a surveyor named Alexander Grant Walker had identified the area and named it Mogindi. He subsequently stayed and ran both the local hotel and the post office.

* In 1867 the Queensland postmaster for the town was given jurisdiction over mail from New South Wales.

* In 1878 Alexander Walker, known as the Founder of Mungindi, died.

* The town was laid out in 1880 by surveyor Robert Matthews.

* In 1882 a policeman arrived to establish law and order on the New South Wales side of the border.

* In 1888 blocks of land on the New South Wales side of the border were offered for sale.

* In 1891 the people on the Queensland side of the border petitioned the colonial government for a policeman.

* The last Kamilaroi corroboree took place in the district in 1895.

* By 1900 the town had its own newspaper, a hospital, a doctor, a solicitor, two schools, two post offices, a brewery, at least four hotels, two police Stations with three men stationed at each, two race clubs, a P & A Society, two butchers, two hairdressers, two dress makers and milliners, a shoemaker, a saddler, a baker, a tailor, a saw mill, a pawnbroker, a teacher of pianoforte, violin and oil painting, about four contract carpenters, a housepainter a decorator, a bricklayer, and a tinsmith.

* In the summer of 2012/2013, dubbed The Angry Summer by the Climate Commission, the temperature in Mungindi reached a new recorded high of 46.8°C.

There are useful local websites. Check out https://mymungindi.com.au. Also Moree has information check out http://www.moreetourism.com.au/mungindi.html. 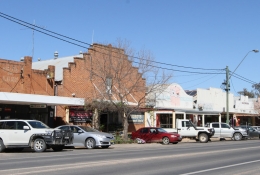 The main street of Mungindi on a Saturday morning. 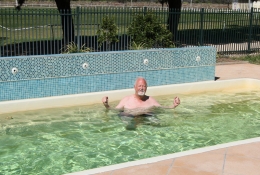 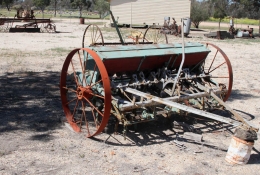 Old farm equipment in the yard at the Mungindi History Park. 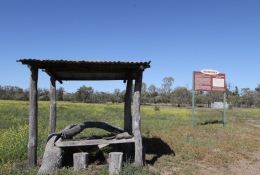 The non-existent town of Neeworra. 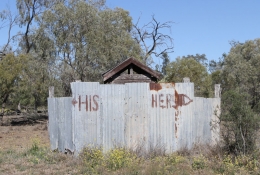 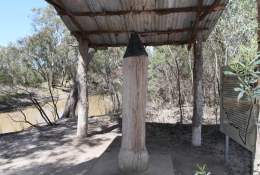 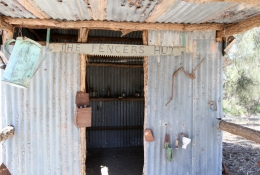 The Fencers Hut, with old fencers equipment, beside the One Ton Post 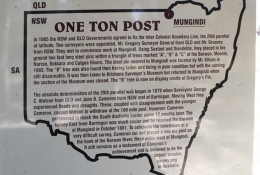 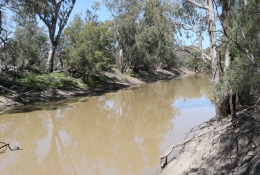 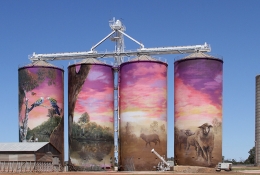 The grain silos at Thallon