Murchison is a genuinely charming and very pretty small town located on the banks of the Goulburn River. Its primary appeal lies in the superb Meteorite Park which runs along the river, boasts a delightful riverside walking trail, is full of 'cow' statues (what a brilliant idea - and some of them are amazing) and is directly opposite a good bakery with excellent coffee and pastries. It also has a genuinely fascinating cemetery with both an Italian War Memorial and the grave of an important local Aborigine.

Murchison is located 161 km north of Melbourne, via the Hume Freeway and Goulburn Valley Highway, between Seymour and Shepparton.

When the town was surveyed in 1854 it was named after a Captain John Murchison.

The Cow Statues
There is something quite inspirational about a small town which comes up with the eccentric idea of populating the main riverside park (Meteorite Park) with artistically painted cows. These are not just ordinary cows. One is so cleverly painted you would think it had been wrapped in sheets of metal armour; another expresses 'gratitude' in a dozen different languages; yet another is covered with a map of the world. They are quirky and artistic and great fun.

Murchison Italian Ossario - War Memorial and Chapel
What did Australia do with Prisoners of War and enemy aliens during World War II? Many of them were sent to prison camps in the Goulburn Valley. An estimated 4,000 Italian, German and Japanese POWs were detained at Murchison. A number of them died and were buried in the local Murchison cemetery but major floods in 1956 did serious damage to the graves and so Luigi Gigliotti of Kyabram, deciding to rectify  the situation, persuaded local Italian families to pay for the construction of an Italian mausoleum. He raised £25,000. The mausoleum was completed in 1961 and Gigliotti managed to convince the authorities that all Italian POWs and internees who had died in Australian prison camps should be interred the mausoleum. It is built of Castlemaine stone, has an altar of white Italian marble, and Roman roof tiles. The path to the building is lined with Mediterranean cypresses. Each year, on the nearest Sunday to Armistice Day, mass is celebrated before a large gathering.

Churches
Drive or walk along Impey St and you'll find the town's three churches all within walking distance of each other and all dating from the 19th century. There is the Uniting (previously Presbyterian) Church (1878), Christ Church, the Anglican church (1884) and St Brigid's Catholic Church (1900).

Dhurringile Mansion
In 1877 the wealthy pastoralist John Winter built Dhurringile, a 65-room mansion. He sold it to the son of Rolf Boldrewood (the Robbery Under Arms novelist) Everard Browne in 1907. It was used during World War II for the detention of German officers and today is a low-security prison. It can be seen adjacent Tatura Road some 11 km north of town.

Tatura Museum
Tatura, which means 'small lagoon' in the local Aboriginal language, is located 22 km north of Murchison. It is home to the unusual Tatura Irrigation & Wartime Camps Museum. During World War II there were seven camps holding between 4.000 and 8,000 people in the Goulburn Valley. Three of the camps housed POWs and the remaining four camps held internees. Of the internee camps, Camps 1 and 2 were near Tatura and held mostly German and Italian single males; Camp 3 near Rushworth held mostly German families; and Camp 4 held mostly Japanese families. Each housed around 1000 internees. The sites are all now on private land and not open for inspection.

The POW camps at Dhurringile Mansion were for German officers and their batmen. Camp 13 near Murchison held 4,000 POWs - mainly Italians and Germans. Camp 6 near Graytown which Italian, German and Finnish POWs.

An official German War Cemetery located next to Tatura Cemetery in 1958. The Tatura Museum has details of every person buried there. The museum is located in the original Walter Scott Murray building, known as the Rodney Irrigation Trust building (1888), which was where the Goulburn Valley Irrigation scheme was developed.  The museum is located in Hogan Street, Tatura, is open 1.00 pm-3.00 pm weekdays and 2.00 pm-4.00 pm on weekends. Contact (03) 5824 1867 for more information. A downloadable brochure is available. Check http://www.taturamuseum.org.au/Tatura%20Museum%20Brochure.pdf

* Before the arrival of Europeans the Ngooraialum Aborigines lived along the Goulburn River. By 1840 there were around 200 Aboriginal people living in the area.

* In 1836 Major Thomas Mitchell became the first European into the area. He crossed the Goulburn River 38km to the south at a crossing which became known as Mitchellstown.

* In 1838 two drovers, Joseph Hawdon and Charles Bonney, overlanding sheep and cattle from Mitchellstown to Adelaide, probably passed through the present site of Murchison.

* The settlement was created in 1840 as the Goulburn River District Aboriginal Protectorate. A school was built at the crossing and by 1841 a local native police force had been created. Around this time, and throughout the 1840s, squatters started settling in the district. The Protectorate was closed in 1850.

* In 1850 a French wine maker, Ludovic Marie settled at Murchison, and started growing grapes. He built a hotel and developed a punt service across the river to meet the increasing demand from gold prospectors travelling through the district from Bendigo and Beechworth. The rates were one shilling for a person and five shillings for 100 sheep.

* A township, the first in the Lower Goulburn Valley, was surveyed and named in 1854 and allotments were auctioned. The following year a post office was built, a flour mill was in operation by 1858, and a school was completed in 1859.

* Serious settlement along the Goulburn River occurred throughout the 1860s and 1870s.

* A  timber bridge replaced Marie's punt service in 1871. A local newspaper appeared in 1873 and the following year a courthouse and mechanics institute were built.

* By 1875 the first paddlesteamer reached the town which had grown to include six hotels, a number of general stores, two flour mills, a post office, a sawmill, cordial factory and two blacksmiths.

* In 1878 the Murchison police station enjoyed a brief moment of notoriety when it became the base for operations against Ned Kelly and his gang.

* The railway reached Murchison East in 1880.

* In 1937 the old timber bridge was replaced by a new steel bridge which is still standing today.

* Between 1941 and 1947 some 4,000 POWs were interned at Murchison. By 1942 the POW camp was employing 675 people, including 64 officers, to guard the prisoners. By 1943 the Italians and Japanese, who were regarded as reliable workers, were picking fruit and cutting wood.

* The town was struck by a meteor shower in 1969. Fragments of the rarest known type of meteorite fell over a wide area accompanied by explosions and blinding flashes of light.

Murchison does not have its own visitor information centre but information about the town and its attractions can be obtained from Shepparton's Visitor Information Centre, tel: (03) 5831 4400 or free-call (1800) 808 839.

Check out http://www.discovershepparton.com.au/pages/murchison for additional information. 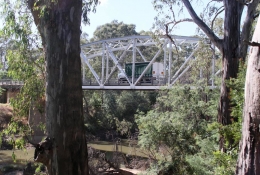 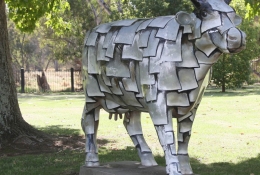 One of the many cows in Meteorite Park 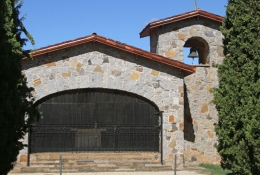 Italian Ossario at the Murchison Cemetery 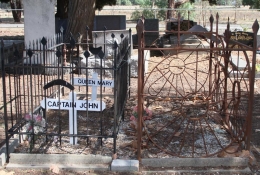