The tiny township of Murgon is more famous for its proximity to the famous Aboriginal reserve, originally known as Barambah Aboriginal Reserve and today known as Cherbourg, than for any specific attractions it may have. The town itself has an unusual Dairy Industry museum. The median strip in the main street is named in honour of Flo Bjelke-Petersen (Queensland's well-known pumpkin scone cook and wife of a former state premier) and there is a sign announcing that it is the home of Australia's champion cheese. In the 1980s, when Joh Bjelke-Petersen was the Premier of Queensland, the town proudly announced 'Come to Murgon - Gateway to Joh's Country'. It is entirely appropriate that nearby Goomeri holds a Pumpkin Festival each year.

Murgon is located 321 m above sea-level and 249 km north-west of Brisbane via the Burnett and D'Aguilar Highways and Pacific Motorway.

The Queensland Dairy Industry Museum
The Queensland Dairy Industry Museum is open from 9.30 am - 12.30 pm daily and is located at 2 Sommerville Street off Gayndah Road. It is a record of the district's long history of dairy farming with displays including an old milking machine, a working three-bail dairy circa 1940, separators, milk and cream cans, butter boxes, laboratory displays and equipment used for making cheese and butter. There is also a lapidary display.

Cherbourg Aboriginal Community
The Cherbourg Aboriginal Community is located 5 km from Murgon and clearly signposted. It was established in 1900 and over the next five years, as part of the Queensland Government's segregation policy, Aborigines from 21 different language groups were forced to live together, including the remnants of the decimated Aborigines of Fraser Island. It was officially gazetted and established as Barambah Aboriginal Reserve in 1904.
It is a comment on the resilience of these abused and maltreated people that they have managed to work together so that now the town, with a population of nearly 2,000, is regarded as a genuine Aboriginal success story. The name of the settlement was originally intended to be 'Chirbury' but over the years it changed to 'Cherberg' and then in 1931 it was formally renamed 'Cherbourg'.
In recent times Cherbourg has produced a string of talented rugby league footballers including Steve Renouf (who played for Australia), Chris Sandow and Willie Tonga. Cherbourg's most famous son was Harold Blair (1924-76) who, as a singer, music teacher and human rights supporter, worked tirelessly to promote Aboriginal causes. He established the Harold Blair Aboriginal Childrens' Project which took children from missions and reserves and gave them holidays in Melbourne. He was widely respected both as a singer and as a fighter for the rights of Aborigines.
Another legendary local was the great Eddie Gilbert, a fast bowler who famously in 1931 dismissed Don Bradman for a duck after his first ball had knocked the bat from the famous batsman's hands. Bradman would later describe Gilbert as "unhesitatingly faster than anything seen from Larwood or anyone else."
Cherbourg is a community of remarkable self-sufficiency with a successful dairy farm, an active town council, a hospital, a regional medical centre, a rehabilitation centre, a cafe (the Yurri Muntha - see http://www.ymcafe.com.au), a cultural precinct which can be visited Monday to Friday from 9.00 am - 4.00 pm, the Bralbin Minya Pastoral Company, the Cherbourg Joinery which produces quality kitchens, bathrooms and office furniture, and, most interestingly, an Emu farm. There are conducted tours which take approximately 30-45 minutes. Check out http://www.tjuringa.com.au/pages/Tours.html for details. The great appeal of the emu is that it can be used for its skin and its feathers, its eggs can be carved, its oil can be extracted, its meat - a delicious red meat which is like beef but has less than one per cent fat - is a delicacy, and the animals are an obvious tourist attraction. The community also produces boomerangs, spears and Aboriginal art, all of which are for sale.

Goomeri
Located 19 km east of Murgon is the small township of Goomeri. It was established in 1902 when the railway line arrived. About 12 km out of the town are the beautiful Kinbombi Falls with a 200-step walk to the pool at the bottom. It is also the site for the annual Goomeri Pumpkin Festival which is held on the last Sunday in May with a range of wacky pumpkin competitions - the Pumpkin Power Shot Put, the Pumpkin Pull (it involves pulling a sled of pumpkins), the Great Australian Pumpkin Roll (yes, rolling a pumpkin down a hill - but you have to bring your own pumpkin). Check it out in detail at http://www.goomeripumpkinfestival.com.au.

Boat Mountain Conservation Park
Located 13 km north-east of Murgon (follow the signs from Gore Street and Boat Mountain Road), Boat Mountain Conservation Park is a small park which is described by Queensland's Department of National Parks as a "distinctive flat-topped ridge shaped like an upturned boat is covered in dry rainforest and open eucalypt woodland. At 589 m, Boat Mountain is a local landmark in the Murgon area and the headwaters of four creeks. Most of the vegetation was originally hoop pine rainforest but now is a mixture of softwood scrub and vine thicket following logging. More than 130 plant species grow here including rare plants. Common trees include the small-leaved tuckeroo, white tamarind, leopard ash and native holly. The park also contains grassy open eucalypt woodland with stringybarks and grey gums."
The activities in the park include picnics with pleasant views, walks to two lookouts and bird watching where it is possible to see "at least 46 species of birds including rufous whistlers, black-faced cuckoo-shrikes, double-barred finches, red-backed wrens, honeyeaters, fantails, doves and pigeons. You might also see black-striped wallabies and echidnas by day or pygmy-possums and sugar gliders at night. See the dish-shaped depressions on the track made by the black-breasted button-quail as it spins around feeding. Bandicoot diggings can be seen along the track." Check out http://nprsr.qld.gov.au/parks/boat-mountain/index.html which also has a species list for the conservation park.

* Prior to European settlement the area was inhabited by members of the Waka Waka Aboriginal language group.

* In 1843 European settlers named Ferriter and Uhr took up land in the district which they called 'Barambah'. They started by grazing sheep but eventually changed to cattle.

* In 1905 a house was built on Barambah Station with a wide veranda and an hexagonal corner pavilion. It is not open to the public but is listed by the National Trust.

* In the early years of the twentieth century the Barambah Aboriginal Reserve was established by the Queensland Government as a result of its policy of segregation of Aborigines from the European community.

* In February, 1901 the Salvation Army took control of the reserve. It was a recipe for disaster as over 20 different language groups were gathered from over 100 areas, thrown together in the reserve, and forbidden to speak their own languages.

* In 1904 Barambah was officially gazetted as an Aboriginal reserve

* Development of Murgon did not occur until the large properties in the area were broken up and there was a sale of town lots in 1906.

* In 1931 Barambah was officially renamed Cherbourg.

* Today the town is a quiet rural service centre.

There is a useful local website. Check out http://www.murgon.net.au/. 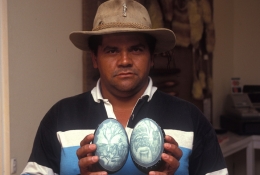