Today Murringo is so small that a visitor could pass through without stopping. It is a remnant of a bygone era with two handsome churches which are a reminder of the deeply religious nature of rural Australia in the nineteenth century.

Murringo is 354 km south-west of Sydney via Goulburn and Yass and 370 km via Bathurst and Cowra.

Since the town was laid out by surveyors in 1849 it has been variously known as Meringo, Marringa, Muringo, Murringo, Maringo, Maringa and Marengo. It has been suggested that the origin of the name was a property in the area called Marengo, probably after the famous Napoleonic Battle of Marengo. In 1926 the local post office changed its name and the village became Murringo.

Christ Church Anglican Church
Although it is now a small church beside the main road back in 1865 Christ Church Anglican Church was in the minds of the local Anglican community. In order to build the church Reverend Soares, the local clergyman, held a tea meeting and raised the staggering sum of £200. That is the equivalent of more than £1 for every town resident. Reverend Soares designed the church. The foundation stone was laid on 28 March 1866 and the church was consecrated on 7 December 1866. Services now only occur on the second Sunday of each month at 8.00am.

Sacred Heart Roman Catholic Church
Not to be outdone the local Catholic community decided to match the Anglican church and so in 1871 a collection was taken up at Michael O'Connor's hotel. Tea for Anglicans? The local pub for the Catholics? Such was the fund raising success that in 1874 the foundation stone for the Sacred Heart Catholic Church was laid. Some years later a convent school was attached to the church.

Young
No comprehensive understanding of the goldrush days in New South Wales is complete without  a visit to the nearby township of Lambing Flat, now known as Young.

Murringo is important because it is a genuinely historic village where very little has changed over the past century.

* the Murringo area was first settled in 1827. It was one of the first settlements beyond the Blue Mountains.

* the Marengo Station, which was established around 1833, had 21 people working for it by 1840. A survey in that year showed that 43 people were living on three properties. In 1849 a government survey planned a town around Marengo Station. The plans included a cemetery, a market place and a public park but this came to nothing when, in 1860, gold was discovered at Young (known at the time as Lambing Flat) and the population moved. In 1861 there were 128 residents in Murringo. By in 1871 there were only 119.

*In the 1860s, bushrangers used small towns like Murringo as suitable places to hideout from the troopers who scoured the area trying to stop them. Equally there were gold prospectors - wild men dreaming of making their fortunes - wandering through the area trying to find the next place where nuggets would be easily found. A newspaper article at the time described Murringo as  'a public thoroughfare and rendezvous for horse stealers and bushrangers, being in the very heart of the lawless district'.

For more information check out http://www.young.nsw.gov.au/culturalmap/places/murringo/murringo.htm 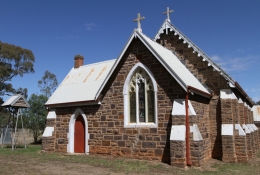 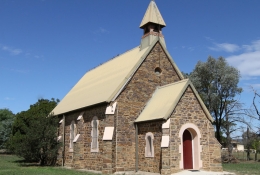 Christ Church - the Anglican church in Murringo built in 1866.