Murrumbateman is hardly a town. It is a few shops, a hotel, an historic school and a pleasant park on the road between Canberra and Yass. The appeal of the area is the large number of cellar doors and vineyards. This is a town at the heart of the Canberra district's rapidly growing cool climate wine region.

Murrumbateman is located 286 km south-west of Sydney via the Hume Motorway. It is 20 km south of Yass via the Barton Highway and 39 km north of Canberra.

No one is sure what the word meant in the language of the Ngunawal people. It is known that there was a property named Murrumbateman Station and the town takes its name from this. The local Ngunawal language has "murra" meaning "hand", "murun" meaning "alive", and "murrin" meaning "man" but there is no explanation for Bateman although one local wit insists that the town's name comes from a regular customer ordering rum from a Mr Bateman at the local pub and calling out "More rum, Bateman."

Exploring the Local Wineries
This website does not pretend to any level of expertise in wines. Therefore the visitor who wants to explore the vineyards around Murrumbateman (and there are 13 listed on the Makers of Murrumbateman website) should explore the detailed http://www.makersofmurrumbateman.org.au which also includes information about local chocolate makers, guest houses and a honey and mead maker. In most instances it directs the visitor to specific websites relating to specific wineries.

The Old School House
One of the town's few historic buildings is the old schoolhouse (1872) which has remained largely unaltered and is now used by the local Historical Society. It is located on the Barton Highway that runs through the town.

* Prior to European occupation the local Aboriginal population was mainly the Ngunawal people.

* In 1821 the explorer Hamilton Hume and his party became the first Europeans to reach the Yass Plains. Hume returned with William Hovell in 1824 on his expedition to Port Phillip Bay.

* By 1825 a bush track joined the Goulburn and Yass Plains.

* Gold was discovered in the area in the 1850s. It was found near Nanima, east of Murrumbateman.

* Gold was a very small operation. In 1861 there were about 18 Europeans and 30 Chinese working the Nanima field.

* In 1882 an important figure in Australia's wool industry, Sir Walter Merriman, was born in the district. He was subsequently educated at Murrumbateman Public School.

* In 1972 Sir Walter Merriman was buried in the Murrumbateman cemetery.

There is a useful local website. Check out http://www.murrumbateman.org.au/index.htm. 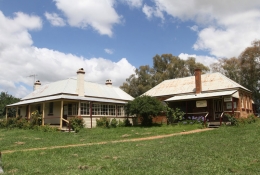 Murrumbateman Public School (1872) now a Library and the Schoolmaster's Residence. 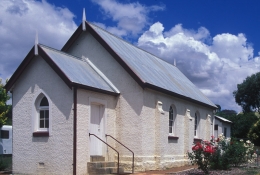 The tiny community church at Murrumbateman.