Wheatbelt town in the Wimmera.

Murtoa is a small wheatbelt town in the Wimmera. It is notable for its wide streets, its interesting 19th century buildings, the charming Lake Marma and its importance as a major historic grain receival centre.

Murtoa is located on the Wimmera Highway 295 km north-west of Melbourne via Ballarat and Stawell  and 140 m above sea-level.

Prior to 1870 the town was known as Marma Gully. It is generally accepted that Murtoa means 'home of the lizard' in the language of the local Aborigines, probably the Jaadwa language group. There are a number of large lizard mosaic sculptures on the median strips in Marma and Duncan streets.

Lake Marma Reserve
Drive through the narrow, but impressive, Memorial Gates (1920) and you enter the Lake Marma Reserve, a  20ha lake which was once the water source for the first settlers and is now a pleasant parkland known for its birdlife and its easy 2km walking track. It lies close to the heart of the town.

Water Tower Museum
Standing out prominently at the end of Comyn St is the Water Tower Museum. The building, a thirteen-metre high water storage tower was built in 1886 by the Victorian railways. It houses a remarkable collection of 500 birds and animals from the taxidermy collection of James Hill. He collected the animals from 1885-1930. There is also a collection of local Aboriginal artefacts. Check the door for the relevant phone numbers of people who will open the museum for inspection.

Concordia College
The German Lutherans who settled Murtoa were a vital part of the town's early history. So important were they that a Lutheran school opened in the town in 1887 and three years later it was turned into a training college for Lutheran teachers. In 1892  'Concordia College', a training facility for teachers and pastors, was built. Part of the old building with some important Lutheran historical artefacts is located adjacent to the water tower.

Stick Shed
Across the railway line and to the south-east of the town is the remarkable Stick Shed which was built in 1941 from over 540 unmilled mountain ash tree trunks. It has become a tourist attraction as it is  270 metres long, 60 metres wide and 19 metres high. It was built to store grain during World War II.

Lizards on the Strip
Around the town are a number of huge lizards (they refer to the Aboriginal meaning of the town's name) covered with ceramic tiles. They were part of a project instituted by the students of Our Lady Help of Christians School. The work was supervised by artist Steve Monk who designed, carved and built the lizards.

Barrabool Forest Reserve
Located 7km south of Murtoa on the road to Stawell, Barrabool Forest Reserve not only has fine displays of wildflowers in the spring but if you look carefully you will notice a number of trees where, in the nineteenth century, the Jaadwa cut the bark. See http://www.murtoa.net/tourism for a good photographic example.

* Prior to European settlement Aborigines from the Jaadwa language group lived and moved through the area.

* The first European to explore the area was Major Thomas Mitchell who travelled through the district in 1836. It was largely as a result of Mitchell's eulogy to the richness of the land that squatters took up runs in the early 1840s.

* in 1862 Longerenong was purchased by Irish-born politician and pastoralist Sir Samuel Wilson, known as Bullocky Sam, who developed an elaborate scheme of dams and channels to water the land. His two-storey 1862 homestead west of the town, Longerenong Homestead, has been described as 'the finest Gothic villa in western Victoria'. It is a private residence but can be seen from Burnt Clay Road. Over the next decade his holding increased in both Victoria and NSW and by 1879 it was estimated that he owned 600,000 sheep - more than any other man in the world. He eventually owned all of the land around Lake Marma.

* The Land Act of 1869 saw much of the land around Murtoa broken up into 320 acre (130ha) blocks and this resulted in an important migration of German dry-climate wheat farmers from the Mount Gambier area of South Australia. The first party of four German farmers arrived in the district in 1871 and returned to settle permanently the following year.

* Samuel Wilson did not want a town in the area and he managed to have it delayed until around 1873 when Murtoa, known at the time as Marma Gully, was officially surveyed. Through the 1870s a number of community buildings were constructed. In 1873 a building made from mud and reeds from Lake Marma was used as both a Lutheran church and a school. By 1875 it was taken over by the Victorian Board of Education. Two years later it was replaced by a proper school.

* The local post office opened in 1874. In 1876 a flour mill was established and in 1877 the police arrived and the Lutherans built St John's church. The railway reached the town in 1879 and it became the primary Wimmera railhead for wheat.

* Between 1909-1939 the town had its own freezing works where lamb was processed for export to London.

* Today Murtoa, which handles 500,000 tonnes of grain a year, is the largest grain handling facility in Victoria.

There is no official visitor information centre. 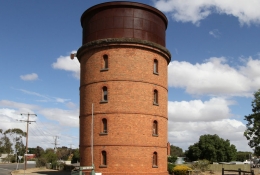 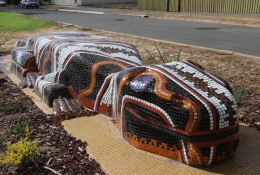 One of the many lizards around Murtoa - this is in Duncan Street. 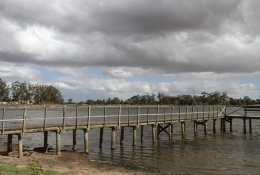 Lake Marma Reserve and the jetty.