Where the famous fossil of a Muttabuttasaurus was found

Muttaburra is famous as the site of the discovery of the Muttaburrasaurus, one of Australia's largest dinosaurs. It also lies at the heart of one of Australia's most daring thefts - the stealing of 401 head of cattle from Bowen Downs Station by the legendary Harry Redford. A legendary exercise in cattle duffing.

Muttaburra is located 1,223 km north west of Brisbane via the Warrego Highway. It is 85 km north-west of Aramac and 122 km north of Longreach.

Muttaburra takes its name from a local Aboriginal word meaning "the meeting of the waters".

The Sculptures
Muttaburra is a wonderland of sculptures as the result of the Muttaburra Sculpture Festival. One of the ways to explore the diversity of sculptures is to simply walk around the town and explore - in the park at the entrance to town there are the "Rhythm of Life" an image of two brolgas by Milynda Rogers; there are also some dinosaurs in the same park; and the much photographed 'Our Shearer" by Andrew Whitehead which has been made entirely out of farm tools. The amusing "130 Years of Schooling in Muttaburra" by Milynda Rogers is also in the park; 'Goanna' is in the main street; and "Lady and Child" is in the park near the Post Office on Edkins Street.

Remembering Harry Redford and the White Bull
In Queensland in the 1870s bushcraft, courage and delivering a bloody nose to the owners (“toffs”) of the new, and huge, cattle stations was seen as an heroic and noble endeavour worthy of admiration, not censure.
Harry Redford who, less than a decade after Burke and Wills had so comprehensively lost their way in western Queensland, stole 100 bullocks, 100 cows, 100 heifers, 100 steers and one white bull from Bowen Downs Station and drove them down the Cooper Creek and into South Australia. The area upon which modern-day Muttaburra stands was at one end of this vast holding.
It was an extraordinary achievement which Rolf Boldrewood later used as the basis for his novel Robbery Under Arms and the main character Captain Starlight. In old age people used to refer to Redford as “Captain Starlight”.
The only problem with the achievement was that none of the cattle belonged to Redford. While working on Bowen Downs this enterprising son of a convict (he was born near the Hawkesbury River in 1842 and was a huge man who stood over two metres tall) realised that Bowen Downs, which was running around 70,000 head on 1.75 million acres, really wouldn't miss 401 cattle.
His only mistake was the white bull. He needed it as the leader but it was very distinctive and easily identifiable.
Redford drove the cattle 1300 km through marginal desert country down the Cooper Creek to the Blanche Water station in northern South Australia where he sold them for £5000.
However the disappearance of the white bull was noted and in February 1871 Redford was arrested and brought back to Roma to be tried.
From the outset the trial was more entertainment than serious investigation. Locals, captivated by Redford's consummate bushcraft and daring, packed the courtroom. The white bull stood in a yard outside the courthouse. Forty-one of the forty-eight people called as possible jurors were dismissed because they were prejudiced. The white bull took part in a bovine line up with twenty other bulls and was immediately identified by its owner.
The evidence against Redford was overwhelming. The defence offered no witnesses and complained that Redford had been gaoled without trial. The jury retired for an hour and then delivered their verdict.
The court transcript reads:
Judge: What is your verdict?
Foreman of the Jury: We find the prisoner 'Not Guilty'.
Judge: What?
Foreman of the Jury: Not guilty.
Judge: I thank God, gentlemen, that the verdict is yours, not mine!
After his acquittal Redford headed into northern Australia where, by the 1880s, he was managing the famous Brunette Downs station.
As for Roma, well the verdict so outraged the legal establishment that it is effectively banned the town from holding "trials by jury" because it was felt that the locals could not be trusted to punish criminals they admired.
After his acquittal Harry Redford headed into northern Australia. He worked as a drover on the Atherton Tableland and around the Gulf country. In 1883 he moved the first herd of cattle from Queensland to the Brunette Downs station where he was appointed manager. For many years he oversaw the McArthur River station on the Gulf of Carpentaria and was known around Burketown as the model for Boldrewood's Captain Starlight, although he refused to acknowledge the obvious similarities.

* Little is known about the area's original inhabitants although they were probably members of the Iningai language group.

* The area was first explored by Europeans and settled in the 1850s.

* Bowen Downs station was established in 1862.

* In 1870 Harry Redford stole 400 head of cattle from Bowen Downs station and overlanded them down the Cooper Creek to South Australia.

* The town of Muttaburra developed in the 1870s.

* In 1878 Muttaburra was officially declared. 46 allotments were offered for sale at £1 an acre.

* A local hospital was built in 1884 with funds raised by the local community. A school opened that same year.

* In 1963 Doug Langdon found the first Muttaburrasaurus on his property.

* The Muttaburra Hospital closed in 1974. 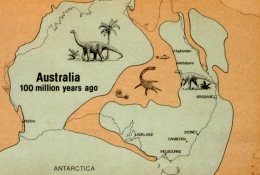 This map shows how the whole of western Queensland was under water 100 million years ago. 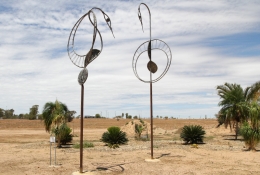 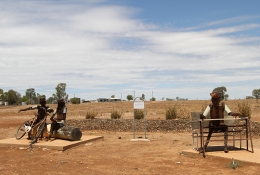 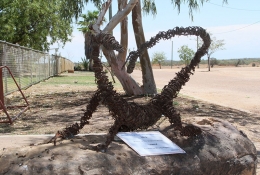 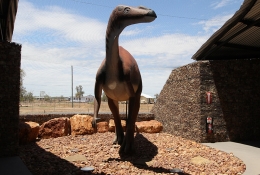 The statue of Muttaburrasaurus in the dedicated viewing area 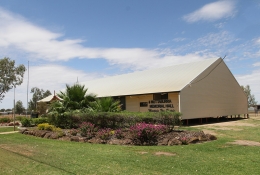 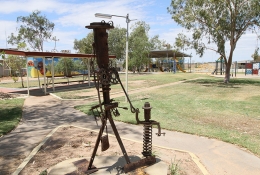 Lady and Child in the town park on Edkins Street 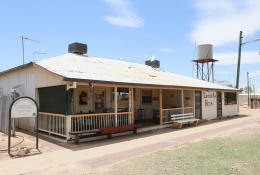 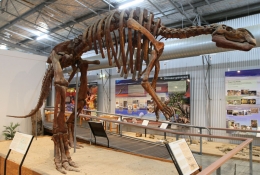 The plastic replica of the Muttaburrasaurus made by Paul Stumkat in the late 1980s - now in the Flinders Discovery Centre at Hughenden.