Mylor is one of those small, quiet villages in the Adelaide Hills where people retreat to enjoy the coolness of the mountains  and the unique Australian bushland beauty of the area. Its great attraction is the Warrawong Sanctuary, a superb ecological parkland where a high fence protects small native animals for such predators as feral cats and dogs.

Mylor is located 27 km south-east from Adelaide via Stirling.

Mylor was proclaimed in 1891 by the Acting Governor of South Australia, Sir James Bocaut. He named the village after his birthplace in Cornwall.

Warrawong Sanctuary
Warrawong Sanctuary started as a unique experiment instigated by the wildly eccentric, and hugely entertaining, environmentalist, Dr John Wamsley. The aim was simple: create a fenced, protective environment where small native animals could live in peace away from the predations of feral cats and other aggressive, carnivorous animals.
Wamsley, a Ph.D in mathematics who was lecturing at Flinders University, became famous for his stand against feral cats. Famously, he turned their skins into both a huge 3 metre by 4 metre rug (which was prominently displayed at the sanctuary) and a 'Davy Crockett' style hat.
He articulated his environmental position with great clarity and passion: "Of all mammals to become extinct in the last 200 years, half have been Australian. The last 150 years has seen the known extinction of 32 mammal species from South Australia. Twenty species of Australian mammal now live in numbers considered by world wildlife standards, too low to survive."
Wamsley argued that the primary reasons for this decimation were:
(i) that the original settlers and naturalists did not realise that most Australian mammals are nocturnal. Therefore there was a great ignorance about the small mammals which sleep during the day and forage during the night.
(ii) that feral animals were the greatest danger to small indigenous mammals. He had a particular and passionate hatred of the domestic cat who had became a highly efficient killing machine when freed from domesticity.
He turned his hatred of feral cats into an international controversy. In 2005 he told the ABC Landline program: "The cat hat was an interesting one. We were doing Yookamurra Sanctuary and eradicating cats, and a group of animal liberationists pointed out it was illegal to do anything about feral cats destroying my wildlife and they would take action against me if I did. So I had to change the law. Proo was there and Adam O'Neill who had been shooting handed me this wonderful cat skin he'd shot at Arkaroola Creek and Proo made it into a hat and put it on my head and we were going to a tourism awards night and I thought I'd wear it."
Dr Wamsley's wife Proo Geddes said: "It was my idea for John to wear the cat hat, but he was the one that wore it and then wore all the flack that went with it and that was very much the relationship."
"I knew exactly what newspapers had reported it, by where the death threats were coming from," Dr Wamsley said. "And it went on and on and on, it went several times around the world. People couldn't get enough. It changed the law. We can now shoot a cat on our sanctuaries even if it has a collar on and that's all we wanted to do."
In 1969 Wamsley purchasing Warrawong Sanctuary, building a fence that no cat could climb or get under, replanting the native vegetation, and developing a 15 hectare sanctuary for the protection of such delightful Australian nocturnal mammals as the bettong, potteroo, bandicoot, pademelon, quoll and hydromys.
The Sanctuary was also home to kangaroos and wallabies and he was hugely proud that a number of platypus had made Black Water Lake their home.
Wamsley expanded, formed a publicly listed company, purchased land for other sanctuaries - most notably Scotia (64,659 ha in the Murray-Darling basin on the NSW-SA border), Yookamurra (5,026 ha between the Barossa Valley and Murray River in South Australia), Buckaringa (2,085 ha in the Flinders Ranges) and Dakalanta (13,607 ha on the Eyre Peninsula) - but it all went horribly wrong and the whole enterprise collapsed in 2002.
Warrawong Sanctuary was abandoned in 2013 but in 2016 David Cobbold and Narelle MacPherson, who had owned the Peel Zoo in the jarrah forests of Western Australia, bought the sanctuary and since then they have slowly revitalised it.
Warrawong Sanctuary has always been an extraordinary ecological experience. There are dawn and evening conducted walks which need to be pre-booked and the Sanctuary is open from 10.00 am - 4.00 pm on weekdays and from 9.00 am - 5.00 pm on weekends and during school and public holidays.
The website explains that a visit: "includes the chance to see, and participate in, a wildlife presentations at 2.00 pm. These days also provide opportunities for visitors to pet and handle a range of Australian native animals. On weekends, school, and public holidays we also conduct Guided Tours at 11.00 am. Generally, on weekdays, there are no presentations. However, visitors can still walk the grounds of the Sanctuary at their leisure, taking in the natural wonder of the protected environment. The incredible bird life (over 100 birds visit the sanctuary) is testament to the value of feral-proof fencing and the resident platypus prove what's achievable with a "man-made" ecosystem. For more information check out https://www.warrawongws.com.au or tel: (08) 8423 6030. The sanctuary is located at 47 Stock Road, Mylor.

Mylor Walks
There is a small brochure titled Two Walks In And Around Mylor which can be downloaded at http://files.meetup.com/2689942/Mylor_Brochure.pdf. In this brochure local historian Tom Dyster, who's a member of the Mount Lofty Historical Society, outlines 16 places of interest around the village of Mylor including Goyder Reserve, Hack Bridge, the Old Bootmakers Shop and the Mylor Institute. There are useful maps but many of the places mentioned no longer exist.

The Heysen Trail
The 1,200 km Heysen Trail, which runs from Cape Jervis to Parachilna, passes through Mylor. A total of 21 km of the trail runs through the Adelaide Hills from Mylor to Cleland. Walkers pass through the parks and bushland of Bridgewater, Mt George Conservation Park, Mt Lofty Botanic Gardens and Cleland Conservation Park. For more detailed information check out https://heysentrail.asn.au/heysen-trail/sections/mylor-to-cleland.

* Prior to the arrival of Europeans the Peramangk Aborigines lived in the area.

* In 1838 Joseph Hawdon overlanded 300 head of cattle from Sydney through the area. The cattle saved the colony from starvation.

* In 1843 the first Hack Bridge was built across the Onkaparinka River.

* Mylor was surveyed in 1885. The plan was to break the area up into 20 acre blocks to be farmed under a bizarre scheme by a South Australian politician, G. W. Cotton. The plan was to provide the land to white collar workers who were settled on the orchards in the area. The idea was that they would work these 'waste lands' on their weekends.

* The township was proclaimed in 1891 by the Acting Governor of South Australia, Sir James Bocaut, who named the village after his birthplace in Cornwall.

* The first Wesleyan church service was held outdoors in 1892.

* In 1925 the Cotton Memorial Hall, now the Mylor Institute, was opened by Sir Thomas Fowell Buxton.

* In 1965 the current bridge across the Onkaparinka River was completed.

* In 1983 Warrakilla, home of the Surveyor General George Goyder, was destroyed by the bushfires which ravaged the area.

* In 1997 the Mylor Conservation Park was proclaimed.

* Today the village is a pleasant mountain retreat for retirees and commuters. 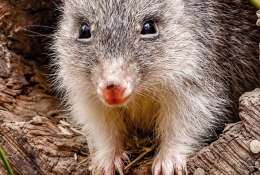 A Rufous Bettong at the sanctuary 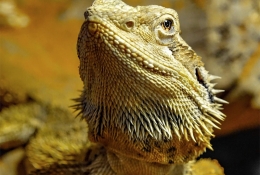 Prickle the Bearded Dragon at the Warrawong Sanctuary 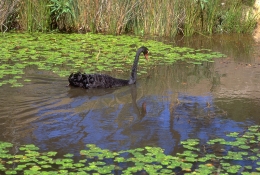 A black swan on the lake at Warrawong Sanctuary 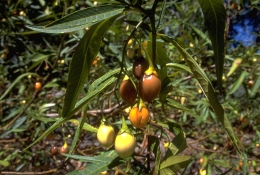 Bush tucker growing beside the lake at Warrawong Sanctuary