Service centre on the Great Alpine Road to the snowfields.

Myrtleford is a thriving agricultural town located in the Ovens River valley below the Mt Buffalo Range. The rich valley is the result of alluvial soils washed down by the Ovens River, Happy Valley Creek and Barwidgee Creek. It is a pleasant town surrounded by agriculture which, over the years has included tobacco, walnut trees, hops, grapes, chestnuts, asparagus and mint.

Myrtleford is located between Wangaratta and Bright on the Great Alpine Road, 296 km north-east of Melbourne. It is 223 m above sea-level.

When pastoralists arrived in the Ovens Valley in 1837 they named the local creek  Myrtle Creek because of the myrtle trees (probably tea trees) growing on the banks Subsequently a ford across the creek was used by prospectors travelling to Beechworth. It became became known, self-evidently, as Myrtleford.

Historic Log Tobacco Kiln in Rotary Park
Built by the Pizzini Brothers of Eurobin in 1957 this replica of a log tobacco kiln is typical of those built between the 1930s and 1960s when growing and processing of tobacco was an important part of the agricultural makeup of the area. There is a plaque beside the building, and a number of boards inside the kiln, explaining the history of tobacco farming in the valley. It records some remarkable statistics: in 2006 4 million kilograms of tobacco were produced by 135 growers of which 80% were of Italian descent. The industry employed 700 seasonal workers and generated $90 million for the local community. This was the last year of production in Australia.

The Phoenix Tree
Located on the Great Alpine Road, under a canvas cover, is the Phoenix tree, a huge sculpture created out of the trunk and roots of a river red gum from Barwidgee Creek by the sculptor Hans Knorr. It is a superb use of a dead red gum and, as a signboard explains, the tree is like the phoenix bird, rising for a new life out of its ashes. This, Knorr, argues is similar to the destruction and revitalisation of forests throughout the world.

Red Gum
Located in Smith Street and given a special place of importance is a giant old red gum which is 23.25 m tall and 9.2 m in circumference with a 28.75 m spread (those figures date from 2004). It used to be claimed as the largest river Red Gum in Victoria but the signage now says "in the district" and its age is estimated at over 200 years. It became a meeting place for local people after the railway reached Myrtleford in 1883.

Ovens River Loop Trail
Beginning at the Visitor Information Centre or Rotary Park, this 5.6 km flat track is a delightful walk beside the Ovens River and Happy Valley Creek. It is particularly delightful in spring and autumn when the trees along the trail are at their best. See http://www.greatalpinevalleys.com.au/pages/walks-and-trails/ for more details.

Historic Walk
This is a 1.8 km walk around the town observing 15 places of historic interest. It starts at the Old School Museum and includes The Big Tree. See http://www.greatalpinevalleys.com.au/pages/walks-and-trails/ for more details.

Discovery Trail
There are ten panels along this trail recording the early life of settlers and the daily life of the residents of Myrtleford and the Ovens Valley. See http://www.greatalpinevalleys.com.au/pages/walks-and-trails/ for more details.

Reform Hill
There are three trails around Reform Hill - (1) the Monument Track (1.6 km, 1 hour return) which includes views over the valley and an opportunity to see some remnants of the gold battery and tunnels in the hillside (2) the Mining Loop Track (1.1 km, 1 hour) which passes the entrance to the Reform Mine and (3) the Lookout Track (1.1 km, 1 hour) which provides excellent views across the town. See http://www.greatalpinevalleys.com.au/pages/walks-and-trails/ for more details.

* Prior to European settlement the area was occupied by the Mungabareena, Dhudhuroa and Waveroo Aborigines.

* The first Europeans through the area were Hume and Hovell on their journey to Port Phillip. They named Mount Buffalo and the Ovens River.

* Pastoralists arrived in the Ovens Valley in 1837-38. One of the first was John Hillas who took up 15,000 ha and built huts and stockyards on the banks of Myrtle Creek.

* By the 1850s there were gold prospectors in the valley and Myrtleford began to emerge as a small settlement, a camping place near the ford on Myrtle Creek which was used by miners heading for the Beechworth goldfields.

* In 1854 John Riley was given a license to mine the reef on Reform Hill.

* The first goldrush in the Ovens Valley occurred along Happy Valley Creek in 1856.

* Myrtleford was surveyed and named in 1858.

* The first government school was opened in 1870 and the town had its first post office in 1874.

* The railway arrived in 1883 and Mount Buffalo National Park was established in 1898.

* The town survived because hop and tobacco production began around the same time as the goldrush. Chinese settlers, the Pan Look family became the largest growers in the district.

* After World War II new methods and strains of tobacco were introduced and a Tobacco Research Station was established. Southern European migrants, particularly Italians, settled in the area and embraced the local tobacco, hops and walnut industries.

* In 2006 the Australian tobacco industry ceased.

There is an excellent and detailed local website. Check out http://www.greatalpinevalleys.com.au/pages/myrtleford/ 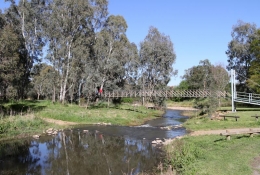 The start of the beautiful riverside walk at Myrtleford. 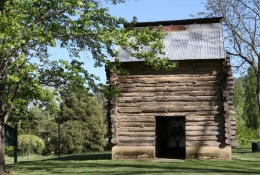 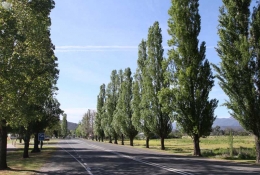 Poplars line the road at the entrance to Myrtleford. 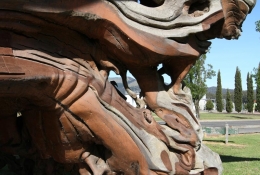 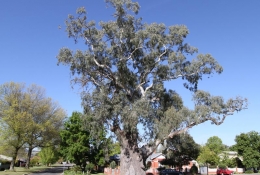