Small town off the Pacific Highway on the Mid North Coast

Nabiac is a small country town which has been bypassed by the Pacific Highway. Somehow it has managed to miss the wild-eyed, excessive development of the north coast. It wasn't until 1952 that Nabiac officially became a town on the Pacific Highway and not long after it was bypassed. Consequently it is a reminder of what towns on the Mid North Coast were like - all timber and modesty. Today it has become a popular place to stop for a break on the road north. Timber still dominates but many of the shops are new and the clientele they attract are people who want something a little more personal than motorway services. The town's backstreets are happily locked in a timewarp. This is a country town as it was fifty years ago.

Nabiac is located 283 km north of Sydney via the Pacific Highway and 24 km north-west of Forster-Tuncurry.

Nabiac is said to mean "place of the wild fig" in the language of either the Biripi or Worimi Aboriginal people who inhabited the area prior to the arrival of Europeans.

Nabiac Visitors Guide
Located on the Village Green in the centre of town is an excellent Visitors Guide information board which, apart from exhorting travellers to "Visit the Motocycle Museum (500 metres)" is remarkably comprehensive. It has a map of the village, details of the historic buildings, details about restaurants, cafes etc. Sadly it is very out of date because it still includes the remarkable:

Amish Country Barn
It is gone now but it was a very special treat. At 7 Nabiac Street there was an old-style buggy out the front of the Amish Country Barn, a modest but interesting craft shop-cum-eatery owned by Australia's only Amish Mennonite family. Their speciality was fine woodworking with some lovely hand-made wooden toys and small pieces of furniture for the home.

Nabiac Heritage Walk
There is a downloadable brochure at http://www.nabiac.com/publications/NabiacHeritageWalk.pdf which lists a total of 50 places of interest around the town. Download it before visiting the town. Among the town's many handsome timber buildings are:

Police Station - located at 70 Clarkson Street beside the Village Green it was constructed in 1911 and is still used by the police although the nearest permanent forces are at Forster and Taree.

St Paul's Anglican Church - located at 34 Clarkson Street this simple church was dedicated by Bishop Stanton of Newcastle in 1904.

St Isidore's Catholic Church - located in Nabiac Street. It was built in 1889 and is probably the oldest building in town.

National Motorcyle Museum of Australia
Follow the signs along Clarkson Street to the Motorcycle Museum which proudly announces that it is open seven days a week from 9.00 am - 4.00 pm. The history of the museum, as explained on their website, is: "The Museum operated in Canberra for approximately ten years, then the Kellehers sold their ACT motorcycle business and moved to the Mid North Coast of NSW where they built a purpose built complex that houses some 800 motorcycles together with an enormous array of motorcyle memorabilia, toys, an extensive private library and a motorcycle orientated gift shop ... Among the favourite machines on display are a Kenilworth scooter (1919), a twin cylinder water-cooled 2 stroke Scott, and a Vincent Black Knight. There is an excellent range of vintage bikes from the early nineteen hundreds, and of course many, many very interesting later machines. Allow an hour or two (or ten, if you're a serious enthusiast) to have a good look around and read some of the fascinating history presented." For more information check out http://nationalmotorcyclemuseum.com.au.

* Prior to European settlement the area was occupied by the Biripi and/or Worimi Aboriginal people. It was on the border of their lands.

* Captain James Cook passed the area on 10-11 May, 1770 and noted smoke from Aboriginal fires in the hinterland.

* Cedar Cutters arrived in the area around 1816.

* The explorer, John Oxley, passed through the area and crossed Wallis Lake on 25 October, 1818.

* The area was settled by dairy farmers in the second half of the 19th century.

* The first property established in the area was purchased by Henry Carmichael in July, 1855. It was 115 acres (47 ha) on the northern side of the river.

* St Isidore's Catholic Church, the oldest church in the town, was consecrated in 1889.

* In 1905 the London Bank of Australia opened an office at 42 Clarkson Street.

* The Nabiac Cricket pitch was established in 1907

* The current police station was built in 1911.

* In 1912 the railway from Sydney to Taree opened.

* On Anzac Day, 1932 the War Memorial on the Village Green was dedicated.

* The Wang Wauk Bridge across the Wallamba River was opened in 1936.

There is an excellent information board on the edge of the Village Green on Clarkson Street. There is no Visitor Information Centre. 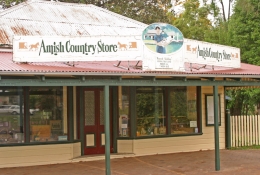 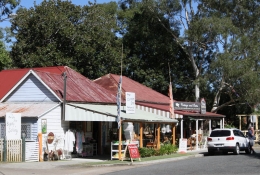 Historic shops - the Amish Store is now Vintage and Retro. 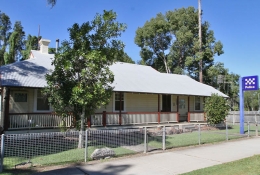 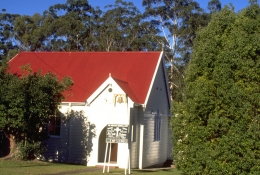 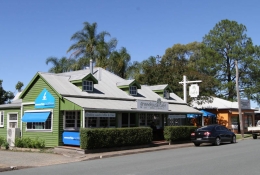 Cafes for drivers on the Pacific Highway now dominate in the village. 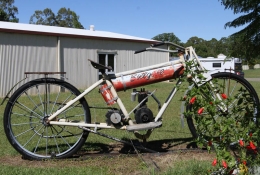 The Big Motorcycle outside the National Motorcycle Museum of Australia.