Rural service centre on the shores of Lake Nagambie

Nagambie is charming, lakeside town with a very wide main street which is located at the southern end of the Goulburn Valley between Seymour and Shepparton. The town is dominated by Lake Nagambie which lies beside the main street and provides waters for recreational boating and bird watching. Today the area is home to interesting vineyards as well as sheep, cattle, horse studs and tourism with skydiving, rowing, water skiing and the Nagambie Speedway being popular attractions.

Nagambie is located 138 km north of Melbourne via the Hume and Goulburn Valley Highways. It is 130 metres above sea-level.

'Nagambie' was named in 1872. The name was said to be a local Aboriginal word meaning 'lagoon' or 'still waters'.

Lake Nagambie
Lake Nagambie is a 170 ha reservoir which was created by the construction of Goulburn Weir (1887-90). It is fed by the Goulburn River. A section of the eastern shore runs beside the town's High Street and grassy picnic areas have been established on the lakeside. Buckley Park, at the southern entrance to town, is a delightful place to stop with a boat ramp, electric barbecues and a safe swimming area. On the High Street is Jacobsons Outlook, a pleasant view across the waters which is another picnick spot. There is a large unpowered area of the lake near the centre of town. Beyond that the lake is used for waterskiing and speedboating. Rowing and yachting regattas, including a Head of the River, occur throughout the year. Lying 6 km to the north via Kirwans Bridge Road, is Kirwans Bridge. Before reaching the bridge tis Turner Island Lane which leads to a quiet section of the lake where, between Baxters Island and Hallwells Island, there are numerous waterbirds.
There is a useful map of the entire lake area which can be downloaded at http://www.nagambielakestourism.com.au/attractions/116-lake-nagambie-map. Check out http://www.nagambielakestourism.com.au for more information.

Statue of Black Caviar
Located at Jacobson's Outlook, High Street, Nagambie, the life size statue of Black Caviar was formally honoured and opened on 24 October, 2013. It was created by sculptor Mitch Mitchell and based on a photograph of jockey Luke Nolen riding the horse in the Schweppes Stakes at Moonee Valley on October, 2011. The reason for th statue: "Black Caviar was born on 18 August 2006 at Gilgai Farm in Nagambie, Victoria. She grew up on the Goulburn River property and then went to Swettenham Stud in December 2007 for a 10-week yearling preparation where she was then sold on behalf of Rick Jamieson to the current owners to be trained by Peter Moody. The champion mare then went on to become the fastest horse in the world, undefeated in every race." Black Caviar won 25 out of 25 races and won almost $8 million in prize money.

Nagambie & District Historical Museum
Located at 344 High Street, the Nagambie & District Historical Museum has a collection of material relating to the local community. It is housed in the old Court House and shire offices (1871). There is a large agricultural machinery shed at the rear which houses the James Forbes Collection of machinery which was manufactured in the town. It is open fro 9.30 am - 12.30 pm on Wednesdays and by appointment, tel: 0407 811 572. Check https://victorianmuseums.com.au/nagambie-district-historical-society for more information.

Goulburn River
The river is navigable for 40 km south of Nagambie. Note that there is a section to the north of Chateau Tahbilk which is an exclusive water ski zone and home to the Nagambie Water Ski Club. There are sections of the river which are suitable for canoeing and the backwaters have a 5 knot zone regulation. Trout and redfin fishing are popular. There is a useful map of the river on either side of Nagambie which can be downloaded at http://www.nagambielakestourism.com.au/attractions/116-lake-nagambie-map.

Goulburn Weir
Located 10 km north of Nagambie off the Goulburn Weir-Murchison Road, the Goulburn Weir was built between 1887 and 1890, enabling the irrigation of the lower Goulburn Valley and turning the rich floodplain around the Goulburn River into hugely production agricultural land. The stone for the high dam walls was cut by hand and hauled from Mount Black to the site by horse and dray. There is a pleasant picnic ground with barbecue facilities and the weir and canals offer an insight into the irrigation of the district. For more information check out https://www.g-mwater.com.au/water-resources/catchments/storages/goulburn/goulburnweir.

Noorilim Estate
Located 16 km north east of Nagambie via the Goulburn Valley Freeway, Noorilim Estate, which is a combination of historic mansion, superb botanic gardens and vineyard, was built in 1879 for William Winter-Irving to a design by architect, James Gall.. "It has regarded as one of the best preserved 19th century mansions in Australia. The mansion contains a grand hall featuring Minton tiles, 10 bedrooms, 15 fireplaces, 7 staircases, an under ground living compartment, cellar and an organ gallery.  The 20 acres of gardens contain over 300 trees including 136 year-old Moreton Bay Figs, River Red Gums, Pines and English Elm. It also has an ornamental lake, 75 acres of vineyards and the grounds are home to over 150 varieties of birds. The estate has open day (typically one or two Sundays a month) for entry to the gardens and tours of the homestead. For upcoming open days check http://www.noorilimestate.com.au/experience-piece-history. The website http://www.noorilimestate.com.au has a detailed history of the mansion which can be used for weddings.

Chateau Tahbilk
Located 11 km south-west of Nagambie, on the Goulburn River, Chateau Tahbilk is Victoria's oldest family-owned winery and vineyard and one of the oldest in the country. It takes its name from the local Daung-wurrung Aboriginal expression "tahbilk tahbilk" meaning a place of many waterholes. It covers 1,214 ha of Goulburn River riverflats and has 11 km of river frontage on the Goulburn River. The property is noted for its exotic trees. It was established in 1860 and a 100 m cellar was added in 1875. The stone and timber buildings have a charming rustic feel, with an impressive 30 m belltower, a particular architectural highlight. The cellar door is open from 9.00 am to 5.00 pm Monday to Friday and from 10.00 am to 5.00 pm on weekends, tel: (03) 5794 2555 or 1300 824 245. Check out http://www.tahbilk.com.au for more information.

Goulburn Explorer River Cruises
The Goulburn Explorer River Cruiser cruises along the Goulburn River between Mitchelton and Tahbilk wineries which lie south of Nagambie. The cruiser seats up to 49 passengers and is a genuinely delightful way to visit the cellar doors of two of Victoria's most famous vineyards. Tel: (03) 5794 2373. Check out https://www.facebook.com/goulburnexplorer/ for more information.

* Prior to the arrival of Europeans either the Natrakboolok, Ngooraialum or Thagungwurung Aboriginal groups lived in the district.

* The explorer Thomas Mitchell was the first European in the area. He crossed the Goulburn River just to the south-west at what became Mitchellstown.

* , as did the postman on the mail route from Melbourne to Sydney, established in 1838.

* It was at this crossing that John Clark  built the first licensed inn outside of Melbourne in the territory that would later become Victoria.

* That same year Mitchellstown became the first inland townsite in Victoria to be surveyed (though it never developed) and it was here that the survivors of the massacre at Benalla arrived, also in 1838.

* An Aboriginal Protectorate was briefly established at Mitchellstown in 1839 but was moved the following year to what is now Murchison.

*  The land on which the town would develop was taken up as a squatting run in 1845 by Hugh Glass and John Purcell.

* Chateau Tahbilk was established in 1860 on a part of this run with the help of French vigneron Ludovic Marie who was also instrumental to the genesis of Murchison.

* A hotel, church and blacksmith were set up to cater to the through-traffic of teamsters journeying along the river system to Adelaide.

* Hugh Glass had the township surveyed in 1868 and it was gazetted that year.

* In 1871 the Goulburn Shire was created and Nagambie became the administrative centre.

* In 1872 the local Catholic Church was consecrated.

* Floods killed off the mine at Graytown in 1870 and many businesses relocated to Nagambie.

* The arrival of the railway between Seymour and Shepparton in 1880 resulted in Nagambie losing the coach and teamster trade.

* In 1885 a pumping plant was installed on the Goulburn River.

* By 1890 a weir had been built on the Goulburn River. It created Lake Nagambie.

* In 1898 the first rowing regatta was held on Lake Nagambie.

* In 2006 the champion racehorse, Black Caviar, was born near Nagambie.

* In 2010 the Australian Rowing Championships were held on Lake Nagambie.

* In 2013 the Goulburn Valley Highway bypassed the town.

Visit Victoria has useful information about the town. Check out http://www.visitvictoria.com/Regions/High-Country/Destinations/Nagambie and http://www.nagambielakestourism.com.au. 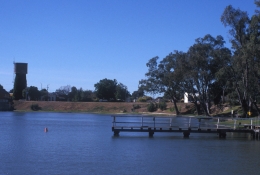 Lake Nagambie with a jetty and the town's water tower 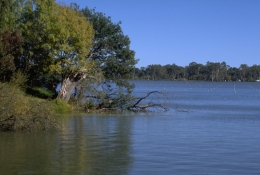 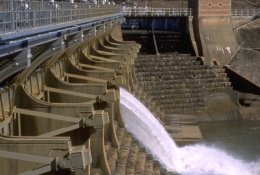 Nagambie Weir (1890) over the Goulburn River 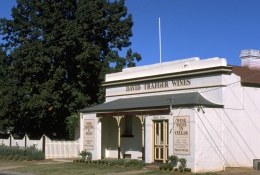