For many people, particularly holiday makers and retirees, Nambucca Heads is about as perfect as any place can be. It was not for nothing that the local Visitor Guide once described it as "God's Country"> The average temperature is 19°C in winter and 27°C in summer. The lazy subtropical climate is complemented by leisure activities including fishing, walking, boating, swimming, surfing and sunbathing. The town is located on a ridge which runs out to a headland whirch rises 26 metres above the Pacific Occean at the mouth of the Nambucca River, 26 metres above sea-level and 512 km north-east of Sydney. Just inside the estuary.. The major local industries include tourism, timber, beef cattle, dairying, bananas, forestry, fishing, oyster farming and the town functions as a service centre for the surrounding district.

Nambucca Heads is located 26 metres above sea-level and 485 km north of Sydney via the Pacific Highway.

It is widely accepted that the word 'Nambucca' comes from a Gumbainggar word meaning either "entrance to the waters" or "crooked river".

The Beaches
Nambucca's Main Beach is the home of the Nambucca Surf Life Saving Club and is patrolled during the Christmas holidays and until the end of the Easter school holidays. To the south of Main Beach, beyond the rocky outcrop, are Beilby's Beach and Shelly Beach. Both are quieter, more conducive to pleasant beach walks, and not patrolled. In the summer months the beaches are magnets. The water is warm and they are considered safe for swimming and surfing.

Waterfront Walks
There are a number of walks around the waterfront (the beaches, the headlands and the shores of the Nambucca River) all of which are an excellent way of experiencing and enjoying the local scenery and the holiday ambience of the town. The Lions Riverfront Walk, for example, heads west from the Vee Wall and follows the foreshore of the 'Inner Harbour' around to Gordon Park. There is also a foreshore boardwalk which goes around the shoreline from the RSL car park and there are a number of walks on Nambucca North Head.

The 'Graffiti Gallery' or Vee Wall
It was such a simple idea. The breakwater wall protecting the entrance to the Nambucca River was a collection of large rocks (like many harbour walls along the east coast of Australia) and someone got the bright idea of opening them up to artists - both professional and amateur - to paint in their own unique ways. It became a kind of homemade postcards with rocks painted, poems written on them, and excellent pieces of graffiti. The amount of effort which has been put into the graffiti has turned a simple idea into a premier tourist attraction Now it stretches over 500 metres and has cartoons, paintings and all kinds of art works.

Fishing
Part of the appeal of Nambucca Heads is the excellent fishing that can be had on the beaches, from tinnies either on the river or beyond the mouth and from the Vee Wall. As Nambucca Valley tourism (see https://www.nambuccatourism.com.au/tours/more/fishing-on-the-nambucca) notes: "The options are unlimited: You can choose a day on the continental shelf or fishing the closer inshore reefs; spin or troll for pelagic around the rocky headlands; chase bream, flathead and whiting in the estuary; or head upstream in search of Australia’s premium freshwater fish, the mighty Australian Bass." And what can be caught around the town: bream, silver drummer, flathead, blackfish, jewfish, taylor, whiting, red bass, snapper, garfish, pearl perch, teraglin, kingfish, mackerel and sampson.

Gordon Park Rainforest and Nature Walk
Gordon Park, originally known as Log Hollow, is located over the road from Woolworths - the access path runs off Fraser Street. It was named after Robert Gordon and his wife who erected the town's first hotel nearby. The Gordon Park Boatshed was the site of the town's first wharf. The park preserves a piece of pristine rainforest. Gordon Park Rainforest is a 2.067 ha park features nature walks that allow pedestrian access throughout the park to observe the flora and fauna (the park's birdlife is particularly impressive), as well as the heritage structures (a horse trough and well) that are preserved within the rainforest. In recent times there has been a major problem with flying foxes in the park which has seen it closed at various times.
There is a walking trail which passes through an arboretum, past a swamp, though coastal forest and a section of rainforest. There are resting places along the way and views of the river, Warrell Creek and along South Beach, as far as Scotts Head and Trial Bay. Check out http://www.nambucca.com.au/rainforest for a map of the walks and a detailed description of the walk. It is particularly useful for bird lovers noting: "While sitting quietly look for the Eastern Yellow Robin and the Rufous Fantail or some of the many other local and migratory birds that make the forest their home ... While walking along, listen for the whip-bird and the cat-bird".

Lookouts
Captain Cook Lookout
The Captain Cook Lookout, at the end of Parkes Street, is located above Shelly Beach and adjoining Wellington Rock - the northern headland of the Nambucca River entrance. It offers panoramic views eastwards over the Pacific Ocean and south over the mouth of the river and the breakwater to South Beach which stretches nearly to the horizon. Dolphins and whales can be seen in season - June-July and September-October.

Rotary Lookout
There is another lookout over the mouth of the river and the Vee Wall on the way out to the Captain Cook Lookout. On the hill above Rotary Lookout are two old graves. If you turn left off Parkes St into Shelley Beach Rd, you will soon come to another small pioneer cemetery on the left, suggesting that, in the nineteenth century, it was the done thing to bury people on the headland overlooking the sea. Lions Lookout is located further north, along a little side road that heads off Newry Sreet.

The Headland Historical Museum
The Headland Historical Museum is located in Liston Street and is open from 2.00 pm - 4.00 pm on Wednesday, Saturday and Sunday. Tel: (02) 6569 4353 or check out https://www.facebook.com/Nambucca-Headland-Museum-129931440511923. It has a collection of local photographs, written works and memorabilia relating to the timber and shipping industries. There are also Aboriginal artefacts, colonial household items, early garments and needleworks, agricultural machinery and booklets outlining historical walks of the town. There is a useful brochure on museums in the district which can be downloaded at http://svc098.bookeasy.com/images/nambucca/nambuccavalleymuseums%20.pdf.

Valla Beach
Located 10 km north of Nambucca Heads via the Pacific Highway, Valla Headland and Valla Beach are known as quiet retreats for people who are experienced surfboard riders and people who love "Para sailing, sail boarding, fishing, beach walking and family picnics. There is also a walking track, and visitors can enjoy deep-sea, beach and estuary fishing. It is possible to walk to Valla Beach from Nambucca Beach - a distance of about 3 km. There is a useful website (http://vallabeach.com) which sings the praises of the beach and the attractions: "Imagine sitting on your board just after sunrise and a dolphin joins you on the wave. Valla Beach is well known for dolphins and you will also see Humpback whales during their migrations north and south. The beach is quiet, both in and out of season. North Valla Beach has great surfing but it is not patrolled. South Valla Beach is patrolled only during the Christmas Holidays.  Council have placed warning signs on the beach warning of the hazards. The quiet waters of Deep Creek presents safe swimming for children and is popular as a picnic area for families not interested in walking out to the ocean beach. Valla Beach is also popular with shell collectors, the prized cowrie shells can be found washed up on the previous high tide."

* Before European settlement the Nambucca area was inhabited by the Gumbaynggar  and Dunghutti Aboriginal peoples.

* The first Europeans to encounter the Nambucca River were probably a party who, in 1818, set off from Sydney in search of convicts who had stolen a boat from Sydney Harbour.

* Red Cedar cutting was under way on the Nambucca River by 1842, although the dangerous sand bar at the river mouth caused major shipping problems for those seeking to transport their produce to markets. There were a number of shipwrecks, and vessels were sometimes left stranded at the harbour for months at a time.

* The first settler on the townsite appears to have been a fisherman named Lane who, by 1867, had built a bark humpy on the northern headland. He established a ferry service across the river. At that time there were about 50 people on the river. Most were timber workers although some maize was under cultivation.

* Lane lived on the land which runs along the foreshore from the breakwater. It is along this riverside area, known as the 'Inner Harbour', that the original village developed. The town later moved to the top of the hill.

* The first of several sawmills was built adjacent the 'Inner Harbour' in 1870. It supplied timber to local shipbuilders.

* No land was sold at the initial allotment sale in 1877.

* In 1879 four blocks were sold and a wharf was built at the Gordon Park Boatshed.

* In 1884 Robert Gordon opened the town's first hotel (the Commercial) and a school was also established.

* A building called 'The Bethel', erected in the 1880s, doubled as a site for church services and fortnightly dances.

* In 1886 Baillier's Gazette described the river as "a fine mountain stream flowing through low swampy country, well timbered with cedar and other valuable woods. It falls into the ocean by a narrow rocky channel about fourteen miles north of Trial Bay and is navigable for small vessels that trade there for cedar, the only export".

* The village of Nambucca was proclaimed in 1885.

* 'The Ranch' on Wellington Drive (overlooking Gordon Park) was built in 1890 as the Victoria Hotel.

* It was not until paspalum grass was introduced in the 1890s that the area became profitable for dairy farmers.

* Work commenced on a breakwater in 1895. This improved access to the river and enabled ships to travel upriver as far as Macksville.

* The first butter factory in the valley opened at Macksville in 1902.

* Local government in the Nambucca Valley was established in 1915.

* Tomato, banana and carrot-growing developed in the Nambucca Valley during the 1920s.

* The mining of arsenical pyrites, molybdenite and antimony occurred in the 1920s and 1930s.

* Furnished cottages in Nambucca Heads were let to holiday-makers from 1926.

* The first private caravan park on the North Coast was opened at Nambucca Heads in 1952.

There is a useful local website - http://www.nambuccatourism.com.au/nambucca-valley-region/nambucca-valley/nambucca-heads - which provides information about accommodation and eating in the local area. 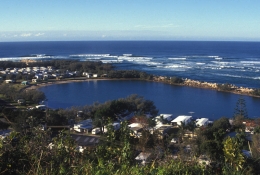 View over the caravan park, V wall and mouth of the Nambucca River. 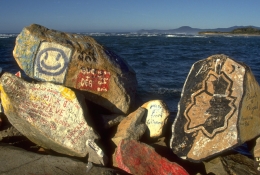 The unique V Wall in the late afternoon. 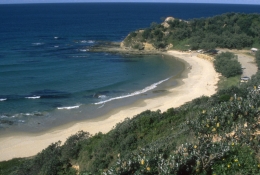