Timber town now promoting itself as the 'Garden Village'

Nannup is a rural service centre for the surrounding beef cattle and timber industries. Visitors entering the town from the south pass through an area of rolling hills and tall stands of karri trees and their first view of Nannup is the blue smoke curling up from Bunnings Timber Mill on the outskirts of town. In recent times, with the advent of a music festival and the town attracting artists, it has become an increasingly popular place for visitors from Perth.

Nannup is located 267 km south of Perth via Bunbury and Busselton.

There are four possible definitions of the town's name. One claims it is a local Nyoongar word meaning "a meeting place by the water". A second claims it means "stopping place". A third suggests it means "place of parrots" and a fourth is that it was the name of an Aboriginal guide who assisted the explorer John Forrest during his travels through the region.

Nannup Museum
Located in the old Roads Board building on the corner of Warren Road and Brockman Street, the Nannup Museum contains "some 2,500 photographs from the turn of the twentieth century to current times together with extensive archives covering Nannup district history." It is open on Monday, Wednesday and Friday mornings and can be inspected by appointment at other times. Tel: 0409 376 372. Check out http://www.nannuphistory.org for further details.

Templemore
Templemore, which was built around 1908 by the Irishman, James Kearney, is located at 8 Warren Street and, in 2017, was the Templemore Cafe and Emporium. It was the town's first brick dwelling and in the 1930s was used as a guest house. It is an attractive Victorian villa.

Memorial to Marinko Tomas
In the Marino Tomas Memorial Park on the Vasse Highway at the southern end of town (near the children's play area) is a memorial to Marinko Tomas, a local youth who became the first Western Australian national serviceman to be killed in Vietnam. At the time he was 21, was officially Lance Corporal Tomas and died after being hit by schrapnel from "friendly artillery forces". Appropriately the sculpture was presented to the town by the Free Vietnamese Community of Western Australia and sculpted by Van Khoat Nguyen. There is a detailed description of the statue at https://monumentaustralia.org.au/themes/people/military/display/60870-marinko-tich-tomas.

Nannup Arboretum
The Nannup Arboretum is located in Brockman Street next to the local Caravan Park. It was initially planted in 1926. The original plan was to plant a wide variety of trees to see which ones prospered in the local environment.

Walking Trails in the area
There is a dedicated Total Trails website which offers details about seven trails in the district. Check out http://www.totaltrails.com.au/nannup-c1bkk.

Munda Biddi Trail
The Munda Biddi Trail is a 1000 km cycle track which runs between Mundaring and Albany. The relevant section of the trail, which passes through Nannup, is the Jarrahwood to Manjimup with the two sections being - Nala Mia Hut to Nannup (26.7 km) and the Nannup-Donnelly River (37.3 km). This section is noted for the trail traversing karri and jarrah forests. The website explains: "The ride to Nannup uses the Sidings Rail Trail which meanders through State forest and Conservation Park for most of the way. It is marked with both the Munda Biddi Trail and the Sidings Rail Trail markers. It is also a dual-use trail so be prepared to encounter walkers enroute." When the trail passes through Nannup it crosses the Old Railway Bridge. Nearby is a flood tree which records the record heights of floods through the town. For more information check out https://www.mundabiddi.org.au/trip-planner/section-guide/jarrahwood-manjimup/s-info.

Timberline Trail
The Timberline Trail runs for 22 km and follows a disused railway line. It is recognised as a two day walk or a one day cycle which passes Workman's Pool and makes its way through impressive stands of jarrah forest. It is ideal as either a bushwalk or a mountain bike experience. For detailed information check out https://trailswa.com.au/trails/old-timberline-and-sidings-rail-trails/print.

The Nannup Tiger
One of the local 'legends' is that there may still be thylacine's (commonly known as the Tasmanian tiger but in this area known as the Nannup tiger) in the area. It is unlikely because the last evidence of thylacines on the mainland dates from 3,000 years ago. There have been a large number of reported sightings over the years and fossils in the caves to the west have shown that this was once thylacine habitat. In 1970 there was a serious attempt to find the animal but the seriousness was somewhat diffused when a local wit, appropriately named John Perks, painted stripes on an old ewe and put her in an area where people were searching for a tiger. For an eight page detailed history check out http://www.everythingnannup.com.au/nannuptiger.html. There is a carved 'Nannup tiger', cut from a jarrah log by Flint Edwards in 2003, at the entrance to the town.

Scenic Drives
This lack of observable history has seen the town concentrate its appeal on walks and drives which take visitors through the forests which surround the town. Maps and details of the drives are available at the Tourist Information Centre. The drives include the Nannup-Donnelly Scenic Drive, the River Road Drive and the Jarrah Forest Drive which passes Darradup House (1867) the oldest building in the district.

Donnelly River
Located 32 km south-east of Nannup, Donnelly River is now a holiday village which is known for its wildlife which roams freely in the district. The site was first used as a timber mill in 1909 with local Karri and Jarrah being carted by bullock wagon (10 bullocks) to Yornup siding, 8 miles away. They supplied tens of thousands of telegraph poles to the Government, as well as supplying quantities of Jarrah for the mines.
In 1923, Bunning Brothers purchased mills at Collie and Yornup, near Bridgetown. Early in 1947, new plans were being drawn up by Bunning Brothers to build a mill at the site of Wheatley's mill. Bunnings changed the name of the site to Donnelly River.
A village was purpose built in the 1950s for the Bunnings Brothers, the thirty-five workers cottages, boarding house and club overlook the original steam mill, school (now a bunk-house for Bibbulmun hikers and Munda Biddi bike trail adventurers), butcher shop (now a school-holidays screening theatre) and general store (now a cafe, social gathering place, and store for Donnelly guests). The village has a lake, oval, tennis, basketball and beach-volley ball courts and a 50m flying fox. For more information check out http://www.donnellyriver.com.au.

* Prior to the arrival of Europeans the area was home to the Wardandi, Bibbulmun and Nyoongar Aboriginal people.

* The Nannup area was first explored by Thomas Turner (one of the original settlers at Augusta) who travelled up the Blackwood River in 1834.

* It was settled in 1850s and 1860s by farmers who recognised the agricultural potential of the area.

* The name "Nannup" was first recorded by surveyors in the 1860s.

* A bridge across the Blackwood River was built in 1866.

* A Police Station and Post Office were established near the bridge in the late 1860s.

* The townsite was officially gazetted in 1890.

* The first school in the district was opened in 1903.

* By 1909 the Nannup Branch Railway had been extended from Jarrahwood. It linked to the Bunbury-Busselton line.

* It was not until the early 1900s that the full potential of the karri and jarrah trees was realised and exploited.

* The town was flooded in 1945 when the Blackwood River broke its banks.

* The present mill was built after fire destroyed the original mill in 1954.

* The bridge over the Blackwood River at the northern end of town dates from 1967.

There is a useful local website. Check out http://www.everythingnannup.com.au. 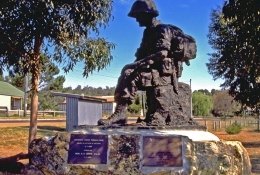