Important service town on the Murrumbidgee River at the intersection of the Newell and Sturt Highways.

Narrandera is a substantial and gracious rural centre positioned exactly halfway between Wagga Wagga and Griffith where the Sturt and Newell Highways intersect. Situated on the banks of the Murrumbidgee River it is enriched by its many historic buildings and cedar-lined streets. The town has been declared an urban conservation area by the National Trust and the surrounding district has been developed as a conservation area for birds and koalas.

Narrandera is located 555 km south-west of Sydney via the Hume and Sturt Highways. It is 152 m above sea-level.

It is claimed that Narrandera is a corruption of Wiradjuri Aboriginal word "Narrungdera" said to mean "jew-lizard", "place of the goanna or lizard", or "caught a frill-necked lizard".

Commercial Bank (1884)
The National Australia Bank at the corner of East Street and Twynam Street is a two-storey building of rendered masonry with a detached kitchen, coach house and stables at the rear. It was designed by the Mansfield Brothers and built in 1884 with a slated hipped roof and heavily moulded brackets in the eaves. The main entrance is marked by a projecting central masonry arch and coupled columns which support a small pediment. The second floor veranda is characterised by delicate iron lacework decoration.

Post Office (1900)
Located at the corner of East Street and Twynam Street this red-brick Federation-style post office was erected in 1900 with terracotta roof and some unsympathetic extensions. The entry porch and ground floor windows are arched.

Railway Station
The railway station and stationmaster's residence (c.1885) were built when the railway reached the town. They are located in Whitton Street and characterised by painted brick and rusticated quoins. The recessed entrance porch and the platform awning have timber columns topped with iron lace brackets. The roof over the main section is gabled.

Star Hotel
The Star Hotel, at Whitton and Arthur Streets, was built adjacent to the station and was originally called the Railway Hotel. The present building was erected in 1916 and is now a guest house/ B&B.

Wreck of the PS Wagga Wagga
PS Wagga Wagga is a wreck in the Murrumbidgee River which can be seen when the river is at a low level. A viewing platform is located approx 2.5kms along Lizard Drive.  The PS Wagga Wagga was built in 1877. In 1918 it started to leak and was floated downstream from Narrandera and sunk.

Parkside Cottage Museum
Opposite Narrandera Park, on the corner of Twynam Street and the Newell Highway, is the Parkside Cottage Museum. The museum was established in the century-old building in 1968. It has some genuine rarities including the MacArthur Opera Cloak, a cloak made from the first bale of wool ever sent to England by the MacArthur family in 1816. There is also a snow shoe and a wooden snow ski from Scott's Antarctic Expedition, as well as period costumes, a huge collection of shells, minerals and gemstones. Tel: (02) 6959 1372. Open 10.30 am - 5.00 pm Monday to Saturday and 2.00 pm - 5.00 pm Sunday. Check out http://mgnsw.org.au/organisations/narrandera-parkside-cottage-museum/ for more details.

Tiger Moth Memorial and the Big Playable Guitar
Over the road from the Parkside Cottage Museum is Narrandera Park where a DH82 Tiger Moth stands as a tribute to those who completed their basic flying training at Narrandera during World War II. The building, which is located next to the Visitor Information Centre, is open 9.00 am - 5.00 pm Monday to Saturday and 10.00 am - 2.00 pm Sunday. The Visitor Information Centre is also home to the Biggest Playable Guitar. It was the biggest in the world until a larger one was built in the USA in 2000. Now it claims to be the biggest in the Southern Hemishere. It was built in 1988, took over 300 hours to construct, is 5.82 metres long, 2.02 metres wide and the strings are over 3.98 metres.

Hankinson Ceramic Fountain
The Hankinson ceramic fountain is located in Memorial Park in Victoria Square. Made by the famous British ceramics company, Royal Doulton, it is one of only two in the world. The other is at Karachi in Pakistan. It was given to the people of Narrandera by Alderman R.H. and Mrs Hankinson in 1922 in honour of those who served in World War I.

The Poet John O'Brien and the John O'Brien Bush Festival
For 27 years Father Patrick Hartigan was the Parish Priest at St Mel's Catholic Church in Narrandera. He was also the noted bush poet John O'Brien whose most famous collection Around the Boree Log and other verses (1921) included such well-known poems as 'Said Hanrahan', 'The Old Bush School', 'At Casey's After Mass' and 'Tangamangaloo'. His other volume, posthumously published in 1954 after his death was, according to his wishes, entitled The Parish of St Mel's in honour of his parishioners. Each year in mid-March, around St Patrick's Day, the John O'Brien Bush Festival is held in the town to celebrate Father Hartigan and Australian bush culture through its music, poetry, dancing, and, dare we say, drinking. For more details check out http://johnobrien.org.au. There is a frieze monument to O'Brien in the forecourt of St Mel's Church.

Lake Talbot and the Bundidgerry Walking Tracks
There are three pleasant bushwalks around Lake Talbot - a short loop of three kilometres, the Lake Talbot loop of 7 km and the Murrumbidgee loop of 11 km. All go around the lake and beside the river. The longest of the walks takes around four hours and includes the Koala Regeneration area as well as a variety of terrains including rocky hills, gullies, high river banks and sandy beaches. The best time for a walk is early in the morning when it is possible to see kangaroos, parrots, currawongs, magpies, galahs, willie wagtails and kingfishers.

Koala Regeneration Centre
Located 1.7 km from the Visitor Information Centre (it is off Old Brewery Road just near the Newell Highway) is the Koala Regeneration Centre beside the Murrumbidgee River. It was started in 1972 when three females and one male were introduced. Over the years literally dozens of koalas have been added to the community so that today there are over 200 koalas in the reserve. There is an annual koala spotting day when the size of the community is counted. It is administered by National Parks and Wildlife. For more information check out http://www.narrandera.nsw.gov.au/cp_themes/default/page.asp?p=DOC-RNH-63-85-28 or phone 1800 672 392.

Narrandera Wetlands
Located directly over the road from the Brewery Flat Ovals (off Old Brewery Road) the Narrandera Wetlands are an ideal place for twitchers. The birdlife is amazing. The authority which administers the wetlands explains that "The aim of the Wetlands is to improve the quality of water entering the Murrumbidgee River whilst providing a haven for water birds and associated flora and fauna ... The Narrandera wetlands is the perfect location to enjoy a relaxing bush walk on the one kilometre elevated walking track which includes two bridges, and to comfortably view the myriad of birdlife that have made this sanctuary their home. Landcare have also installed several concrete hides along the track together with interpretative signs and a number of rest areas. Well over 90 different species of birdlife use the Narrandera wetlands. This includes some rare and endangered species like the elusive Little Bittern and Latham’s Snipe, which have recently been sighted by birdwatchers. Other species such as the Superb Parrot are unique to the Riverina region and can be seen in large numbers in the area. Less common species seen in the area include Brolgas, Great Egrets, White Eyed Ducks and Peregrine Falcons." There is a useful downloadable map which identifies the area precisely. See http://www.narrandera.com.au/images/narrandera_wetlands_map.pdf.

John Lake Centre - Narrandera Fisheries Centre
The John Lake Centre, also known as the Narrandera Fisheries Centre, is located 6 km east of Narrandera. It was established in 1962 and "has been the centre of inland freshwater fisheries research in New South Wales, and has also developed into a productive hatchery, providing fingerlings of four native fish species (Murray cod, Trout cod, Golden perch and Silver perch) to improve freshwater recreational fisheries and conservation initiatives ... The Centre also performs important scientific research into all native and alien species of fish in the Murray-Darling Basin. These species range from popular recreational species such as Murray cod, golden perch and silver perch, to small forage species like Murray rainbow fish, Australian smelt and the endangered purple spotted gudgeon." The Fisheries Centre includes the John Lake Centre where "Both native and introduced species are on display, including 'Agro', a large Murray cod, as well as a theatrette, beautiful parklands and a small lake." It is located on Buckingbong Road, off the Sturt Highway (02) 6959 1488. The centre is open Monday to Friday with guided tours at 9.00 am, 10.30 am, 11.30 am, 1.30 pm and 2.30 pm.  Check out http://www.dpi.nsw.gov.au/research/centres/narrandera-fisheries-centre for more details.

* Prior to European occupation the area was inhabited by the Wiradjuri Aborigines who called the district  'Narrungdera'.

* The explorer Charles Sturt passed through the district in 1829. He was probably the first European to do so.

* Buckingbong station, south of the river, was taken up in 1839 by the Jenkins family.

* By the end of the 1840s drovers were diverting their stock south to the new goldfields. The Narrandera Run was an ideal location to cross the Murrumbidgee River.

* After a major flood in 1852 John Dill built a punt to cross the Murrumbidgee and there was agitation to build a village on the northern side of the river.

* The government surveyed both the north and south banks of the Murrumbidgee. There was an argument as to which side would be better for the town.

* By 1865 the Australian novelist, Rolf Boldrewood, who was living in the area, described the settlement as "two hotels, a small store and a large graveyard".

* The combination of railhead and steamer port made Narrandera the most important town in the Riverina from 1881 to 1914 when the population reached about 3,000.

* The drought of the early 1890s stalled expansion and Narrandera's industrial base declined.

* The development of the Murrumbidgee Irrigation Area in the 1910s brought fertility to the plains and diversified primary production to include rice, citrus, cereals, stone fruits, wool, lucerne, fat lambs and poultry.

* Marie Bashir, former Governor of New South Wales, was born in Narrandera in 1930.

* By 1940 Narrandera was being used as a training camp for young pilots.

* The town celebrated its centenary in 1985. 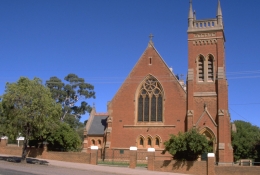 St Mel's Catholic Church where the poet John O'Brien was the Parish Priest. 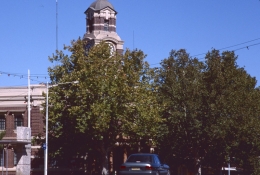 The Council Chambers building in Victoria Square on the corner of East Street. 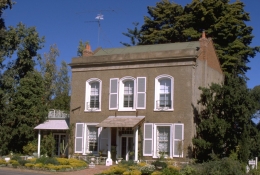 One of the town's many elegant houses -Antiques Corner in Larmer Street. 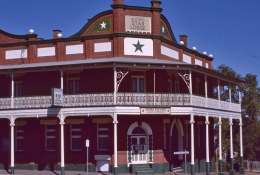 The Historic Star Lodge in Narrandera - now a B&B 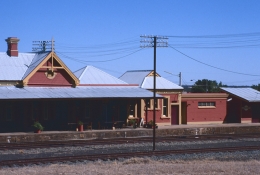 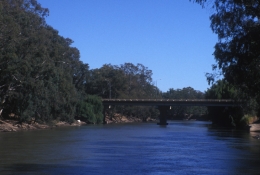 The bridge across the Murrumbidgee River at Narrandera. 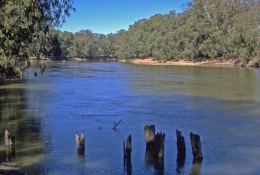 The Murrumbidgee River at Narrandera.