Pleasant regional service centre on the banks of Broken Creek

Nathalia is a charming, old-fashioned country town which spreads across both banks of Broken Creek. The town's main thoroughfare, which was modelled on Sturt Street in Ballarat, features a fine central plantation and there are some 19th century veranda-fronted shops and solid red-brick buildings. A new Forest Heritage and Education Centre offers displays relating to the history of the area; there are a number of interesting historic buildings in the town; and the Barmah National Park, located to the north and west, contains the largest red gum forest in the world.

Nathalia is located 231 km north of Melbourne via the Hume Highway and Shepparton.

There are two wildly conflicting meanings for Nathalia. One claims it is a Yorta Yorta world meaning "place with no stones" The other claims it was named after the Russian Tsar, Peter the Great's, mother whose name was Natalya Naryshkina.

Barmah Forest Heritage and Education Centre
This handsome new building was opened, located at 73 Blake Street, in 2011. It is an impressive example of recycled timber - it uses old red river gum which was once part of the wharf at Echuca.
The Centre is designed so that visitors can learn about the district. There are displays about local indigenous culture, the timber industry, wood cutters, river boats, cattlemen, leech and feather collectors and the challenges faced by the early European settlers. The centre also contains the Nathalia Barmah Visitor Information Centre which is an interpretative centre where you can learn about the diverse history of the Barmah Forest and this iconic region. For more information tel: (03) 5866 2289. It is open seven days a week from 9.00 am - 5.00 pm.

The Broken Creek Walk Track
There are eight separate walks along the creek which meanders through the centre of town. There is a brochure available at the Barmah Forest Heritage and Education Centre. The walks take in some fine waterside homesteads, the weir, a few fishing spots, a lookout and some attractive local flora, including redgum, box trees and wattles. Each walk is numbered on the brochure and the distance is recorded. So it is easy to start at any point in the walk.

1a. Cordial Way
This is a 327 m walk through an area noted for its wattles and willows. It was named because in the 1930s there was a Cordial Factory along the track.
1b. Woodlands Walk
This is a 503 m walk past some of the oldest houses in the town. Girrahavan is over 100 years old; Woodlands was built in 1896 and has impressive jarrah floors and 14 foot (4.26 metres) jarrah ceilings; and Harboniere was built in 1923 by a local who won a military medal at Harboniere in France during World War I.
1. Syd's Stroll
A pleasant 531 m walk beside the river past silver wattles, river red gums, peppercorn trees, an elm tree and a Moreton Bay fig.
2. N.A.D.C.O. Lookout
An 837 m walk past the swimming pool to a lookout over the town.
3. Wattle Tree Drive
Characterised by varieties of wattle - gold dust, rough leaf, montane and nelia - this is a pleasant 1.67 km walk past small jetties on the creek and tables under the willow trees.
4. Chain Gang Avenue
A 276 m walk from the Cemetery Bridge to the Scout Hall.
5. Shady Creek Walk
A 539 m walk to the town weir. The walk has stands of grey box, black box, yellow box and cumbungi.
6. Gray's Cutting
A 2 km walk to the golf course. It is possible to see water fowl, purple swamp hens and small reed birds at the edge of the creek.

Nathalia Historic Short Walk
In 1988 the Nathalia and District Historical Society produced An Historic Walk - Drive which listed a total of 53 places of historic interest in the heart of Nathalia. It was comprehensive but many of the places were "sites" which had long changed and the information was often brief. It is still available at the Barmah Forest Centre.
In more recent times a 18 place Nathalia Historical Short Walk, which can be photocopied for you at the Barmah Forest Centre, offers a more succinct look at the most interesting buildings in the town. The numbers coincide with the numbers on the brochure. The highlights include:

1. Court House Hotel
Located on the corner of Blake and Pearce Streets, a timber hotel was built on this site in 1879. It burnt down in 1905 and the current building replaced it in 1906. It had 32 rooms. It was named the Court House because the first owner, Charles Whitty, was a policeman who used the hotel for court sessions.

2. Nathalia & District Historical Society Museum
Located at 43 Pearce Street and occupying the old Mechanics Institute (1887) and the surrounding grounds, the museum contains maps, books, memorabilia, old photographs and the grounds around the building have a range of historic farm equipment including important harvesting equipment. It is open on the second Sunday of each month from 1.30 pm to 4.00 pm, tel: (03) 5866 2289.

4. Post Office
Located in Blake Street, the Post Office, now commercial offices, dates from 1878 and was used as the town's post office until 1973. It is a decorative single-storey brick building with stucco mouldings and Jacobean touches. It was built in 1878 with the front office added in 1891 and the residence in 1915.

6. Nathalia Hotel
Located in Blake Street, the Nathalia Hotel was built in 1882. At the time it had 11 rooms for accommodation and proudly declared that it had good stables and two loose boxes for the horses owned by the residents. All the horses were fed by a full time groom.

7. Bank of Australasia
Located in Blake Street, the Bank of Australasia was opened in 1889. It had cost over £1,500 to build. The manager at the time was George Keogh who was only 25 years old. He was paid £170 a year. It subsequently became the ANZ Bank but was closed in 2011.

10. War Memorial
The town's war memorial is located in the central plantation on Blake Street, on the southern side of the Town Bridge which spans Broken Creek. It consists of a large rock bound in chains and bearing the names of the locals who died in the two world wars.

Broken Creek Drive
There is an attractive brochure, available at the Barmah Forest Heritage and Education Centre, which takes a 58 km (it takes about two hours) drive west along Broken Creek (it is two drives which connect at the end) and describes, in great detail, the sights along the way.

Barmah National Park
Barmah National Park (28,521 ha) is located on the flood plains of the Murray River north of Nathalia. Head north for 8 km along the Murray Valley Highway and  turn left onto the Picola-Barmah Rd. Several access roads head northwards into the park from this road. However rain, flooding and seasonal closure affect that access.
The forest occupies an area which borders the southern bank of the Murray from a point due north of Barmah and stretching eastwards to Morgans Beach, not far from Cobram.
To access it drive north on Moira Lakes Road until you reach the  and the Day Visitors Area. The three main tracks all lead off from this area. The western section is 9 km north of Barmah and is accessed by Moira Lakes Road. After it crosses Broken Creek on Rices Bridge there is a road on the left that leads to a day visitor area where the Murray River, Moira Creek and Barmah Lake meet. There is a boat ramp, a fireplace, a picnic area and toilets. Beyond this branch track Moira Lakes Road becomes Sand Ridge Track. It soon passes another side road on the left which leads to the Dharnya Centre, the Community and Education Centre.
The combination of the Barmah National Park and the Moira State Park (in NSW) forms the largest redgum forest in the world. It has a World Heritage listing. It is on a major flight path for migratory birds and is an important breeding ground for waterbirds. Some of the trees in the forest are estimated to be over 500 years old and are over 45 metres high. The National Park is also home to kangaroos, emus, koalas
There are a number of canoe trees and ancient middens in the forest. There is extensive evidence that Yorta Yorta Aborigines inhabited this area long before Europeans arrived.
In winter the area usually floods creating a wetland biosphere which becomes a breeding ground for birds (there are 206 species in the forest). It is a popular spot for birdwatching, as well as fishing, walking, boating, camping and picnicking. There is a detailed Barmah National Park - Visitor Guide available for download at http://parkweb.vic.gov.au/__data/assets/pdf_file/0003/315732/Barmah-National-Park-Visitor-Guide.pdf.

Kingfisher Wetland Cruises
Kingfisher Wetland Cruises offer a two-hour interpretative cruise of the lakes and forest. The cruises are available on Sundays, Mondays, Wednesdays, Thursdays and Saturdays. They depart from the Day Visitors area at Barmah Lakes. The cruises focus on the ecology and history of the forest, the birdlife and its habitats and the Aboriginal significance of the area, tel: (03) 5855 2855. For cruise times and more details check out http://www.kingfishercruises.com.au.

* Prior to the arrival of Europeans the area was occupied by the Yorta Yorta Aboriginal people.

* The first European in the district was explorer Charles Sturt who followed the Murray to its junction with the Goulburn River in 1838.

* Squatters arrived in the district in the early 1840s.

* The town developed on the 'Kotupna' station which was established by W.J. Locke in 1843.

* The property was divided in two in 1861 and broken up for closer settlement after the 1869 Land Act.

* Richard Blake, took up land on the future townsite in 1875.

* By 1877 a regular coach service had been established.

* When the first survey was conducted in 1879, there were about 150 persons living on both sides of Broken Creek.

* A Catholic Church and the first bank opened in 1881

* A local newspaper and police station were opened in 1884.

* The railway reached Numurkah in 1888. That year the town held its first Agricultural Show.

* In 1900, a local man patented the Empire combine harvester but the design was sold to a South Australian company.

* In 1972 the local historical society acquired the Mechanics Institute.

* The Barmah Forest Heritage and Education Centre was opened in 2011.

There is a very useful website located at https://www.suncountryonthemurray.com.au/destinations/nathalia. 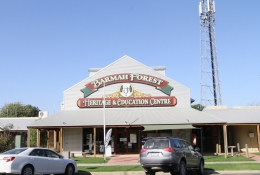 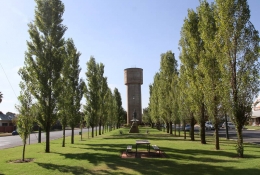 The water tower and median strip in Blake Street 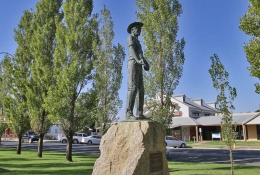 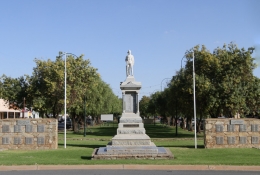 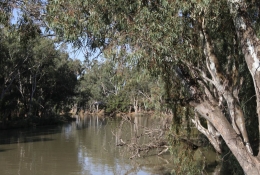 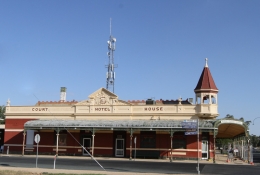 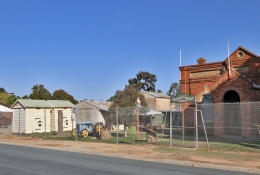 Mechanics Institute (1887) now the home of the Nathalia Historical Museum 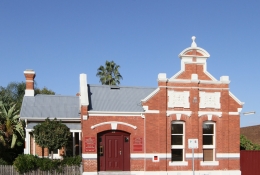 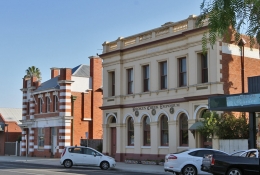