Sleepy town on the Clyde River

Nelligen is a tiny town located on the Clyde River upstream from Batemans Bay. Located on the Kings Highway it is little more than a hotel, a cafe and a few homes. Its appeal lies in its easy access to the rive and it is particularly interesting as a minor chapter in the wild history of the Clarke Gang - bushrangers who marauded through the district during the Araluen goldrush of the 1860s. Today its points of interest include the opportunity to hire a houseboat and cruise around the peaceful Clyde River and a crusty, and very dead, tree stump which is an integral part of the history of the Clarke gang.

Nelligen is located 9 km north-west of Batemans Bay and 284 km south of Sydney via the Princes and Kings Highway.

No one is sure how Nelligen got its name. By the late 1820s the local river was known as Nellican Creek. In 1827 the Surveyor-General for New South Wales, Thomas Mitchell, sent Thomas Florance and Robert Hoddle to survey the South Coast from Jervis Bay to 'Mherroyah' (Moruya) and from Braidwood to Araluen. By late 1829 Hoddle had laid out 640 acres of "good forest land at Nellican Creek". He offered no explanation for why the creek was named Nellican.

Historic Plaques
The best way to understand the district's early history is to walk and inspect the plaques which are located at significant points around the town. In the park beside the Clyde River there is a map of the original town (circa 1854) which identifies 24 sites of historic interest including the site of the original ferry service across the river (which ran from 1895-1964); the location of the first school (1865); the site of the Illawarra Steam Navigation Company's storehouse and offices - a double timber structure over 40 m long and 15 m wide which operated until 1952; the old Mechanics Institute; the Steampacket Hotel which was rebuilt in 1925 after a fire destroyed the original building which dated from the 1860s; and the  Nelligen Guest House, built in 1900 as the local Post Office and restored in 1990. There is a detailed Nelligen Main Street Study which can be downloaded at http://www.esc.nsw.gov.au/living-in/about/culture-and-heritage/heritage/Nelligen_Main_Street_Study.pdf and which provides extensive details of many of the town's most significant buildings.

The Bushranger's Tree and the Clarke Gang
On the western side of the Clyde River is a rather large, and very dead, tree trunk known as the 'Bushranger's Tree'. A plaque on the tree explains that this is: "The remains of the 'Bushrangers Tree' where it is maintained the Clarke Brothers were chained awaiting transportation to Sydney and execution on 25th June 1867 for multiple murders. The Clarke gang operated during the 1860s goldrush ambushing shipments from the Araluen and Nerrigundah fields, until cornered by troopers led by Aboriginal trackers in the Jingerra Ranges during November 1866."

The Clarkes were the sons of John Clarke, an Irish shoemaker who had been sentenced to seven years transportation and who arrived in Sydney Town in 1828. He was assigned to work for a pastoralist near Braidwood but, rather than working, he appears to have lived by stealing cattle. When gold was discovered in the district in 1852 John and his sons, Thomas and John Jnr, stole the gold miners' horses and then claimed the rewards. Old John claimed this trade was worth some £250 a year. John’s three sons and two daughters grew up without schooling or religious instruction "in an isolated community little less than a den of thieves, connected either by marriage or misdeeds".

By the mid-1860s the three brothers had established their criminal credentials. In 1863 John was gaoled for a year for horse stealing. In January 1865 James was sentenced to seven years for receiving the proceeds of a mail robbery and Thomas was awaiting trial for assault and robbery when the family managed to arrange his escape. Between October 1865 and May 1866 Thomas Clarke was credited with three charges of horse-stealing, eight robberies including two mails and post offices, the wounding of John Emmett and the murder of Constable Miles O'Grady at Nerrigundah on 9 April. In May Thomas Clarke formed a gang with his brother John and, as one observer wrote, "no more remarkable confederacy of robbery, violence and murder has ever been known to exist in any civilized community".

Failure to catch the Clarke gang led to a public outcry. Special police were sent to the Braidwood district in April 1866 but they were unsuccessful and were recalled. In September that year the Colonial Secretary secretly appointed John Carroll, a senior warder at Darlinghurst gaol, and three others to capture the Clarkes. In January 1867 Carroll and his party were murdered near Jinden station. The crime was credited to the Clarkes and a reward of £5000 was offered for their capture.

In March a force of experienced police were sent to Braidwood. On 27 April a party led by a black tracker named 'Sir Watkin' found the Clarke brothers near Jinden. A Constable Walsh, Sir Watkin and John Clarke were wounded in the subsequent gunfight but the Clarke brothers were captured.

The Sydney Morning Herald reported: "The two captured bushrangers were on Saturday night (the 27th ultimo) taken to Bollaby ; and thence on to Braidwood on the Monday following. A large concourse of horsemen went to meet them as they came into Braidwood, and by the time that they reached the gaol (about half-past 2 p.m.) there must have been at least 300 persons present. The two robbers seemed to be quite indifferent to the awful position in which they were placed, smiling with real or assumed carelessness as they were taken through the town. John Clarke had one arm in a sling, and his horse was held by a constable on either side of him. The elder Clarke was handcuffed, and his horse was also held by two troopers. A large body of police, well armed, formed the escorting party. The journey was performed without any impediment. A little after the party escorting the Clarkes came in the wounded black tracker, Sir Watkin, escorted by a trooper, who was leading his horse. The poor fellow had his arm in a sling, and seemed to be faint and weak from pain; scarcely able to keep his seat on the saddle."

At Nelligen there is the “Bushranger Tree” where the Clarke brothers were chained while they awaited shipment to Sydney where they were executed on 25 June, 1867. The executions effectively ended organised bushranging in New South Wales. There is a long and detailed history of the gang at http://trove.nla.gov.au/ndp/del/article/13143870. It is a story from the Sydney Morning Herald dated 4 May, 1867.

Cruising and House Boats
Nelligen has become well-known as a popular house boat destination. The largest operator is Clyde River Houseboats (check out http://www.clyderiverhouseboats.com.au/index.html for details and prices) which operates out of Batemans Bay and is an ideal way to experience the beauty of the Clyde River. The emphasis is on peace and tranquility and the joy of just mooching up a river and messing about on a boat.

Fishing in the Clyde River
Whether it is on a houseboat or throwing a line in from the shore, the Clyde River is recognised as a popular destination for anglers. Catches can include bream, flathead and jewfish and Clyde River oysters have an enviable reputation.

Corn Walk Trail
This is a challenging walk - 15 km one way and likely to take 6 hours on the downhill run - which follows the route used in the 1830s by the early settlers who brought their produce, mainly corn, across from the highlands, down the mountain ridges and through deep rainforest valleys. Some parts of the track are very steep and most people follow the trail downhill. The downhill run starts 31 km from Nelligen (turn at River Forest Road to the Dasyurus Picnic area). There is a downloadable brochure - check out http://www.eurobodalla.com.au/docs/long-walks-Oct-2010.pdf.

* Prior to the arrival of Europeans the land around Nelligen was inhabited by the Yuin people. The subgroups - Walbanga, Murrinjari and Bergalia - may have lived in the area along the river.

* In April, 1770 Captain James Cook sailed past Batemans Bay, named it, and observed the mouth of the Clyde River.

* In late 1827 the Surveyor-General of NSW, Thomas Mitchell, sent two surveyors, Thomas Florance and Robert Hoddle, to map the South Coast from Jervis Bay to 'Mherroyah' (Moruya) and from Braidwood to Araluen.

* By March 1828 Hoddle was surveying near Nelligen.

* In late 1829 Hoddle had laid out 640 acres of 'good forest land at Nellican Creek' for absentee landowner, Francis Moylan.

* By the 1830s timber cutters were in the district.

* In 1835 the Colonial Secretary was petitioned  for “a road from Braidwood to Bateman Bay whereby the Braidwood district settlers might ship their wool and receive supplies”.

* In the early 1850s gold was discovered at Araluen, Majors Creek, Captains Flat and Braidwood. Miners passed through Nelligen on their way to the goldfields.

* The road to the goldfields turned the town into a economic powerhouse. Gold was loaded at the Nelligen wharf onto boats which sailed to Sydney. One description of Nelligen in the 1850s declares it is "a stirring little township of bark huts, serviced by two large stores of S Richardson and Wilson and Bush from which 18 or 20 teams left daily to convey goods, brought by twice weekly steamers from Sydney, for Braidwood and its goldfields."

* 1858 saw the opening of the town's post office in Richardson's Inn.

* In 1860 a timber watch house was built with Courts of Petty Sessions being held from 1861.

* In 1862 alluvial gold was discovered at Kiamalla.

* An electric telegraph station was opened in 1878.

* A punt service was established across the Clyde in 1895.

* In 1925 the Steampacket Hotel was burnt to the ground.

* A fire in 1939 destroyed ten houses, the local cafe and both the Church of England and Presbyterian churches.

* The police station was closed permanently in 1940.

* The bridge at Nelligen replaced the ferry in 1964.

The local houseboat company, Clyde River Houseboats, has a good website with lots of information about the town - http://www.clyderiverhouseboats.com.au/south-coast-history.html. 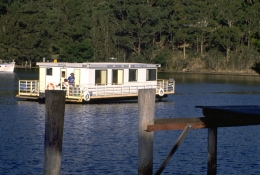 A houseboat on the Clyde River at Nellingen 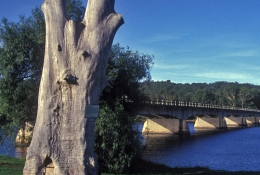 'The remains of the 'Bushrangers Tree' where it is maintained the Clarke Brothers were chained awaiting transportation to Sydney and execution on 25th June 1867.