Nelson is a small fishing and holiday village near the mouth of the Glenelg River - where the river meets the Great Southern Occean - in the south-western corner of Victoria. It is 6 km from the South Australian border. The town comprises the Nelson Hotel, a general store, a motel, holiday homes, a B&B and caravan parks. The remoteness of the area means that it has undergone little commercialisation. The estuary, river, rock ledges and beaches are noted for the fishing opportunities they afford and the tidal estuary has become a haven for waterbirds. River cruising and swimming are also popular.

Nelson is located 407 km west of Melbourne and 6 km from the South Australian border.

Nelson was named after the survey ship, the Lady Nelson, which was used by Lieutenant Grant to explore the southern coastline at the very start of the 19th century.

River Exploration and Boat Hire
Boats, cabin cruisers, dinghies and canoes can be hired at Nelson. There are good launching facilities and public wharves just below the bridge. The bar across the river mouth makes access to the sea dangerous. The main providers are Glenelg River Cruises, Nelson Canoe Hire and Nelson Boat Hire.

Glenelg River Cruises (tel: 08 8738 4191) offer a 3.5-hour cruise to the Princess Margaret Rose Caves. All cruises depart at 1.00 pm (Victorian time) but days of operation vary seasonally from once or twice a week to an almost daily service through the summer holidays. Check out http://www.glenelgrivercruises.com.au for details.

Nelson Boat Hire (see http://www.nelsonboathire.com.au or tel: (08) 8738 4048) is located on Kellett Street and offers hourly and daily rates on paddleboats, dinghys, cabin cruisers, pontoons and house boats. The vessels are ideal for enjoying the Glenelg River and fishing for mullet, salmon, perch,  mulloway and bream.

Nelson Canoe Hire (tel: 0409 104 798) specialises in daily and overnight canoe and kayak hire on the Glenelg River. Check out http://nelsoncanoehire.com.au for more details.

Nelson Beach
Nelson Beach can be accessed by taking the signposted turnoff from the Princes Highway east of the river and turning into Beach Road. The car park is at the end of the road and there is a track which leads through the sand dunes to the ocean beach. Beware: this is the Great Southern Ocean and it is considered dangerous for swimmers.

Fishing
Surf and rock fishing are popular in the area and the Glenelg River has mulloway, bass, southern black bream, yellow eye mullet and salmon. There are boat and equipment hire services in Nelson and the staff at the Nelson Boat and Canoe Hire can help with all fishing enquiries.

Lower Glenelg National Park
Lower Glenelg National Park (27,300 ha) is located to the north and north-east of Nelson and just to the north of Discovery Bay. It was created in 1968 to preserve the cliffs and the lower reaches of the 470 km Glenelg River which starts in the Grampians and flows through to the estuary at Nelson. The river was named by Surveyor-General Thomas Mitchell in 1836 during his Australia Felix expedition.
The Park's attractions include the river itself, the surrounding forest, the Princess Margaret Rose Caves and a spectacular 15 km limestone river gorge with cliffs which can be up to 50 metres in height. The limestone was formed millions of years ago from seashell debris at the bottom of a shallow sea. The water level later dropped and the river carved out the gorge. The park is popular for water skiing, fishing, scenic drives, walking, picnicking, camping and nature studies.
One of the park's highlights is the Glenelg River Canoe Trail. It is an ideal way to explore the river from Nelson all the way through to Dartmoor - a distance of over 75 km. There are no rapids. Canoes are available for hire at Nelson. There are seven special canoeists' (and kayakers) campsites along the river.
The park contains over 700 plant species in forest, swamp, river, dune and cliff habitats. It represents an unusual mingling of eastern and Western Australian types. Fauna includes platypuses, echidnae, koalas, kangaroos, water rats, wallabies, possums, potoroos, gliders and a rare colony of wombats. There is extensive information about the park at the Parks Victoria site - check out https://www.parks.vic.gov.au/places-to-see/parks/lower-glenelg-national-park.

Discovery Bay Coastal Park
Discovery Bay Coastal Park (10,460 ha) is an outstanding sweep of coastline which extends eastwards for 50 km along the coast to Cape Bridgewater. It includes rolling white sand dunes, wetlands, woodland forests, sweeping beaches, Aboriginal middens, tranquil lakes and rugged rock formations. There are grey kangaroos, red-necked wallabies and over 140 bird species. Coastal, swamp and heath vegetation is prolific. The park is accessed off the Nelson-Portland Road. Camping is available at Swan Lake and Lake Monibeong. There are boat-launching ramps in the park and surf fishing opportunities. For more details check out https://www.parks.vic.gov.au/places-to-see/parks/discovery-bay-coastal-park.

Cobboboonee National Park and Jackass Fern Gully Walk
Located 25 km south of Nelson via the Portland-Nelson Road, is Cobboboonee National Park. The park is a combination of lowland forests, heathlands and wetlands and has a number of interesting walking trails, two horse trails and six camp sites. Of particular interest is the Jackass Fern Gully Campground which is located at the headwaters of the Fitzroy River. In the early days of European settlement it was used as a crossing site and a watering place for bullock teams hauling logs from the forest. The site got its name from the distinctive Soft Tree Ferns which grow in the moist valley beside the Fitzroy River. Other ferns include fishbone ferns and maidenhair ferns. The ferns are protected and shaded by Blackwood Wattles and Hazel Pomadreeis which grow in the area. There is an interesting Jackass Fern Gully Walk which starts at the Jackass Picnic Ground and is an easy to medium grade walk of 6 km which takes 90-120 minutes. The track heads up the hill to Mt. Van Dyke, joins the Great South West Walk before crossing the Fitzroy River Bridge, and follows the track back towards the river and onto the T&W Road. There is a detailed map and information about the National Park at https://parkweb.vic.gov.au/__data/assets/pdf_file/0004/314536/Park-note-Cobbobonee-National-Park.pdf.

Princess Margaret Rose Caves
Located 17 km north of Nelson, the Princess Margaret Rose Caves are, for the visitor, a single cave which is open for guided tours and which is, reputedly, "the most decorated cave per square metre in Australia". Certainly the Princess Margaret Rose cave is a wonderfully simple experience. Visitors either arrive by cruise vessel from Nelson or drive to the car park. They walk to the visitor centre, explore the Interpretative Centre and then take a guided tour of the cave. There are camping facilities and three bush cabins are also available for overnight stays. Visitors start at the Interpretative Centre which tells the story of how the cave was formed and provides a history of how it was discovered and developed. Daily tours of 40 minutes duration are conducted at 10.00 am, 11.00 am, 12.00 noon, 1.30 pm, 2.30 pm, 3.30 pm and 4.30 pm. Reduced tour times in winter (June, July and August) 11.00 am, 12 noon, 1.00 pm 2.00 pm and 3.00 pm. tel: (08) 8738 4171. The single cave features spectacular stalagmites, stalactites and helictites (long, thin formations which grow in different directions rather than up or down). There are also cave coral formations, rimstone pools and sawtoothed shawls. For more information check out http://www.princessmargaretrosecave.com.

The Great South West Walk
The Great South West Walk, established in 1981, is a 250 km circular walking track which starts and finishes at Portland. Constructed by community groups it initially heads north from Portland through farmland, veering westwards through native forests and the Lower Glenelg National Park, following the southern bank of the Glenelg River to its mouth near Nelson, then returning eastwards along the coastline through Discovery Bay National Park. It then reaches Descartes Bay and passes around Cape Bridgewater, past The Springs, the Petrified Forest, the seal colony, Bridgwater Bay, Cape Nelson, Point Danger and back to Portland. Sections are accessible by car to allow shorter day or weekend walks. There is a hugely useful website. Check out http://www.greatsouthwestwalk.com.

* Prior to the arrival of Europeans the Nelson district was occupied by the Gunditjmara Aboriginal people .

* As early as 1798 Matthew Flinders reported the rich seal colonies on the Furneaux Islands in Bass Strait. This led to a sealing industry on the southern coast of Victoria.

* In December 1800 Lieutenant James Grant passed along the coast in the Lady Nelson.

* In 1802 the French navigator Nicolas Baudin sailed along the coast.

* From 1819 the bay at Portland was used by whalers and sealers.

* Surveyor and explorer Thomas Mitchell explored the area in August 1836. His party were the first Europeans to investigate the Glenelg River.

* In 1839 Surveyor C.J. Tyers marked the border between Victoria and South Australia.

* By 1845 the area was part of the Lake Mornebeong pastoral run.

* In 1848 R.R. Leake built a "summer house" which subsequently became a hotel.

* A punt service carried people across the river at the townsite from 1849.

* A bridge across the Glenelg River was built in 1893.

* In 1963 a second bridge across the Glenelg River was opened.

There is a very useful local website. Check out https://www.nelsonvictoria.com.au. 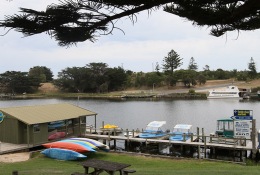 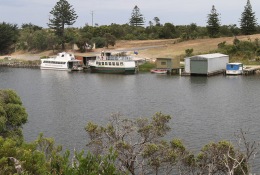 The Glenelg River at Nelson 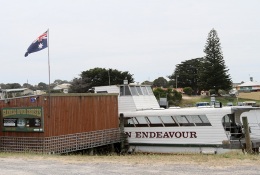 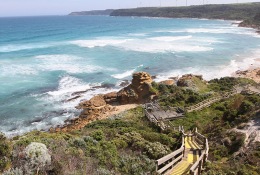 The steps to the beach at Discovery Bay Coastal Park 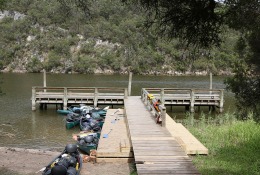