Impressive historic town on the Derwent River north of Hobart

It is a comment on the Englishness of Tasmania that there are towns like New Norfolk which are built around a large village green. Apart from its village green and its name, New Norfolk is a town with a large number of interesting historic buildings; the unusual Salmon Ponds at Plenty; an old Oast House; a 19th century asylum and some impressive stained glass windows in Tasmania's oldest church, St Matthews Anglican Church which dates from 1824. This is a peaceful, small town where visitors can still explore historic buildings which lie "cheek to jowl" with a very ordinary and modern service centre. History and a modern shopping centre sit next to each other.

New Norfolk is 30 m above sea level and 35 km north-west of Hobart via the National and Lyell Highways.

The first person to build a house at New Norfolk was Denis McCarty, who, although once a convict, had become a police constable and was sent to the area to deal with an influx of Norfolk Islanders who had arrived in 1807 and 1808. In 1811 Governor Lachlan Macquarie passed through the area and decided to name the small township after his wife. The infant village became known as Elizabeth Town until 1825 when the locals decided to name it New Norfolk. The town takes its name from the Norfolk Islanders who settled the area.

The Derwent Valley Visitor Information Centre has a small photocopied brochure which provides a map and descriptions of 44 places of interest around the town. Titled New Norfolk Historic Walks it claims you can wander around and see everything of interest in 30 minutes. This would be to do the town an injustice. Allow two hours and be prepared to drive out to Tynwald and the Oast House. Each building is of considerable historic interest. Here are some of the highlights:

4. Bush Inn
History has not been kind to the famous Bush Inn (1825) which claims to be the oldest continuously licensed hotel in Australia. Not surprisingly the hotel has hosted many famous guests. It is said that William Wallace, a composer, wrote an opera while staying in the hotel and there is a wonderful local legend that during a visit to New Norfolk in 1924 Dame Nellie Melba stood on the balcony and sang to the crowds below.

8. Arthur Square
This is a true rarity. A village green in an Australian town. It was approved as a green by Governor Lachlan Macquarie after he passed through the area in 1811. The placard on the edge of the green explains that "The Town was named Elizabeth Town after Governor Lachlan Macquarie's wife. The Lachlan Creek was to be known as The Thames. Norfolk Island settlers who came to 'The Hills' (New Norfolk's early name) disregarded Macquarie's orders and named the town New Norfolk after their island home and the rivulet they named The Lachlan after Macquarie. In early days the square was used for recreation purposes." Today it is a pleasant picnic and recreation area.

13. St Matthews Anglican Church
St Matthews Anglican Church in Bathurst Street opposite Arthur Square was built in 1824 and claims to be the oldest church in Tasmania. The church, which was originally built as a church and a school, was a response to a rapid increase in population in the district. By 1822 there were 600 people in the district. The Reverend Robert Knopwood, who had been the Government Chaplain in Hobart Town, retired to the town and regularly preached in the church which was consecrated in 1828 by Archdeacon Scott from Sydney. Over the years it has been the subject of numerous alterations including the removal of the bell tower in 1909. A tower was added in 1870 and in 1894 the chancel was added and the windows, roof and transepts were altered. All that is left of the original church are the walls and flagged floor of the nave and part of the western transept. The most impressive feature of the church is the excellent stained glass windows which are regarded as some of the finest in the country.

18.  Willow Court
'Willow Court' is a fascinating stone building which was constructed as a military hospital in 1830-31 by Major Roger Kelsall. It was originally conceived as a place where invalid convicts could be housed by Governor George Arthur. The main building is unusual being only one room wide but having wide verandas, gabled two storey structures at the corners and an impressive central section.  It was reputedly named 'Willow Court' because Lady Franklin planted a willow in the courtyard.

Willow Court is now part of the Royal Derwent Hospital and is the only, and reputedly the oldest, mental hospital in Tasmania. It is a remarkable and simple building of great elegance and character. Its military antecedents are obvious. It is part of a complex of buildings which includes "Olga" (which was once the Boys Cottage Hospital) and the Nurses Home. For more information check out http://www.newnorfolk.org/~willow_court. The entire area is currently undergoing major refurbishment.

26. Old Colony Inn
One of the town's most intriguing buildings is the Old Colony Inn at 21 Montague Crescent which dates from 1815 when it was nothing more than a cellar for storing hops. The brick upper floor was added by convict labour in 1835. It has changed usage over the years being variously a private home, a hotel, tearooms and craft shop.  Today it is boutique B&B accommodation. It has a charm which is decidedly English. It was probably built to cater for the coaches which started passing through the town in the mid 1830s. Check out more details at http://www.newnorfolk.org/~old_colony_inn.

28 & 29. Tynwald and the Oast House
When approaching New Norfolk from Hobart on the Lyell Highway the visitor can turn right into Tynwald Park where 'The Oast House' and the gracious old home 'Tynwald' are located.
Now known as Tynwald Heritage Accommodation & Restaurant, the Willow Bend Estate is one of the most elegant rural destinations in Tasmania. It is a gracious three storey house overlooking the Derwent Valley. The site was first used by John Terry, one of the district's earliest settlers, who developed the Lachlan River Mill nearby. Remarkably Terry had arrived in Van Diemen's Land with his wife Martha, their eight daughters, three sons and two millstones. The family arrived  in New Norfolk on 6 December, 1819 and almost immediately John Terry built the Lachlan River Mill. In 1822 he built a granary and by 1830 he had built Tynwald (although it was not named until much later) for his family. Terry died in 1844. His son, Ralph, introduced hops to New Norfolk in the 1860s and added the Oast House to process the hops. In 1898 a prominent politician, William Moore, purchased the family home and extended it dramatically adding the tower, bay window, veranda and iron lacework. He renamed it 'Tynwald' after the parliament on the Isle of Man. For more information check out http://www.tynwaldtasmania.com.

Today the Oast House has been converted into a museum, gift shop and tea room. It served as a working Oast House from 1867-1969. It stands on a hill overlooking what were once the extensive fields of hops. The museum in the Oast House has displays which explain how the hops were processed. It also depicts the hop farming methods which were used throughout the Derwent Valley.

Norse Skog
About 3 km downstream from New Norfolk are the huge paper mills now owned by Norse Skog and once owned by Australian Newsprint Mills. Opened in 1941 they are located on the Derwent River at  Boyer. The original mill was reputedly the first in the world to manufacture newsprint from hardwood. It employs 300 people and produces 290,000 tonnes of newsprint and other papers annually.

Salmon Ponds - Heritage Hatchery and Gardens at Plenty
Nine kilometres upstream from New Norfolk on the Glenora Road is the famous 'Salmon Ponds - Heritage and Hatchery'. Atlantic salmon were brought to Tasmania early in European settlement but it wasn't until rainbow and brown trout were successfully bred at this trout farm in 1864 (the Salmon Ponds were established in 1861) that Tasmania became famous as a destination for anglers. The original trout and salmon ova were imported from England. There is a detailed history of Salmon Ponds in the Museum of Trout Fishing and Hall of Fame. The appeal of Salmon Ponds exists beyond the fish although the enjoyment of feeding the fish is a constant source of pleasure to younger visitors. The setting is notable for the beautiful mature gardens with European trees; well tended lawns which are popular for weddings; and a hatchery which looks more like a collection of backyard goldfish ponds.

There is a poem by the much loved Margaret Scott (she became a minor celebrity on the TV show Good News Week before she died) which captures the magic of the Salmon Ponds perfectly:

'This formal garden with its lakes and lawns
gleams against the dim autumnal marsh
like an album portrait framed in weeping haze.
We linger on a rustic bridge to gaze
through smoked-glass gold of elm and beech to where
the full-fed salmon cruise the lily-beds.

For more information check out http://www.salmonponds.com.au/ which has infromation about opening times and admission fees.

* Prior to the arrival of Europeans the area around New Norfolk had been occupied by members of the Lairmairrener Aboriginal language group.

* The district was first explored by Europeans in 1793 when Lieutenant John Hayes of the East India Company sailed up the Derwent River and, when the river became too shallow, proceeded to row to a point just upstream from the present site of New Norfolk.

* In 1805 Joseph Holt rowed up the Derwent from Hobart and passed the current site of New Norfolk.

* The first person to build a house at New Norfolk was Denis McCarty, an Irish rebel who had been transported to New South Wales. By 1808 McCarty had become a police constable and been appointed to administer justice in New Norfolk.

* In 1811 McCarty hosted Governor Lachlan Macquarie who decided the township should be named Elizabeth Town, after his wife. The name never became popular but was used from 1811-1825 when it was changed it to New Norfolk.

* In 1812 McCarty was granted 50 acres at Boyer east of New Norfolk. He successfully petitioned for a road between Hobart Town and New Norfolk. He won the construction contract and proceeded to build it himself. That same year James Meehan, a surveyor, laid out the street plan for Elizabeth Town/New Norfolk.

* By 1815 Turiff Lodge, the Government Cottage, had been built for the Governors of Van Diemen's Land to use as a retreat from Hobart.

* In 1819 John Terry established the Lachlan River Mills downstream from the present site of New Norfolk.

* Anne Bridger was granted a licence for the Bush Inn in 1825.

* In 1827 the Military Invalid Hospital was transferred from Hobart to New Norfolk.

* By 1829 a regular coach service between New Norfolk and Hobart had commenced.

* The first bridge across the Derwent at New Norfolk was completed in 1840.

* By 1864 brown and rainbow trout were being bred at the Salmon Ponds.

* In 1868 the Duke of Edinburgh visited New Norfolk.

* In 1887 the railway between New Norfolk and Hobart was opened.

* In 1906 the Municipality of New Norfolk was formed.

* By 1928 a peg factory was established by the Pioneer Woodware Company.

* The Australian Paper Mills started manufacturing newsprint at Boyer in 1941.

There is a useful local website - http://www.newnorfolk.org - with detailed information about the attractions, accommodation and eating available around town. In 2018 the local business community launched a new site - https://newnorfolkonline.com - which is well worth visiting. 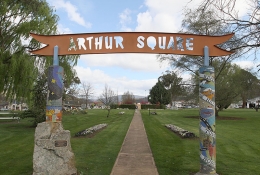 The new entrance to Arthur Square 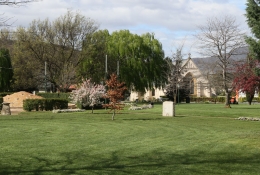 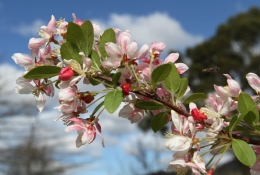 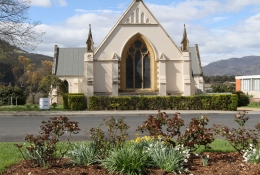 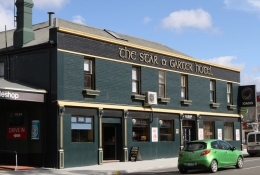 Star and Garter Hotel dates from 1831. 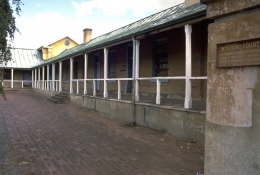 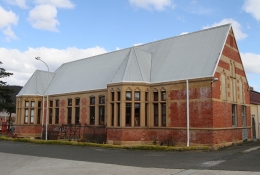 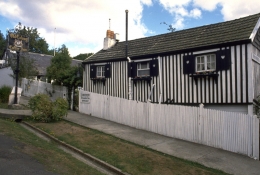 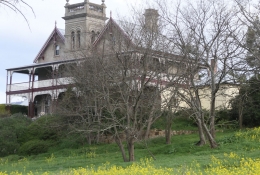 Tynwald House - one of Tasmania's most elegant Victorian residences. 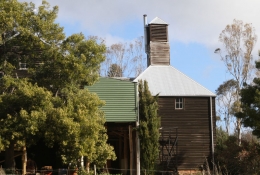 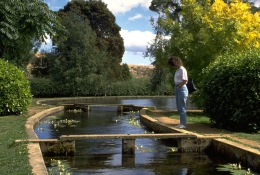