The drive from Lithgow to Newnes, through a valley cut into honey-coloured sandstone cliffs, is one of the most beautiful drives on the edges of the Blue Mountains. Today Newnes is nothing more than a general store and the Little Capertee Camping Area. In its heyday Newnes was a thriving oil shale town. Cross the Wolgan River by either 4WD or foot and a short distance from the general store are a remarkable array of well-preserved remnants of the oil shale operation -  old coke ovens, piles of bricks, crumbling walls, a huge brick chimney and an old railway cutting - a reminder that once Newnes supported a mining community and was a thriving and productive oil shale town.

Newnes is located 189 km north-west of Sydney via Bells Line of Road and 48 km north of Lithgow at the northern end of the beautiful Wolgan Valley.

The town was named after the London publisher, Sir George Newnes, who along with Sir William Ramsay (a Nobel-prize-winning scientist) and Sir James Joicey (the proprietor of the largest colliery in England) formed a company to exploit the oil shale deposits in the Capertee Valley.

Although Newnes has good signage and it is possible to make your way around the ruins and make sense of the remnants of the works, it just makes sense to get a copy of Wollemi National Park Walking Track Guide: Newnes & the Glow Worm Tunnel, published by the NSW National Parks and Wildlife Service and available at the Blue Mountains Heritage Centre, Govetts Leap Road, Blackheath, tel: (02) 4787 8877. It is also may be available at the Visitor Centres at Lithgow and Glenbrook and the General Store in Newnes.

Newnes Historic Ruins Walking Track
The grade is medium, the time needed is around 2 hours, and to reach the ruins of the old Newnes mining works the walker has to cross the river at the ford downstream from the Newnes Hotel/General Store. It is possible to drive across in a 4WD when the water is low or you can walk across the causeway. There is a track which follows the route of the original railway line to the entrance of the mining ruins. Personally I think the highlight of Newnes Historic Ruins is the row of coke ovens at the beginning of the walk. They are, as the brochure points out "a unique set of beehive kilns built before 1907 and used until 1911. They are the largest set of such ovens in Australia." The site has the remains of 90 ovens of which 13 are in good condition. Beyond the coke ovens on a semi-circular loop are a 15 metre high brick retaining wall, paraffin sheds, oil washing tanks, a distillation area, the ruins of the old town, a Naptha plant and other remnants of the once active mining site. One aspect of the track that particularly amused me was the way the loop returns to the car park along the route of the old railway where, on virtually every manmade mound, wombats have placed their very distinctive, matchbox-shaped lumps of poo. It is as if they are saying "You humans were here for a short time but we are here for all time and here's a piece of shit to let you know it." A sort of animal variation of the famous poem Ozymandias - a wombat equivalent to the lines "Look on my works, ye Mighty, and despair! Nothing beside remains". The Wollemi National Park Walking Track Guide: Newnes & the Glow Worm Tunnel has an excellent map and detailed descriptions of each area of the ruins.

Glow Worm Tunnel
The Glow Worm Tunnel Track from Wolgan Valley is of medium difficulty, is 8 km return and takes around 4 hours. As the brochure points out "The Glow Worm Tunnel area is popular for walks along historic railway alignments, for viewing Glow Worms and for appreciating diverse natural environments. Tree fern gullies, pagoda rock formations, tall cliffs and conspicuous bird life are highlights of walking in the area."

The Glow Worm Tunnel was built in 1906-07 as part of the 50-km railway line joining Newnes to Newnes Junction on the main Western Line from Sydney. The tunnel itself is 400 metres long. It has a 180 degree curvature, is very dark and is home to thousands of glow worms. These worms (4 cm when fully grown) are the larval stage of a fly which develops from eggs planted on the cave wall. The larvae drop sticky threads that trap small insects attracted to the light which is produced by the combination of body products and a regulated oxygen supply. The larvae shed their skin and become luminescent pupae which hang from the cave walls for about 12 days before emerging as adult flies, which also glow and live for no more than four days. The glow worms become more apparent the further into the tunnel you proceed. The Wollemi National Park Walking Track Guide: Newnes & the Glow Worm Tunnel brochure has very detailed instructions on the various ways to get to the tunnel.

Blackfellows Hand Cave (known as Maiyingu Marragu)
In the past, because there has been some desecration of this remarkable site, I have tended to simply say "If you want to see it, get details from the Lithgow Visitor Information Centre" believing that people prepared to go to so much trouble would be respectful. Well, here's a gamble. It is well worth seeing and this is how you get there: Drive towards Newnes from Lithgow on the Wolgan Road. When you reach the Blackfellows Hand Fire Trail follow it for about 800 metres. On the right there is an unmarked clearing. A track leads up the hill to the cliff line. Follow the cliff line to the left over fallen rocks. The cave is a broad overhang and the hand images are some of the best in the Blue Mountains. The cave is a huge overhang and the depictions of ancient indigenous hands and arms on the wall – some by children, others by adults – are superb. A National Parks and Wildlife visitor’s book explains: "The stencil art on the walls of this shelter were placed here by Aboriginal people. Most of the images were made by placing the hand or implement such as a stone axe against the wall and blowing a spray of ochre mixed with water from the mouth. It is thought that the rock art may be between 500 and 1600 years old and that the hand stencils are the 'signatures' of the people who lived in the area." There is also a stern warning sign at the cave which reads:  "Australian Aborigines made these drawings. They help us to understand the way of life which is now past. Once destroyed they cannot be replaced. Please do not interfere in any way with the art or with any part of this site. Under the National Parks and Wildlife Act, it is an offence to destroy, deface or damage any Aboriginal relic in New South Wales. Penalty: $1000 or imprisonment for six months or both."

* Prior to European settlement Newnes and the Wolgan Valley were on the border of lands occupied by the Dharug and Wiradjuri peoples.

* By the 1860s land in the valley was being taken up by local pastoralists.

* In the early 1880s prospectors for the NSW Shale and Oil Company explored the Wolgan Valley with a view to exploiting its mining potential.

* In 1903 George Anderson purchased land in Wolgan Valley and began mining the shale.

* In 1905 the Commonwealth Oil Corporation (COC) was formed in London. The COC venture was driven by London publisher, Sir George Newnes, Sir William Ramsay (a Nobel-prize-winning scientist) and Sir James Joicey (the proprietor of the largest colliery in England). They believed that the Capertee and Wolgan Valley had reserves of around 20 million tons of oil shale. Shortly after forming the company they purchased George Anderson's mining rights. It was not until the advent of the motor car that benzene, which had been an unwanted byproduct of oil-shale production, became valuable and made oil shale mining potentially lucrative.

* COC's biggest problem was that they needed a railway to transport their products out of the area. A railway line was constructed in 1906-1907 which joined Newnes to Newnes Junction which lay 50 km south on the main line from Sydney. It was a tortuous and difficult rail line which had to traverse a 536 m drop from the Newnes Plateau and pass through two tunnels, the largest (now known as the Glow Worm Tunnel) being 400 m long.

* 1907 saw Newnes become a substantial mining town. A school was opened and its first enrolment was 52 pupils. Also opened in that year were a general store, a billiard hall, a butcher's shop, a newsagency and a hairdressing salon. A brickyard was established for local construction and successful coal mining soon got under way. It was meant to power the oil shale works but soon the coking coal produced at Newnes was being shipped out and sold.

* The COC employees went on strike over rates of pay at the end of 1908.

* They returned to work in 1909 but industrial unrest continued and another strike occurred in 1911.

* In February, 1912 the works were shut down. By this time COC had invested £1.6 million but was finding the retorts, imported from Scotland, were not working properly. They tried to raise more money but were forced into receivership.

* In 1914 COC entered a joint venture with John Fell & Co (a company experienced in oil shale mining) and after the kilns and retorts had been reconstructed and improved, the oil shale operation re-commenced with improved levels of extraction. In a 19-month period the company produced over 20 million litres of crude oil, 17.7 million litres of refined oil and 1.364 million litres of benzene.

* The plant was closed down in 1927 and John Fell & Co was wound up. The Newnes mine was sold and reopened in 1929 but the venture lasted only six months.

* The government, in an attempt to find work for the unemployed during the Great Depression, reopened the works in 1931 but the venture had failed by 1932.

* The railway line was dismantled in 1940 and sent to the Middle East to serve as beach defences. The remainder of the machinery on the site was sold for scrap in 1946.

* The hotel continued to operate until in 1986 a flood undermined the structure. It was moved to its present site but closed down as a hotel in 1988.

* Today Newnes is a pleasant place for bushwalking, camping and exploring the fascinating history of the oil shale works which were once considered the richest and most productive in the world.

There is a delightful, and very useful, local website run and created by Alan Watson, the proprietor of the Newnes General Store. Check out http://users.tpg.com.au/newnes/ 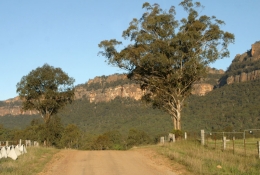 The dirt road to Newnes with the honey-coloured cliffs rising from the Wongan Valley. 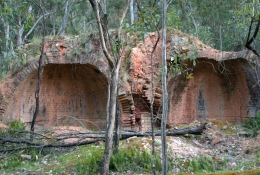 The remnants of the Coke Ovens at the Newnes Oil Shale ruins. 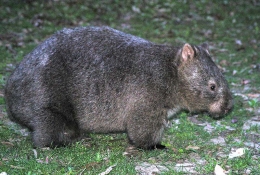 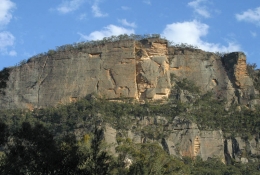 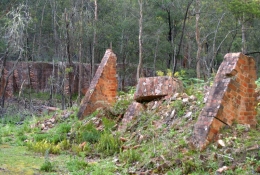 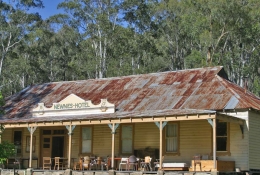 The Newnes Hotel (1907) now the General Store and the only building left from what was once a thriving mining town. 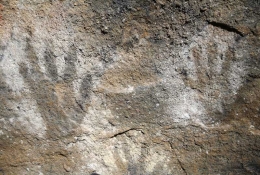 Hand stencils on the walls of Blackfellows Hand Cave (known as Maiyingu Marragu). 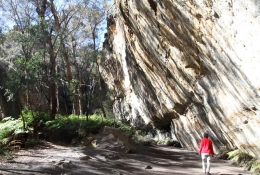