Noojee is tiny village on the road to the Mount Baw Baw ski fields. Originally settled by gold prospectors during the 1860s, it became a town sustained by the timber industry. Today it is predominantly a tourist town with a cafe, general store and the Noojee Hotel which is located overlooking the La Trobe River. Surrounded by rolling green hills and densely-wooded forests of Mountain Ash, it has a simple and charming timelessness.

Noojee is located 129 km east of Melbourne via the Princes Highway and 38 km north of Warragul.

It is likely that "Noojee" is a local Aboriginal word meaning "a place of rest" or, more simply, "stop" or "cease".

The Trestle Bridge
Located off Mount Baw Baw Road 2 km to the west of the town, the trestle bridge, built in 1919, is 102m long and 20m high. It is said to be one of the largest of its type in the Southern Hemisphere. It was rebuilt in 1939, after being burned down in the massive bushfires of that year, which, for the second time in 13 years, had managed to burn most of Noojee to the ground. Constructed from local timber, it is regarded as fine example of the quality of work carried out by the Gippsland railways at the time. After its closure, the Buln Buln Shire Council purchased a rare, timber trestle bridge from the railways for $2. It is now registered with the National Trust. There is a map outside the Noojee Fire Station which describes the walking track to the bridge. There is a very detailed account of the bridge on the Victorian Heritage Database which notes: "The Rail Bridge at Yarra Junction-Noojee Road, Noojee is architecturally significant as a unique and essentially intact example of a railway trestle bridge. It is significant at a state level as the tallest surviving trestle bridge in Victoria, further enhanced by its curved alignment. The bridge is a notable example of timber trestle bridge construction, demonstrating a distinctive and presently rarely used construction method that utilised native bush timbers.
"The Rail Bridge at Noojee is historically significant, recalling the former role of the Noojee railway in the district. The bridge opened in 1919, enabling the Noojee Railway (which had opened as far as Neerim South in 1890-2) to be used for the transportation of timber and local farm produce from Noojee district to the main towns." For more information check out http://vhd.heritagecouncil.vic.gov.au/places/881.

Loch Valley Tramway Walk
Starting at the Ralph Cornwall Picnic Area, this 5 km (return) easy walk along the banks of the Latrobe River traverses an historic timber tramway, passes through rainforest and stands of Mountain Ash, and crosses a suspension bridge. For more information check out http://www.visitbawbaw.com.au/walking-cycling/loch-valley-tramway-walk.

Toorongo Falls Reserve
Located 10 km north-east of the town is a pleasant 2.2 km bushwalk to Toorongo and Amphitheatre Falls. The walk to Toorongo Falls will take around one hour and covers 1.5 km, then there is an additional walk to Amphitheatre Falls which, in total, is 2.2 km and takes around 1 hour 20 minutes. For more information check out the downloadable brochure at http://www.depi.vic.gov.au/__data/assets/pdf_file/0017/225701/Toorongo_Falls_Reserve.pdf. The notes point out that "The Toorongo Falls Scenic Reserve comprises of mostly wet forest types with the most common over-storey and mid-storey species being Mountain Grey Gum, Mountain Ash, Manna Gum, Blackwood & Austral Mulberry. A variety of ferns thrive in the damp conditions including the Necklace Fern, Soft Tree Fern, & the Long Fork-fern. The reserve supports a range of native animals, including the Common & Mountain Brush Tailed Possum, Ring Tailed Possum, Sugar Glider, and a variety of bats. Red Bellied Black Snakes are relatively common during warmer periods. If you come across one, keep your distance and remember they are fully protected and are an essential part of the forest ecosystem."

* Prior to the arrival of Europeans the area was occupied by people from the Woiworung Aboriginal language group.

* Settlers, mostly timber cutters, moved into the district in the 1880s.

* The town developed after 1919 when the railway was built from Warragul to Noojee to transport the felled timber. The line required seven trestle bridges.

* In the 1930s the Forests Commission established a Boys Camp to train boys in forestry.

* The line was last used in 1954 when large numbers of the locals travelled to Warragul to see Queen Elizabeth II during her first visit to Australia.

* The town was evacuated in 1983 when bushfires threatened.

* Today the town is a stopover for people heading to the snow at Mount Baw Baw.

The town has no visitor information centre. 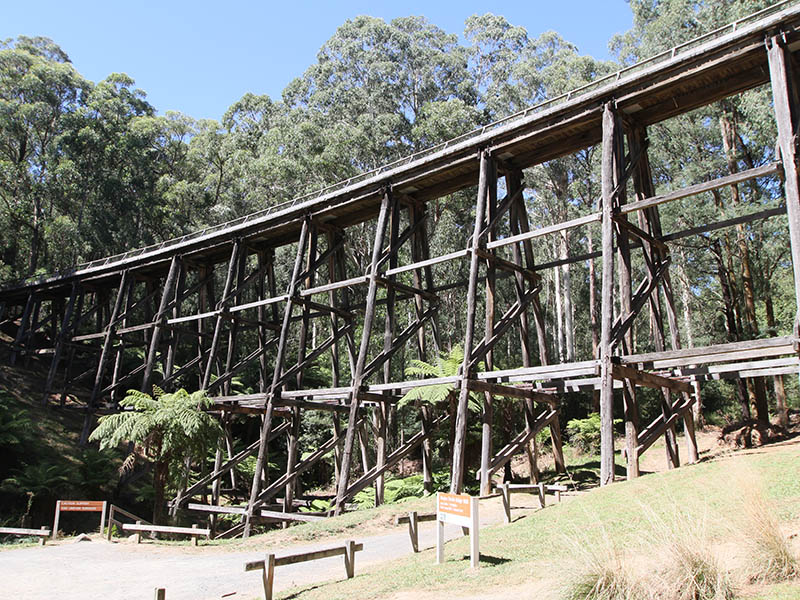 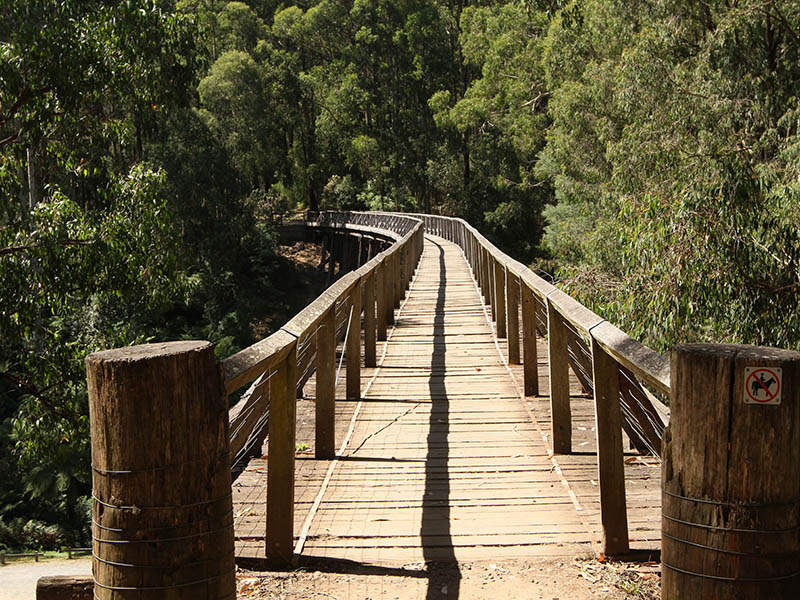 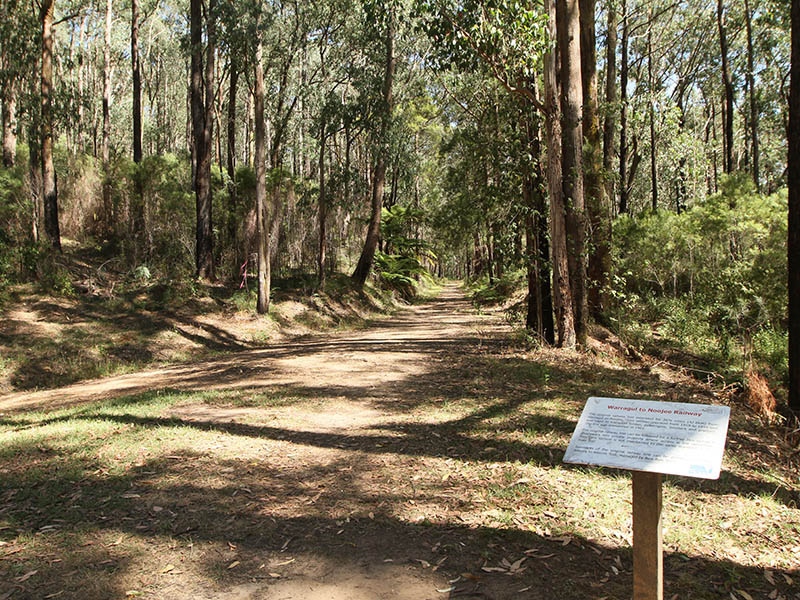 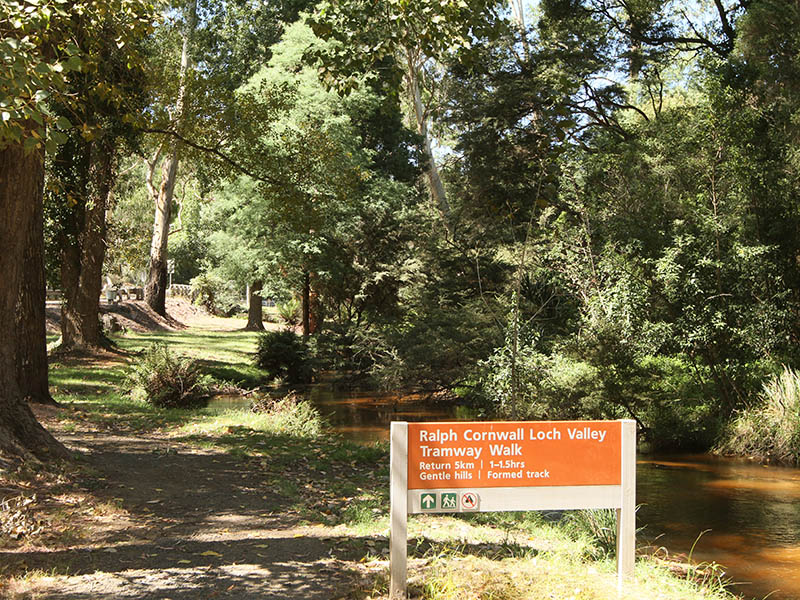