Chic holiday and retirement town on the Sunshine Coast.

The ideas of 'sophistication' and 'beach holiday' do not fit happily into the same sentence in Australia. The traditional beach holiday was in a shack or caravan. It involved dressing down and wearing rubber thongs and cheap casual clothes. And it usually meant dining out on takeaway and lots of ice cream, milk shakes and fizzy drinks.

In the early 1970s Noosa changed all that. It brought the elegance and sophistication of inner city 'village' living - Toorak in Melbourne or Double Bay in Sydney - to the Queensland coast. It changed from a quiet seaside town with a few anglers and casual holidaymakers into a destination which attracted international celebrities and which became a place in the sun for wealthy Melbourne and Sydney people wanting an upmarket Australian destination. Today Hastings Street, Noosa's main street, is awash with cafes, galleries, boutique fashion houses, restaurants and people prepared to spend good money for good quality products. Noosa is classy in a way that few towns on the Australian east coast are. It is upmarket, classy and fashionable in a land where downmarket egalitarianism rules supreme.

Noosa Heads is located 141 km north of Brisbane via the Bruce Highway.

The local Kabi Kabi people called the headland, now known as Noosa Head, Wantima which meant simply 'rising up' or 'climbing up'. The first Europeans into the area, honouring the first 'settler', named the headland Cape Bracefield or Bracefield's Head. The decision to name it Noosa Head was based on an understanding that the Kabi Kabi word written down as 'noothera' or 'gnuthuru' meant 'shadow' or 'shadowy place'. A reference to the shady nature of the headland, perhaps?

Noosa National Park
Noosa National Park is so close to both Noosa Beach and Hastings Street that it inevitably attracts most of the Noosa holidaymakers because it is accessible and a stark contrast to the town's other activities. It covers more than 4000 ha but is not a continuous park. It is composed of several disconnected pieces of land. These are divided into three sections:

(a) Noosa Headland
Noosa Headland (477 ha) lies to the east of Noosa and has five short walks. For a map: download from http://www.nprsr.qld.gov.au/parks/noosa/pdf/noosa-headland-map.pdf.

The five walking tracks all start from the park entrance at the end of Park Road on Laguna Bay.

(1) The shortest is the Palm Grove Circuit (1 km) passes through rainforest above Mitt Street and Park Road.
(2) The Tanglewood Track is 4.2 km one-way and goes around Noosa Hill and connects up with the Coastal Track and heads out to Hells Gates. It passes through stands of  rainforest as well as open forest and heathlands.
(3) The Noosa Hill Track is a 3.4-km circuit which climbs through open forest to Noosa Hill and shares a return path with the Tanglewood Track.
(4) The Coastal Track is 2.7 km one-way and follows the coastline past Boiling Pot to Tea-Tree Bay,Dolphin Point, Granite Bay and Hells Gates. It can join up with the Tanglewood Track and return to Park Road or continue along the beach at Alexandria Bay, pass Devils Kitchen and come out at the northern end of Sunshine Beach.

There is a fifth track through the park which starts at  Parkedge Road or McAnally Drive at the northern end of Sunshine Beach and ends at Alexandria Bay. It is 2.3 km one way and can join the Tanglewood Track or Coastal Track and take walkers to the Park Road entrance.

The appeal of this section of the park is the combination of rocky cliffline, excellent views out to sea, attractive sheltered beaches and coves, and a great floral diversity which includes grassland, scrubland, heathland, open forest and rainforest.

The fauna of the park includes koalas, glossy black cockatoos, ground parrots and the wallum froglet.

There is a downloadable map: http://www.nprsr.qld.gov.au/parks/noosa/pdf/emu-mt-peregian-track-map.pdf

There are three tracks

(1) the Hakea Track, notable for its hakea shrubs, which runs from Havana Road East through to Tritonia Drive.
(2) the Emu  Mountain Summit Walk which rises 71 metres to the top of Emu Summit and affords excellent views of the surrounding countryside and
(3) the short 400 m Ocean track with traverses the sand dunes from David Low Way to the shoreline of Peregian Beach South.

(c) the East Weyba section
The Weyba section extends southwards from Weyba Downs, at the south-western end of Lake Weyba, which is noted for its wetlands. It is edged by Emu  Mountain Road. Spring is an ideal time to visit to enjoy the wildflowers, the extensive birdlife and the best weather. There are no marked tracks but a number of fire management trails.

For further information check out http://www.nprsr.qld.gov.au/parks/noosa/about.html which has descriptions of all the walks. The National Park Information Centre is located in Park Road near the entrance to Noosa National Park and is open from 9.15am-4.45pm, tel: (07) 5447 3522.

Cooloola National Park
Lying to the north of Noosa Heads and stretching for about 60 km up the coast to Rainbow Beach and the edge of Fraser Island is the Cooloola National Park (56 600 ha) forms the southern portion of Great Sandy National Park. It is a superb stretch of peaceful coastal countryside north of one of the most densely populated areas on the Queensland coast.

An easy access point is the Noosa Car Ferry at Tewantin. For details check out http://www.noosacarferries.com. The ferries leave every six minutes between 5.30am-10.20pm Sunday-Thursday and 5.30am-12.20am on Friday and Saturday.

Cooloola National Park (Bushwalks)
Cooloola offers many bushwalking opportunities which are best enjoyed when the wildflowers bloom in the spring. Walking leaflets are available from the Noosa Visitor Information Centre and a brochure can be downloaded at http://www.nprsr.qld.gov.au/parks/cooloola/pdf/visitorguide-cooloola.pdf.

There are many different tracks. Signs at the beginning of each walk indicate the distance. The longest walk is the Cooloola Great Walk (check http://www.nprsr.qld.gov.au/parks/great-walks-cooloola/ for details and requirements) (102 km one way) which joins Noosa North Shore in the south to Carlo Entrance at Rainbow Beach in the north. It takes in a number of bushcamping areas ranging from those with no facilities to sophisticated camping sites like Harry's Camp near Lake Coolola. The National Parks estimate that the entire walk takes five days although it can be extended or shortened. It can be enjoyed any time from April to November. Sections are often flooded in the summer and early autumn so check on conditions before departure.

(1) The Elanda Circuit (5.1 km) takes in melaleuca and casuarina forests with a 400-metre detour to Mill Point to see the remnants of a milling settlement which existed from 1862-1892.
(2) The Kinaba Track (6.1 km one way) which starts at Elanda Point and passes through grasslands and cabbage palm and paperbark wetlands.
(3) Melaleuca circuit at Fig Tree Point - a 500-metre walk along a wetlands boardwalk through cabbage palm and paperbark wetlands.

* The first holidaymaking European to discover the secret charms of Noosa was the convict 'Wandi' (David Bracefell/ Bracewell/Bracefield) who, although he was incarcerated at Moreton Bay and was serving a 14 year sentence, kept escaping and walking up the coast to his favourite beach haunt. Between 1827 and 1839 Bracefell escaped five times from the Moreton Bay penal colony. Each time he  headed north to live with the Noosa Aborigines, the Kabi Kabi people. He was eventually discovered by Henry Russell Petrie who was exploring the coast in 1842.

* The development of the Noosa-Tewantin area was slow. Timber-cutters moved into the district in the mid-1860s and, as a result of their success in the hinterland, a sawmill was built at Tewantin.

* In 1869 the estuary of the Noosa River was surveyed. It was hoped that it would be suitable for a port. In 1870 Tewantin was opened as a port. It was used to ship timber out and bring gold prospectors to the Gympie goldfields.

* In the 1920s developers began to see the district's tourist potential although at this time there were still only around 600 visitors coming to Noosa each year. The community had grown to a point where a surf lifesaving club was created in 1927 and the Noosa National Park was established in 1930.

* The boom in tourism did not occur until the 1960s and 1970s and this led inevitably to conflict. In 1970s local conservationists fought to stop two sandmining companies from mining the Cooloola National Park. There was also strong local opposition from people who did not want high-rise and canal development.

* In 1990 the who region was the subject of great arguments when it was decided that Coolum would be the ideal site for the Multi Function Polis - a kind of 'brave new world' vision of an entire residential-industrial complex. Not surprisingly local residents passionately denounced the plan and the MFP was never built.

The official site is http://www.visitnoosa.com.au which provides extensive information on accommodation, eating and activities. 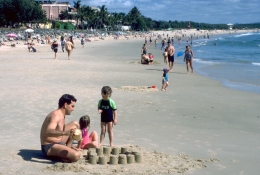 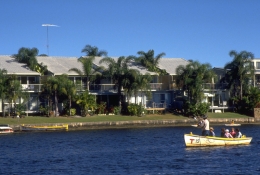 Fishing near the Noosa-Tewantin Apex Bicentennial Park in 1993