Given that Avoca, Terrigal and The Entrance are the major coastal destinations on the New South Wales Central Coast, Norah Head has the quality of a rather sleepy Cinderella. It has a particularly beautiful lighthouse, a pleasant rock pool and a cliff top walk which offers panoramic views across the Pacific. It is a sleepy settlement which lies on the Central Coast Highway north of Tuggerah Lake and directly east of Lake Munmorah and Budgewoi Lake. The lakes are an obvious magnet. The water, on average, is less than 2 m deep, shark-free and suitable for water skiing, canoeing, sailing, rowing and sailboarding. The lakes are also ideal for anglers with blackfish, whiting, mullet, snapper, bream, flounder, tailor, flathead, jewfish and tarwhine all waiting to be caught at the end of a line. On either side Norah Head has the beautiful activity-rich parklands of Wyrrabalong National Park and the Munmorah State Conservation Area.

Norah Head is located 113 km north of Sydney via the Pacific Motorway and Sparks Road.

Norah Heads was known as Bungaree Noragh Point as early as 1861. From there it was a relatively short change to Norah Head and, in the case of Edward Hargraves' home, Noraville House.

Norah Head Lighthouse
The Norah Head lighthouse, built in 1903, is the last colonial built lighthouse on the New South Wales coast. It was also the last staffed lighthouse. It was staffed for over 90 years and was finally de-staffed in 1994. The lighthouse and the buildings surrounding it were constructed from precast concrete blocks using a design influenced by the great colonial architect, James Barnet. Precast concrete was only used for lighthouses in New South Wales three times - at Point Perpendicular (1897), Cape Byron (1901) and Norah Head.

The lighthouse is 27.5 metres high and has a beam which can be seen 28 km out to sea. Only two ships have been lost off Norah Head. In 1917 the small 219 tonne Nerong was wrecked and in 1940 the 1052 tonne Nimbin was sunk after hitting a German mine with the loss of seven lives. It is significant that before the lighthouse was built ten ships had been wrecked at Norah Head between 1894-1903.

The area around the lighthouse is ecologically important as it contains vulnerable flora including Camfield's gum and vulnerable fauna including the squirrel glider, white tern, sanderling and providence petrel.

The stacks of Munmorah and Vales Point Power Stations are visible to the north-west. Looking north Stockton Beach can be seen in the distance making its way eastwards to the tip of the Tomaree Peninsula, near Port Stephens, nearly 80 km distant. Tiny Jewfish Point is visible offshore 3.5 km to the north with Bird Island further north and out to sea. To the south is Pebbley Beach and Soldiers Point.

Below the lighthouse is a rock platform which anglers claim is ideal for catching salmon, drummer, tailor, jewfish and snapper. There is a very detailed history of the lighthouse at http://www.heritage.gov.au/cgi-bin/ahpi/record.pl?RNE1489

Headland Nature Trail
There is a very pleasant walk from the Bush Street Reserve to the Norah Head lighthouse. It is only 2.2 km long, involves a modest climb of 65 metres and takes about an hour. The walker can enjoy the broad vistas of the coastline, views from the cliff tops, a view over Norah Head Rock Pool and Cabbage Tree Harbour, the Merchant Mariners Memorial, the Norah Head lighthouse and the rock platform below the lighthouse. There are a number of parks and viewing spots along the headland. Information about the walk can be accessed at http://www.wildwalks.com/bushwalking-and-hiking-in-nsw/norah-head/norah-head-nature-trail.html - a map and track notes can be downloaded.

Soldiers Point
The headland south of Norah Head is Soldiers Point which has views over Pebbley Beach on the northern side and Soldiers Beach, a popular surfing beach, on the southern side. On a clear day the view south from Soldiers Point is one of the best on the coast. It is possible to see The Entrance, First Point south of Avoca Beach and Barrenjoey Headland at the northern end of Palm Beach.

Noraville House
Noraville House, a private home not open to the public and located at 3 Elizabeth Drive just one block from the Central Coast Highway, was built by Edward Hargraves, the prospector who, in 1851, was credited with discovering the first payable gold in Australia. In the 1850s Hargraves purchased 640 acres at Noraville and built one of the first houses in the district. It was modelled on his grandfather's house in England. Made of cedar it has a large veranda with intricately carved supporting posts and pilasters and an elaborate front gate. Hargraves' wife, Elizabeth (after whom the street is named), was the first white woman to settle in the area.

The park's northern section stretches from the shore of Tuggerah Lake across to Tuggerah Beach and Pelican Point and covers the dune system which separates the lake from the beach. Although the surrounding area is quite urbanised, this narrow strip of coastal land contains a considerable diversity of fauna and flora, including the lace monitor, flying fox, bandicoot, squirrel glider, diamond python, possum, New Holland Mouse, antechinus and many birds.

The ocean side is mostly coastal dunes with beach access via Pelican Beach Rd (at the northern end) and the Tuggerah Beach Walking Track (700 m) which leads to a popular surfing and fishing area.

On the western side of the Central Coast Highway the park has a number of walking trails. There is the 2.3 km, easy, Red Gum Trail, a pleasant walk through angophoras, remnants of littoral rainforest, and some open scrubland and wetlands. There is also the longer Lillipilli Loop Trail (4.6 km, easy) which is a circuit through rainforest, corkwoods, cabbage tree plains and beside the Tuggerah Lake wetlands. The Wetland Trail runs off the Red Gum Trail (it is only 900 metres of easy walking) and crosses swamp mahogany and paperbark-fringed wetlands. These tracks can be accessed from two car parks on the western side of the Central Coast Highway. It is possible to download a brochure, complete with a detailed map, at http://www.environment.nsw.gov.au/resources/parks/brochures/120229WyrrabalongNPBrochure.pdf

Budgewoi
Located only 6 km north of Norah Head, Budgewoi (meaning 'young grass') sits between Budgewoi Lake and Lake Munmorah. It is a quiet destination suitable for families and anglers. There are boat ramps, a large shady reserve with picnic and barbecue facilities and a footbridge across to a tiny island. From Mackenzie Reserve there are views northwards over Lake Munmorah and Slade Park is edged by Budgewoi Lake.

Munmorah State Conservation Area
Munmorah State Conservation Area is one of those hidden coastal delights which offers quietness, few crowds, great natural beauty and lots of opportunities to experience unspoilt beaches, dramatic headlands and a coastline unsullied by commercial development. There are two entry points: Birdie Beach Drive off Elizabeth Bay Drive and Blue Wren Drive off the Pacific Highway. This is a National Park and there is an entrance fee.

The park stretches across 1500 ha of coastal land, is edged at the southern end by the shore of Lake Munmorah and offers a range of activities including cycling, sailing, fishing, surfing, bushwalking and picnicking. The flora ranges from wetlands through forests, woodlands, littoral rainforests and heath communities.

Melaleuca Track / Birdie Creek and Coast Tracks (7.2 km one way - medium) - As the brochure explains "This walk can be completed in several sections. Commencing at the southern park entrance on Birdie Beach Drive, this track travels through a swamp / sedgeland paperbark forest, on to a dry ridge scribbly gum community and out onto a spectacular coastal heath. Take in views of Norah Head and Bird Island before a short walk to conclude at Frazer Beach."

For visitors who want to explore the park by driving there are a number of excellent vantage points:

Wybung Head and Wybung Trig Lookout
Along Wybung Head Road is Wybung Trig Lookout, one of the finest views to be found on the entire Central Coast. It looks south over Bird Island to Norah Head Lighthouse, south-west over Lake Munmorah, Budgewoi, Budgewoi Lake and Munmorah Power Station, west to Chain Valley Bay and beyond to the mountains, north-west over Lake Macquarie to the stacks of Eraring Power Station and north to Newcastle Harbour and Stockton Beach. There is a track, the Geebung Heath Track, which leads down to Birdie Beach

At the end of Wybung Head Road is a car park looking down on Wybung Head. The dramatic rock forms on the headland are the product of warping, erosion and ruptures of a surface formed in part by the sedimentation deposited by a river which ran from the mountains in the west and had its estuary at this location. Walk down to the headland where anglers fish from the rock platforms. In spring Munmorah State Recreation Area is alive with beautiful native wildflower displays. There is a downloadable brochure which contains information about walking, camping and rock fishing in the Conservation Area. Check out http://www.nationalparks.nsw.gov.au/~/media/visitor/files/PDF/Brochures/munmorah-sca-pdf.aspx

Prior to European settlement the area around Norah Head and Tuggerah Lake was inhabited by members of the Awabakal Aboriginal language group.

* The last Aborigine in the area was Billy Fawkner who was often seen rowing his bark canoe across Tuggerah Lake. When he died in 1875 he was recognised as 'the last of the Brisbane Water blackfellows'. The rest of his tribe had died from introduced diseases or been killed in the process of dispossession and land acquisition.

* In 1796 after a ship was wrecked on the coast a party from Sydney Town reached the area and discovered the lakes.

* By 1828 a man named John Slade had taken up land on the shores of Tuggerah Lakes and another settler named Robert Henderson owned land at what was then known as Bungaree Norah.

* The Norah Heads area was surveyed in 1830 and by 1833 Cabbage Tree Harbour was being used as a port to ship cedar, cut in the hinterland and floated across the lakes, to Sydney.

* In the 1880s the Sydney-Newcastle railway was completed and the Central Coast became popular as a health and leisure destination for Sydneysiders who began to travel by boat, train and horse-drawn vehicle to go fishing, bathing and walking around the lakes.

* In 1903 the Norah Head lighthouse was completed. It was electrified in 1961 and by 1983 was completely automated.

There is no Visitor Information Centre at Norah Head. The closest are the Toukley District Art & Tourist Information Office, Wallarah Road, Gorokan, tel: (02) 4392 4666.

There is a good, detailed history of Norah Heads at http://www.jenwilletts.com/norah_head.htm 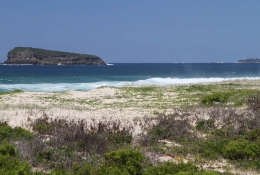 Birdie Beach in Munmorah State Conservation Area looking south across to Bird Island and down to Norah Head lighthouse. 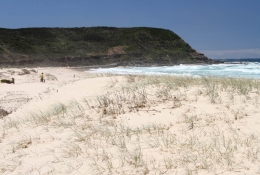 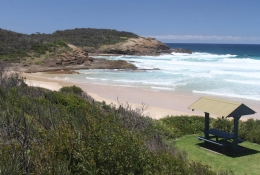 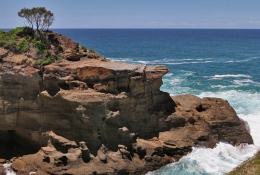 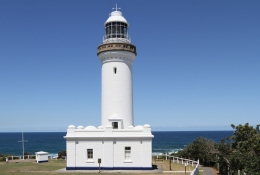 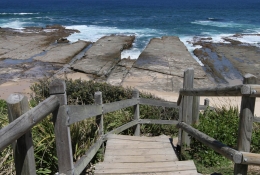 The steps leading down to the rock platform below Norah Head lighthouse. 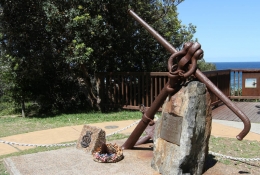 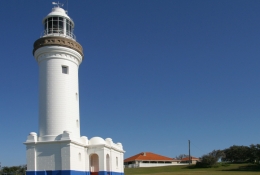