Nungarin is a typical Western Australian wheat and sheep town which has a main street with bulk loading facilities, a railway siding on one side of the road and a pub and a few shops on the other side. Its primary appeal lies in its remarkable Nungarin Heritage Machinery and Army Museum, its historic Woolshed Hotel, the important National Trust's Mangowine Homestead, and a number of granite rock outcrops which offer excellent views over the surrounding countryside and are destinations for visitors wanting to admire the local wildflowers in the spring.

Nungarin is located 285 km north-east of Perth and 285 m above sea level.

An expedition in 1865 passed through the area and marked 'Noongarin Rock' on the map. It was the first mention of Nungarin. No one knows what the word meant in the language of the local Aborigines but one plausible explanation is that it derived from 'nungoo' meaning 'to see' and therefore Nungarin Rock was the 'place of seeing'.

Nungarin Heritage Machinery and Army Museum
The Nungarin Heritage Machinery and Army Museum is located at 26 Second Avenue. It is housed in an Army Vehicle Workshop which was built, for an estimated £10 million, in the town in 1942-1943 as part of Australia's defence. It was, reputedly, the largest storage facility for Army Ordnance in Western Australia. The display includes an impressive 10th Light Horse collection dedicated to local World War I hero Trooper Joseph William Spillman who was a veteran of the Gallipoli and Palestine campaigns and one of only 15 light horse men to have been awarded the Military Medal. There is also a Dingo Scout Car, Stuart Tank, Bren-Gun Carrier and an extensive range of military uniforms. As well there is a collection of photographs and memorabilia. It is open  9.00 am - 4.00 pm Monday to Friday and a Big Breakfast is served on Sundays from 8.00 am - 10.00 am. Tel: (08) 9046 5040. For more information check out https://nungarinmuseum.com.au.

Woolshed Hotel
Located at 58 Railway Avenue, the Woolshed Hotel is a classic wheatbelt hotel. It was built in 1927. It is historically significant as a rare example of a Kalgoorlie Brewery Hotel (they built a number of hotels in the 1920s) which is still standing and largely in its original condition.

Mangowine Homestead
Located 13 km north west of Nungarin via Williams Road, Mangowine Homestead was built by Charles and Jane Adams in 1875 and was handed over to the National Trust in 1968. The home is open is open Monday, Tuesday, Thursday and Friday from 1.00 pm to 4.00 pm and on weekends and Public Holidays between 10.00 am to 4.00 pm. It has been furnished to reflect a home in the 1870s.
The Adams family were the first settlers in the area. Charles Adams and James Ward took up 20,000 acres to run sheep in 1869. In 1875-1876 Charles Adams built Mangowine Homestead. The walls were made of stone and mud bricks bonded with mud mortar. The windows were constructed of adzed timber and the roof was covered with thatch cut from the surrounding timber.
Around 1888-1889 a second building was constructed and it became an inn serving the diggers who passed by on their way to the state's eastern goldfields. By 1910 the land had been subdivided into 1,000 acre farm lots. Mangowine, now a complex of buildings including the homestead, the inn and an underground cellar for prisoners, was opened to the public in 1973. It is regarded as one of the finest example of early wheatbelt architecture - a beautifully preserved homestead which captures the hardship of life in the 1870s. For more information check out https://www.nationaltrust.org.au/places/mangowine-homestead or tel: (08) 9046 5149.

Eaglestone Rock
Located 20 km north-east of the town via Lake Brown South Road, Eaglestone Rock is located near Lake Brown (a salt lake) and is a natural granite formation with an impressive cave. It is easy to explore and the surrounding area has wildflower displays in spring and wedgetail eagles can often be sighted. For more information, and some impressive photos, check out https://www.nungarin.com.au/eaglestone-rock.html.

Danberrin Rock
Located 18 km south-west of the town via Danberrin Road, Danberrin Rock offers an attractive and shady picnic area and a granite rock which, once climbed, provides superb views across the surrounding countryside. There is also a gnamma hole (a hole which is filled with rainwater) which was cut in the north-east corner of the rock by the local indigenous people. Check out https://www.nungarin.com.au/danberrin-rock.html for more details.

Talgomine Reserve
Located 18 km south of Nungarin via Cornish Road, Talgomine Reserve is a pleasant reserve with a walking track to a viewing point and good picnic facilities. The Nungarin website (see https://www.nungarin.com.au/talgomine-rock.html) explains: "Talgomine reserve is much more than a rock and reserve, the location served as a stopping place for travellers and stock passing through the area. The reserve became an important watering place for early settlers which is evident through the dam at the foot of the rock as well as two stone wells.  The granite rock itself was originally named 'Mount Moore' in honour of George Moore who accompanied Surveyor John Septimus Roe." The reserve is particularly attractive in spring when it is ablaze with wildflowers. There are York Gum and Jam Tree woodlands where orchids can be sighted.

Lake Campion Reserve
Located 4 km to the east of Nungarin is Lake Campion, a 610 ha reserve which is suitable for picnics and barbecues. When it has rained there is good water in the lake which can be a home for birdlife. At other times it becomes an impressive salt lake. It is listed by WA State Heritage which notes: "Lake Campion is part of a chain of intermittent lakes including nearby Lake Brown which occupy over 11,500 hectares and dominate the northern region of the Shire of Nungarin ... During periods of heavy seasonal rains, the lake system fills up, and Lake Campion becomes the centre for a brief flurry of sailing and water ski-ing. During the 1960s, the Lake Campion Aquatic Club was formed, but there are few occasions when sufficient water is available for such pursuits. Lake Campion was able to fulfil a strategic wartime need for supplies of potash fertiliser."

How to See Wildflowers Around Nungarin
Nungarin is a model of how to see wildflowers. They have a special brochure which can be downloaded at https://www.nungarin.com.au/uploads/5/6/1/5/56151793/nungarin_wildflower_brochure_the_final.pdf. There is also a very useful downloadable map at https://www.nungarin.wa.gov.au/Profiles/nungarin/Assets/ClientData/Documents/maps/wildflower_map.pdf. The most popular locations around town are Danberrin Rock, Eaglestone Rock, Talgomine Reserve and Lake Campion Reserve
When planning a trip there are a number of very simple rules.
(1) Start by downloading Your Holiday Guide to Western Australia’s Wildflowers at http://www.westernaustralia.com/en/things_to_do/forest_and_flowers/pages/wawildflowers.aspx#/. It is a comprehensive guide to the wildflowers. There are over 12,000 species and 60% of them are found nowhere else on the planet.
(2) There is a tendency to say "But I won't know what I'm looking at" but that is rubbish. There are a number of great books and the best, by far, is the answer to "Wildflowers for Dummies" titled Colour Guide to Spring Wildflowers of Western Australia. It is privately published by Wajon Publishing Company, written by Eddie Wajon, and comes in three volumes – 1. Kalbarri and the Goldfields, 2. Perth and the Southwest and 3. Esperance and the Wheatbelt. They can all be purchased online from Kings Park & Botanic Garden in Perth. Check out https://www.aspectsofkingspark.com.au.
The publication's design masterstroke is that the flowers are listed according to their colours and all the pages are colour coded. Thus Mr and Mrs Wildflower Illiterate, when gazing at a Spiny Synaphea, only need to open at the "yellow flowers" section and flick through until they find the colour photo which matches the reality. The company can be contacted directly on (08) 9310 2936.
(3) No one should ever underestimate the power of local knowledge and assistance. The Western Australian wheatbelt, probably because of the declining prices for both wool and wheat and the increased levels of salinity, has decided that the spring wildflowers are a good for the local economy and worthy of patronage.
(4) There is a logical route which can be honed or expanded according to the amount of time you want to spend.
The best starting place, if you want to get a good foretaste of what you are about to experience in the wild, is to visit Kings Park & Botanic Garden in the heart of Perth. Apart from offering sensational views over the Swan River and the Perth CBD the gardens boast a 17 hectare area which has more than 1700 native species of wildflowers. This is, not surprisingly, rather pristine and not very wild but it does allow you to develop a working knowledge of devils pins, kangaroo paws, desert peas, everlastings, starflowers, grevilleas, firebush, a range of orchids and hundreds of other natives.
You really don't need to be a flora expert. All you need are your eyes and a sense of wonder because the Western Australian wildflowers in spring really are as remarkable and significant as a unique part of Australia as Uluru, the Great Ocean Road or Cradle Mountain.

* Prior to European settlement the area around Nungarin was inhabited by the Nyaki-Nyaki Noongar Aboriginal language group.

* The first European into the Nungarin area was Surveyor General J. S. Roe who passed through in October 1836.

* On 25 October Roe found a spring, probably the Mangowine Spring, which years later, in 1869, was to be the focus of the first settlement in the area.

* An expedition in 1865 passed through the area and marked 'Noongarin Rock' on the map of Western Australia.

* Mangowine Homestead was built by Charles and Jane Adams in the early 1870s.

* Around 1888 the homestead became an inn serving the many diggers who passed through on their way to the goldfields.

* In 1909 a new wave of farmers began to arrive in Nungarin. The large leasehold properties were subdivided into wheat farms and the timber was cleared from the land.

* When the Kunnoppin to Merredin railway extension was planned in 1910, a siding at Nungarin was proposed. A townsite reserve was established.

*The railway reached Nungarin on 28 August 1911 as part of the government's commitment to opening up the wheatbelt.

* In 1912  the town was gazetted and a general store and boarding house were built.

* By 1913 a school was constructed and agricultural machinery salesmen and contractors arrived to service the needs of the farming community.

* The first West Australian branch of the Country Women's Association (CWA) was set up in Nungarin in 1924.

* In 1942 Nungarin saw an Army Base Ordinance Depot built to service World War II supplies. Around this time up to 12,000 troops were stationed in the town.

There is an official local website. Check out https://www.nungarin.com.au. 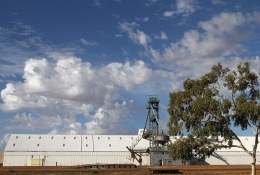 A road lined with eucalypts on the way to Nungarin 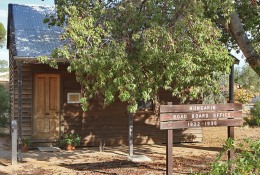 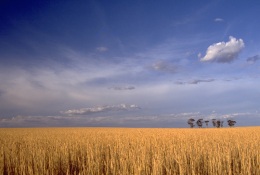 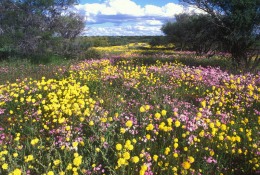 There are areas around town that are ablaze with wildflowers