The business and commercial heart of the Barossa Valley

The historic town of Nuriootpa is recognised as the business and commercial heart of the Barossa Valley. It is the tourist and service centre for a famous grape and wine area which has over 150 wineries and cellar doors. It is a town surrounded by vineyards.

Nurioopa is located 270 metres above sea level and 82 km north-east of Adelaide via Gawler.

There is some dispute about the derivation of Nuriootpa. One school of thought believes that it is a Kaurna Aboriginal word meaning "meeting place" and another insists that it probably derives from "nguraitpa" meaning "neck country".

2. Barossa Bushgardens and Bush Chapel
Located at 653 Research Road, the Barossa Bushgardens were created in 2001 to promote and conserve plants which are native to the Barossa region. The website (https://barossabushgardens.com.au) explains: "At this time, the seven hectare site was a grazing paddock in poor condition, with only one 400 year old River Red Gum (Eucalyptus camaldulensis) that was in very bad shape. Volunteers began planting with understory species around the Old Gum Tree. These plants now provide a seed source to supply stock for the BBG Nursery. Tube stock grown on site supply plants for home gardens, shelter belts, bush, native grassland restoration, orchards, vineyards and other productive agriculture enterprises. Today, the gardens are home to about 130 of the 400+ species of plants that can be found in the region, some of which are rare or critically endangered. It showcases different plant associations, as well as garden beds filled with a diversity of vegetation." There is a map available to download at https://www.barossa.sa.gov.au/Media/Default/Community%20and%20Cultural%20Services/Libraries/Barossa%20Heritage%20Trail/Barossa%20Bushgardens%20Self-Guided%20Tour%20Maps%20Nuriootpa.pdf.

3. Centennial Park and the Kaesler Caravan
Located out the front of Coulthard House, and now encased to protect it from the elements, is a caravan built in 1931 and made, in part, from such unusual materials as pressed metal. The signage explains: "This 'House on Wheels' was designed and built in 1931 by G C Kaesler of Nuriootpa SA to accommodate himself, wife and three children during a tour of South Australia and the Eastern States. The tour took them to Brisbane via Broken Hill, Bourke, Cunnamulla (before roads were built or signs erected in this section of Australia's outback), returning through Sydney, Canberra, Melbourne and Mt Gambier. To assist with driving in the outback the vehicle was equipped with Compass, Gradometer, Altitude Barometer, Gasometer and Thermometer. The home comforts included Wireless, Electric Lights and Fan, Gas Stove, collapsible Table and Beds, Toilet facilities, two Water Tanks of 12 gallons (55 litres each), also Spotlight and Rifle with telescopic sight." It was, reputedly, the second caravan built in Australia.

4. Coulthard House
Located on the corner of Murray Street and Penrice Road this beautiful building was constructed by William Coulthard who started the construction in 1855. It is built of local bluestone. Coulthard arrived in South Australia in 1836 and died in 1858 while searching for good grazing land. The house remained within the family until 1958 when it was purchased by the local community for £7000.

5. Nuriootpa High School
Located at 1 Penrice Road, the main high school building was completed in 1937. The school was built on land which was purchased from William Coulthard who also donated sandstone for the building’s façade. Note the War Memorial Wall which honours former students who were killed during World War II.

6. Band Hall
Located on the corner of Old Kapunda Road and Murray Street, the Nuriootpa Town Band Hall is an unusual nine-sided building which was constructed in 1980 to mark 100 years of the town band which was established in 1880.

7. Coulthard Uniting Church
Located at 56 Murray Street, this attractive church was built in 1936 with money from the Coulthard family - Mr H and Misses A & H Coulthard. It honours the district’s pioneers. Originally a Methodist church known as the Coulthard Memorial Methodist Church, it subsequently became the town's Uniting Church.

8. Schaedel House
Located in Murray Street this distinctive house has an unusual history. The plaque outside explains: "Carl Wilhelm Schaedel, a German 'tischlermeister' or 'master cabinetmaker', built this unusual home with a unique lower level workshop in about 1875. Three generations of the Schaedel family worked on this site from the mid-1850s. Since Wilhelm's death in 1913, the house has had numerous owners. in the 1950s and 1960s the basement was used as a cafe. The property is now owned by St Petri Lutheran Church." There is an amusing local legend which claims that on hot days, Wilhelm’s wife would use a coffin as a cool resting place. There is a detailed history at https://www.barossamag.com/local-advice/the-tischlermeister-of-nuriootpa. It notes: "Wilhelm produced a variety of Baltic pine and Australian red cedar furniture from the 1850’s to the 1890’s including wardrobes, kitchen cupboards, chests of drawers, tables and chairs."

9. St Petri Lutheran Church
Located at 21 Second Street, the present church was built in 1968 to celebrate the centenary of the congregation. The first Lutheran services were conducted in the Barossa Valley as early as 1849 by a clergyman named Christian Heinrich Roennfeldt at Poplar Holme between Nuriootpa and Greenock. A church was built in 1867. It was only 47 feet by 22 feet. It was enlarged in 1923 and a tower and bell were added in 1927. A second church was built, due to an expanding congregation, in 1968. That same year a $10,000 pipe organ was installed. For more information check out https://stpetri.org.au/about/history.

12. Nuriootpa War Memorial Swimming Pool
Located off Memorial Avenue, opposite Nuriootpa Linear Park, the Nuriootpa War Memorial swimming pool was opened in 1945. It was built by tradesmen who were assisted by volunteer labour. It was designed to Olympic pool standards and, although only £1,500 was allocated for construction, the rest of the cost was made up by generous contributions of labour and material. Check out https://trove.nla.gov.au/newspaper/article/55862467 for more information.

13. RSL Hall
Located at 7 Memorial Avenue, the RSL Hall was built in 1952 by volunteer labour. There is an Australian Conflict Memorial and a Past RSL Members Memorial Rose Garden out the front.

14. Linke’s Bakery
Located in Murray Street and with a facade with looks decidedly Germanic, this bakery opened in 1938 and was family run in its early years with bread being originally delivered by horse and cart. It is a charming, historic addition to the main street.

17. Angas Park Hotel
The Angas Park Hotel located at 28 Murray Street was opened in 1856. It was originally known as “Hotel Sebastobol ” and was first licensed by an early settler known as Edward Alexander Schulse. Today the façade and bar date from the original building.

19. Vine Inn Community Hotel
The Vine Inn, located at 14-22 Murray Street, on the site of William Coulthard’s original two room, gum slab hut, was built in 1843. It was purchased by the town in 1937. The hotel is managed by a board and, as a community owned business, all hotel profits are returned to the region through sponsorship and donations to local sporting and service clubs, schools, kindergartens and community projects.

Wineries in the Area
Nuriootpa Wine Trail
In areas like the Nuriootpa district, where there are a number of cellar doors, it is best to refer to the specific knowledge of the wine experts. The Barossa Australia website, an excellent site (check out https://www.barossa.com/uploads/62/nuriootpa-wine-trail-map-updated-april-2016-.pdf) has extensive, downloadable information about the wineries in the region - titled Nuriootpa Wine Trail. It provides hot links to seven winery websites. There is also a useful Iconic Winery Trail with recommendations and information which can be accessed at http://www.daytrippa.com.au/barossa-valley/full-guide/daytrip/4073. Also check https://www.barossa.com/wine which has a search engine where visitors can be directed to the 150 wineries in the area.

Luhrs Pioneer German Cottage and Lights Pass
Located 3 km from Nuriootpa via Penrice Road, Light Pass (named after Colonel Light) is noted for its two Lutheran churches (Strait Gate and Immanuel) and Luhrs Pioneer German Cottage.
In 1848 Johann Heinrich Luhrs, who was a local teacher, built the cottage out of stone and mud. It fell into disrepair but was restored in 1978 with the stone being re-pointed, the roof repaired and old red bricks laid on the bare dirt floors. New veranda posts were made. It was placed on the State Heritage list in 1990. The cottage has three rooms which have been filled with collectables and memorabilia which evoke a typical German settler's dwelling. The cottage is open most days (admission by donation) from 9.00 am - 4.00 pm. Tel: (08) 8562 2978 or check out http://community.history.sa.gov.au/luhrs-cottage-preservation-society.

* Prior to the arrival of Europeans the area was inhabited by the Kaurna, Peramangk and Ngadjuri Aboriginal people.

* In 1839 Colonel Light, the Surveyor General of South Australia, sold off large tracts of land in the Barossa Valley. The area around Nuriootpa was sold to George Angas.

* The town grew rapidly in the 1840s with the discovery of copper at Kapunda. It became an important stopover point for miners and bullock drivers on their way from Adelaide.

* The town grew around the Red Lion.

* By 1855 Coulthard was so successful that he had built himself a bluestone mansion, Coulthard House.

* The Angas Park Hotel, known as the Hotel Sebastapol, opened in 1856.

* By the 1890s there were dozens of wineries in the valley including Seppeltsfield, Orlando, Yalumba, Saltram and Hensche.

* In 1956 Colin Gramp launched Orlando Barossa Pearl - a wine for the masses.

* Today Nuriootpa lies at the heart of the Barossa Valley grape growing region.

There is an official local website. Check out https://www.barossa.com/nuriootpa. 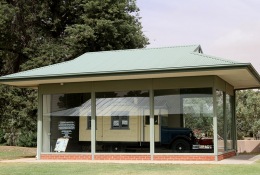 The ‘House on Wheels’ caravan dating from 1931. 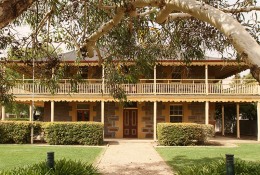 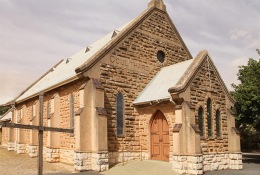 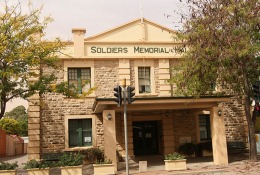 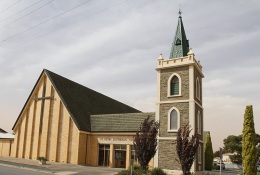 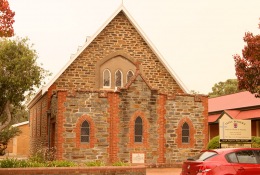 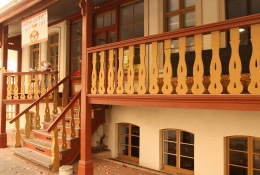 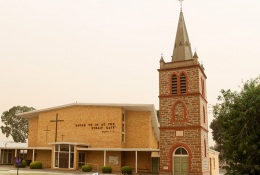 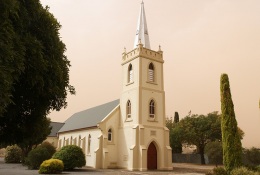 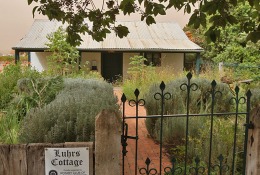 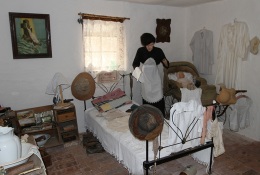 The interior of Luhrs Cottage