Holiday town on the ocean side of the Bellarine Peninsula

Ocean Grove lies on the eastern bank at the mouth of the Barwon River. Across the river is its twin town, Barwon Heads. The river connects Lake Connewarre to Bass Strait. The twin towns, connected by a new bridge, are hugely popular holiday destinations because they have the closest ocean beaches to Geelong. Ocean Grove is the largest settlement on the Bellarine Peninsula. Inevitably the main appeal of the area lies in the holiday activities which have been created including the Adventure Park.

In 1882 two Wesleyan missionaries from the USA bought the land on which the town now stands. They had been involved in a Methodist settlement at Ocean Grove in New Jersey in the 1870s and they sought to recreate the "coastal camp" venture here. It failed to get going although the name has remained.

Ocean Grove Beach
Ocean Grove Beach is the town's 2 km-long ocean beach (it is a section of the long arc of beach which stretches from Point Lonsdale to the mouth of the Barwon River) which is very popular for swimming, surfing and fishing. The Ocean Grove Surf Lifesaving Club is located off Surf Beach Road. There are a number of walking tracks which lead off Surf Beach Road, Orton Street and the Ocean Throughway - often with steps leading down the steep dunes to the beach. For detailed information check https://beachsafe.org.au/beach/vic/greater-geelong/ocean-grove/ocean-grove.

Buckley Park Foreshore Reserve
Buckley Park is a foreshore reserve which stretches from Ocean Grove to Point Lonsdale. The City of Geelong website (see https://www.geelongaustralia.com.au/parks/item/buckleypark.aspx) describes the area as "The dunes and plants facing Bass Strait are shaped by the salt laden winds. Coastal Spinifex and Knobby Club Rush hold and stabilise the shifting sands. Further back among the more stable secondary dunes the succulent ‘Pigface’ or Karkallo attracts attention with bright pink flowers. These more protected areas are dominated by Moonah Woodland, with open patches of coastal grasslands. There are more than 90 shell middens within the reserve indicating a long Aboriginal history. Birdlife is prolific with Fairy Penguin, Short Tailed Shearwater, Australasian Gannet, and a variety of Gulls, Terns, Petrels, Oystercatchers and other sea birds. The tiny threatened Hooded Plover nests on the open beach from September-March. Hooded Plover are a nationally, critically endangered species and easily disturbed by people and dogs. Please take care during nesting times. Seals use this stretch of coast to rest and, once a year, to moult."

Ocean Grove Nature Reserve and Kingston Park
Located 5 km north of the town centre, the Ocean Grove Nature Reserve (143 ha) is the only remaining section of substantial native woodland on the Bellarine Peninsula. It has been estimated that it is home to 178 species of native plants. It supports she-oak, tea-tree, banksia and wattle and is home to a koala community and the ant blue butterfly which was only discovered in the twentieth century. The butterfly's larvae feed exclusively on ants. The reserve is located at the northern edge of town, on the western side of Grubb Road. There are two walking tracks - the Discovery Trail (Banksia Trail) is 3 km long and the Wallaby Trail is 1.5 km long) and two bird hides. There is a Bird Hide walk via the North Track which takes around 40 minutes. The gate closes at 5.00 pm. There is a detailed and informative Weekend Note at https://www.weekendnotes.com/ocean-grove-nature-reserve.
Located at 8-52 Adco Grove  (it is 3 km south-west of the town centre), Kingston Park has barbecues and toilets and a particularly impressive playground "accommodating imaginative and sensory experiences on the extensive community playground equipment." Check out https://www.geelongaustralia.com.au/parks/item/kingstonpark.aspx.

Ocean Grove Beach to River Loop Walk
There is a pleasant 2.8 km walk which starts at the car park on the Ocean Grove Surf Beach, heads along the beach, moves around the headland to the Barwon Heads bridge and along the river to the caravan park. It is described in great detail at https://walkingmaps.com.au/walk/1663 and is a pleasant way to experience the natural charm of Ocean Grove and the beach.

Lake Connewarre State Wildlife Reserve
Located 8 km north-west of Barwon Heads is the Lake Connewarre State Wildlife Reserve and Reedy Lake. It is an area of swamps, marshes, lakes and rivers which has a boat ramp; a pleasant picnic location at Taits Point; good opportunities to fish for bream, redfin, mulloway and yellow eyed mullet; and important migratory bird habitats which are havens for bitterns, swamp hens, ibis, spoonbills, egrets, cormorants and herons. It is also a " significant habitat for a number of endangered migratory bird species. Two international agreements with Japan and China ensure species such as Greenshank, Eastern Golden Plover and Red-knecked Stints are protected." There is a useful Park Note which can be downloaded (it has detailed maps) at https://www.barwoncoast.com.au/sites/default/files/park-note-lake-connewarre-state-game-reserve.pdf.

Adventure Park
Located 8 km north of Ocean Grove at 1249 Bellarine Highway, Wallington, Adventure Park is designed specifically for holiday makers with children who want to spend their leisure hours on rides including The Tornado, Crazy Coaster, Water Splashzones, Red Baron, Ferris Wheel, Aqua Racer and Lazy River. There are Water Rides, Family Rides and Kids Rides. Facilities include eight food and beverage outlets, VIP cabanas and pavilions. Opening hours are from 10.00 am to 5.00 pm.  Tel: (03) 5250 7200. and check https://www.adventurepark.com.au for prices and opening times.

Jirrahlinga Koala & Wildlife Sanctuary
The Jirrahlinga Koala and Wildlife Sanctuary was created in 1983 as a haven for animals injured in the Ash Wednesday bushfires of that year. Since then, as it clearly states, "It is primarily about people who have a disability, a special need, the frail or the aged. What better therapy could there be than to come into a supportive environment to work quietly with animals or just visit and touch a koala or joey that do not place demands on a person's physical or mental capacities." It is home to a range of native animals and is open to the general public. It is located at 177-200 Taits Road, Barwon Heads and is open daily from 10.00 am - 5.00 pm seven days a week. For more detailed information check out https://www.jirrahlinga.com.au or tel: (03) 5254 2484.

* Prior to the arrival of Europeans the area was home to Wathaurung Aboriginal people.

* The Barwon River was surveyed and named by John Helder Wedge in 1835.

* In 1853 the Earl of Charlemont was shipwrecked and some of the survivors settled in the area.

* European settlement of the area began at Ocean Grove in 1854 when William Bonsey took up a property. He used the wattle bark he found on the property to establish a leather-tanning industry.

* In 1882 the American Methodist church set up a camp named Ocean Grove. The church acquired 222 hectares of land and named over 30 streets after prominent Methodists.

* The Ocean Grove Wesleyan Church was opened in 1889. That year saw a Post Office open in the area.

* By 1893 it had become a popular tourist destination.

* An Anglican church was opened at Ocean Grove in 1896.

* Fishing became central to the local economy until, after World War II when Ocean Grove became an important a holiday resort.

* In the 1950s migrant families from Holland, Poland, Germany and Yugoslavia settled in the area.

* A Catholic church was consecrated in 1954.

* In 1959 some scenes from On the Beach were shot on the local beaches.

* Since the 1960s both Barwon Heads and Ocean Grove have effectively become outer suburbs of Geelong.

* By 1970 the town was so popular it was experiencing a major building boom.

* In 2009 the historic Barwon Bridge was demolished. 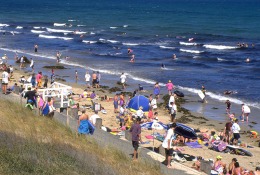 The beach at Ocean Grove 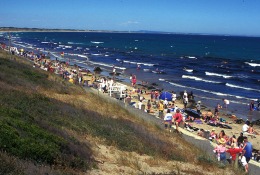 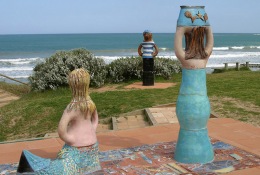 The Mermaids and Sailor sculptures beside Ocean Grove beach 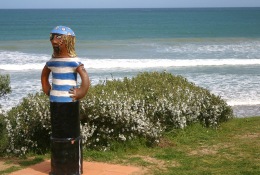 The Pirate bollard on the Ocean Grove foreshore