Ghost town with a single pub north of Kalgoorlie

If it wasn't for the Ora Banda Historical Inn the town of Ora Banda (which once had a population of over 2,000 people) would be a desert ghost town. Instead the pub does good business and there are plans to open a museum. If you arrive during a time when the price of gold is high you will find mining activity in the surrounding area. Gold miners never give up.

Ora Banda is located 661 km east of Perth via the National Highway and Kalgoorlie and 67 km north-west of Kalgoorlie via the Goldfields Highway.

In 1893 the Weston brothers established a goldmine in the area which they called Ora Banda, the Spanish for 'band of gold' or 'sash of gold'.

Remnants of the Town
Many of the town's buildings were constructed of timber and consequently they have either rotted away or been removed. The only intact buildings are the Ora Banda Historical Inn and the Government Battery which is scheduled to be turned into a museum. In the area there are still some old ruins and a few isolated homesteads. When the price of gold reaches a certain level a wave of new mining operations arrive in town to exploit the remnants of the once-rich goldfield.

Ora Banda Historical Inn
Originally known simply as the Ora Banda Historical Inn this remarkable old stone and brick building characterised by brick quoins and a double-hipped corrugated roof was constructed in 1911 by Alfred Garnett who believed the gold in the area would ensure a profitable business. It continued to operate for over forty years but the town declined and it was closed in 1958. Between 1958 and 1981 it was vandalised but it was reopened and revitalised in 1981. It closed in 2000 but reopened in 2002 and currently is the main drawcard to the town with people driving 67 km from Kalgoorlie for a pub lunch and few beers. It is the centre of activities on the Ora Banda Race Carnival day and the owners have plans to turn the old Gold Battery into a museum.

* Prior to the arrival of Europeans the area was inhabited by members of the Wangkathaa Aboriginal language group.

* Gold was discovered in the Ora Banda district in 1893 at a time when prospectors were racing through the entire area. Originally the area was known simply as '45 Mile' or 'Cashmans' which honoured two early prospectors, Cashman and Lee, who found 1,000 ounces of gold in a few months in the area.

* In 1895 the Weston brothers, who had been tea planters in Ceylon, established the Ora Banda mine after which the town is named.

* By 1910 there were over 2,000 miners in the area which resulted in the construction of a town hall, a post office, a police station, stores, butchers shops and boarding houses. Many of the buildings were brought from a settlement called Paddington which lay 40 km to the east but which was dying.

* Town lots were surveyed in 1911. During the year the stone and brick Ora Banda Inn was opened for business.

* The Ora Banda mine was forced to stop operations during World War I because of the lack of water.

* In 1933 the town was connected to the Goldfields Water Supply Scheme which was extended north from Kalgoorlie.

* The Ora Banda mine continued to operate until the late 1970s.

* In 2000 the town was the subject of a bitter bikie feud which resulted in a member of the Gypsy Jokers, Billy Grierson, being shot and the Ora Banda hotel owner, Don Hancock, being killed in a car bombing the following year.

The hotel website - http://www.orabanda.com.au/cms/ - has information about the hotel, motel units and caravan park as well as a menu and details of the planned changes to the town. 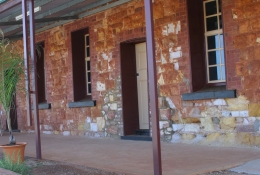 The Ora Banda Historic Hotel (1911) has currently been revitalised. 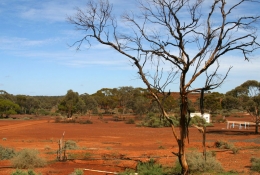 The harsh countryside around Ora Banda. 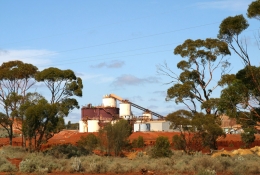 Whenever the price of gold rises miners move back into the area.