Orpheus Island is located 20 km east of Ingham and 80 km north-east of Townsville. It is a small island only 11 km long and, on average, about 1 km wide. Most of the island is administered by the Queensland National Parks and Wildlife Service with only exceptions being the small but exclusive Orpheus Island Lodge at Hazard Bay and the James Cook University Marine Research Station in Pioneer Bay. The island, which is volcanic in origin, covers an area of 1300 hectares. In 1960 it was declared a national park. It is surrounded by reefs and the vegetation and wildlife are of considerable scientific interest. Although small the island has natural vegetation ranging from grasslands through to tropical rainforest. The wildlife includes a number of varieties of snake as well as echidnas, orange-footed scrubfowl, yellow-bellied sunbirds, friar birds, ospreys, kites, reef herons and egrets. The island has been host to a variety of celebrities including Elton John, Chris Hemsworth, Phil Collins, Vivien Leigh and Mickey Rooney.

Orpheus Island is located 20 km east of Ingham and Lucinda and 80 km north of Townsville.

The island was named by Lieutenant G. E. Richards in 1887 after the HMS Orpheus, a British naval vessel wrecked off the coast of New Zealand in 1863.

Vital Information About the Island
Location
Orpheus Island is located 45 km east of Ingham, 110 km north-east of Townsville and 190 km south of Cairns.

Description of the island
It is a small island only 12 km long and, on average, about 1 km wide. At its widest point it is 2.5 km. The island, which is volcanic in origin, covers an area of 1300 hectares. There are a number of pleasant walks. The eastern side of the island is quite steep and craggy. It is a continental island and is fringed by coral reefs. The National Parks website notes: "The island is composed of volcanic rocks that formed around 280 million years ago. Molten rock intruded into cracks in the granite bedrock, forming distinctive ring dykes. A spider web pattern of dykes is seen on the headlands and rocky shores. Dry woodlands of Moreton Bay ash and acacias (wattles) dominate the island. Scattered rainforest grows in gullies and sheltered bays, featuring figs and macaranga trees with their large distinctive heart-shaped leaves. Grasslands also occur in small irregular bands across the island. Several mammals and reptiles are found on the island. Many species of birds can also be seen, including terrestrial birds such as the orange-footed scrubfowl, and seabirds such as ospreys and egrets."

How do visitors access it?
There is only one way to get to the Orpheus Island Lodge. There is a 30 minute helicopter journey from Townsville with Nautilus Aviation. Check https://www.orpheus.com.au/getting-there/ for details and costs. Other access is via private chartering of boats.

Activities on the island
Visiting the James Cook University Research Station, bushwalking, swimming, birdwatching, snorkelling, guided eco tours. For information about picnics, day use, boating fishing and camping which is not connected to the Orpheus Island Lodge check out the Orpheus Island National Park website at https://www.npsr.qld.gov.au/parks/orpheus-island/about.html. It is possible to book a campsite on the island.

James Cook University Orpheus Island Research Station
Catering for up to 60 people the James Cook University Research Station is located at Pioneer Bay and offers groups opportunities for bushwalking and, as the website explains, "The marine environment surrounding Orpheus is made up of diverse marine and estuarine habitats, ranging from mud and sand flats to coral reefs. Diverse habitats and productive continental shelf waters have made the Palm Islands a hot spot of biotic diversity on the Great Barrier Reef. Species numbers in such indicator groups as corals and amphipods, for example, are unusually high. For this reason many researchers visit Orpheus Island to study its diverse corals and sponges. The waters around the island are a mecca for fish and invertebrate biologists, as well as marine ecologists. Pioneer Bay's 400 metre wide sand and rubble intertidal reef flat, directly in front of the Station, supports a diverse fauna. Mangrove forests provide nurseries for fish, black-tip sharks and stingrays which are abundant in the shallows ... and "At 11 km long and roughly 1 km wide, the completely vehicle-free island offers an unspoilt encounter with iconic Australian eucalypt forests, beautiful bushwalks and scenic lookouts. The island itself is home to a diversity of plant and animal life. Echidnas, bandicoots, green leaf building ants, and various reptiles are just some of the terrestrial wildlife found on the island and around the Research Station. At low tide, sit on the verandah at Havana House and look out into the bay. You’ll see thousands of giant clams shooting water into the air." Check out https://www.jcu.edu.au/orpheus-island/discover for more details or tel: (07) 4777 7336. It is possible to book a tour of the research station if you are staying at the Orpheus Island Lodge.

Orpheus Island Resort
Run by the Morris Family, the Orpheus Island Resort is committed to eco tourism and thus prides itself on eradicating harmful fauna and flora from the island, using chickens on the island for eggs in meals, using solar hot water and a water treatment plant, having a vegetable garden for fresh vegetables, using extensive recycling and caring for the environment.

History
Orpheus Island Lodge is both exclusive and very private. Owned by the Morris Family, it is one of the few remaining privately owned island resorts.

How big is it?
The lodge has accommodation for 28 people. It has 14 rooms, suites and villas.

Who does it appeal to?
People who love seclusion, peace and quiet - honeymooners, diving enthusiasts.

Other activities
It is possible to book additional snorkelling, scuba diving, game fishing, ocean cruises and helicopter charters as well as visits to Hinchinbrook Island, Pelorus Island and a chef prepared picnic adventure. There is also a guided eco-educational dive and snorkel charter.

Eating at the resort
All accommodation at the Lodge includes three gourmet meals daily. The main lodge has a bar and al fresco dining area.

* Prior to the arrival of Europeans the island was known to be inhabited by local Aborigines, probably the Nyawagi people.

* The island was named by Lieutenant G. E. Richards in 1887 after the Orpheus, a British naval vessel wrecked off the coast of New Zealand in 1863.

* In 1927 the area around Orpheus Island, notably Palm Island, was used as a dumping ground for Aborigines. Fantome Island became a leper colony.

* In the 1930s the island started attracting tourists.

* During World War II Yanks jetty was established on the island

* A beach guest house was established in the 1940s

* In 2002 the island was purchased by Jim Wilson who had developed the Freycinet Lodge in Tasmania.

* In 2011 the island was taken over by Chris Morris who made his fortune with Computershare. It is believed he paid less than $10 million for the resort.

* In recent times solar hot water has been established.

* The island is currently owned and managed by the Morris family who own the Northern Escape Collection.

All meals on the island are included in the daily rates. Check https://www.orpheus.com.au/accommodation.

The Orpheus Island Lodge website has all relevant details. Check out https://www.orpheus.com.au. 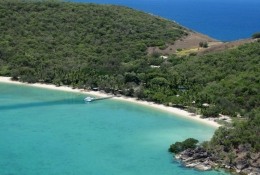 Aerial view of the Orpheus Island Lodge and jetty 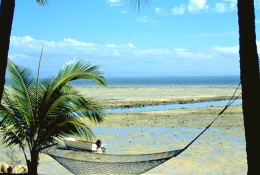 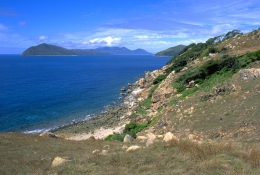 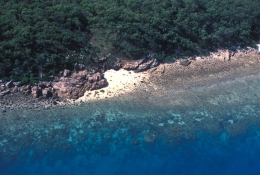 The eastern coastline of Orpheus Island from the air