Ouyen (pronounced "Oh-Yen") is located at the intersection of the Mallee Highway and the Calder Highway 442 km north-west of Melbourne, 101 km south of Mildura and 50 m above sea-level.

It is believed that "ouyen" is a corruption of a Wergaia Aboriginal word  "wuya-wuya" probably meaning "pink-eared duck" or "ghost waterhole".

Ouyen District History and Genealogy Centre
The Ouyen District History and Genealogy Centre is located in the Old Court House at 77 Oke Street. Established in 1984 this is a photographic collection with 2,500 black and white photographs as well as microfilm of the early Ouyen newspapers from 1911, including some early copies from Underbool and Murrayville; oral history recordings; maps; books; district records and ephemera are also included. It is open Friday from 9.30 am - 4.00 pm or by appointment, tel: (03) 5092 1763.

The Famous Great Australian Vanilla Slice Triumph
For 14 years Ouyen achieved fame as the host of a dubious contest known as the Great Australian Vanilla Slice Triumph. It was created in 1998 when the Premier of Victoria, Jeff Kennett, announced it unexpectedly on radio. Kennett argued that he was a lover of the Vanilla Slice and the Mallee Bakery in Ouyen made superb versions of this uniquely Australia sweet taste thrill. [They still do] Over the years 30,000 visitors flocked to the town to gorge on the cake. Such arcane culinary skills as pastry lamination and icing shine were judged. The competition was split into sections, allowing professionals, amateurs and students to all get involved. Organisers estimate that around 2,000 entrants have joined the event since it started and that it brought around $3.5 million to the town. It was moved to Merbein near Mildura in 2012.

Murray Sunset National Park
Lying to the north-west of Ouyen is the Murray-Sunset National Park. Victoria's largest national park (it covers 677,000 ha), it was proclaimed in 1991 to protect local fauna which had been severely affected by the clearing of nearly 65% of the mallee scrub. Today it protects 183 species of threatened plants and animals and offers vast, open spaces which come alive with wildflowers in spring. The park is home to more than seventy significant plant species including Victoria's largest flower, the Murray Lily, the restricted Silvery Emu-bush and the Blue-leafed Mallee. Grasslands, saltbush, buloke, porcupine grass and mallee eucalypts dominate the flat, expansive landscape with pockets of native cypress-pine and Belah woodlands scattered throughout. Murray-Sunset National Park is one of the few regions in Victoria where red kangaroos can be seen. The park is home to a number of threatened species - they include the Paucident Planigale, a small carnivorous marsupial, the slender yellow and green Regent Parrot, and the Millewa Skink. Other notable birdlife include Mallee Fowl, Pink Cockatoos and White-browed Tree creepers. On a warm afternoon Bearded and Mallee Dragons may also be seen. All plants, animals, archaeological and historic sites are protected. The park is arid and fairly inaccessible. However, some 4WD tracks enter the park from the Ouyen area. The most popular entry point (which is accessible by 2WD) is the road from Linga (60 km west of Ouyen) which leads to the remarkable, unusual and beautiful Pink Lakes (12 km north of the turnoff at Linga). The colouration of these saline lakes is particularly clear on overcast days. It is caused by carotene from a type of algae. In winter the lake accumulates saline run-off and fills up with water from subterranean springs while, in summer, the water evaporates to leave a pinkish salt crust. The lakes are conjoined by a ring road and each can be circled on foot. Salt-tolerant vegetation such as nitrebush and salt paperback predominates around the lake. Further west is the Panitya North Road (30 km northwest of Murrayville) which passes through the Bellbird and Boltons Bore area where you will find "The Rockholes", dug out of solid rock by the Aboriginal people, in order to collect water. Just to the north of this point, Pheenys Track heads eastwards to Rocket Lake Campground which can be accessed from the Calder Highway north of Ouyen. Another departure point from the Mallee Highway is the Underbool Track which commences just east of Cowangie. These entry points intersect with other 4WD tracks which enable a thorough exploration of the park. The park's pastoral past is evident in the fences and stockyards of Birthday and Sunset Plains where emus and kangaroos graze, and at the old shearers' quarters which offer basic accommodation in the north-west corner of the park. There are a number of maps of the park including http://www.wimmeramalleetourism.com.au/images/MalleeDrive4WDAdventure.pdf (the Mallee Drive map) and the downloadable brochure - http://parkweb.vic.gov.au/__data/assets/pdf_file/0009/315684/Park-note-Murray-Sunset-National-Park.pdf.

Hattah-Kulkyne National Park
The Hattah-Kulkyne National Park is based around the Hattah Lakes system which is filled by Chalka Creek, an anabranch of the Murray River. The primary appeal of the park is the number of excellent bushwalking trails and the Hattah Nature Drive which is located close to Lake Hattah. There are also opportunities for canoeing and birdwatching with the lakes being a significant wetlands and home to pelicans, ducks, spoonbills, mallee fowl and emu wrens. There is an information centre at Hattah Lake (it provides information but it is also possible to download the Visitor Guide to the park at http://parkweb.vic.gov.au/__data/assets/pdf_file/0016/313801/Park-note-Hattah-Kulkyne-NP-and-Murray-Kulkyne-NP.pdf. The park is known for its Aboriginal middens, canoe trees and shield trees are evidence of Aboriginal occupation. There are kangaroos, goannas and over 200 species of birds, where, apart from the birds around the lakes, there are also emus, mallee fowl, miners and white-winged choughs away from the lakes. River red gums are plentiful around the waterways while black box woodlands predominate on drier land. Cypress pine and buloke inhabit the sandy plains while mallee eucalypts flourish on the higher sandy ridges. Access is via the township of Hattah on the Calder Highway, 34 km north of Ouyen. From Hattah, head east on the Hattah-Robinvale Rd. After 4 km there is a signposted left turn onto the 2WD gravel track which leads to the Lake Hattah with its campground and information centre. The Hattah Nature Walk starts from the roadside (clearly marked) about 200 metres inside the park (notify a ranger if you intend a longer hike as temperatures in the park can be extreme and be sure you have a map and compass). There is also the self-guided Hattah Nature Drive on the eastern edge of  Lake Hattah and along the shore of Lake Bulla.

Wyperfeld National Park
Wyperfeld National Park, which currently covers 357,017 ha, is one of Victoria's largest national parks. It covers three distinct landscapes - the Big Desert country which lies in the west of the park; the Mallee which lies to the east; and the sand dunes and floodplains which lie to the north. Historically it was a shallow sea 25 million years ago. The park contains a series of lakes which are linked by Outlet Creek, though they are usually dry, filling only when the Wimmera River floods, which is about once every twenty years. It fills Lake Albacutya which overflows into Outlet Creek. European settlers moved into the area in 1847. The first reserve was established in 1909 and as a result of lobbying by naturalists the park was declared in 1921. The park is known for its fauna and flora. It is home to kangaroos, emus and birds which survive in the semi-arid landscapes of sand dunes and spinifex, mallee scrub, heathlands and native pine woodlands of river red gum and blackbox. To access the park from Ouyen, head west to Underbool. Those entering the park in 4WD vehicles can gain access to Milmed Rock, Chinamans Well and North Callitris Track. There is also the acclaimed Mallee Drive - check out http://www.fwdvictoria.org.au/iconic4wd/mallee.html which has a downloadable map, track notes and information about the track conditions. The Mallee Drive from Hopetoun to Underbool is 126 km.

Eastern Lookout Nature Tour
There is a detailed, downloadable brochure - check out http://parkweb.vic.gov.au/__data/assets/pdf_file/0007/315826/Park-note-Wyperfeld-NP-Eastern-Lookout-Nature-Walk.pdf - which provides detailed information on the 15-km Eastern Lookout Nature Drive which is suitable for a 2WD. It includes details on the 25 minute return Eastern Lookout Walk which offers views over stands of Black Box, Red Gum, Native cypress-pine woodland and Mallee woodland. The walk also passes through country occupied by Wedge-tailed eagles, black-shouldered kites and nankeen kestrels. The rest of the drive includes lines of Red River Gums; Lake Brimin which has not held water since 1921; stands of Porcupine Grass and Mallee eucalypts; and, inevitably, kangaroos and emus. It is an ideal opportunity for those interested in fauna and flora to study the uniqueness of the Mallee. The brochure explains the special importance of the plants and animals. For further information there is a useful and downloadable brochure. Check out http://parkweb.vic.gov.au/__data/assets/pdf_file/0006/315825/Park-note-Wyperfeld-National-Park.pdf. Wyperfeld National Park is accessible from Underbool, a small town 50 km west of Ouyen on the Mallee Highway. Underbool-Patchewollock Road heads south from Underbool to Pine Plains, a section of freehold land taken up in 1847. This area of the desert is ideal for bushwalkers, 4WD exploration, an enormous sandhill called The Snowdrift and O'Sullivan Lookout. There is also accommodation at Pine Plains Lodge. Check out http://www.pineplainslodge.com. Alternatively, if you head west towards Patchewollock, a road heads 3 km south to Casuarina Campground, a secluded and sheltered campsite. Those with a 4WD can also make their way south to Wonga, the park's main campground. Kangaroos, emus and birds inhabit the semi-arid landscapes of sand dunes and spinifex, mallee scrub, heathlands and native pine woodlands. For further information ring (03) 5395 7221 or 131 963.

* Prior to the arrival of Europeans is thought the area is occupied by the Wergaia Aborigines.

* In 1903 the railway line was extended from Woomelang to Mildura.

* The town developed around a railway station which was established in 1906 after the Melbourne to Mildura line passed through the area.

* In 1909 the township was formally proclaimed. A local school opened that year.

* Blocks in the area were sold in 1910 and cleared for sheep, wheat and oats.

* By 1911 Ouyen had become a transport and service centre for a vast area occupied by agricultural and pastoral properties.

* In 1952 a public high school and a Catholic school were opened.

* By 1984 the local Court House had been closed down and taken over by the local Historic Society as a museum.

* The Catholic primary school closed in 2005.

* In 2007 the town restored the historic Roxy Theatre.

There is a useful local website. Check out http://www.ouyen.vic.au. 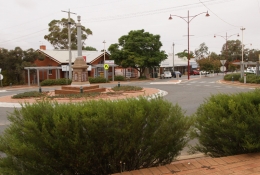 The main street and War Memorial in Ouyen 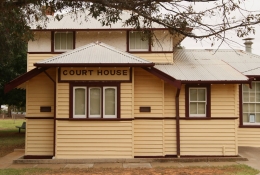 The unusual timber Court House in the Main Street. 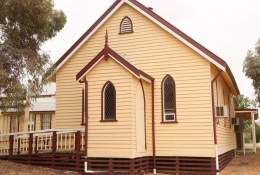 The tiny Torirta Methodist Church (1908) has been moved behind the Court House. 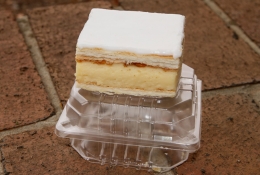 The town's famous Vanilla Slice from the Mallee Bakery