According to Australia Post there is no such place as Pacific Palms. About a decade ago they decided that each specific small "suburb" in the area which was once Pacific Palms should have its own identity and so, what was once the generic Pacific Palms is now Blueys Beach, Boomerang Beach, Elizabeth Beach, Charlotte Bay, Smiths Lake, Sandbar, Booti Booti and Tiona. Pacific Palms, at least in the minds of the locals, is the shopping centre on Boomerang Drive behind Blueys Beach. The main access road is The Lakes Way, a delightful coastal road from Bulahdelah to Forster.
The Pacific Palms district is a holiday and retirement area with a lazy ambience of relaxation and transience. Those who live, or visit, the area are likely to walk, fish, swim or surf. Beach anglers attempt to hook tailor, bream, whiting and mulloway. Rock fishermen hope for drummer, blackfish, bream and tailor and those who prefer the quietness of the lakes are hoping for bream, whiting and flathead.

Pacific Palms is located is 287 km north of Sydney via the Pacific Highway to Bulahdelah and then Lakes Way around Myall Lakes.

A developer named Charles Degotardi promoted and subdivided the area in the late 1950s and, with a little assistance from the local progress association, noting the abundance of cabbage tree palms in the area, he came up with the name 'Pacific Palms' in 1959 believing that it would help sell his subdivisions.

Pacific Palms Visitors Centre
The Lakes Way is the main scenic road from Bulahdelah to Forster. To access "Pacific Palms" or "Bluey's Beach" it is necessary to take the Boomerang Drive turnoff to the east. Along Boomerang Drive is a small boutique shopping centre and the Pacific Palms Visitors' Centre is an attractive building on the edge of the shopping centre. It has interesting, very local and very simple, brochures on subjects including Exploring the Hinterland and The Green Cathedral.

Blueys Beach
There are a number of excellent surfing beaches in the area. The three main beaches are Boomerang Beach, Blueys Beach, Elizabeth Beach. They can all be easily accessed by driving the the circuit that is Boomerang Drive.
Beyond the shopping centre and up either Headland Drive or Bankia Street is Boomerang Point which looks south across Blueys Beach. In recent times "Blueys" (which is reputedly named a after a cow which fell off the southern cliff) has become a chic, upmarket destination for Sydneysiders seeking a quiet retreat. The houses along Newman Avenue have glorious uninterrupted views across the beach looking eastwards across the Pacific Ocean.

Boomerang Beach
To the north of Boomerang Point is Boomerang Beach, a popular surfing beach which can be accessed directly from Boomerang Drive. At the beach's northern end is Charlotte Head, a rocky headland which rises up above the ocean. It is the southern tip of Booti Booti National Park, a popular coastal reserve of scenic lookouts, surf beaches, rainforest walks, thick scrub, beach and rock fishing, sailing, windsurfing, boat-fishing, prawning, skindiving, camping, picnicking and wildlife.

Smiths Lake and Sandbar
Located 5 km south of Blueys Beach, via The Lakes Way, is Smiths Lake and the small lakeside villages of Smiths Lake and Sandbar. Smiths Lake, the town, is a pretty village situated in an attractive bush setting on the shore of lake. On the lakeside is the charming Frothy Coffee Boatshed which offers coffees and light meals (breakfast and lunch) and an idyllic setting. It also has a boat hire where catamarans, motor boats, one and two person kayaks can be hired for one or two hours. Check out http://www.frothycoffeeboatshed.com.au/. Next to the boatshed is the John DeBert Reserve, a superb lakeside destination where there is a boat ramp, picnic, barbecue and toilet facilities. From the veranda of the Frothy Coffee Boatshed it is possible to see the tiny village of Sandbar as well as the sandbar which separates Smiths Lake from the ocean. This is a wonderfully isolated destination with few visitors.

(i) the excellent Ruins Campground and Picnic Area which has 106 campsites and is a large and particularly beautiful area fringed by cabbage tree palms and paperbarks. Holidaymakers love the destination because it offers access to both Wallis Lake and Seven Mile Beach.

(ii) The Booti Hill/Lakeside Walk (7.3 km loop - 2.30 - 3.30 hours). The advice on the website is worthwhile: "Start at Ruins campground and travel clockwise, so the hardest part is knocked off early. Walk out to the stunning Seven Mile Beach and look for the signposted track – this climbs up the northern side of Booti Hill through twisted eucalypts. There are rest spots along the way, and a small opening with a scenic view of Seagull Point right before you enter some refreshing rainforest.
"Eventually the track emerges onto the ridge-crest above Lindemans Cove and joins a fire trail that leads to a small clearing. Go straight ahead for Elizabeth Beach and a terrific opportunity for an ocean dip. If it’s winter, you might even spot a migrating whale. There are also tables and a barbecue just 100m along the trail, so don’t forget the picnic.
"Back on the main walking track, branching west, cross The Lakes Way for a change of pace. The final 3.5km of the loop follows the shore of Wallis Lake, with striking lichens and graceful water birds aplenty.
"Soon you’ll reach a grassy clearing with some marked graves. The Gogerly family are buried here; pioneer fishers once owned the land of the Ruins campground." Check out http://www.nationalparks.nsw.gov.au/things-to-do/Walking-tracks/Booti-HillLakeside-walking-track for more information.

Tiona and the Green Cathedral
Located 8 km north of Blueys Beach (also known as the Pacific Palms shopping centre) on The Lakes Way is the tiny settlement of Tiona (it is a Tahitian word equivalent in meaning to "Zion") with the very unusual Green Cathedral. There is an A4 sheet of information available at the Pacific Palms Visitor Centre. The Green Cathedral is an open air sanctuary which has been consecrated by the Saints Church. It has rough timber pews and a wooden lectern and is located just off the road under a rainforest canopy on the shores of Wallis Lake. There is accommodation in cabins and powered and unpowered camping sites nearby. It is popular for weddings, baptisms and funerals. For bookings contact the Sundowner Tiona Tourist Park, tel: (02) 6554 0314.

Wallingat State Forest Drive
Wallingat State Forest lies to the west of Lake Wallis and east of the Wallingat River. Ten kilometres south of Pacific Palms on the Lakes Way (beyond the turnoff to Smiths Lake) is Sugar Creek Road. This is the beginning of the 25 km Wallingat Forest Drive. Apart from being a quiet dirt road through beautiful bushland the attractions include the Sugar Creek Flora Reserve (7 km) and Wallingat River Forest Park (10 km). Historically there was a small community in the vicinity of the Forest Park which supplied timber for the punts headed upriver to timber mills at Coolongolook and Tuncurry.
At the Sugar Creek Flora Reserve there is a picnic area and an attractive thirty minute walking trail. The Whoota Whoota Lookout (15 km) offers outstanding views over Wallis Lake and south-east down to Hawks Nest and the offshore islands.
The park's birdlife is prolific and includes rare species such as the little tern, the sea eagle and the wampoo pigeon. There are also bandicoots, kangaroos, koalas, possums, wallabies and gliders. For more detailed information check out http://www.nationalparks.nsw.gov.au/visit-a-park/parks/Wallingat-National-Park. It has detailed information on each of the attractions.

* Prior to the arrival of Europeans the area was home to people from the Worimi Aboriginal language group.

* Two ships were wrecked off Cape Hawke in 1816. The Captain of one of the ships, his wife, child and two crew reached Newcastle. The rest were presumed drowned.

* By the 1850s the Chinese shepherds hired by the AAC in the 1850s fished off the coast and dried their wares for sale in Sydney and overseas.

* Ex-convict William Bramble and his family became the first European settlers in the district in 1854. One of his grandsons took up land just north of The Sandbar in the 1880s.

* The Godwin family took up land at Cape Hawke in 1863 and William Newman moved into the area in 1866.

* The Newmans took up most of the land east of The Lakes Way between Smith's Lake and Elizabeth Beach in the 1900s and 1910s.

* Timber was the main source of income in the early days with the timber mills of Bungwahl providing employment. Fishing was also a major activity although problems of preservation and transportation limited its commercial possibilities.

* The local community was badly hit by the effect the 1930s depression had on the timber industry.

* World War II saw a resurgence of demand for timber and the region once again prospered.

* Wally Williams bought up land at Elizabeth Bay in 1946 with an eye to its tourism potential. He subdivided a hundred allotments between Wallis Lake and the beach, set up a shop and a tourist resort. Investors and retirees bought up the land and businesses began to emerge.

* Caravan and/or camping parks emerged in the 1950s at Elizabeth Beach, Santa Barbara and The Sandbar.

* A developer named Charles Degotardi did much to promote (and further subdivide) the area in the late 1950s.

* A local progress association came up with the name 'Pacific Palms' in 1959 with an eye to enhancing its appeal.

* The local school didn't get electricity until 1967.

* The Lakes Way remained unsealed until 1970.

The local website is http://www.greatlakes.org.au/places/pacific-palms which has useful information about the district. 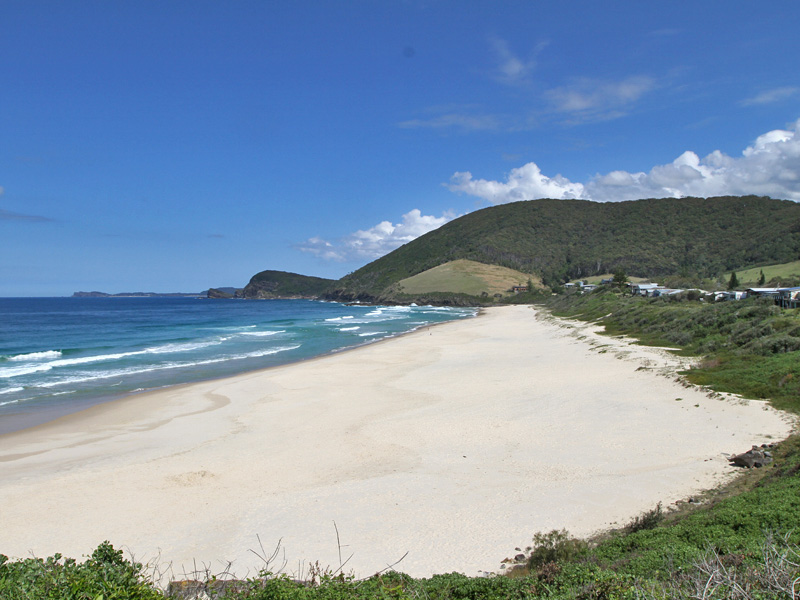 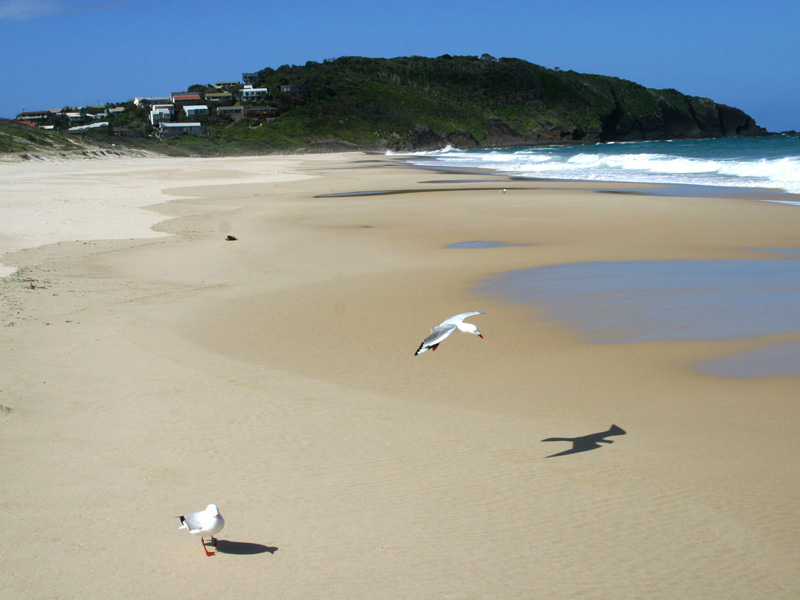 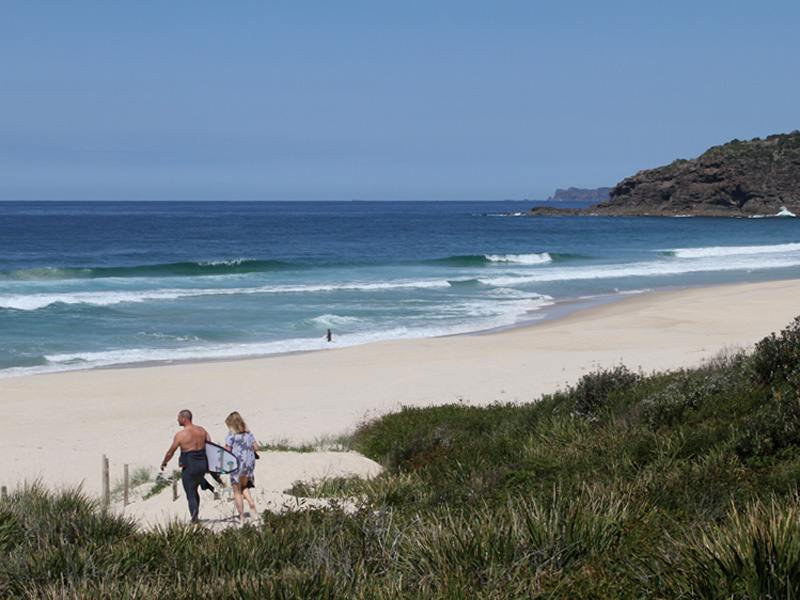 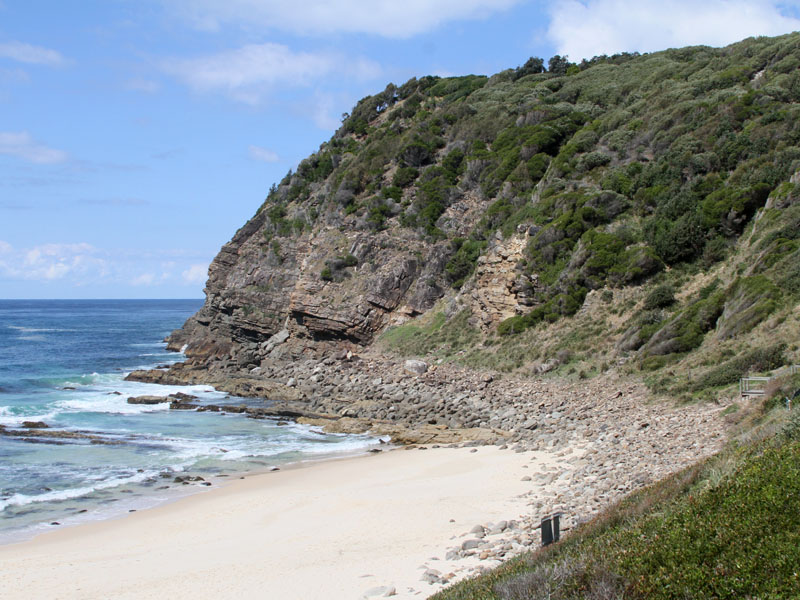 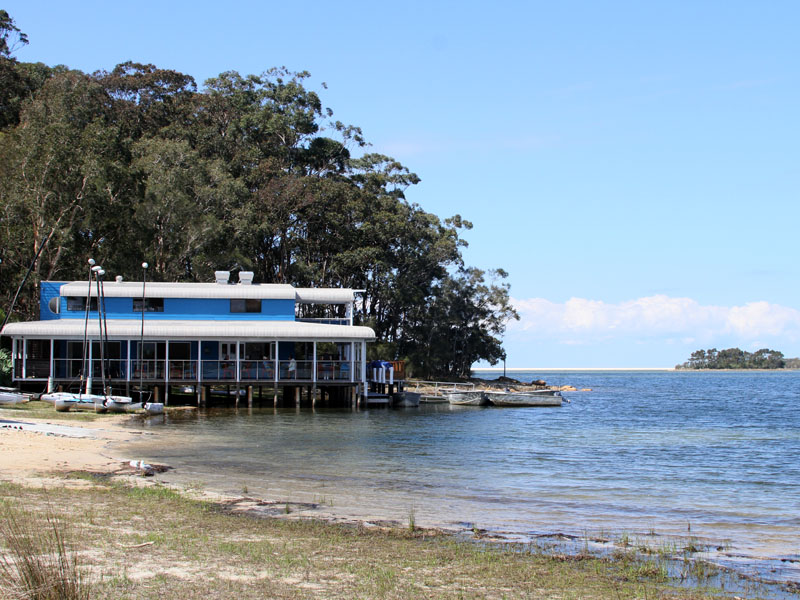