The Princes Highway passes through the middle of Pambula and makes the town, with its cafes and shops, a convenient stopping point for people wanting to break their journey north or south. The town spreads across the Pambula River Valley and has a sweet, unspoiled charm. Central to the appeal of the area is the quiet Pambula Beach.

Pambula is located on the far South Coast of New South Wales, 456 km south of Sydney via the Princes Highway and 525 km via the Hume Motorway, Canberra and Cooma.

It is accepted that "pambula" or "panboola" in the language of the Yuin First Nation people probably meant "two waters".

1. The Town Hall - located in Quondola Street the Town Hall dates from 1883 but it was dismantled in 1922 and re-erected with additions in its present site.

3. A Fascinating Multipurpose Building - located in Quondola Street just up from the Town Hall this building started life as the local Oddfellows Hall In 1913 but over the past century it has been a shop, the Anglican, Methodist and Presbyterian church and, until 2004, St Columba's Uniting Church.

13. McKells - located at 47 Toalla Street, this building was completed in the 1860s and bought by Robert McKell in the 1880s. Today few people remember William McKell but he was born in Pambula in 1891 and is the town's most famous son. He became Premier of New South Wales for five years, was in State Parliament for 29 years and, as Sir William McKell, was Governor General of Australia from 1947-1953.

17. St Peters Catholic Church - located on Monaro Street just up from the Court House this charming building was constructed in 1867-1868 and is the oldest Catholic Church in the district. It had additions in 1892 and 1898. It is Pambula's oldest church.

19. Court House - located on the corner of Monaro and Toalla Streets, the Court House (1860) is the oldest building in Pambula. At various times this site has been the stables, the police barracks, the police station, prisoner accommodation and the court house. The Pambula Court of Petty Sessions was proclaimed in 1858 and the foundation stone for the present building was laid in 1860. The building was completed in 1861 and comprised a courtroom, two cells, a Constable's room and a sleeping room (for the judge??). Use of the cells stopped in 1978 and the building was handed over to the Bega Shire Council in 1994.

23. Covingtons - located at 28 Quondola Street, there is an excellent and very detailed history of the building in the brochure: "This building began life as the Forest Oak Inn and has also been used as a general store, Post Office, court room, police barracks, Doctor's surgery and residence, and in more recent years, a restaurant. The original owner, Syms Covington, was employed as Charles Darwin's assistant on his Beagle voyage, and continued to correspond with him after moving to Pambula, even sending him samples of local plant and sea life for his studies. Syms was involved in many facets of local life and became Pambula's postmaster in November 1854.  Syms Covington's original inn, a two-roomed slab cottage, stood on this site and was licensed in 1855.  It is thought that the present structure was probably erected around 1856.  Sym's died in 1861 and his wife and later her second husband, Llewelyn Heaven, continued to run the Forest Oak Inn. Around 1864, John Behl took over the license. From 1895, the building has been known as "The Retreat", although for a period it was also called "Rosstherne". From 1908, when Dr Howle purchased the house, it has been referred to as "The Doctor's Residence". "

31. Roan Horse Inn - The former Roan Horse Inn (c. 1850s) is located on Bombala Road. It was built in 1848 by William Hibburd who ran it as a pub from 1848-1857. At various times it has been a post officce, a doctor's surgery, a maternity hospital and church services were held in the building in its early years.

32. The Grange - Located at Northview Drive, South Pambula is 'The Grange', a two storey Georgian and Edwardian stone residence in glorious gardens which was built by Captain John Lloyd, a veteran of the Battle of Trafalgar. In 1844 Captain Lloyd was granted 300 acres in lieu of retirement pay and he built this house around that time. As the Pambula River ran along the bottom of the property, it is not surprising that Lloyd did a good deal of rescue work in his boat during the floods of 1851. It is believed that the stone used in its construction came from Devon as ship's ballast. At one time boats could be moored just below 'The Grange' but the river changed its course in the floods of 1860. It has been claimed that Lloyd had the windows of 'The Grange' barred because he did not like the Yuin First Nation people in the district.

Pamboola Wetlands
Panboola Wetlands, located in Bullara Street at the bottom of the town's main street, are a pleasant retreat for birdwatchers and bushwalkers. It is part of the floodplain below the town and the 77 ha wetlands are home to many species of birds, reptiles and flora. The wetlands are an interesting combination of freshwater billabongs, salty marshlands, mangroves, a former horse racing course and the edge of the huge Ben Boyd National Park. The wetlands are part of a long-running project to protect and restore the flood plain and a system of walking and cycling tracks, viewing platforms, tables and information panels have been installed.  For details check out http://www.sapphirecoast.com.au/point-of-interest/pambula-walks.

Pambula Beach
From Pambula township it is necessary to head east along Bullara Street and continue for 3 km to reach Pambula Beach and the headland at the river mouth. The beach is located at the southern end of Merimbula Bay and is long, flat, hard and impressive. There is a walking track out to a pleasant lookout.

* Prior to the arrival of Europeans the land was inhabited by the Dyirringany and Thaua Aborigines. There are 3,000 year old middens in the area.

* The area was first explored by Europeans when, on 18 December, 1797, George Bass sheltered from a gale in the Pambula River. He recorded the beauty of the location in his diary.

* The Imlay Brothers (Peter, George and Alexander) owned land from Broulee to south of Twofold Bay and west to the mountains by the 1830s. They established their head station on the banks of the Pambula River.

* By the early 1840s the Sydney merchants, the Walker Brothers, had taken over the Imlay Brothers holdings.

* In 1843 Surveyor Townsend surveyed land on the river flats and a town was established.

* In 1844 Captain John Lloyd RN was granted 300 acres upon which he built The Grange.

* In 1845 a road was built connecting Eden to the Monaro Plains. It passed through the small village of Pambula. Around this time the Governor Fitzroy Hotel was built by the Walker Brothers.

* In 1851 the few settlers at Pambula experienced a flood and moved the village to higher ground.

* By 1856 the town was prospering with five licensed hotels.

* The foundation stone for the Court House was laid in 1860.

* In 1888 the discovery of gold on the Yowaka and Pipeclay Rivers prompted a goldrush in the district.

* By 1891 there were eleven mining companies in the Mount Gahan area.

* By 1915 gold mining had ceased in the area. The population declined.

* Today Pambula is a quiet town with most of the holiday action in the area focused on Pambula Beach.

The Sapphire Coast website has useful information on the town. Check out http://www.sapphirecoast.com.au/the-region/towns/pambula. 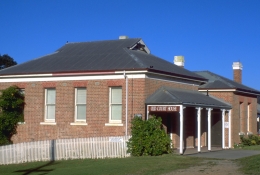 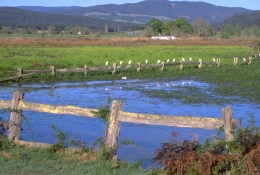 The view across the valley just to the south of Pambula. 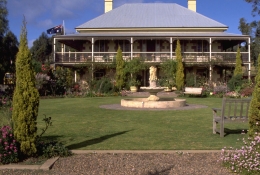 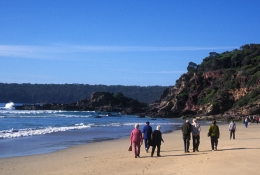 A walking group of retirees on Pambula Beach.