Paraburdoo is a mining town which is located at the south western end of the Hamersley Range National Park. It was established in the early 1970s as a town to house miners and today the population, which has remained at around 2,000 since the 1970s, works at the surrounding Rio Tinto iron ore mines. Like most of the inland Pilbara, the town's primary attractions include water holes which are suitable for swimming, admiration of the isolated landscape and the opportunity to see wildlife, particularly birdlife, in the surrounding countryside.
The Rio Tinto Iron Ore website describes Paraburdoo as: "The town has a population of around 2000 people and has a strong sporting community with facilities including a swimming pool, tennis, netball and basketball courts, cricket and football fields, motor cross, bowling, golf, softball, teeball, and swimming clubs. Other facilities provided in town are a supermarket, newsagency, bottleshop, pharmacy, travel agent, hardware store, bakery, nursery, Karingal Neighbourhood Centre and op shop, youth centre, day care centre, playgroup, toy library, clothing boutique, gift shop, mobile hairdressers and drive-in. There is also a police station, Royal Flying Doctor Service, library, shire office, post office, credit union, TAFE, primary school, child health clinic, doctor's surgery, medical centre, visiting veterinary surgeon, and Anglican and Catholic Churches. The airport, which services both Paraburdoo and Tom Price, is located only 15 minutes from Paraburdoo and is serviced by two planes daily." Once a closed mining community, the town was sold to the local shire by Rio Tinto.

Paraburdoo  is located 1528 km north of Perth via the coast road and Nanutarra Road. It is also 1528 km via Newman and Tom Price. It is located 24 km north of the Tropic of Capricorn.

Early Europeans in the area named a land lease 'Pirraburdoo' after a local Aboriginal word which was widely accepted as 'white cockatoo'. Some sources claim that 'piri' means meat and 'pardu' means feathers. This makes sense as the white cockatoos were a source of food for the local people.

Resilience Sculpture
On the road from Tom Price, just before entering Paraburdoo, there is an impressive sculpture named "Resilience".
The sign proudly says "A Sculpture Created by the community of Paraburdoo
"The sculpture you are about to view is titled Resilience. It is a one-of-a-kind in Australia and the product of a unique and innovative approach to creating public art in Australia.
"Envisaged by Western Australian artist Alex Mickle, the sculpture was constructed by the local community for the town of Paraburdoo, as part of a state wide FIVE project.
"The concept, themes and design of this artwork are a direct result of conversations that occurred over a 12-month period between the artist, the mine workers and community members of Paraburdoo. Chance meetings, research, experimentation and visual enquiry informed every aspect of the work you see before you.
"The sculpture pays homage to the mining industry of the Pilbara, the people of Paraburdoo, local Indigenous culture, the unique beauty of the landscape and the spirit of regional communities in Western Australia."
The text on the board near the sculpture reads: "Resilience is based on a spherical shape called the 'torus', which is considered universally significant. Modern physicists currently believe this shape best describes the dimensional properties of our universe with regard to its radial and revolutionary properties - specifically, its spherical coordinates as they relate to the Earth's magnetic field.
"Because the torus is also the same form created by a radiating blast wave - the pressure wave produced by an explosion - it references the blasting techniques that were used in the formation of the sculpture itself.
"This circular design for the sculpture also works as a visual device for focusing attention on the beauty of the surrounding landscape. The smooth and simple lines connect with and highlight the ruggedness of this country and its ever-changing colours. The space arund the artwork is equally important to the success of the work as a whole.
"In considering the sculpture's details, artist Alex Mickle was looking for iconic shapes, objects or machinery that could speak to the iron ore industry at a glance. He wanted to use objects that are simple and easily identifiable to everyone, yet also lend themselves well to abstraction.
"A tyre - whose shape is instantly recognisable in the sculpture - is a familiar object, yet the tyres used in the mining industry are at such a scale that they induce a sense of awe amongst those who see them for the first time. RESILIENCE incorporates this form and concept as a core feature. There is an excellent and detailed website which chronicles the making of the sculpture. The blog by Alex Mickle is particularly interesting. Check out http://five.org.au.

Terex Haul Truck
Located on Camp Road is a reminder of the trucks that were used to haul the iron ore at the Paraburdoo Mine. It is called a Terex Haul Truck and was locally known as a "Jolly Green Giant". There was a fleet of 17 of these huge vehicles which first went into service in 1976. They continued to be used until 1987 and during that 11 year period they hauled over 285 million tonnes. In 1976 each vehicle was worth $675,000. They were capable of carrying 154 tonnes and had a maximum speed of 40 km/hr.

The Hamersley Ranges
Paraburdoo is located on the edge of the desert and in the Hamersley Ranges. The result is that both the drives from Tom Price and from the North West Coast Road are noted for their beautiful, raw and rugged, scenery and the rich variety of wildflowers in season.

Kelly's Pool
Located beyond the Paraburdoo Golf Course on Camp Road 8 km outside town, Kelly’s Pool is a popular local place which is ideal for a picnic. Swimming is not permitted.

The Mines
Paraburdoo Mine
The Mining Link website has comprehensive information about the Paraburdoo mine. Check out http://mininglink.com.au/site/paraburdoo where it explains: "Greater Paraburdoo Mine Produces 22.5 Million Tonnes of Iron Ore Annually. Greater Paraburdoo includes the Eastern Range, Channer and Paraburdoo open cut mining operations that produce 22.5 million tonnes of Pilbara Blend iron ore a year. Iron ore production began at Paraburdoo in 1972 with the ore being exported out of the port at Dampier. Most of the workforce employed at the mine live in the town of Paraburdoo although 22 percent are fly-in fly-out workers. The mine has a fleet of 27 haulage trucks and six loading units. The ore is transported to Dampier along Rio Tinto's 1,400 kilometre long private railway system. It is the largest privately owned railway system in Australia that links the 14 Rio Tinto mines operating in the Pilbara to the coastal ports at either Dampier or Cape Lambert.
"Paraburdoo Ore is Blended With Other Pilbara Ores to Produce the Pilbara Blend
"Mining at the Greater Paraburdoo mines takes place extracting ore from the Brockman bedded iron ore deposit. Paraburdoo ore is processed on site before it is loaded onto railway trucks and transported along the Hamersley and Robe River Railway that take it to the coast. When unloaded at the port it undergoes blending and screening before being loaded onto ships for exporting to overseas customers. The Paraburdoo ore lumps and fines are blended with ores mined from other Rio Tinto mines that make up the Rio Tinto Pilbara Blend. Maximum fines size is kept at 6.3mm and lumps at no more than 31.5mm. Rio Tinto is currently undertaking a massive expansion program at its Pilbara iron ore mines with the aim of producing a total of shipping capacity 333 million tonnes annually by 2015."
"The journey from Paraburdoo to Mount Tom Price is difficult and six engines are used to pull the train up a continuously adverse 300 metre gradient. A typical train stretches over 2 km and has 200 cars carrying a total weight of 25,000 tonnes. There is no tour of the mine site and no lookout where visitors can view the mine or the works.

Channar Hamersley Mine
There is no tour of the mine and there is no lookout where visitors can view the mine or the works. However, the Mining Link website has comprehensive information about the Channar Hamersley mine. Check out http://mininglink.com.au/site/paraburdoo where it explains: "Rio Tinto, one of the worlds largest iron ore miners, owns the Channar- Hamersley iron ore mine as a joint venture through its wholly owned subsidiary Hamersley Iron Pty Ltd and Sinosteel Channar Pty Ltd, a fully owned subsidiary of Sinosteel Australia Pty Ltd. The joint venture to mine the Brockman bedded iron deposit was agreed to in 1987 with Hamersley Iron holding 60 percent of the shareholding in the venture and Sinosteel 40 percent. Part of the agreement was that Sinosteel Corporation, a Chinese steel maker, would purchase all the iron ore produced at the mine for the life of the mine.
"The Channar-Hamersley open cut mine that is situated 20 kilometres east of Paraburdoo in the Pilbara Region of Western Australia commenced production at the Channar Mine site in early 1990 and eight years later had reached its design production target of 10 million tonnes a year. The first 200 million tonnes to be produced from the Channar-Hamersley mine was achieved in 2012.
"Channar-Hamersley was the Biggest and First Venture Undertaken Between China and Australia. At the time of agreeing to the Channar Mine joint venture it was one of the biggest investments ever agreed to between China and Australia and the first overseas mineral resource project undertaken by a Chinese company. The joint venture agreement was officially welcomed by both the Australian and Chinese governments and was given considerable support by both governments to ensure its success. Twenty six years later it remains an important Chinese overseas investment project.
"Ore mined at the Channar-Hamersley open pit is processed by means of two stages of crushing before being taken by conveyor belt to another processing plant at Paraburdoo for further treatment and blending with other ores to become part of the Rio Tinto Pilbara blend. Channar- Hamersley ore is allowed to provide 11 million tonnes of crusher feed ore a year into the Paraburdoo Processing Plant that handles a total of 23 million tonnes a year which is provided by other mines also servicing the plant such as the Eastern Range Mine and the Paraburdoo Mine.
"The blended iron ore leaves the Paraburdoo Processing Plant and is transported by rail on the Hamersley and Robe River Railway to Dampier where it is once again blended and screened with ores from other Rio Tinto mines from throughout the Pilbara before being exported to China.
"The workforce at the Channar-Hamersley Mine mainly consists of residential personnel from Paraburdoo, although fly-in-fly-out workers are also accommodated."

* Prior to the arrival of Europeans the area was home to the Yinhawangka Aboriginal people.

* Europeans started moving into the area in the 1860s. They were looking for land to graze sheep.

* The construction and development of Paraburdoo occurred in the early 1970s.

* The town was originally constructed by Hamersley Iron Pty Ltd between 1970 and 1971 to house workers at the nearby mine.

* The first house in the town was occupied in September 1970.

* In the early years the town was a 'closed' mining town with accommodation only available to miners and their families.

There is no visitor information in Paraburdoo. The nearest is at Tom Price Visitor Centre, Central Road, Tom Price, tel: (08) 9188 5488.

The local shire has a useful website. Check out http://www.ashburton.wa.gov.au/visit-ashburton/paraburdoo. 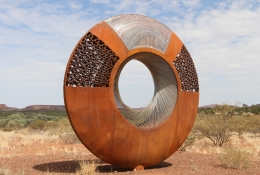 The sculpture Resilience on the hill entering the town. 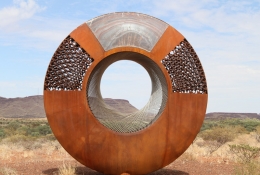 The sculpture Resilience, created by the community and sculptor Alex Mickle. 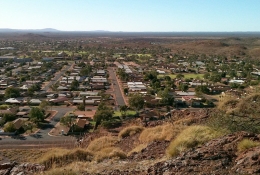 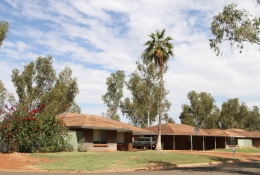 Miners housing in the town of Paraburdoo. 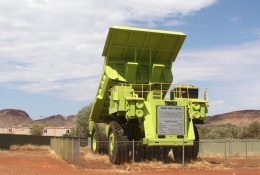 A Tyrex Haul Truck - known as a Jolly Green Giant - on the edge of Paraburdoo. 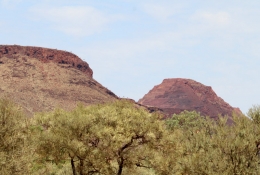 Radio Hill to the south of the town. 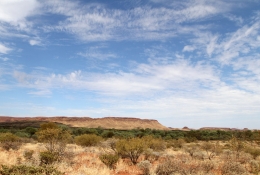 The landscape around Paraburdoo. 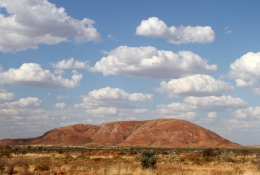 A section of the impressively beautiful Hamersley Range near Paraburdoo.