In recent times, due to some serious and clever promotion by Ross and Jane Fargher (the owners of the Prairie Hotel), Parachilna has become one of those outback destinations that everyone wants to visit. The reason: the exceptional wild food - kangaroo, emu, goat and camel - which is served in the hotel's restaurant and the tasteful modernisation of the hotel's accommodation. In fairness Parachilna is so small that if you are not looking you could easily pass it by. It is nothing more than a railway station, a few railway outbuildings which have been turned into backpacker accommodation, and the hotel.

Parachilna lies 489 km north of Adelaide and 196 km north of Port Augusta. It is east of Lake Torrens and west of the Flinders Ranges.

Prairie Hotel and Feral Food
South Australia leads the rest of the country in native tucker, and nowhere does this prove to be more interesting than the Prairie Hotel in Parachilna. Ever tried Feral Antipasto comprising smoked 'roo, camel mettwurst, emu pate, goats cheese and bush tomato chutney, followed by a Feral Mixed Grill of ‘emu fillet and camel sausage’ and rounded off with a quandong pie. The pub is great fun, and it offers everyone an opportunity to eat delicious native tucker.

Leigh Creek - Port Augusta Coal Train
The coal train from Leigh Creek coal mine to the Port Augusta Power Station comes through Parachilna daily. It is a remarkable sight stretching 161 wagons (2.85 km) long; holding 10,200 tonnes of coal; being driven by three 3,000 horsepower locomotives and making a daily round trip of 500 kilometres at a speed between 70 km/h (loaded) and 80 km/h (empty). In the absence of other attractions it is watched by most of the people staying at the hotel as it passes by.

Parachilna Gorge and the road to Blinman
The 32 km road from Parachilna to the historic copper mining town of Blinman is particularly beautiful. It cuts through jagged desert gorges and this area of the Flinders Ranges is noted for its harsh, spectacular colours and its raw beauty. Check out http://www.campingsouthaustralia.com/parachilna-gorge.php for information about camping in the Gorge. There is an excellent walk from Parachilna Gorge to the Blinman Pools waterfall.

* In 1863 Parachilna was surveyed but only 24 blocks were laid out. The location was determined by a nearby government well and proximity to the copper mining town of Blinman.

* In 1876 the Parachilna Hotel was first licensed and the following year Walter Buntin opened an eating house.

* In 1991 Ross and Jane Fargher purchased the Parachilna Hotel and changed its name to the Prairie Hotel.

* In 2000 the surrounding countryside was used as the setting for Phillip Noyce's Rabbit Proof Fence.

There is a good historic overview at http://www.southaustralianhistory.com.au/parachilna.htm and the Prairie Hotel website - http://www.prairiehotel.com.au/ - is useful for things to do around the area. 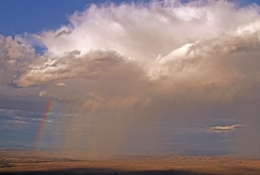 Storm and rainbow over Parachilna. 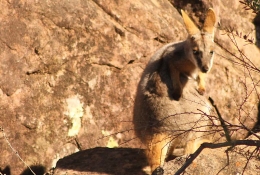 A rare yellow-footed rock wallaby hides in the rocks at Parachilna Gorge. 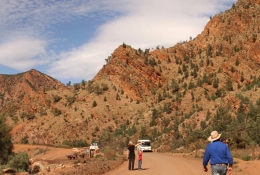 Parachilna Gorge in the Flinders Ranges. 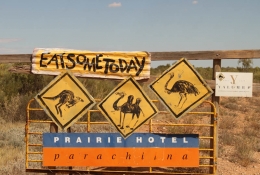 A sign promoting the Prairie Hotel's menu of "feral food" - kangaroos, camels and emus - and they are all delicious. 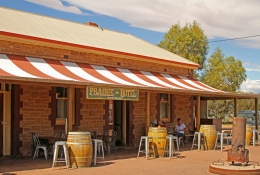 The famous Prairie Hotel at Parachilna - home of "feral food". 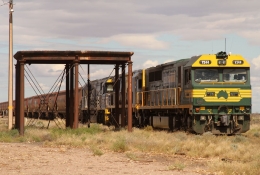