Quiet service town on the banks of the Murray River

Paringa is a medium-sized town on the Murray River which in recent years has almost become a suburb of Renmark. It proudly claims to be the first town visitors reach in South Australia when they cross the border from the eastern states. The town's primary appeal is related to the Murray - it is ideal for houseboat hiring; for inspecting the unusual suspension bridge; for hiring kayaks and canoes; and for just mooching along the banks.

Paringa is located 261 km north-east of Adelaide and 5 km from Renmark.

Some sources claim that "paringa" means "land near the river" in the language of the local Naralte Aboriginal people, but this cannot be confirmed.

Bicycle Hire
It is possible to hire bicycles for a half or full day at the Renmark Paringa Visitor Information Centre. Check out http://www.visitrenmark.com/business-directory/bicycle-hire or phone 1300 661 704.

Canoes and Kayaks
It is possible to hire canoes and kayaks and to explore the Murray with an organisation called Canoe the Riverland. They also offer a range of canoe tours including a Sunset Tour, a kayak Moonlight Tour and an Overnight Camping tour. Check out http://canoetheriverland.com.

Paringa Suspension Bridge
Opened on 31 January 1927 the Paringa Suspension Bridge is one of only four suspension bridges across the Murray River. It still opens between 9.30 am and 2.30 pm to allow the larger paddle steamers to traverse the stretch of the river. The bridge looks down on the Paringa Council Marina which offers the visitor houseboats for rental. The history of the bridge was recorded in 1927: "The Bridge over the River Murray at Paringa is 568 feet long. It consists of five fixed spans and one moveable span, on concrete piers and abutments, each of the latter being supported by a nest of concrete piles. The Bridge is designed to carry a single track railway of the heaviest South Australian Standard (Cooper's E50 loading) and on both sides of the river spans are cantilever roadways with a clear width of 12 feet arranged for one way traffic. At either end of the bridge is a plate girder span, while the three main spans consist of parallel chord Pratt trusses each 112 feet 6 inches long. The second span from the Paringa end is a 78 feet lift span, counter balanced type, which can be raised through a vertical height of 30 feet, giving 44 feet clearance above lock level, in one and a half minutes. There were 700 tons of steel work necessary for the superstructure and the total estimated cost of the completed work is £109,400, of which the Roads and Bridges Department is contributing £23,100."

Renmark/Paringa Community Museum
Located on the banks of the Murray River next to the Paringa Suspension Bridge, the museum opened in 1975. It has over 50 stationary engines on display - all are in full working order - and a large collection of farm machinery and implements. It is open from 9.00 am - 2.00 pm Monday to Friday and 9.00 am - noon on Saturdays, tel: 0423 050 732.

The Black Stump
Located on Murtho Road this huge root system for a 600 year old red river gum measures over 8 metres across. It may be one of the largest extant tree root systems in Australia but it doesn't really have a claim to being the real black stump. Still, if you are interested in collecting images of very large tree stumps this certainly is as big as they get. Check out the entries on Merriwagga and Coolah for serious claimants to the origin of the expression "beyond the black stump".
There is an interesting plaque beside the black stump which explains "It has been at this location since 4 July, 1984 when Frank Turton and his wife Diane sighted it while on a houseboat holiday near Chowilla Station 56 km upstream from Renmark. The 600 year old River Red Gum root system of the massive tree trunk hung over a three metre clay bank. It had fallen into the river in tthe 1917 flood and later positioned onto the bank because it was a navigational hazard. Frank, a wood carver by trade was at the time creating natural wood signs and souvenirs and had dreams of developing a tourist attraction at his workshop in Paringa. The intricate design created by nature captured Frank's imagination and he set about planning on how the stump could be relocated as the show piece of his Paringa premises." It then explains how a special chain saw had to be hired from Queensland to cut the root system; how 12 44 gallon drums were attached so it would float; how it took five days to float it down the river and how it had to be removed by a crane located near Paringa Bridge.

Murtho Forest Reserve and Heading Cliffs
Located 15 km north from Paringa on the Murtho Road, the Murtho Forest Reserve has a parking area and a place for launching boats. It is surrounded by gum trees and willows and is peaceful and attractive. There is also an excellent view from Heading Cliffs Lookout which is recognised as one of the finest vantage points on the shores of the river.

Customs House and Custom House Houseboats
Located 30 km north of Paringa via Murtho Road, and sitting on the South Australian-Victorian border, is the Customs House built in 1884 to monitor the trade passing between South Australia and Victoria. There is an excellent downloadable PDF (check http://www.visitrenmark.com/business-directory/old-customs-house) which points out that: "The Customs House watched over river trade for about 20 years and was served by four customs officers in that time. Legend has it that river-boat skippers objected to paying their way and often goods were smuggled over the state borders or dumped to avoid paying taxes. One skipper who objected to paying the then impost of 10 pounds as poll tax on his Chinese cook had the fellow walk through the scrub past customs, supposedly to rejoin the boat further upstream, however the cook never made it back to the riverboat - he was later seen working on a sheep station further North. At the time duty on a sheep was (in today’s money) 10 cents, pigs 50 cents, cows $2 and horses $4 - little wonder the skippers objected to paying! From time to time Customs Officers fired shots over the bows of passing steamers, whose skippers had ‘forgotten’ to call in and declare their loads. In 1901, Federation brought an end to customs houses, free trade was allowed between states. The advent of railways to river towns (especially in Victoria and NSW) saw the riverboat trade decline. In 1902, the Commonwealth Gazette announced The Customs House at Port Murthoo in the State of South Australia was to close. In 1904, the land was resumed by the Crown and the building was sold to Richard Stoeckel, it became a station homestead. Richard Stoeckel decided ‘Murthoo”….said to be an obscene aboriginal name for animal excrement….was inappropriate so renamed the building Boundary House and the area Border Cliffs. Additional rooms were added to Boundary House to accommodate the growing Stoeckel family, a unique cellar, partially underground and a ‘two holer’ outhouse (the smaller hole for the use of children) were built." Today it is an important destination for people wanting to hire a houseboat. Check out http://www.customshouseboats.com.au for the range of 9 houseboats for rental.

Lock 5
Located only 2 km downstream from Paringa on the Lock 5 Road is Lock 5 where the Murray River is 16 metres above sea level. It was completed in 1927. There is an excellent and comprehensive overview of all the locks on the Murray River at http://www.murrayriver.com.au/about-the-murray/locks-weirs-dams-barrages. There is also an excellent short video of the Lock 5 lockmaster describing how it works and who uses it. Check out https://www.youtube.com/watch?v=6VUaHey7RoQ. Further along Lock 5 Road is the Lock 5 Sandbar which has a wide, sandy beach. Be warned: 18 people, at the last count, have died swimming in this area. It is extremely dangerous.

* Prior to European settlement the area was inhabited by the Naralte Aborigines who were described by one early settler as "very friendly and quickly picked up a smattering of English. They were willing to work ... and attempted to instruct the newcomers in their methods of hunting."

* The explorer Captain Charles Sturt rowed a whale boat down the Murrumbidgee in late 1829 and reached the junction with the Murray River on 14 January 1830. He passed the present site of Paringa in late January and reached Lake Alexandrina on 9 February, 1830.

* Renmark did not become important until 1887 when George and William Chaffey signed an agreement with the South Australian government which created an irrigation scheme. Renmark is the country's oldest irrigation settlement.

* By 1892 the Chaffey experiment had collapsed.

* In the 1890s 'Breaker' Morant worked in the local area on the Paringa Station. When Paringa Station went broke Morant and two of the boys from the station joined the Bushveld Carbineers and served in the Boer War. He was subsequently executed by the British.

* The town was proclaimed after a local group held a meeting in 1911 and determined that they wanted to become independent of the District Council of Loxton.

* In 1913 the railway reached the town from Tailem Bend.

* In 1927 a railway bridge was built across the Murray River at Paringa and the railway extended to Renmark.

* Today Paringa's chief appeal lies in its easy access to the Murray River and the range of excellent parks and vantage points over the river that it offers.

Renmark and Paringa have an excellent website with lots of suggestions for accommodation, eating out and things to do. Check out http://www.visitrenmark.com/attractions. 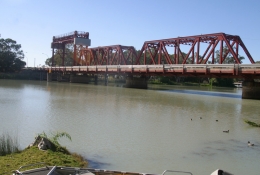 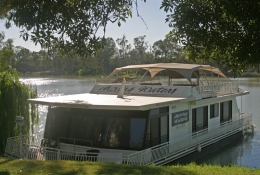 A houseboat moored near the Paringa Bridge. 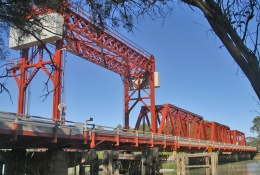 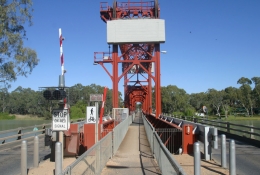 The cycleway on the Paringa Suspension Bridge. 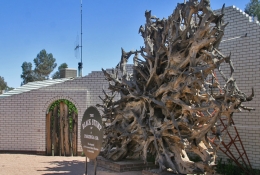 The Black Stump at Paringa. 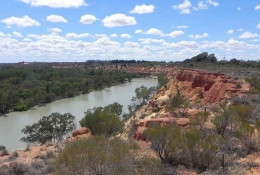 Heading Cliffs and the Murray River near Paringa.