Often Peak Hill, because it is the second largest town in the Parkes Shire and because it is only 49 km north of the larger centre, is grouped in as an activity to be undertaken by people visiting Parkes. This is unfair. It deserves to stand as a worthwhile place to visit in its own right. It is a small town created as a result of a very substantial discovery of gold. It is a rarity: a gold mining town which has endured rather than boomed and busted.

Peak Hill is located 406 km west of Sydney via the Great Western Highway to Parkes and then north for 49 km on the Newell Highway. It is 70 km south-west of Dubbo and 267 m above sea-level.

Peak Hill almost certainly got its name, or shares its name, with the Peak Hill mining company which, in turn, took its purely descriptive name from the shape of the 90 metre high hill containing large masses of iron, ferruginous quartz and quartzite which formed the basis of the town's gold mine.

Peak Hill Open Cut Experience
Turn east off the Newell Highway into Mingelo Street in the centre of town. After 400 metres you will reach the Track Head Car Park which is the start of the Peak Hill Open Cut Experience. As the Parkes Shire Council website explains: "This is a walking experience which requires a low to moderate level of fitness to complete most of the trails but, for less active visitors, there is 'easy access' to the main viewing platform and a pleasant, flat return walk along the 'low wall' of the main open cut with spectacular views across to the 'high wall'." In total the Open Cut Experience involves five open cut mines, five self-guided walking trails and some historic mine workings. The area has been established on the site of the two original mine shafts which were hand-excavated in the late 19th and early 20th centuries - one to a depth of 100 m and a length of 200 m. There are a number of artefacts - old boilers, old houses, old pieces of machinery - and the walks are all clearly signposted with detailed boards explaining the history and origins of the mines and artefacts. Group tours of the mine are offered all year round by appointment, tel: (02) 6862 6000. Check out http://www.parkes.nsw.gov.au/index.php?option=com_content&view=article&id=496158&Itemid=3020 for more details. It is also possible to go gold panning with tours starting at the Kiosk at the Track Head Car Park. The site is open from 9.00am - 4.00 pm daily.

The Big Fish Fossil Hut
Located at the Peak Hill Caravan Park, 2 Ween Street (turn west off the Newell Highway) the Big Fish Fossil Hut was opened in 2009. It is the brainchild of Michael Durrant who has been establishing 'World of Fossil' museums around Australia. The Peak Hill displays include "ancient wildlife groups that have lived across Eastern Australia over the past 700 million years ... including trilobites, ammonites, seastars and arinoids through to fish, amphibians and dinosaurs.  One dinosaur case features a giant rib of a sauropod dinosaur, similar to those recently discovered in Queensland … the gigantic 'star' of this collection is the largest fossil fish on display anywhere in Australia.  It is called Xiphactinus, and lived during the time of the dinosaurs. 'The Big Fish Fossil Hut' specimen is about 4.5 metres long." Entry is free if you are staying at the Caravan Park. Others pay a small entrance fee. It is open from 8.00 am - 9.00 pm daily, tel: (02) 6869 1422.

Peak Hill Flora and Fauna Nature Walk
This is a pleasant 1.4 km walk through a 9 ha Flora and Fauna Reserve with the possibility of seeing kangaroos and rock wallabies, hearing a range of native birds and, particularly in spring and summer, experiencing the beauty of the Australian bush in full bloom. The Nature Reserve is located at the edge of town, off Golf Club Road. There is a turnstile gate. Check out http://www.peakhill.nsw.au/index.php/see-do/flora-and-fauna-reserve.

Bogan Weir
Bogan Weir is located 7 km from Peak Hill and offers a pleasant rural environment where the visitor can have a picnic, do some bird watching, canoeing and fishing. Head north out of Peak Hill and turn left onto Tullamore Road.

Goobang includes the Hervey, Curumbenya and Bumberry mountain ranges and valleys. The park is home to over 300 plant species including 40 orchid species and it is also home to thirteen rare and endangered animals including the koala, squirrel glider, brush-tailed rock wallaby, regent honeyeater, glossy black cockatoo and superb parrot. It is an ideal park for bushwalking, picnicking, camping, photography and nature studies. The park brochure can be downloaded at http://www.nationalparks.nsw.gov.au/~/media/visitor/files/PDF/Brochures/goobang-pdf.aspx. It provides a good map and descriptions of two walking tracks in the park. The 1 km Caloma Trig Walking Track (easy, thirty minutes each way) and the Burrabadine Peak Walking Track (4 km, 2 hours).

* In 1817 a party led by John Oxley became the first Europeans to pass through the district. They passed only a few kilometres from the present townsite.

* In 1835 Major Thomas Mitchell led an expedition through the area, explored the Bogan River, and wrote that the local Wiradjuri were intelligent, resourceful, sincere and possessed of an unaffected nature. At the time he estimated there were around 1,000 Aborigines living along the Bogan River.

* By the early 1840s Lee and some of the other squatters were known to have committed atrocities against the local Wiradjuri.  William Lee actually had his squatting license revoked after a massacre of Aborigines along the Bogan River.

* Most of these massacres went unreported. When Major Mitchell came through the area in 1845 he noted the complete absence of Aborigines. He also noted that most of the land adjacent the Bogan had been occupied by that time.

* Peak Hill became a town in 1889 when gold was discovered and two open-cut mines were established.

* Peak Hill was incorporated as a municipality in 1894.

* The railway line was officially opened in 1914.

* Major mining operations at the Peak Hill mine ceased in 1917.

* On 14 August, 1918 Peak Hill became the site of the first bulk wheat silo (with a capacity of 50,000 bushels) constructed in New South Wales. The crops in the following years were poor and the silo was not filled until 1920.

* The price of gold justified the reopening of the mine and this occurred in 1996. Between 1996 and 2002 Alkane Resources Ltd extracted 4,524 kg of gold from 4.9 million tonnes of crushed rock.

The Parkes brochure - downloadable at http://www.parkes.nsw.gov.au/images/documents/parkes/Tourism/park%20guide%202012.pdf - has a very detailed and useful section on Peak Hill. The town has its own excellent website - check out http://www.peakhill.nsw.au/ 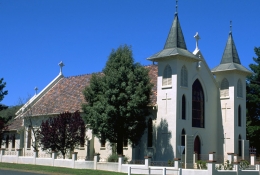 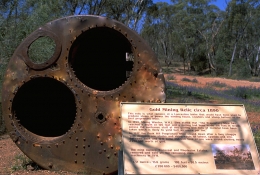 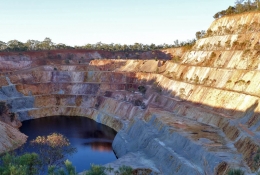 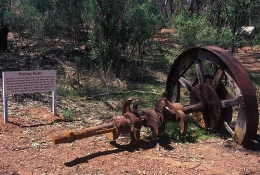 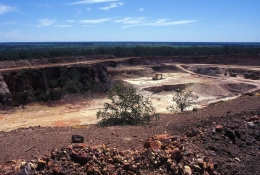 Peak Hill was still being mined when I first visited it in 1990.