Timber and tourism town in the heart of Western Australia's karri, jarrah and marri forests

Pemberton is a bustling timber town set amidst rolling hills and surrounded by forests of huge karri, jarrah and marri trees. The local obsession with timber is described in Thomas Wood's book Cobbers which describes Pemberton in the 1930s as a town where "Karri lives there. King Karri they called him, and smile shyly. Why? Karri is king in the bush. What else has a claim against a giant two hundred feet high, slim and straight and graceful, whose bark is watered silk? And nearly every one in Pemberton is in the Royal service. They talk karri as other men talk sheep or fruit or gold; you must fall in with their mood or be an outcast." Today Pemberton's main attractions are related to the timber industry. There is the giant Gloucester Tree; an old timber carrying railway line; a museum which focuses on the timber industry; and a number of pleasant drives through the forests which surround the town. In recent years the town has increasingly become a tourist destination.

Pemberton is located 323 km south of Perth and 125 km east of Augusta.

Mr W.L.Brockman, a farmer in the district, suggested that the town be named Pemberton after Pemberton Walcott who was the first European settler in the area in 1862.

Gloucester Fire Lookout Tree
Located 3 km east of the Vasse Highway in Pemberton, the huge Gloucester Tree is the town's premier attraction. It is a fire lookout which rises 64 m above the ground and can be accessed by a daunting 153 rung ladder which winds around the trunk.
A Forests Department notice explains the origins of these lookout trees. "In the late 1930s the Forests Department began to establish a network of lookouts so that forest fires could be rapidly detected. In contrast with the northern forest areas the gentle undulating country and very tall trees of the southern forest offered a few vantage points for fire lookouts. To build towers high enough to see over the forest would have been too expensive. An alternative was a cabin built high enough in one of the taller trees. The first Karri fire lookout tower, called Big Tree, was constructed to the west of Manjimup in 1938. By 1952 eight tree towers had been constructed".
The Gloucester tree was prepared for use as a lookout in 1946. During the construction of the lookout cabin the Duke of Gloucester visited the site and the tree was named after him. A word of warning: while the view from the top is unforgettable, if there is a wind the experience of swaying from side to side can be terrifying.

Pemberton Tramway Company
Located at the Pemberton Railway Station, the Pemberton Tramway Company offers two departures daily - Monday to Saturday - at 10.30 am and 2.00 pm. The website (see  http://www.pemtram.com.au) explains: "The Pemberton Tramway Company Pty Ltd is a privately operated tourist railway ... which conveys tourists through deep forests and picturesque countryside as well as recreating the history of the timber railways that were so important to the region's development and growth. The railway uses paid and voluntary staff, and operates diesel hydraulic trams over a total route length of 10 km."
Historically the Pemberton to Northcliffe Railway, which was completed in the early 1930s, is a scenic journey with the railway crossing rivers and passing areas which, in season, are ablaze with wildflowers. It is worth remembering that when it was built the railway from Pemberton to Northcliffe was the most expensive in Western Australia costing about £20,000 a mile as it cut its way around hills and across bridges. Check out http://www.pemtram.com.au or tel: (08) 9776 1322 for tickets and booking arrangements.

Beedelup National Park
Located 20 km west of the town on the Vasse Highway is the Beedelup National Park with the Beedelup Falls, a rocky cascade which is particularly dramatic after rain, and the Walk Through Tree, a 75 m, 400 year old karri which has a hole which visitors can walk through. The hole took ten hours to cut by chainsaw. The falls are part of the Karri Forest Explorer route. There is good signage at the car park which explains: "Beedelup Falls is an attraction on the 86 km Karri Forest Explorer. You can join the drive anywhere along the route... Follow the path through lush undergrowth to view the spectacular Beedelup Falls which cascade 100 metres down steep granite rocks."

The Bibbulmun Track
The Bibbulmun Track, which starts in Kalamunda in the north, goes for more than 1,000 km south to Albany, passes through Pemberton and goes south to Northcliffe. It can be entered at the Gloucester Tree and if you head south there are a number of access points (see https://www.bibbulmuntrack.org.au/trip-planner/track-sections/pemberton) on the way to Northcliffe. This is a point on the route where, as the guide points out: "The walk from Pemberton to Northcliffe is well known for pleasant walking through the karri forest. A shorter walk between these towns (three days, two nights), it is the perfect section for a quick getaway. It boasts the famous Gloucester Tree which is well worth a climb - but take off your pack before you climb the 61 metres to the top. The Warren campsite is nestled in the karri forest whilst Schafer campsite. named after Geoff Schafer, is on the banks of a welcome swimming hole."  The walk is particularly impressive in spring when wild orchids are in bloom.

Munda Biddi Cycle Track
The Munda Biddi Cycle Track runs from Mundaring, north east of Perth, to Albany on the south Coast. The sign at Pemberton explains: "The Munda Biddi Cycle Track (which means "path through the forest" in the local Noongar language) is Western Australia's only long distance off-road cycle trail. From Mundaring the trail meanders south through the rolling hills of the Darling Range, along scenic river valleys and through magnificent eucalypt forests. Once past the tall timber country the trail traverses the Walpole Wildeerson and some of the wild and stunning southern beaches, before finally reaching the historic port town of Albany ... The Munda Biddi is made up of bush tracks, firebreaks and old railway formations so most of your trip will be on gentle grades, although there are a few challenging sections as the trail enters and exits the river valleys. Encounter native plants and animals not found anywhere else in the world. Immerse yourself in the beauty of the bush as the wonders of South Western Australian landscape are revealed along your journey." For more detailed information check out https://www.mundabiddi.org.au/home.

Brockman's Sawpit
Located on Rowes Road, 16 km south of Pemberton, the Brockman's Sawpit is listed by the Western Australia Heritage Council which notes that "This sawpit is thought to have been built by the Brockman family, who were the first settlers in the Pemberton district. Edward Revely Brockman took up land on the banks the Warren River in the early 1860s. He married Capel Bussell in 1861 and they had nine children … This sawpit is one of the best preserved of the many which remain in the bush nearby. It is thought that it was probably dug by convicts in about 1865 to provide timber for the construction of the Brockman homestead and outbuildings, which is located approx 5 km north west of the sawpit. In 1972 forest workers discovered the pit, the logs and the sawn flinches in the scrub. The timber had weathered really well, and marks from saws and axes were clearly visible. The sawpit was then reassembled by DEC to give insight into an important period of forestry history. It has been interpreted for tourist purposes. It pays tribute to the back breaking labour of the pit sawyers who worked so hard to help with the settlement of the district.
"How the sawpit worked was: Trees were felled with axes and crosscut saws. They were then trimmed, the top was cut off, and then the logs were dragged to the sawpit by horse and bullock team. A log was then rolled onto bearers spanning the pit, and was secured with wooden chocks. Two men operated the saw. One standing or lying in the pit pulled down, cutting the log, while the man on top pulled the saw back up, aligning it for the next cut. The bottom man suffered extreme hardship, often working in mud and water, and being constantly showered with sawdust. This could be the origin of the term Top Dog and Bottom Dog." For more details check out http://inherit.stateheritage.wa.gov.au/Public/Inventory/Details/5bdba7f1-4e40-4fc1-b8f4-83f0a9356d06. It has been restored so that visitors can get some idea of how difficult it must have been to saw the giant karri logs in the mid-nineteenth century.

Fishing
The area around Pemberton is noted both for its rainbow trout which have been introduced (over 1 million are released into the local rivers annually) and its marron, a species of freshwater crayfish which is the third largest in the world. Old Vasse Trout and Marron Farm, 7 km south of Pemberton at 522 Pemberton-Northcliffe Road, Yeagarup, is open from 11.00 am - 4.00 pm on Saturday and Sunday and offers the opportunity to catch your own rainbow trout. Check out https://oldvassetroutandmarronfarm.com.au (08) 9776 1726 for details.

* Prior to the arrival of Europeans, the area around Pemberton was home to Noongar people from the Bibbulman language group.

* The first European to settle near Pemberton was Edward Brockman who arrived in the area in 1861.

* The town was named after Pemberton Walcott who arrived in the area in 1862 and departed two years later.

* The village was founded in 1911 and proclaimed a town the following year.

* The local Bibbulman people moved to Busselton around 1912.

* A sawmill was established in 1913. It had an order to supply half a million railway sleepers for the Trans-Australian Railway. This led to the creation of a mill town.

* In 1921 the town was part of the post-World War I Group Settlement Scheme. Although it was not successful many of the settlers stayed on in the district.

* By 1939 the Pemberton Mill was the largest timber mill in Australia.

*The government attempted a second settlement of the area with returned soldiers after World War II.

* By the 1980s Pemberton had become a popular tourist town.

* In the early 2000s the government slowed timber cutting in old growth forests but the area started growing plantations of pine and Tasmanian blue gum.

There is a useful local website. Check out https://www.pembertonvisitor.com.au. 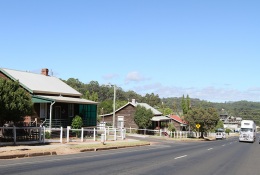 The main street through Pemberton 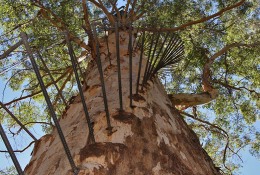 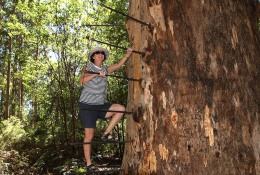 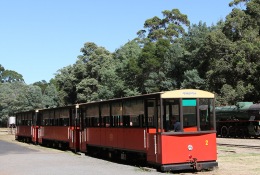 The Pemberton to Northcliffe Railway yards 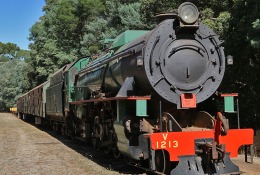 Rollling stock at the Pemberton to Northcliffe Railway 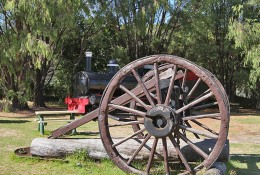 Part of the exhibits at the Pioneer Timber Museum 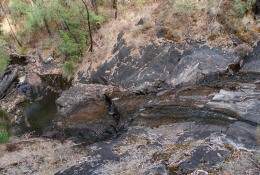 The Beedelup Falls are just a trickle without recent rains 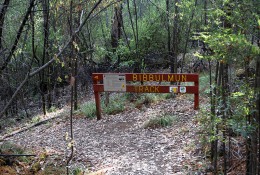 A section of the 1000 km long Bibbulmun Track near Pemberton 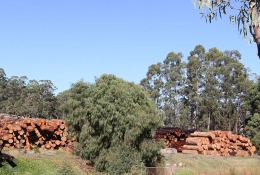 Timber is still a vital part of the local economy

The Munda Biddi Trail near the Gloucester Tree