Penguin is a delightful seaside town on the Tasmanian north coast with a finely honed sense of humour about its name. It has a quiet, serene charm which is a common feature of the coastal towns between Launceston and Stanley. Apart from the very beautiful Uniting Church on the beachfront, it is a celebration of the fairy penguins (sometimes called little penguins) which inhabit the beaches on either side of the town.

Penguin, which lies on the north coast between Burnie and Devonport, is located 131 km north-west of Launceston via Deloraine, 17 km east of Burnie and 32 km west of Devonport.

No prizes for guessing how Penguin got its name. The noted botanist, Robert Campbell Gunn, observing the large numbers of fairy (little) penguins along the coast decided that the name was appropriate. He named the settlement in 1861.

Penguins Everywhere
If the town's name is Penguin then just about everything, particularly along the sea shore, should be a celebration of penguins. Consequently there is the Big Penguin, community rubbish bins with penguins on them and even the Penguin branch of Meals on Wheels has a penguin on the side of the building. The main attraction is the little penguins (Eudyptula minor) which can be seen arriving each evening between November and March. Contact the local visitor information office on (03) 6437 1421 for details of where and how to see them.

Penguin Heritage Trail
There is an outstanding website (check out http://penguinheritagetrail.com.au) which has detailed information on 26 places of historic interest in the district. Check it out. It has photos and detailed descriptions of all the places of interest.

The Big Penguin
The idea of constructing a 3.15 metre Big Penguin was the brainchild of George Daniels, the President of the Penguin Traders Association. The idea was to erect the Big Penguin in 1975 as part of the town's centenary celebrations. A problem arose when the penguin could not be delivered by the Hobart firm which had won the contract. Amazingly a Devonport designer, R.M. Foster, stepped in and created a prototype which was based on a picture of a penguin in one of Mr Daniel's daughter's storybooks. The Goliath Cement Company at Railton built the penguin out of ferrocement and installed it in three days. It was later coated with fibre glass and the result has become one of Tasmania's most photographed tourist attractions.

Penguin Uniting Church and St Stephens Anglican Church
The two churches - Penguin Uniting Church and St Stephens Anglican Church - both located over the road from the beach make for an attractive seafront. The Uniting Church is a beautiful old timber church with tasteful decorative flourishes. It was completed in 1903. The spire is approximately 16 metres high and the church can seat 400 people downstairs and 100 people upstairs. There is a staircase in the square tower.
St Stephens Anglican Church was built on land given by Alexander Clerke in 1874. The first service was held in 1875 and around 1900 it was enlarged to its present size. It was re-roofed with shingles in 1973. Its construction - a bluestone base and timber with a shingle roof and bellcote - is a clever use of the materials available locally in the 1870s. It is a simple church with nothing more than a nave, chancel and vestry.

Dutch Windmill
There is a replica Dutch windmill (it is 1/3 the size of a Wipmolen windmill) in Hiscutt Park which was presented to the citizens of Penguin to commemorate the Dutch settlers in Penguin and the Dutch explorers, notably Abel Tasman, who were the first Europeans to make contact with Van Diemen's Land. A plaque explains: "On behalf of the Dutch settlers of Penguin on the first day of October 1988 as a gift in the Australian Bicentennial Year. The Mill is dedicated to the memory of Janneti Tjaers who was the wife of Abel Tasman." On the side of the windmill it has "This windmill is a Bicentennial Gift from the Dutch community to the people of Penguin in appreciation of the warm welcome extended to those migrants who settled here. 2 January 1988." The waterwheel was added in 1993. Hiscutt Park is an ideal place for a picnic. It has play equipment for children and in spring there is a spectacular tulip display to complement the windmill. In recent times it has been allowed to deteriorate.

The Penguin Market
Held each Sunday the Penguin Market is the largest permanent undercover market, a subtle comment on the unreliability of Tasmanian weather, on the island. It has over 200 stalls and draws people from along the coast. Check out http://www.thepenguinmarket.com/ for more details.

Penguin Tours
Between September and March the penguins appear and nest in the area. There are penguin tours. If you do not want to go on a tour you can drive out to Penguin Point and, at dusk, watch the penguins make their way up the beach to their nests.

Walking in the Area
There are a number of excellent walks in the area. One of the most impressive - through forests of particularly beautiful ferns and beside creeks - is at Ferndale Gorge State Reserve which lies 6 km south of Penguin. Drive south on Ironcliffe Road. The Ferndale Walk is only 30 minutes (each way) and includes a hole in the ground known as Thorsby's Tunnel. It is an old silver mining shaft. Other walks include - Tall Trees Walk (45 minutes), Leven River (1 hour),  the trail up the Dial Range to Mount Montgomery (2 hours) and Mount Gnomon (2 hours)  Details of the walks are available from the Penguin Visitor Information Centre and the website http://www.think-tasmania.com/ferndene/ has lots of photographs and instructions for the Ferndale walk.

* the first Europeans to sight the coastline around Penguin were Bass and Flinders.

* In the 1820s Joseph Fossey, an assistant surveyor with the Van Diemen's Land Company, travelled through the district and named the Dial Range which rises behind the town.

* By the 1850s timber cutters, realising there was a huge demand for timber palings on the Victorian goldfields, arrived in the area and Penguin became a port shipping timber across Bass Strait to Melbourne.

* In 1861 Edward Beecraft became the first permanent European settler in the area.

* In 1870 the famous miner and prospector Philosopher Smith discovered silver-lead and iron ore near the town but the deposits were not sufficient, and the land was very wet, and this prevented a mining boom.

* In 1901 the railway arrived. This led to a reduction in sea trade along the coast and consequently Penguin's importance as a transport hub declined. 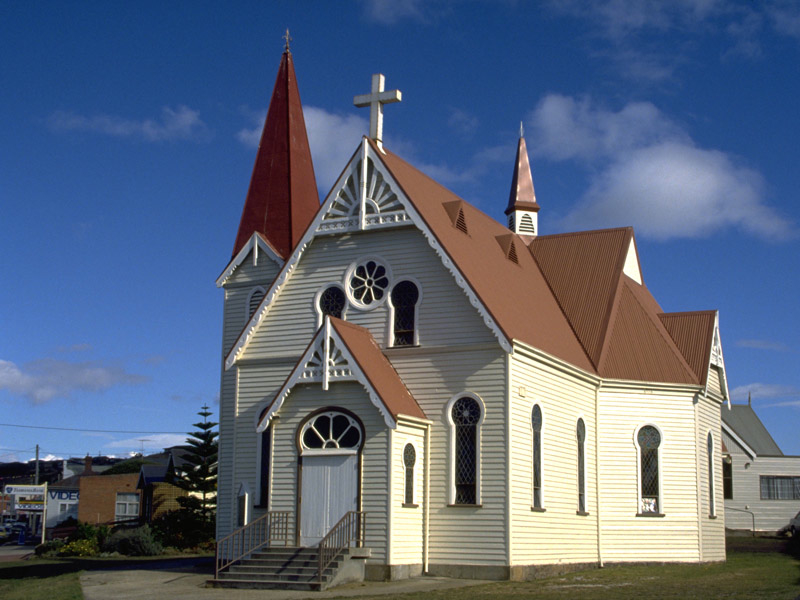 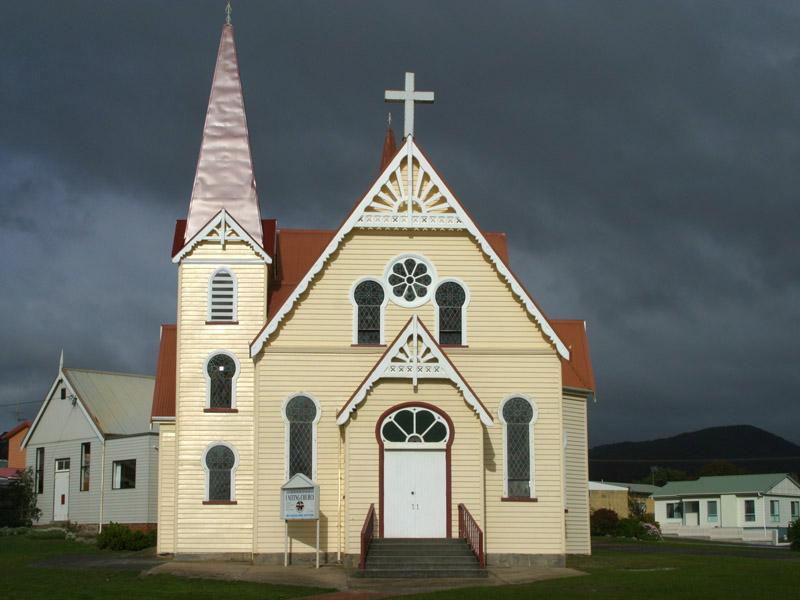 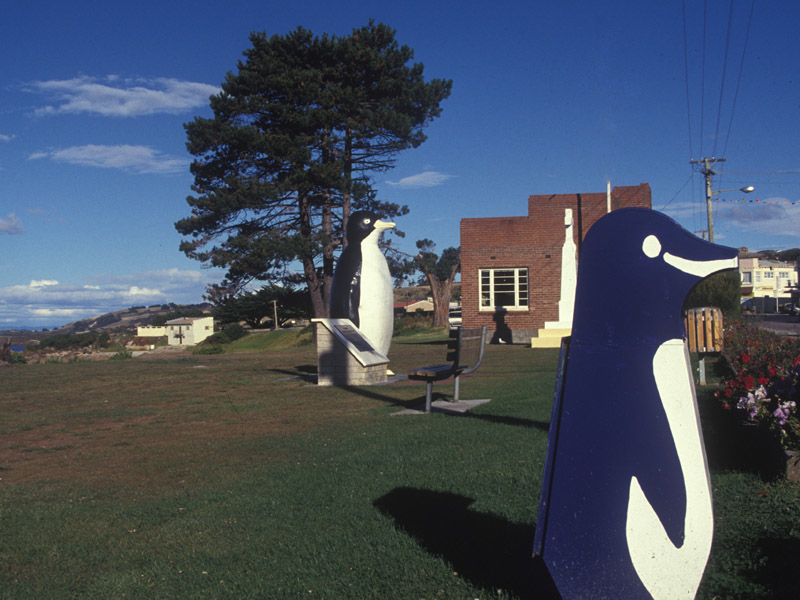