Town on the eastern edge of the Nullarbor famed for its windmills.

The township of Penong is a small wheatbelt settlement on the western edge of South Australia's wheatbelt which is characterised by dozens of windmills which pump the local water supply from a large underground basin, the Anjutabie water Basin. The town and the surrounding district is so dry that the underground water is supplemented by rain water and water which is carted by truck from a reticulated water supply connected to the Tod River pipeline some 15 kilometres east of Penong.

It is generally accepted that "penong" is a corruption of a Wirangu Aboriginal word probably meaning "rock hole".

Hole 3:  The Windmills Par 4 and is 260 metres.
Around the back of the town, behind the roadhouse, is a display of windmills of different shapes and sizes. Next to the windmills, clearly marked, is the interesting hole which is characterised by an excess of trees. This is the first of the really challenging holes.

Robbie’s Guide to the Nullarbor Links
Penong - Windmills
"A short Par 4 – reachable from the tee if fortune favours you, as the hole is very well protected on all sides by scrub and trees. The safe option might be to play to the short left, leaving 100m over the trees to the green, but there is still danger on approach and only an accurate or lucky shot is rewarded."
The notes on the hole record: "In the 1860s a number of pastoral leases were issued in the Penong area. Around the 1890s these leases were resumed by the Government and the land was surveyed into hundreds. Penong is in the hundred of Burgoyne which was proclaimed in the Government Gazette in April 1892. The name Penong is believed to mean "Rock Hole". Many pioneers of the Penong district took up land in the 1890s. Those early families are recognised in the naming of town streets and also in Pioneer Park. Early pioneers included the Murray, Saunders, Edwards, Oats, Shipard, Weber, Leopold and the Sleep families. The land they came to was virgin scrub, local stone was used to construct their homes. Life was very hard for these early pioneers, making do with nothing and showing their resourcefulness." The tee is named Pioneer Drive.

The Penong Windmills
Driving in the Penong the visitor is overwhelmed by the windmills. There are literally dozens of windmills scattered across the landscape. They pump water from the Anjutabie water Basin. This water is supplemented by the use of rain water and water is also carted by truck from a reticulated water supply connected to the Tod River pipeline some 15 kilometres east of Penong. This really is marginal land - although it is productive in good seasons with a wheat harvest filling the local silos. The annual average rainfall is around 300 mm.

Cactus Beach
Located 20 km on an unsealed road south of Penong is Cactus Beach which has a reputation as one of the best surfing beaches in Australia with 2 world class left hand breaks named "Cactus" and "Castles", and a right hand break known as "Caves". It is strictly for serious surfers and people who are "crazy brave" as the area is known for its significant numbers of great white sharks. Reputedly it was originally known as Point Sinclair until some surfer, incapable of recognising its superb potential, described the surf as "this place is cactus". How wrong he was. Cactus is now regarded as one of the best breaks in the world. It was recognised as a National Surfing Reserve in 2013 and there has been a pamphlet distributed which explicitly claims: "The National Surfing Reserve Charter prohibits the following within the reserve: surf contests, jet skis, commercial photography, and publishing still or moving images on any format including the internet." They want to keep it strictly for dedicated surfers. Point Sinclair, which Matthew Flinders named after his midshipman Kennet Sinclair in 1802, is a 502 ha area of coastline known for its surfing, fishing and camping and its dramatic cliffs, blowholes and huge sand dunes.

Lake McDonnell
Located 13 km south of Penong is Lake MacDonnell is known to have the largest deposits of gypsum in Australia with estimated reserves in excess of 500 million tonnes. The gypsum, which is now railed to Thevenard, has been mined since 1919. In the early days it was shipped from a jetty at Port Le Hunte. The gypsum, which is used both as a fertiliser and in the building trade, has been laid down to a depth of 4.8 metres. It is estimated that the gypsum, which is used for fertiliser and in the building trade, covers an area of 87 square kilometres (8,700 ha) and that the yield is around 100,000 tonnes of salt which is harvested from the lake's brine pools.

* Prior to the arrival of Europeans the area around Penong was home to the Wirangu Aboriginal people.

* The first Europeans to observe the coastline near Penong were the Dutch sailors who accompanied Pieter Nuyts in his 1627 voyage across the Great Australian Bight. Nuyts reached the islands off the coast which are now known as Nuyts Archipelago before turning west to head for Batavia.

* It is claimed that Jonathan Swift, hearing of the discovery and learning of a Dutch plan to settle the area, used the islands of the Nuyts Archipelago as the models for the lands of Lilliput and Blefescu in Gullivers Travels.

* In 1802 Matthew Flinders, circumnavigating Australia in the Investigator sailed down the coast of Eyre Peninsula naming prominent landmarks, bays and harbours as he went.

* Later in 1802 the French explorer Nicholas Baudin sailed up the coast.

* In 1839 John Hill and Samuel Stephens explored the area but told Governor Gawler in Adelaide that it was waterless although the bay was valuable.

* The area was settled in the late nineteenth century.

* The town developed with the arrival of the railway line in 1915.

* By 1919 Lake MacDonnell was being mined for gypsum. Lake MacDonnell is known to have the largest deposits of gypsum in Australia with estimated reserves in excess of 500 million tonnes.

There is no official visitor centre but The Woolshed, on the western outskirts of town, and the Penong General Store and Post Office will help with enquiries.

The most complete information on the town can be accessed at http://www.nullarbornet.com.au/towns/penong.html. 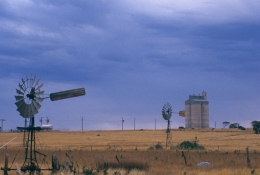 Windmills and grain silos at Penong. 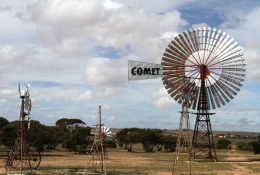 The windmill display behind the roadhouse. 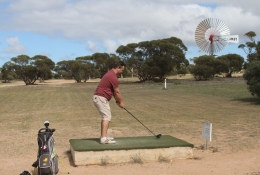 Teeing off on the Windmills hole at Penong. 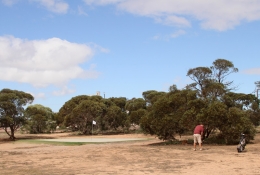 The second shot is over the trees.

The green is made of astroturf and dusted with sand.