Historic town, now an outer suburb of Sydney, on the Nepean River

Penrith, a city within Greater Sydney, is located on the edge of the Sydney Basin and is now effectively an outer western suburb of the city. It lies adjacent to the Nepean River, famous for the Head of the River boat races, and is the home of the Museum of Fire (an impressive museum of fire engines) and the Penrith Panthers Rugby League Club, a huge entertainment venue.

Penrith is located 56 km from Sydney's CBD via the M4. It is 30 metres above sea level and located at the edge of the Sydney Basin before the Lapstone Monocline rises to the Blue Mountains.

The area was named by Governor Lachlan Macquarie after the town of Penrith in Cumbria, England. The word 'penrith' actually means 'head ford' or 'chief ford' which is particularly appropriate as it was the main crossing point on the Nepean River.

Museum of Fire
The Museum of Fire, located at 1 Museum Drive off Castlereagh Road, reputedly has one of the largest fire collections in the world. It has historic fire engines dating from the late 18th century up to the 1980s. As well there are historic uniforms, phones and radio and alarm systems, fire fighting tools and protective equipment. The museum caters for children with a children's play area, a ride-on fire-engine and interactive computer games. It is open seven days from 9.30 am - 4.30 pm. Tel: (02) 4731 3000 or check out https://www.museumoffire.com.au.

Nepean River - Great River Walk
The Great River Walk is a 7 km walking track linking the bridges at Penrith and Emu Plains. The walk is essentially a pleasant stroll with a large number of rest points and lookouts and an opportunity to observe the birdlife along the river. The walk passes through Regatta Park and Tench Reserve which both have playgrounds. There are cafes along the way, notably the Café at Lewers at Penrith Regional Gallery, the Penrith Rowing Club and The Coffee Club. The walk takes around an hour.

Nepean Belle
The Nepean Bell Paddlewheeler cruises depart from Tench Reserve for a leisurely cruise along the Nepean River. It is an opportunity to see both the river and the Nepean Gorge from a cruise vessel while relaxing with a Devonshire tea, a lunch or dinner.  For more details tel: (02) 4733 1274 or check out http://www.nepeanbelle.com.au. The cruises are at noon and 7.00 pm and while always on Saturdays and Sundays vary according to days during the week. Check http://www.nepeanbelle.com.au/book-online for dates and times.

St Stephen the Martyr Anglican Church
Located in the High Street, St Stephen the Martyr Church is heritage listed. The foundation stone was laid in 1837 and it is recognised as the 14th oldest church in Australia. The Penrith City Local History notes of the church: "A Local Landmark: The northwest corner of the Church’s thirteen metre tower was made Penrith’s trigonometric point and the tower became a landmark for travellers in the early days.
"The Fabric: Built in local sun-dried brick, the exterior of the church began to crumble and was cement-rendered in 1906, both inside and out. Restoration and repairs have remained an on-going necessity.
"The Interior: Originally, the pew settings were box type, rented as was the custom of the time, by various families. The box pews were removed and open long pews installed in the 1860’s. In 1952 the present arrangement of a centre aisle was effected. The bell, said to have been cast on the site, is dated 1838 and is still in use.
"The Windows: The eastern window demonstrates the style produced in the 1870’s in N.S.W. and later ones present as pictures – those in the vestry depict the marriage in Cana and the 4 in the northern porch have caused it to be known as the Apostles’ Porch." For more information check out https://penrithhistory.com/buildings/churches/st-stephen-the-martyr.

Penrith Whitewater Stadium
Located off McCarthys Lane at Cranebrook, the Penrith Whitewater Stadium was the competition venue for the canoe/kayak slalom events during the Sydney 2000 Olympic Games. An artificial river it was constructed using a combination of both natural and artificial materials to recreate the characteristics of a wild river. When operational some 14,000 litres per second of water (much of it simulating whitewater conditions) flows over a moveable obstacle course. The result is an exciting, challenging ride through rapids. It is operational from September to June and visitors can sign up for guided whitewater rafting, self-guided whitewater rafting, whitewater kayaking and kayak instruction. Visitors should check http://www.penrithwhitewater.com.au for times when the water is running, costs and bookings. Tel: (02) 4730 4333.

Sydney International Regatta Centre
Located on Old Castlereagh Road, Cranebrook, the Sydney International Regatta Centre was built for the 2000 Sydney Olympics and used for rowing and sprint kayaking. It is set on 178 ha with scenic views of the Blue Mountains and Penrith Lakes. Apart from the numerous events which occur at the Centre, there is a delightful 5 km walking and cycling track around the main lake. It is ideal for walking, running, cycling, lakeside BBQs, fishing and there is the Lakeside Restaurant. The Centre is open from 6.30 am - 6.30 pm on event-free days. Check out https://regattacentre.nsw.gov.au for more details. Tel: (02) 4730 0000.

Head of the River
Officially called the "Athletic Association of the Great Public Schools of New South Wales - Head of the River", this rowing competition started on the Parramatta River in 1893, moved to the Nepean River in 1936 and transferred to the Sydney International Rowing Centre in 1995. It is a race over one and a half miles and is held each March.

Sun Masamune Sake Brewery
Located at 29 Cassola Place, the Sun Masamune Sake Brewery is Australia’s only sake brewery. The Go-Shu website explains: "Tours include an interesting explanation of the sake making, its long history, culture and tradition as well as a look inside the workings of the sake brewery. Tastings of the freshest and finest products are also included in the tour. Bookings are essential. Brewery tours explore all facets of the unique brewery." Open 10.00 am - 4.00 pm weekdays. For more information about tours and the products, check out http://sun-masamune.com.au or tel: (02) 4732 2833.

Penrith Heritage Drive
There is a downloadable brochure (check out https://www.visitpenrith.com.au/images/documents/Heritage-Drive-2015.pdf) which lists a total of 27 places of historic interest around Penrith. It starts at the Explorers' Memorial Cairn on Luddenham Road at Orchard Hill and ends at Blaxland Crossing on Silverdale Road at Wallacia. A printed map is available at the Penrith Civic Centre, Penrith Library or St Marys Library.
The drive includes - Mamre Homestead, St Mary Magdalene Church, Bronte House, St Stephen the Martyr Church, the Museum of Fire, Thornton, Penrith Weir, the Arms of Australia Inn, Melrose Hall, Glenmore, St Thomas Church at Mulgoa and Blaxland Crossing.

Arms of Australia Inn
The first section of the Arms of Australia Inn was built in 1826 making it one of the oldest, if not the oldest, buildings in Emu Plains. Located on the old Great Western Highway (the main route to the Blue Mountains and Bathurst in the 19th century) at Emu Plains, most of the inn is thought to have been completed as early as 1833 although the first licence was granted to John Mortimer in 1841. Not surprisingly it was a popular stopover and staging post for travellers before they began to climb into the Blue Mountains or travelled to Bathurst during the goldrush era. It was an important Cobb & Co stopping point and was used by travellers when the Nepean River was in flood. It is now a Museum with an extensive collection of local memorabilia. Agricultural equipment, early farmhouse paraphernalia, old grindstones, hand washing mangles, wood stoves, ice boxes, a blacksmith’s forge and general early farm equipment are on display. It is open Mondays, Wednesdays and Thursdays from 9.00 am - 2.00 pm and on the first and third Sundays from 1.00 pm - 5.00 pm and is located at the corner of the Great Western Highway and Gardenia Ave, tel: (02) 4735 4394. For more information check out http://www.nepeanhistoricalsociety.org.au.

* Prior to the arrival of Europeans the area was home to the Dharuk Aborigines who had lived beside the Nepean River for at least 40,000 years.

* Watkin Tench, a Marine Captain, explored and discovered the Nepean River in June 1789. On the basis of his expedition convicts were sent to the area.

* Land in the area was granted by Governor King in 1804. The first grant was 1,000 acres to Captain Daniel Woodriff.

* On 11 May 1813 Gregory Blaxland recorded that the expedition trying to cross the Blue Mountains had 'crossed the Nepean River at the ford on to Emu Island at four o'clock in the afternoon and proceeded by their calculations two miles through forest land and good grass'.

* In 1819, that Governor Lachlan Macquarie established a farm in the area.

* In 1850 St Nicholas of Myra Catholic Church was consecrated.

* The first bridge across the Nepean River was completed in 1856.

* In 1909 Penrith Weir was built to provide the town with a permanent water supply.

* The City of Penrith came into existence in 1959.

* In 1990 the Joan Sutherland Performing Arts Complex was opened.

* The Sydney International Regatta Centre was opened for the Sydney 2000 Olympics. 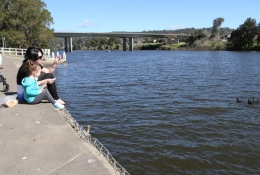 Feeding the ducks beside the Nepean River 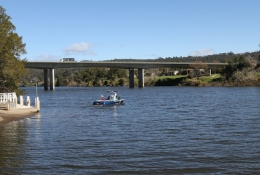 Boating on the Nepean River near the bridge to the Blue Mountains. 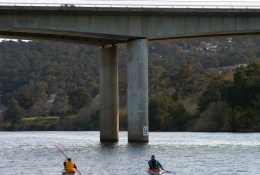 Canoeing under the Great Western Highway on the Nepean River. 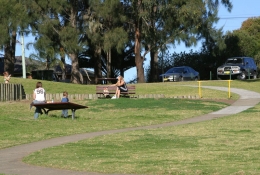 The cycleway-footpath in Tench Reserve beside the Nepean River. 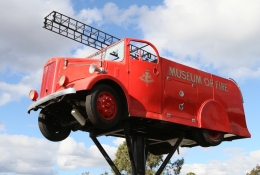 The fire truck at the entrance to the Museum of Fire. 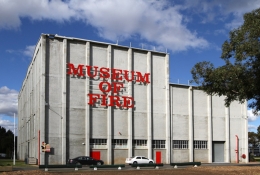 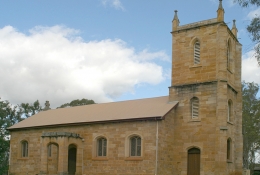 St Thomas Church, Mulgoa on the Heritage Drive around Penrith