Perenjori is a typical wheatbelt towns with wheat silos, a railway line, a caravan park and hotel with motel–style accommodation. Its primary appeal is that it has a genuinely attractive main street with large stands of gum trees, it has one of Monsignor Hawes’ churches, it has an interesting local folk Museum and, 68 km to the east, there is the fascinating gold mining ghost town of Rothsay.

Perenjori is located 383 km north of Perth via National Highway 95.

Perenjori probably gets its name from a corruption of the Aboriginal word ‘perangery’ or perengory' which reputedly meant either "a waterhole" or the Peranj-jiddee bush (it is like a black wattle) which surrounded the waterhole.

Church of St Joseph
Perenjori is the site of a church built by the famous Western Australian architect–priest Monsignor John Hawes. Located on the Carnamah Road at the western end of town, the church has a sign outside which explains its history: "Built in 1937 the Church of St Joseph was designed while John Hawes was also working on plans for two other parish churches, supervising construction of Northampton’s St Mary in Ara Coeli, and travelling long distances on horseback as an active parish priest. Stark, utilitarian and much less a blend of architectural styles as was most of his work, its design was strongly influenced by Father Benedict Williamson’s book How to Build a Church. In the church’s interior, the huge stone baldachino (canopy) above the high altar which is supported by two massive columns looks very similar to one of the illustrations. Another noteworthy internal feature is the baldachino’s fascia which has a frieze carved by Hawes depicting Christ and the twelve apostles. The structurally supportive metal braces in the nave roof were insisted upon by the Public Works Department but not without serious opposition by John Hawes. Hampered by lack of funds the planned belltower was never added reinforcing the building’s functional appearance.

The Buildings of Monsignor John Hawes
Perenjori, as well as Carnarvon, Geraldton, Kojarena, Northampton, Mullewa, Tardun, Morawa, Yalgoo, Wiluna and Nanson, has religious buildings designed (and often built) by the famous Western Australian architect-priest Monsignor John Hawes. Between 1915-1939 Hawes designed a large number of churches and church buildings in the Central West and along the coast.
For more information check out the excellent https://www.monsignorhawes.com dedicated to the work of Monsignor Hawes.
There is also the very detailed Monsignor Hawes Heritage Trail which includes a map and a total of eleven places of interest. Check it out at https://www.visitgeraldton.com.au/Profiles/visitgeraldton/Assets/ClientData/Monsignor_Hawes_Heritage_Trail.pdf.

Perenjori-Rothsay Heritage Trail
Created in 1988 as part of the Bicentennial program, the Perenjori-Rothsay Heritage Trail is a 180 km round trip which includes the Perenjori Museum (originally the Bank of NSW building) and the John Forrest Lookout (survey point used by John Forrest), the Rothsay townsite, the rabbit–proof fence road to the Camel Soak and the Mungar’s Lake Lookout which overlooks a large salt lake.
The trail passes through the rich wheat growing area around Perenjori and moves east across uncleared shrub and salt lakes to the station country around Rothsay. Fauna that is native to the area such as galahs, emus, lizards and small marsupials can be seen as well as stands of native flora especially the everlastings and the wreath flowers.
There is an excellent downloadable map at http://www.perenjori.wa.gov.au/wp-content/uploads/2013/02/2012-06-26-Shire-map-for-website.jpg. Most of the Trail is on unsealed roads. Sadly the brochure is no longer available so here is a detailed account of the Heritage Trail's major attractions:

Perenjori Museum
Located on the main street (Fowler Street) the Pioneer Museum is located in a bank building dating from 1929. It was established as a museum in 1987 by the Perenjori Museum Committee with the rooms in the manager's residence being furnished with memorabilia from the districts' past. It has a range of historical farm machinery, ploughs, binders, seeders, trucks as well as an impressive mural depicting the agricultural history of the area. It is open from July to October from 9.00 am - 5.00 pm.

John Forrest Lookout
Located to the east of the town via the Perenjori-Rothsay Road, the John Forrest Lookout was discovered and named in 1869 when Forrest was looking for Ludwig Leichhardt. It was established as a survey point in 1897 and offers a superb 360° panoramic view of the surrounding countryside.

Rothsay
Rothsay, which lies approximately halfway between Perenjori and Paynes Find, is a true gold mining ghost town. At its height, from the discovery of gold in 1894 to the closing down of the mine in 1902, over 90,000 ounces of gold were extracted from the region. Today all that is left are some deserted buildings including the mine manager’s house and strong room, the foundations of the gold battery and some derelict shafts.

No. 2 Rabbit Proof Fence (Vermin Proof Fence)
Located 37 km east of Perenjori the Vermin Proof Fence runs from north to south across the Perenjori-Rothsay Road. Now focusing on wild dogs and emus more than rabbits, the signs say there are cameras, there are fines and there are poison baits. It is regularly patrolled and well maintained.
There were three Rabbit Proof Fences in Western Australia and one, famously, was used as a guideline for three young Aboriginal girls in the 1930s who walked the length of the fence to make their way back to their families. To see sections of the fence, ask in the town and to understand its significance see Phil Noyce's 2002 film Rabbit-Proof Fence or read Doris Pilkington Garimara's book Follow the Rabbit-Proof Fence upon which the film was based. For more information on the fence check out https://www.agric.wa.gov.au/invasive-species/state-barrier-fence-overview.

Camel Soak
The unusual Camel Soak is located 47 km east of Perenjori, off the Perenjori-Rothsay Road. It is a granite water catchment which was sunk to provide water for the men and their camels who were building the Rabbit Proof Fence (1903-1905). Today it is a popular picnic destination. The water attracts kangaroos and emus and there are impressive orchids at the base of the rock.

Wildflowers
Perenjori comes alive with spectacular displays of wildflowers between July and October. The area is notable for its carpets of pink, white and yellow everlastings, the unique and distinctive Wreath Flower (Leschenaultia macrantha) and  its impressive stands of wattle. For more information download http://www.perenjori.wa.gov.au/wp-content/uploads/2013/02/Perenjori-Brochure.pdf.

* Prior to the arrival of Europeans the area was home to people from the Kalaamaya Aboriginal language group.

* The Perenjori area was first explored by John Forrest in 1869.

* Gold was discovered by George Woodley at Rothsay in 1894 and this led to settlement of the district.

* In 1905 Dan Woodall became the first European settler in the district. He was employed to manage Perangery Station.

* In 1906 Matt Farrell, a local carrier, took up land in the district.

* The first crops were grown around 1911. They were planted and harvested by hand.

* In 1913 a railway siding was built on the Wongan Hills to Mullewa railway line.

* The arrival of the railway in 1915, and improved cropping methods, eventually saw the district prosper.

* Perenjori officially became a town in 1916.

* The mine was re–opened in 1935 by an entrepreneur named Claude de Bernales but it closed again in 1939. All that is left now are some deserted buildings including the mine manager’s house and strongroom, the foundations of the gold battery and the lonely graves of some of the miners who died in this isolated settlement.

* By 2011 the town had a major loading facility for iron ore which was hauled from Mount Gibson.

There is a wonderfully comprehensive brochure which can be downloaded at http://www.perenjori.wa.gov.au/wp-content/uploads/2013/02/Perenjori-Brochure.pdf, It is part of the local shire's website. 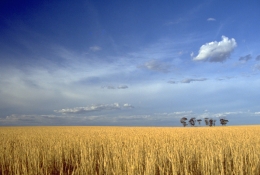 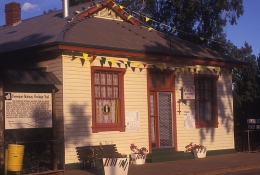 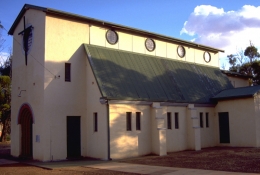