The Perisher Valley area of the Snowy Mountains ski fields consists of four definable ski areas - Perisher Valley, Smiggin Holes, Blue Cow and Guthega. Combined they make up the largest ski resort in the country. The statistics are impressive. There are 50 ski lifts and 1,245 ha of skiable slopes. Perisher has more than 60 lodges and the world of modern skiing - superpipes, half pipes, terrain parks, rail parks as well as a Snow Tube park and night skiing - make it a desirable destination. At the southern end of the valley is Charlotte Pass: Australia’s first ski resort and still the highest. It has a pleasant air of exclusivity. In winter it is only accessible aboard a Snow Cat from the Perisher Valley Skitube Terminal and there are only 12 club lodges as well as the Kosciuszko Chalet. While there is excellent hiking in the summer months, this is really a winter skiing and snowboarding destination.

Perisher Valley is located 492 km south west of Sydney via the Hume and Monaro Highways. It is 95 km west of Cooma and 40 km west of Jindabyne.

No one knows exactly who named Perisher Valley but local mythology suggests that it was during a particularly harsh winter when someone observed that it was "perishingly cold". One source claims that James Spencer, who had settled in the area in the 1840s, was caught in a snow storm and observed "What a perisher."

Skiing at Perisher
In winter the Perisher area has 50 ski lifts and 1,245 ha of skiable slopes. The settlement boasts the two highest churches in Australia and a ski lift which rises to 2054 metres which is only 174 metres below Mount Kosciusko. The website explains: "Perisher Valley has a large range of areas for beginner and intermediate skiers but also happily accommodates our advanced guests. With extra snow activities such as marked cross country trails, night skiing two nights a week throughout the season and Tube Town for extra fun." You will find detailed information at https://www.perisher.com.au/plan-your-trip/new-to-perisher/explore-perisher/perisher-valley.

The Skitube
Perisher's Skitube, designed as a rack-rail train in Switzerland, runs from below the snowline at Bullocks Flat, across the Thredbo River Bridge and through the mountains to Perisher Valley and Blue Cow. It is Australia's highest rack railway system and traverses 8.5 km through the longest railway tunnel (a total of 6.3 km) in the country. Bullocks Flat terminal, which has free day and overnight parking, is 1120 metres above sea level and the terminal at Mount Blue Cow is at 1875 metres - a total climb of 755 metres. It operates all year round and, for visitors in summer, offers an interesting journey as well as an ideal start on the climb up Mount Kosciusko. There is a bus service which runs from Perisher Valley to Charlottes Pass from where it is an easy 8 km walk to the top of Mount Kosciusko. In spring and summer the walks in the area are exhilarating. The alpine flowers are dramatic and the views are spectacular. The Skitube Terminal has both an Information Desk and a Snowsports Hire and Ski & Board Service Centre where equipment can be hired. There is a very detailed website. Check out https://www.perisher.com.au/plan-your-trip/activities/skitube.

Smiggin Holes
Smiggin Holes (not Smiggins Holes) was named after the pools which were formed in the rocks in the area by cattle. The name is Scottish in origin. It is reputedly the best beginners ski run in Australia and is particularly popular with families. It is more protected than the other ski slopes near Perisher and has a number of accommodation and eating options. Check out https://www.perisher.com.au/plan-your-trip/new-to-perisher/explore-perisher for more details.

Guthega
Located only 40 km from Jindabyne, Guthega was one of the first camps in the Snowy Mountains. As early as 1955 power was being generated by the Guthega Power Station. The area was originally called Munyang after the Reverend William Branwhite Clarke (an early explorer in the region - he was famous as the first person to discover gold in the Bathurst area) had named it after an Aboriginal word which he spelt 'Muniong' and claimed meant "big white mountain" in the Ngarigo Aboriginal language. Guthega currently has 16 ski runs. For more information check out https://www.perisher.com.au/plan-your-trip/new-to-perisher/explore-perisher/guthega.

Blue Cow
Mount Blue Cow, now known simply as Blue Cow, was originally a joint venture between the Mount Blue Cow Ski Bowl company and NSW National Parks and Wildlife. Located between Perisher Valley and Guthega it is 1905 metres above sea level and is only accessible by the Skitube which runs from Bullocks Flat. It has no overnight accommodation and is designed to cater for day skiers in the winter and walkers in the summer months. Blue Cow is an area where 150 year old snow gums still exist and where the alpine water skink and the rare mountain pygmy possum have their home. The Perisher website notes: "Today… Blue Cow includes the facilities of Blue Cow Resort Centre at 1905m and Guthega Ski Centre at 1640m. The highest lifted point on the Blue Cow Side of Perisher is 1960m reached by the Summit Quad Chairlift. The vertical drop to the base of the Ridge at 1605m is 360m. Blue Cow's 14 ski lifts open daily during winter from 8:30 am to 5:00 pm weather permitting. There is also snowmaking over an area serviced by six lifts." It adds, for skiers, "Blue Cow is accessible by the comfort of our Skitube where you can then ski directly out the door and start enjoying all that is on offer. With a great range of Green and Blue runs including Zali's, Pleasant Valley and Roller Coaster, as well as some great Black runs such as Kamikaze and Show Boat, Blue Cow really covers all bases for all ability levels." Check https://www.perisher.com.au/resort-info/know-perisher/our-history for more information.

Charlotte Pass
At 1765 m, Charlotte Pass is recognised as the highest ski field in Australia. In recent years it has become both a popular ski resort and a favourite departure point for the leisurely 8 km walk to the top of Mount Kosciusko. Philip Francis Adams, the District Surveyor at Cooma, brought a group to the area in 1881. He named the area after his daughter Charlotte who accompanied the group. Today it is home to the Kosciuszko Chalet Hotel (1930) known as the "Grand old lady of the mountains". For more information check out http://www.charlottepass.com.au.

* Prior to European settlement the area was home to the Ngarigo Aborigines.

* The first European in the area was James Spencer in the 1840s. He acquired a lease on both Mount Kosciuszko and Mount Blue Cow.

* Early skiers came to Charlotte Pass in 1881. They were brought by Philip Francis Adams who named the pass after his daughter.

* By 1939 skiers were heading to Smiggin Holes. A cafe was opened to cater for skiers around this time.

* By 1947 Rock Creek Hut between Kosciuszko Hotel and The Chalet was built.

* In 1952 Telemark and the Snow Revellers Club were completed. A team of dogs operated between Smiggin Holes and Perisher Valley.

* By 1957 there were a number of ski clubs operating. Edelweiss Lodge was built for Ken Murray's personal use.

* In 1958 Sverre Kaaten built a rope tow at North Perisher. Telephone was connected to Perisher.

* In 1959 the publisher Ken Murray built Perisher's first T-bar and the Sundeck Hotel.

* 1960 saw the construction of the Man from Snowy River Hotel. Electricity reached the valley.

* In 1961 the Mount Perisher double chairs were in operation.

* 1969 saw the first snowmaking trials in the valley.

* In 1972 Ken Murray sold to Australian Consolidated Press. Perisher Valley became famous when Kerry Packer, at the time Australia's richest person, took over the running of the valley.

* In the 1970s National Parks and Wildlife began looking at Blue Cow as a possible ski destination.

* In 1976 an all denominational church is opened.

*  In November 1984 the bid by Mt Blue Cow Ski Bowl Pty Limited was selected for the development of Blue Cow.

* In 1991 Guthega was purchased by the Alpine Australia group who were operating the Blue Cow resort.

* In 1995 the Perisher Blue Company was formed to combine the resources of the ski fields and the Skitube alpine railway.

* In 2015 the US company, Vail Resorts, paid $176.6 million to Murray Publishers and Transfield Corporation for Perisher Valley, Smiggin Holes, Blue Cow and Guthega.

There is an extensive and comprehensive website which provides most of the information needed to make sensible decisions about ski destinations. Check out https://www.perisher.com.au. 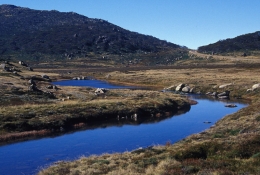 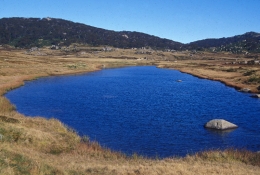 An alpine lake beside the road between Perisher and Charlotte Pass. 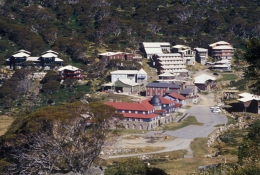 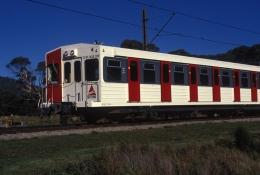 The Skitube to Blue Cow.