Although it is located on the Midland Highway, Perth has remained relatively unchanged since Georgian times when most of the houses in the main street were built. The result is a village of great charm with no fewer than 33 heritage buildings to be admired by the traveller. It is a feast of impressive, but simple, Georgian houses.

Perth is located 181 km north of Hobart and 18 km south of Launceston via the National (Midland) Highway.

Governor Lachlan Macquarie, a native of Scotland, chose the name Perth (it is a town on the River Tay in Scotland) when he passed through the area in 1821.

Historic Buildings
There is a National Trust brochure which is available around the town. It can be obtained at the post office. It lists no fewer than 33 building heritage buildings. These range from hotels, to private homes, to shops, churches and historic inns. Take time to explore the town's heritage.

The Leather Bottle Inn
Located at 55 Main Street and more correctly called the Leather Bottell Inn, this inn dates from the 1830s and is the oldest (or second oldest) building in Perth. It was named after a hotel in Cobham, Kent, England which was a popular watering hole for the novelist Charles Dickens. He even had his favourite seat. Some of the walls are over 60 cm thick and there are still handmade nails in the original cedar. John MacNamara, a police constable was shot and killed at the inn by two other constables (ex-convicts) who were tried for his murder and found guilty of the crime. Both were executed. Over the years the Leather Bottle has been a Hotel (Inn), Post Office, a private boarding house (it was originally two storeys), a private residence and more recently a licensed restaurant. In 2013 it was for sale. At the time it was a shop selling antiques.

Jolly Farmer Inn
The former Jolly Farmer Inn is located at 21 Norfolk Street and is notable because of its one and a half storey brick structure. It was built  by Alan McKinnon in 1826 and was a popular coaching inn for most of the 19th century. It was turned into a private home many years ago.

Baptist Tabernacle
One of the town's most impressive buildings is the Perth Tabernacle (the local Baptist Church) which is located in Clarence Street. This ornate Romanesque Revival-style brick building, which was constructed in 1889, is characterised by a ribbed iron, domed roof and large panelled doors. It has been designed as an octagon.

St Andrews Church
This interesting Victorian Free Gothic-style church dates from 1878, was consecrated in 1879, cost £1,820 to build, and features buttressed walls, a gabled roof and lancet windows. It ceased to be a church in February, 2008.

Eskleigh
Eskleigh is a gracious and attractive two-storey residence dating from 1870 with, four granite pillars, a three level tower, two-storey bay windows with stained glass depicting Australian flora and fauna, and a number of outbuildings. Set in 23 acres and featuring beautiful flower gardens, it is a fine example of a Victorian Classical mansion designed in the style of an Italian villa. It is located at the southern end of town on the Midland Highway just past Drummond Street. Eskleigh's name is derived from its position on the South Esk River. Today it is known as Eskleigh Home, a care facility for adults with severe or multiple disabilities. The Eskleigh website explains the fascinating history of the home and how it became a care facility: "Eskleigh Home incorporates the old home of Mr William Gibson and his family, which was called 'Scone'. The land was first granted to Captain John R Ritchie, but on his death it passed to his brother, Captain Thomas Ritchie. Thomas built a new house on the riverbank, just down river from the present dwelling, and by 1833 had a flour mill operating by water power. But natural disaster seemed to plague the mill. It was washed away in the Great Floods of 1852, and then rebuilt, only to be destroyed again by fire just a few days after Mr Gibson purchased the property in 1867.

"In 1870, Mr Gibson began to build his new home, for which he harnessed the water power provided by the old mill race to run a generator. This provided electric light for the house and the outbuildings, and it is believed that the home was the first private dwelling in the Southern Hemisphere to be lit by electricity.

"The property remained in the Gibson family and became famous for its merino sheep. The Gibsons were generous people with a strong social conscience and contributed much towards the development of Perth, including the Baptist Church.

"With the death of Mr W Gibson Senior in 1943, the property came into the possession of Mr B Gibson, who found it far too large for his needs.  So, through a great act of generosity by the family and the help and hard work of many people in the community, it was decided that the old home would become a place of care for adults with severe or multiple disabilities.  Eskleigh Home was born." There is a detailed architectural description of the building at http://www.eskleigh.com.au/history

Gibbet Hill
Located on the Midlands Highway about 2 km north-east of Perth is Gibbet Hill. It was here in 1837 that the authorities hanged a bushranger named Mackay (or McKay) who had murdered a passenger on a mail coach. He was executed in Hobart and his body brought to the gibbet to hang as a warning to potential robbers of mail coaches. As the Tasmanian writer, Martin Flanagan, has noted: "If I drive north and go through Perth, the first landmark I always note is Gibbet Hill, where the body of a man called John McKay was hung in chains in 1837 beside what was then the road from Launceston to Perth. Gibbet Hill is a road sign of an early Tasmanian kind."

* The first Europeans into the area arrived in 1806. They were exploring the area around Launceston.

* In 1811 Governor Lachlan Macquarie, on his first visit to Van Diemen's Land, passed through the district.

* On 30 May, 1821 Macquarie passed through the area again. He chose the site near where the Perth bridge stands today as the location for a future township. He named the future town Perth after the town of the same name in Scotland.

* Perth began to grow when a ferry across South Esk river was installed and a military post and an inn were established. It is known that the first settler was Thomas Massey, the Chief Constable of Launceston, who established a farm in the district in 1814.

* In 1824 Massey's farm was raided, and the barn was burnt down, by the bushranger Matthew Brady.

* In 1835 a Lieutenant William Kenworthy, the Inspector of Public Works, designed the bridge across the South Esk river which was constructed by convict labour and opened in 1836. The bridge had a colourful career because the Esk was prone to flooding. It was damaged by a flood before it was finished; a new bridge was completed in 1839; that bridge was damaged by floods in 1841 and in 1929 it was totally destroyed by a flood. It was rebuilt in 1931 and washed away again in 1971.

* In 1837 the bushranger Mackay (or McKay) was hung from Gibbet Hill as a warning to other bushrangers.

* In 1947 the elegant Victorian mansion, Eskleigh, became a home for adults with severe or multiple disabilities.

* Today Perth is a significant historic village with a large number of well-preserved Georgian and Victorian buildings.

There is a useful overview of the town's history at http://www.heritageaustralia.com.au/search.php?state=tas&region=112&view=87 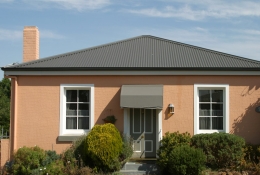 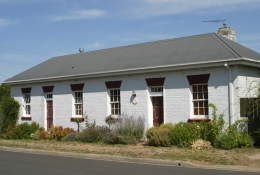 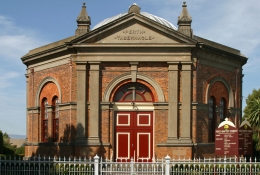