Historic railway town in the southern edge of the Flinders Ranges.

Peterborough is a rare railway town where, because state governments could not agree on a standarised railway gauge, three railway gauges (broad - 5'3", standard 4'8 1/2" and narrow 3'6'') once met. The town became hugely important as a railway link between the mines at Broken Hill and the iron and steel processing at Port Pirie. At its height over one hundred trains a day were passing through the town. It is therefore hardly surprising that it has a museum in a railway carriage and its prime tourist attraction is the "Steamtown" Heritage Rail Centre.

Peterborough is located 246 km north of Adelaide via Gawler and Burra.

There are two possible explanations for the name. The first argues that it was named after Peters Store - the first general store in the town. The second, more widely accepted, argues that Peter Doecke, who owned the land upon which the town was built, decided to divide his land and sell it at auction. By the end of the first day he had sold 33 acres for £1700. To honour this remarkable achievement the town was named after Doecke and became 'Petersburg'. In 1917, when anti-German sentiment was at its height, the town's name, which sounded too German, was changed to Peterborough.

Steamtown Heritage Rail Centre
Launched in 1977 Steamtown, now known as the Steamtown Heritage Rail Centre, was originally created to run a steam train service between Peterborough and Quorn with rolling stock dating from 1920s. It was designed to provide visitors with the experience of an old-style railway journey. Today it focuses on the memories of the town's impressive railway history. Located at the western end of town, the Heritage Rail Centre has original railway workshops and tools, the impressive half-circle Roundhouse which was built in 1925-1926, the unique triple gauge turntable (reputedly the only one in the world), lots of historic rolling stock and an historic weighbridge. The website (http://www.steamtown.com.au) points out that "In daylight hours, you’ll tour the sheds and the extraordinary heritage-listed ‘Roundhouse’ before getting hands-on with heroic locos and luxury carriages. And at night, you’ll thrill to the award-winning ‘Sound and Light Show’, when this powerful story plays out on a stage like no other."
Steamtown Heritage Rail Centre is open 9.00 am to 5.00 pm daily, with guided tours offered any time between 9.00 am and 3.30 pm. Low season (November - March) tours are between 10.00 am and 2.30 pm. Bookings for Sound and Light Shows, as well as Steamtown Feature Movie sessions, can be made. tel: (08) 8651 3355. During low season (December to February) do not book online, ring to make your booking as we need to have 6 or more people for the show to be presented during this season.

Town Carriage Museum
Located at the western end of Main Street, the Town Carriage Museum (it is also the local Visitor Information Centre)  is open from 9.00 am - 5.00 seven days a week. It is a unique use of an old first class sleeping carriage dating from 1917. There are eighteen glass case displays which "represent events in the town’s history, people of significance and aspects of life in the town. Presented together in a simple chronology – a timeline of sorts – through to the present day, they offer a complete picture and illustrate that this town is diverse, interesting and about much more than just railways." There are also two sleeping compartments which have been turned into a photographic exhibition which shows works from the Lionel Noble collection as well as a screening room which shows landscapes from Broken Hill to Port Pirie. The carriage, reminiscent of past times, features pressed tin ceilings, leadlight glass, leather seats and polished timber. Check out http://www.peterborough.sa.gov.au/page.aspx?u=280 for more information.

Town Hall
The Peterborough Town Hall is one of the largest town halls in South Australia. It stretches along the main street and dominates the streetscape. Built between 1926-1927 it originally had five shopfronts but they have all been converted into council offices. Enter the building to inspect the ornate staircases and the impressive Federation quilt, which was completed in 2001 after an estimated 2000 hours of labour, and which was donated by the Peterborough Patchworkers.

The Statue of Bob the Railway Dog
Located in the small park in front of the Visitor Centre is Bob the Railway Dog, a sculpture created by South Australian sculptor, Silvio Apponyi. There is an entire website devoted to this dog - check out http://www.bobtherailwaydog.com with vast amounts of information (he really did become internationally famous during his life - 1882-1895) including a letter to The Spectator in London which described his uniqueness: "I often see interesting letters to the Spectator about dogs, and I thought perhaps your readers might like to hear about the best known dog in Australia. His name is Railway Bob and he passes his whole existence on the train - his favourite seat being on top of the coal box. In this way he has travelled many thousands of miles, going all over the lines in South Australia. He is well known in Victoria, frequently seen in Sydney and has been up as far as Brisbane! The most curious part of his conduct is that he has no master, but every engine driver is his friend. At night he follows home his engine man of the day never leaving him or letting him out of his sight until they are back on the Railway Station in the morning, when he starts off on another of his ceaseless journeys. I have not seen him on our line for some time, but noticed with regret last time he was in the station he was showing signs of age, and limping as he walked. E Cresswall. Adelaide, August 24th. 1895."
The inscription on the sculpture explains: "The story of Bob, railway mascot, begins when he was rounded up in Adelaide in 1883 with a lot of other stray dogs being sent north to the rabbit plague. He was adopted by railway guard William Ferry of Terowie and a few months later moved with him to Petersburg. Bob began travelling on trains, first with his owner and then on his own. He jumped on and off trains as the mood took him making interstate journeys and short suburban trips on trams as well as trains (he also made river trips on the Murray Steamers). When he heard the whistle of a train he was off! He travelled far - to Sydney, Melbourne, Oodnadatta, Broken Hill, Mt Gambier and more. "When he died in 1895 he was mourned by the travelling public all over Australia."

Meldonfield Miniatures at the YMCA
Located on Main Street between the Town Hall and the Visitor Information Centre, the YMCA Building now has the unusual Meldonfield Miniatures created by Eldon and Mary Zimmermann. The exhibits include a 1:12 scale model of the original Petersburg Railway Station.  There are also miniature Cobb & Co coaches with miniature people as well as a display of the huge number of tools and plans which have been used to create the miniatures. Upstairs the Peterborough Historic Group has housed artefacts associated with the history of “Petersburg to Peterborough” and the surrounding region. The exhibits are open daily from 9.00 am to 4.00 pm.

Peterborough Printing Works
Located at 7-9 Jervois Street and open Wednesday, Thursday and Friday from 10.00 am - 1.00 pm (tel: 0408 220 248 or 0400 461 100 to open it at other times) this is a fascinating reminder of a world of printing and newspapers that is fast disappearing. The building was where the Peterburg Times was printed from 1891. It closed in the 1970s but it has been beautifully maintained. Time has stood still and it is a window into a world of typefaces and printing presses that is almost gone.

St Cecilia Heritage Mansion Hotel
Located at 2 Callary Street, this gracious 20 room mansion was made from hand hewn sandstone and was originally the home of Bishop John Norton, the Bishop of the Roman Catholic Archdiocese of Port Augusta. It was built around 1912 in a distinctive Edwardian style. In the 1920s it became a boarding school and convent and remained so until 1973. It is closed but check with Visitor Information.

Entry Signs to Peterborough
There are four entry roads to Peterborough and each has a different sculpture of a steam engine which was created by local blacksmith and sculptor, Colin Campbell.

Victoria Park
Colin Campbell was also responsible for the entrance gates and fence at Victoria Park, created and named after Queen Victoria on her 60th Jubilee in 1897. Located on Queen Street, the park features a lake with a little island inhabited by swans and ducks. There are picnic facilities and it is a pleasant place for a leisurely stroll.

* Prior to the arrival of Europeans the area was home to people from the Ngadjuri First Nations people.

* Land was selected in the district and purchased from the government in 1875. It was, as Johann Koch one of the first settlers was to observe, 'a wild place and kangaroos were swarming'.

* In 1878 William Heithersay established a blacksmith's shop in the village. It was the first business.

* In 1879 a public meeting was held to formally establish a village. There was news that the town would soon be connected to the mines in Broken Hill by a railway.

* In 1881 the rail link from Port Pirie reached the town.

* By 1886 the railway connection to Broken Hill was completed.

* In 1886 the town was declared a municipality.

* The railway line to Silverton and Broken Hill opened in 1887.

* By 1898 seventy trains a day were carrying ore from Broken Hill through the town.

* Between 1911 and 1914 the railway through Peterborough was recognised as the busiest single track in the world.

* The town's name was changed in 1917 when anti-German sentiment was so strong that the Nomenclature Act insisted that all German-sounding names be changed. It was changed from Petersburg to Peterborough. That year saw the first train from Brisbane to Perth pass through the town.

* In 1923 a record 102 trains passed through Peterborough in a single day.

* In 1925 the "South Australian Railways: Peterborough Division" was created.

* The Ghan rail from Adelaide to Alice Springs passed through Peterborough from 1929.

* 1970 saw the first Intercontinental train from Sydney to Perth pass through the town.

* Today the town is a small service centre for the surrounding farms. 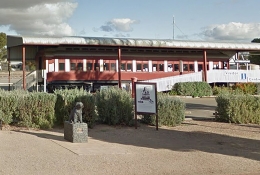 The Carriage Museum with Bob the Dog outside. 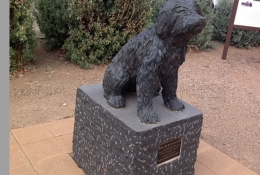 Sculpture of Bob the Dog outside the Visitor Centre. 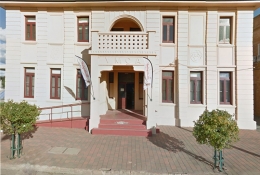 The impressive YMCA building next to the Town Hall. 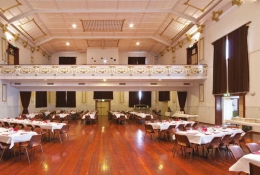 The impressive interior of the local Town Hall. 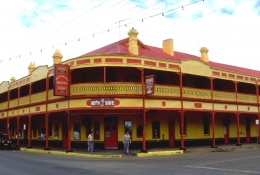 The local Peterborough Hotel in the Main Street. 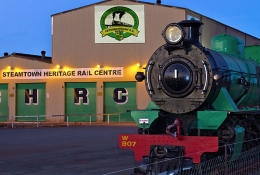 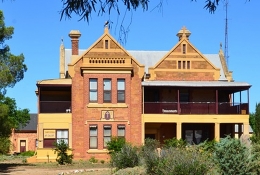 St Ceclilia's - once the home of the local Bishop.