Town infamous for the Battle of Pinjarra and the Fairbridge Farm School for British orphans.

Pinjarra is a rural service town which, in recent times, has become a popular daytripper destination for Perth holidaymakers wanting to visit the local zoo or take pleasant walks in the hinterland. It has had a star-crossed history being the setting for one of the bloodiest massacres of Aborigines in Western Australian history and the home of Fairbridge, a British child migration scheme housing facility, which resulted in appalling abuse of hundreds of the children between 1913 and 1981.

Pinjarra is located on the banks of the Murray 83 km south of Perth via the Kwinana Freeway.

It is now widely accepted that 'pinjarra' is a Binjareb word - 'beenjarrup' - meaning 'place of the swamp'.

The Battle of Pinjarra
There is a monument to the Battle of Pinjarra, as it was called, on the Great Southern Highway at edge of town. Pause and consider that this was one of the most infamous incidents in the relations between Europeans and the local Aborigines and it is a story which deserves to be remembered. In my book, Blood on the Wattle: the Massacres and Maltreatment of Australian Aborigines since 1788, I recounted the 'battle' in detail.

"They might have called it the 'Battle of Pinjarra'  but like all of the massacres of the Aborigines it was more a case of wholesale slaughter than of some equally poised, European-style battle. It was the same story which had been enacted on every frontier: the same overreaction to 'black atrocities'; the same desire to 'teach the blacks a lesson'; the same random killing.

Ever since the small band of settlers rowed up the Swan River looking for good pastoral land there had been 'trouble'  with the Aborigines. The local people had resisted the white advance. Cattle had been speared. The occasional white had been speared. Life on the frontier was fraught with dangers. The settlers developed a sense of antagonism and hatred. They were happy to attack and kill Aborigines whenever the opportunity arose. Two years before the Battle of Pinjarra, a Swan River settler declared that he was prepared 'to watch and attack the natives, and kill, burn, blow up and otherwise destroy the enemy.'

It was in this kind of hostile environment that Captain James Stirling, Governor of the Colony of Western Australia, responded to continuing requests for military protection from a small group of settlers on the Murray River. The new settlement at Pinjarra lay some 80 km south of the Swan River settlement. Stirling formed a party of about twenty-five whites. The group was a mixture of police, soldiers and a few settlers. Their plan was to 'punish' (ie. massacre) any Aborigines in the local area in order to drive home the message that white settlers and their cattle must not be attacked or speared. One account of the massacre explained the rationale for the attack as simply that 'the moment was considered propitiously favourable for punishing the perpetrators of such and other diabolical acts.'

The party came across a group of seventy Aborigines. The Aborigines, sensing trouble, fled into the bush. Stirling divided the party and attempted to encircle the fleeing group. They caught them at a river crossing and when the Aborigines showed signs of retaliation, Stirling and his men opened fire.

No one knows how many people were killed. Estimates vary from fourteen to thirty. Those who had not been shot cowered helplessly as the posse advanced. Then, with the scent of victory in his nostrils, Stirling called out for the bugle to be sounded and for his troops to cease firing. The Aborigines many not have seen the massacre as a 'battle' but Captain Stirling, who had seen action in the West Indies, South America and the American war, declared his forces victorious.

The remaining Aborigines were rounded up and taken prisoner but soon after this Stirling decided to set them free 'for  the purpose of fully explaining to the rest of the tribe the cause of the chastisement, that had been inflicted.'

The 'battle'  was regarded by both Stirling and the settlers as a success - it certainly did much to break the will of the local Aborigines."

Pinjarra Heritage Trail Walk
The Pinjarra Heritage Trail Walk is only 1.2 km long and passes along the tree lined banks of the Murray River, crosses the pedestrian suspension bridge and the pauses at a number of beautiful old buildings including the Court House (1935) and the Post Office (1895), which in season has the most beautiful yellow frangipani outside, St John's Church (consecrated in 1863), the Old Schoolhouse (1896), the privately owned 'Liveringa' (1885), an attractive colonial homestead with wide verandas, and the beautiful 'Edenvale' (1888).

Edenvale Heritage Complex
Located at the corner of George and Henry Streets in Pinjarra, the Edenvale Heritage Complex comprises two houses and a number of associated farm buildings. 'Edenvale' (1888) is a gracious dwelling of 18 rooms built from locally fired bricks and consisting of the house as well as barns, a dairy and two small houses. The house was home to Edward McLarty who was a member of the state's Legislative Council for 22 years. McLarty's son, Ross, was a parliamentarian for 32 years and was Premier of Western Australia from 1947–53. The complex includes the Roger May Museum which houses historic farm equipment as well as a second house, Liveringa, which was built in the 1860s. It is open daily from 9.00 am - 4.00 pm with free admission, tel: (08) 9531 7777 and check http://www.collectionsaustralia.net/org/1651/about/ for more details.

Peel Zoo
Peel Zoo is a privately owned zoo located in Sanctuary Park Road on the banks of the Murray River. It is proud of its 'point of difference' which is that it offers children (and adults) a ‘hands-on experience’ which, in practical terms, means that visitors get to feed the animals, hold a snake and  pat foxes and ferrets. The zoo itself has over 100 species of birds and animals including koalas, wombats, dingoes, reptiles, bengal cats, spotted quolls, possums, owls and Tasmanian Devils which have become one of the main drawcards. Check http://www.peelzoo.com.au/, tel: (08) 9531 4322.

Old Blythewood
Old Blythewood is located 5 km outside Pinjarra on the South West Highway. Set on a high bank overlooking the fertile flats of the Murray River, the house was built about 1860, both as a private residence and a hotel, by John McLarty who had arrived in Western Australia in 1839. John and Mary Anne McLarty were amongst the first Europeans to settle in the Murray District around 1842. John was a tenant farmer and Mary Anne the local postmistress. The complex comprises the main house with six bedrooms, two offices, a dining room, parlour, front and back veranda and the Kitchen block with the caretaker's quarters, kitchen, scullery and creamery. Patrons of the hotel and post office entered the small rooms off the veranda while access to the family bedrooms was from the dining room and parlour. The National Trust now run the building. It is open Saturday 10.30 am - 3.30 pm and Sunday 12.30 pm - 3.30 pm. tel: (08) 9531 1485. Check out http://www.nationaltrust.org.au/wa/old-blythewood.

Cooper's Mill
Cooper's Mill which is located on Culeenup Island and is only accessible by boat. It was the first flour mill in the Murray region. Joseph Cooper built it by collecting limestone rocks and, every morning, sailing them across to the island. Cooper began work on the mill in 1843 but he was killed in an accident before it was completed in 1850. Cooper was a wheelwright so he had the skills to make the machinery. His sons Thomas and James inherited the mill and with the help of Dan Myerick, a carpenter, and Josiah Stinton it was completed.

The mill is a triumph of tenacity. Cooper was faced with enormous problems. The stone probably came from a place 15 km away. It has been suggested that he rowed along a shallow pathway to reach the island and that he used the easterly wind in the morning to row across and the sea breeze in the afternoon to return. The mill was used between 1850 and 1865. A combination of floods and bushfires effectively brought milling operations to a halt. For a time it was used as a smokehouse for curing fish and up to the 1930s it was the home of an eccentric Russian emigre known as Old Martin. It was restored in 1930, 1984 and 2001. The result is a beautifully white washed building. There is a detailed description of the mill at http://www.mandurahcommunitymuseum.org/downloads%5CCooper_Mill(2).pdf.

Fairbridge
Fairbridge is located a few kilometres north of Pinjarra on the Great Southern Highway. This famous farm school was established in 1912 by a South African 'visionary' Kingsley Fairbridge, who created a series of schools where "the orphans and poor children of the British Empire could be removed from their poverty".

Fairbridge spelt out his ambitions when he wrote: "I saw great Colleges of Architecture (not work houses) springing up in every man-hungry corner of the Empire. I saw children shedding the bondage of bitter circumstances and stretching their legs and minds amid the thousand interests of the farm. I saw waste turned to providence, the waste of unneeded humanity converted to the husbandry of unpeopled acres." It was an experiment in social engineering which continued to operate until 1981.

The boarding houses all have famous British names such as Nelson, Kitchener, Clive, Shakespeare, Livingstone, Oxford, Raleigh, and Darwin and they are nestled in amongst stands of trees. The setting is rural and peaceful. This facade was torn asunder in 2012 when the full extent of the abuse of children at Fairbridge was revealed. The West Australian reported (26 May, 2012 - http://au.news.yahoo.com/a/13784175/child-migrant-abuse-revealed/) that: "Figures obtained exclusively during a four-month investigation by The Weekend West show that 205 child migrants who were among those sent to the institution between 1930 and 1981 have been awarded more than $1.1 million in ex gratia payments. The payments were made under the Redress WA scheme for children abused in State care.

"The staggering number of payouts came to light after child migrants broke decades of silence to expose incidences of paedophilia, pack rape, brutal beatings and slave labour-like conditions that have scarred them for life."

Today the complex, which has been run by Fairbridge WA Inc since 1983, is used for programs for young people. As it says on its website: "Fairbridge works with children with a disability, young people at risk, young people with drug problems, the unemployed, young people in our justice system, young people who are struggling with life, indigenous young people and refugees, through to gifted young people. Fairbridge helps young people to reach their full potential and bring about long term positive sustainable change in their lives." All the cottages have self-catering facilities and the range of leisure activities is extensive. The current organisation has nothing to do with the old child migration program. Check out http://www.fairbridge.asn.au/ for details.

* Prior to European settlement the area was occupied by the Binjareb tribe of the Bibbulmun Nation.

* In 1830 Thomas Peel, an early Western Australian entrepreneur, established a settlement at the mouth of the Murray River.

* By 1834 the area around Pinjarra was known as rich grazing land with good grasses rich loam soils.

* The Battle of Pinjarra occurred in 1834 and is regarded as one of the most notorious massacres of Aborigines.

* In 1836 a military post was established where the present town now stands. It was built because the settlers feared reprisals for the infamous massacre.

* Shortly afterwards a townsite was laid out and by 1838 Pinjarra was connected by road to the settlement at Bunbury.

* By the 1840s Pinjarra had become the social and economic centre of the Murray River settlement.

* In 1974 Alcoa Australia Ltd established an alumina refinery in the area. 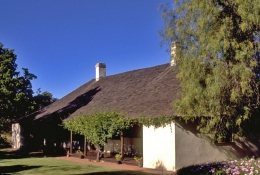 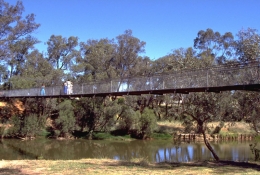 The suspension bridge across the Murray River at Pinjarra 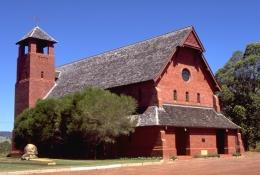 The church at Fairbridge 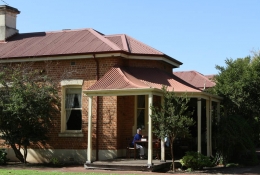 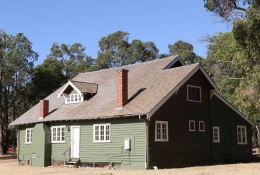 One of the boarding houses at Fairbridge 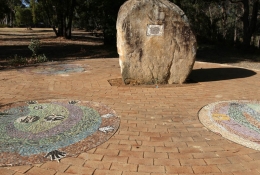