One of the five historic Macquarie towns on the outskirts of Sydney.

Pitt Town is positioned above the Hawkesbury River's floodplain. In the early 1800s, after a severe flood, it was moved from the rich and productive alluvial fields and paddocks beside the river to ensure its continuing viability. Today it is little more than a pub, a service station, a school and a number of genuinely interesting historic buildings which, typically, are almost hidden between more modern residences. Visitors need to park, preferably in Bathurst Street, and walk. With a little care it is quite easy to uncover the town's charm. It is true that there is much modern development but once you get into the back streets there are outstanding historic buildings standing as they did over 200 years ago. In the distance, on a clear day, it is possible to see the smoky green-blue of the Blue Mountains.

Pitt Town is located 59 km north west of Sydney via the M2 and South Windsor.

Pitt Town, one of the five Macquarie Towns, was named after the famous British statesman and Prime Minister, William Pitt the Elder.

Historic Pitt Town
There is a useful map (Pitt Town Heritage Map - http://www.hawkesburytourism.com.au/hawkesbury-maps/pitt-town-map.html) which lists a total of nine places of historic interest in the town. The best way to explore them is to go for a pleasant stroll through the village (5 of the 9 places are within two blocks of each other) and then drive down to Pitt Town Bottoms.

2. St James Anglican Church
St James' Anglican Church (behind which is a flood marker) was designed by the notable church architect, Edmund Blacket, and built by Thomas Collison for £1050 in 1857-58. Blacket also designed the 24 pews, pulpit, reading desk and communion rail. It is a typical Early Victorian Gothic Revival stone church which is notable for its restraint and simplicity.

3. Scots Presbyterian Church
Scots Church is a much simpler building than St James. It was built and dedicated in 1862 and is characterised by a timber roof, exposed buttresses and small-paned double-hung windows.

5. Strathmore
Located opposite the Primary School in Buckingham Street this stone cottage was probably completed by James T. Wilbow in 1876 although the kitchen may date back to 1826.

6. Bona Vista
One of the town's most impressive buildings is Bona Vista off Johnston Street (it was built for James Henry Johnson) which was built in 1888. The long entrance drive with its Norfolk Island pines and camphor laurels gives the dwelling a discreet elegance.

9. Pitt Town Bottoms
The Pitt Town Bottoms Road leads to the location of the first settlement in the district. It was here, in 1794, that Lieutenant-Governor Francis Grose granted fifteen 30 acre farms to a number of free settlers and it was from here that much of the fresh produce for the infant colony was shipped down the Hawkesbury to Sydney town. The settlement was forced to move to higher ground in 1809.

Other Buildings of Interest
The Old Manse
The Old Manse, a single storey sandstock building, is located at the northern end of Bathurst Street, and belongs to the Presbyterian Church at Ebenezer. It was built by Andrew Johnson circa 1828. The steeply pitched hipped roof extends over the veranda. There is a central six-panelled door and an original Georgian fireplace.

“Having sufficiently celebrated this auspicious Day of christening the five Towns and Townships, intended to be erected and established for the security and accommodation of the Settlers and others inhabiting the Cultivated Country, on the Banks of the Rivers Hawkesbury and Nepean; I recommended to the Gentlemen present to exert their influence with the Settlers in stimulating them to lose no time in removing their Habitations, Flocks & Herds to these Places of safety and security, and thereby fulfil my intentions and plans in establishing them.”

And so the five towns, now on the outskirts of Greater Sydney, were created by the orders of the governor. A good, old fashioned government edict.

* In 1791 Governor Arthur Phillip explored the area and camped beside the Hawkesbury River near the present site of the town.

* In 1794 Lieutenant-Governor Francis Grose, having named the settlement Mulgrave Place, granted fifteen 30 acre farms to a number of free settlers. This became a vital source of food for Sydney Town with the fresh produce being shipped to Sydney via the Hawkesbury River.

* In 1810 Governor Lachlan Macquarie established Pitt Town as one of the five Macquarie Towns. Pitt Town was planned in 1810 and named after William Pitt the Elder, the 18th century British statesman and prime minister.

* A site for a village was laid out in 1811. Governor Macquarie observed that "the ground is not so good or so conveniently situated for the settlers in general as might be wished, it being not less than 3 1/2 miles from some of the few of the front farms; but no better is to be had and therefore there is no alternative left but to place the town on these heights ... the great square, burying ground, and the principal streets being all marked by strong posts ... and the post, with the name of the town nailed to it, has been erected in the centre of the great square."

* The village was located too far from the rich river flats. In 1815 the settlement was moved to the present site because the settlers complained that the farms at Pitt Town Bottoms were too far from Cattai.

* In the 1850s the Maid of Australia inn was opened for business.

* By 1935 the town had electricity connected to every home.

* In 1981 Pitt Town was first used for the long-running TV series, A Country Practice. 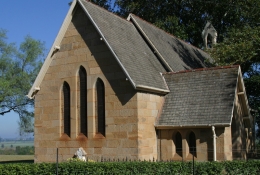 St James Anglican Church (1857) with the Hawkesbury Plains in the distance. 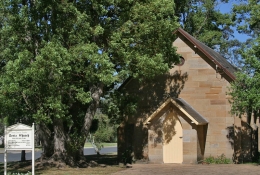 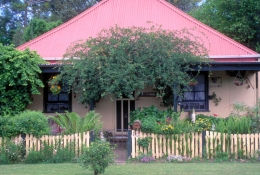 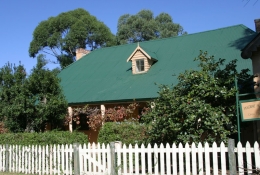