Hydro-electricity camp turned into a fishing and Christian destination.

Poatina is a hydro-electricity camp which has been turned into a Christian town. Located on a plateau in the heart of the Great Western Tiers it is a popular holiday destination for anglers and bushwalkers eager to explore both Great Lake and Arthurs Lake. Poatina enjoys spectacular views of the Great Western Tiers and is surrounded by some of Tasmania’s best inland fishing rivers and lakes. In 1995 most of the town was bought by Fusion Australia, a National Christian youth and community organisation devoted to helping homeless and unemployed youth. They have placed rules on behaviour in the village which they hope will lead to it being a secure and safe environment and, in its own way, idyllic.

Poatina is located 163 km north of Hobart and 60 km from Launceston via the Bass Highway and Poatina Road.

It is widely accepted that the word 'poatina' meant 'cavern' or 'cave' in the language of the Lairmairrener Aboriginal people.

Poatina Monument
When you enter Poatina from Poatina Road look to your right and you will see the remains of the Poatina Monument with a sign that reads "The monument representing the Past, Present and Future of Poatina was commissioned in 2004. However in 2010 a severe windstorm damaged two of the towers. Plans are now underway to rebuild them." So there it sits looking rather overgrown and dishevelled and if you look carefully you will be able to read the story of its genesis. "Each tower is constructed from hand-made glass bricks. The bricks were created in the village by Trinity College students and other volunteers using recycled glass collected in the village and surrounding region. Over two tonnes of glass were collected, washed, crushed and loaded into ceramic moulds before being melted in the kiln at temperatures over 900 degrees centigrade. The firing process for each kiln-load of bricks took over four days to complete. The glass bricks, derived from clear and green bottles and jars discarded as part of ordinary domestic life, appear opaque and solid by day but yet are transformed at night by internal light into beautiful pillars of light.

The pool is surrounded by a radiating triangular platform with masses of veins of different material forming a compass-like pattern of pathways representing the many parts of the globe from which people travelled to be part of Poatina. The veins are also a symbol of pathways back to many of those places as the village continues to grow as a place of international significance. Many objects and material unearthed around the village and power station have been used in the veins, including slabs of old concrete from ruined parts of the village. Indigenous plants and rocks have also been used, paying homage to the important indigenous and natural heritage of the area ... we are reminded of the value of even the seemingly mundane aspects of our shared existence together that all too often have gone missing in our fast-paced modern world. By night another symbolic transformation takes place: the humble marble like figures of the day are transformed into beautiful candle like pillars of light. Indeed it is often through the moments of darkness and trial that a community's true colours can be fully seen and appreciated." There is much more and it has been badly damaged by the storm.

The Poatina Labyrinth
Located at the entrance to the town the Poatina Labyrinth describes itself in a brochure available in town as "a pilgrimage in miniature. The aim of labyrinth walking is a spiritual centering, contemplation and prayer. The practice is ancient and found in many faiths. Although the path is winding, a labyrinth is set out in such a way as to constitute a journey towards the centre. Unlike a maze, a labyrinth has no false trails. The purpose is to connect, not to puzzle. Exit is by the same path in reverse. A labyrinth was inlaid in the floor of Chartres Cathedral, about 1200 AD. This was the era of pilgrimages to the Holy Land. Labyrinth walking offered an alternative to this dangerous journey. Penitents might walk the labyrinth on their knees ... For Christians, however, a labyrinth is not 'religious' in the sense of having power in itself to offer healing. Rather the purpose is to bring the pilgrim in touch with the God of creation and redemption."

Walking Around Poatina
There is an excellent brochure - Take a walk in Poatina - (available throughout the village) which outlines everything from a number of easy one hour walks around the town to two, three and five hour walks. Many of the walks pass through bluegum and beech forests with diverse vegetation and wildflowers. It is possible to see Bennetts wallabies, possums, quolls, potoroos, pademelons, bandicoots, echidnas and wombats and there are families of playpus in some of the creeks.

The Tiers Tea Room and Poatina Tree Art Gallery
Located in the East Wing side of the Village Green is The Tiers Tea Room, a remarkably friendly cafe with loads of atmosphere where tea and light refreshments are served from Wednesday to Sunday between 10.00 am - 5.00 pm. The teas, of which they are justifiably proud, are blended by a specialist tea maker in Hobart and consequently this a tea experience for connoisseurs and people curious about what really good tea tastes like. Next door is the excellent Poatina Tree Art Gallery where local artists (the village has attracted a number of genuinely interesting and talented artists) display their works - all of which are for sale. For more information check out http://tierstealounge.com.au/ and http://www.thepoatinatree.com.au/.

Poatina Power Station and Waddamana Museum
In 1988 Waddamana A power station was converted into a museum. Today it boasts faithfully restored original machinery, equipment from the old Shannon power station, historical photographs, artefacts from Waddamana village and an interactive display showing how a water turbine works. It is located off the Highland Lakes Road south of Great Lake. There is a detailed website with an "online tour" which covers the things to be viewed at the museum. Check out http://www.hydro.com.au/community/waddamana-museum.

Arthurs Lake
Reputedly Tasmania's most popular trout fishing lake, Arthurs Lake covers an area of 6,440 ha and has good boat ramps and camping facilities. The shores offer ideal fishing spots but the most favoured are Cowpaddock Bay, Hydro Bay, Pumphouse Bay and Morass Bay. There is a very detailed Inland Fisheries Service Fact Sheet  (http://www.ifs.tas.gov.au/archive/IFSDatabaseManager/WatersDatabase/arthurs-lake) which includes a useful short history of the origins of the lake and its brown trout. It also has a downloadable brochure and map. "This is Tasmania's most popular trout fishery, receiving more anglers and more angler effort than any other water in the State. Damming the Upper Lake River and flooding the area that originally contained two lakes, Blue Lake and Sand Lake, and the Morass marsh made the modern day Arthurs Lake. The water in Arthurs Lake is used for hydro electricity generation with the water being pumped into Great Lake to feed the power station at Poatina. Brown trout are the only species of trout recorded at Arthurs as has been the case since the 1960s. Rainbow trout were present in the early days. Arthurs is known for its good catch rate for its wild stocks of brown trout. There are three road accesses into Arthurs and numerous shacks and camping areas. Numerous boat ramps are available and the lake is popular for boat based fishers." Total bag limit: 12 brown trout a day.

Great Lake
The Great Lake is the largest of the hydro-electricity lakes in the Central Highlands. When full it covers an area of 17,610 ha, lies 1,034 m above sea level, holds 3,178 million cubic metres of water and is famed for its brown (minimum size 300 mm) and rainbow trout (minimum size 400 mm). Tods Corner, Little Lake and Canal Bay are favoured by anglers and there is good fishing near the hotels at Swan Bay and Haddons Bay. There is a useful, downloadable brochure complete with a good map, titled Great Lake Anglers Access at http://www.ifs.tas.gov.au/publications/great-lake-angler-access-brochure.

* Prior to European settlement the area around Great Lake was occupied by people from the Lairmairrener language group.

* In 1910 a private company started building the Waddamana power station.

* In 1914 the Tasmanian Government took over the partially completed Waddamana power station and completed the structure in 1916. In the process the Tasmanian Hydro-Electric Department was formed. Waddamana was the state's first hydro project.

* By 1964 there were three power stations(Waddamana A and B, Shannon) using water from Great Lake. That year Waddamana A and Shannon Power Station were decommissioned.

* Poatina was built in the mid-1960s specifically to house the workers on the area's hydro-electricity projects. It was a hydro town. The authorities built 54 brick veneer houses which now are all managed by a Strata Title Body Corporate.

* In 1988 Waddamana A power station was converted into a museum.

* In 1994 Waddamana B power station was decommissioned.

* In 1995 Fusion Australia, a Christian youth and community organisation purchased the chalet, educational and community buildings specifically to care for homeless and unemployed young people. They now effectively own and run the town. All new residents are interviewed and formally accepted by the village leadership. There is a ban on cats (with some exceptions) and a ban on drinking alcohol in public places.

* Today Poatina sees itself as a positive, Christian-orientated community. It is popular with anglers and bushwalkers who enjoy the Great Western Tiers and the lakes in the area.

There is an interesting community newspaper-style website at http://poatinavillage.com/ 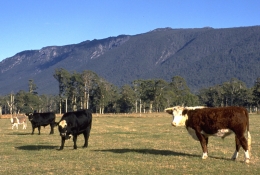 Cattle grazing below the Great Western Tiers near Poatina 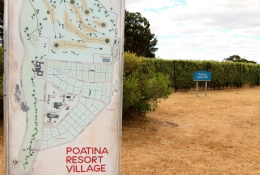 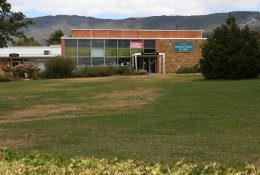 The town's General Store and "village green" are typical remnants of a hydro town. 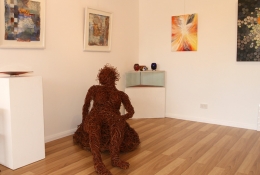 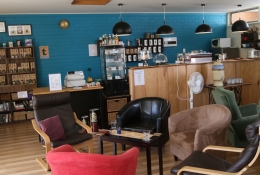 There's a relaxed, homey, intimacy about the Tiers Tea Lounge with its wide range of boutique teas. 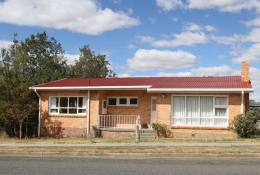 One of the 54 typically hydro-style homes in the town. Now privately owned they are all similar although not exactly the same. 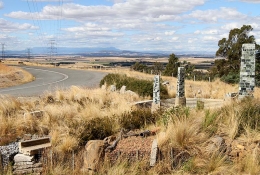 It was once the feature which caught your eye as you entered Poatina. Then a wind storm destroyed it. It will be rebuilt.