Point Lonsdale is a popular seaside holiday resort located on the western head of Port Phillip Bay. It lies 3 km east of Fort Nepean at the entrance to Port Phillip where the quiet waters of the bay meet the wild waters of Bass Strait. The water at the entrance to the bay is known as The Rip because of its turbulent cross-currents and variable depths. It is recognised as one of the most dangerous stretches of water on the Australian coastline. Point Lonsdale is now part of an urban sprawl which spreads along the shore from Queenscliff and between Lonsdale Lakes Wildlife Reserve and Port Phillip. The area is known for its pleasant walks and impressive views over the surrounding waters.

Point Lonsdale is 105 km south-west of Melbourne, 30 km south-east of Geelong and 4 km south of Queenscliff at the south-eastern tip of the Bellarine Peninsula.

Point Lonsdale was named in 1837 after Captain William Lonsdale who was the first police magistrate of Port Phillip.

Coastline at Point Lonsdale
Front Beach, in Lonsdale Bay, is the town's main holiday beach. It is sheltered and is popular for swimming and relaxing. The Back Beach, on the Bass Strait side of the town, is characterised by a series of large sand dunes. It is mostly used by surfers. There are plenty of opportunities for walking along the beaches, cliff-tops and through the stands of ti-tree. The foreshore around the headland is pleasant on sunny days and is particularly attractive at low tide when there are exposed rock pools and caverns.

Ballara
Located at 65 Glaneuse Road, Ballara "was erected in 1907-08 by Melbourne builder C Goodrich, for the then Prime Minister of Australia, Alfred Deakin. Designed by his wife Pattie, it was intended to be a place of retreat for the Deakin family. The house is primarily a simple, square hipped roof building, with dormer bedrooms, sleepouts, and encircling verandah. The walls are weatherboarded to sill height and are half timbered with roughcast stucco above." It is well hidden from the road and is a private home. More detailed information can be accessed at http://vhd.heritage.vic.gov.au/places/result_detail/1678.

Rip View Lookout
Located off Point Lonsdale Road (on the way out to the lighthouse) is Rip View Lookout which offers panoramic views over The Rip - a 3 km stretch of water dividing Point Lonsdale and Point Nepean - the two headlands at the mouth of Port Phillip Bay. It also offers access to the beach and a pleasant walk out to the lighthouse. With its turbulent cross-currents and variable depths 'The Rip' is recognised as one of the most dangerous stretches of water on the Australian coastline. For more information check out https://www.weekendnotes.com/rip-view-lookout-point-lonsdale which provides photographs and useful details.

Point Lonsdale Lighthouse
The Point Lonsdale Lighthouse is located at the end of Point Lonsdale Road. It provides panoramic views across the entrance to Port Phillip taking in Point Lonsdale, Queenscliff, Barwon Heads and Point Nepean. It is one of the few manned lighthouse left on the Australian coastline.
After a stone lighthouse was constructed at Queenscliff in 1863, the old wooden structure was dismantled and rebuilt at Point Lonsdale in 1867. In 1902 it was replaced by the current structure which stands 120 m above sea-level, radiating light for 30 km out to sea. It is manned 24 hours a day and is equipped with meteorological equipment, rendering it an important link in local weather forecasting.
The Victorian Heritage Database notes of the lighthouse "The Point Lonsdale lighthouse is of a traditional design consisting of a shaft and capital and closely follows the form of many late nineteenth century Victorian lighthouses. The structure is mass concrete tower similar in construction to the earlier Point Hicks lighthouse. The structure is surmounted by a Chance Brothers lantern. The original oil lamp of the light was replaced first with an acetylene light and later an electric light. Half way up the shaft is a cantilevered platform supporting red and green navigation lights which replaced a subsidiary light original to the 1901-02 structure" and "The Point Lonsdale Lighthouse group of buildings is of architectural significance for its lighthouse which is a typical and aesthetically pleasing example of an early 20th century lighthouse design, and the ancillary structures and fittings. The fog horn shed is the only known fog horn shed at a Victorian lighthouse and the two vertical boilers which provided the power for the steam operated fog-horns are rare in their original setting. While there are rocket sheds at three other Victorian light stations the rocket shed at Point Lonsdale is the only one located in close proximity to a lighthouse." Check out https://vhd.heritagecouncil.vic.gov.au/places/1693 for more details.
Tours of the lighthouse explain the history of the lighthouse and the challenge of the channel which ships had to pass through to enter Port Phillip Bay. They are conducted at half-hourly intervals from 9.30 am to 1.00 pm. Prior bookings are essential. Tel: (03) 5258 3440 and 0490 550 837 or check out details at http://www.queenscliffe.vic.gov.au/events/tour/item/point-lonsdale-lighthouse-tour.

Buckley's Cave
A cliff walk from the base of the lighthouse leads to Buckley's Cave. It is a rare opportunity to experience an aspect of one of the strangest convict stories – the story of the Wild White Man.
William Buckley was a huge man. He stood 6’6” (198 cm) and had seen military service in the Cheshire Militia. He was an extreme victim of English law. In 1802 he was sentenced to transportation for life. His crime? Receiving a roll of cloth knowing it was had been stolen.
The Australian Dictionary of Biography (see http://adb.anu.edu.au/biography/buckley-william-1844 for a full biograpy) records: “Bucklely was taken to Port Phillip in April 1803 in the Calcutta with a party under Lieutenant-Governor David Collins and there he and two companions absconded from the camp. Fearful, weary and hungry, they sent signals of distress to the Calcutta from the other side of Port Phillip Bay but these were not noticed. Buckley's friends turned back and were not heard of again. Buckley fed on shellfish and berries, and was befriended by Aboriginals of the Wathawurung tribe, who believed the big white stranger to be a reincarnation of their dead tribal chief. He learnt their language and their customs, and was given a wife, by whom, he said, he had a daughter. For thirty-two years he lived mostly in a hut but also in the cave which now lies below the lighthouse at Point Lonsdale
“Buckley said there were occasional white visitors to Port Phillip during these years, but he was afraid to give himself up until July 1835, when he overheard the Aborigines plotting to rob a visiting ship and murder the white intruders. He surrendered to the party under John Wedge at Indented Head. At first he had forgotten his own language, but he was identified by the tattoo mark on his arm, and the initials 'W.B.'
“Wedge, who thought he would be a valuable intermediary, obtained his pardon from Lieutenant-Governor George Arthur. John Batman employed him as interpreter at a salary of £50, and he later became government interpreter. But he was confused in his loyalties, and felt that neither the Aboriginals nor the whites trusted him entirely.
“Unhappy and disillusioned, he left for Hobart in December 1837. He became assistant store-keeper at the Immigrants' Home, and from 1841 to 1850 was gate-keeper at the Female Factory.
“He retired on a pension of £12 to which the Victorian government added £40 a year. On 27 January 1840 he had married Julia Eagers (also known as Higgins), the widow of an emigrant, at St John's Church of England, New Town. She had two daughters.
“Buckley died at Hobart on 30 January 1856.”

Point Lonsdale Jetty
At the end of Point Lonsdale Road is a jetty which extends into The Rip. Historically it has been a popular location for fishing (when it was made part of the Marine Park all fishing off the jetty was banned). It still offers extensive views across the entrance to Port Phillip - across the entrance to Fort Nepean and along the shoreline to Queenscliff.

Historic Cemetery
The cemetery on Williams Road (which runs off Point Lonsdale Road) is notable for containing interesting graves of early settlers. The Borough of Queenscliffe website notes: "The cemetery was gazetted in 1857, with the first interments taking place in 1860. The pioneers buried in the cemetery all played a unique part in building our town: the soldiers of the Garrison, Port Phillip sea pilots, government servants, lighthouse keepers, doctors, parsons, chemists, bakers, butchers, storekeepers and builders of hotels. The Agnes and George Baillieu Memorial Gates, at the corner of Jordan and Point Lonsdale Roads, are built of basalt and wrought iron and are dedicated to 'The Pioneers of the District 1954'." For more information check out http://www.queenscliffe.vic.gov.au/community/cemetery.

Marconi Memorial
A memorial cairn to Marconi, the first successful inventor of the wireless telegraph, is located in Royal Park, near the corner of Point Lonsdale Road and Anderson Street. It was from this point that the first wireless message from mainland Australia to Tasmania was made in 1906. Monument Australia records that: "More than 200 guests gathered on the top of a hill by the sea to attend the opening ceremony of the first Marconi Company wireless telegraph station. Lord Northcote sent the following historic message to the Governor of Tasmania: “The Commonwealth greets Tasmania and rejoices at the establishment of a new means for uniting the people of Australia more closely together.” For more details check out http://monumentaustralia.org.au/themes/technology/industry/display/33092-first-overseas-wireless-message-.

Walking Track
There is a 5.5 km walking track around the foreshore from Point Lonsdale to Queenscliff. Distance markers are located every 500 metres and the trail winds around the bay and through rural lands. There is a very detailed description of the walk on Weekend Notes. Check out https://www.weekendnotes.com/queenscliff-to-point-lonsdale-walking-trail.

Lake Victoria
Located off Shell Road to the south of the town is Lake Victoria, a shallow saline lake. It is part of a larger area known as the Lonsdale Lakes Nature Reserve and an important site for the waterbirds and migratory waders. A total of 81 species have been recorded including pelicans, cormorants, herons, egrets, ibis, spoonbills, crakes and rails. For more information check out https://www.geelongaustralia.com.au/wetlands/article/item/8cf9165b37f60bd.aspx.

Port Phillip Heads Marine National Park
The Port Phillip Heads Marine National Park stretches from Back Beach around to Front Beach, includes the Port Lonsdale headland, and includes the coastal rock platforms which have the highest invertebrate diversity of any calcarenite reef in Victoria. It can be easily viewed and accessed from Point Lonsdale Road and the lighthouse.

* The first European in the area was Lieutenant Murray who spent over three weeks exploring the coast in 1802.

* The first European settlement on Port Phillip Bay was established in 1803 and abandoned the following year.

* In 1803 a convict escapee named William Buckley was adopted by the local Aborigines. He lived at Point Lonsdale for 32 years. He is reputed to have lived in a cave beneath Point Lonsdale lighthouse.

* White settlement did not occur until the 1830s after the establishment of Melbourne.

* A pilot service for ships passing through The Rip was established near Shortland Bluff in 1838.

* Queenscliff emerged as a town in the early 1850s.

* A signal station was established at Point Lonsdale in 1854.

* A stone lighthouse was constructed at Point Lonsdale in 1863.

* The first land sales at Point Lonsdale occurred in 1876.

* In 1879 the railway from Geelong reached Queenscliff.

* In 1883 the Point Lonsdale tennis, bowls and croquet club was opened.

*  In 1902 the current Point Lonsdale lighthouse was built. That year saw the opening of a local post office.

* In 1906 the first overseas wireless message was sent overseas (to Tasmania) from Point Lonsdale.

* In the early 1900s a shell-processing works was established west of Point Lonsdale. Shell grit was removed and processed for commercial usage in glass-making and the poultry industry.

* Large deposits of shells found beside the Geelong Highway in 1935. 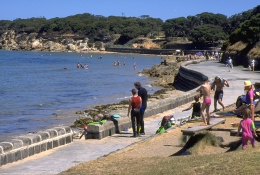 The beach at Point Lonsdale 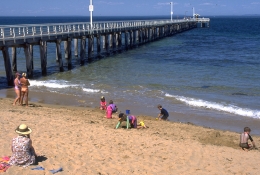 The pier at Point Lonsdale on the Bellarine Peninsula 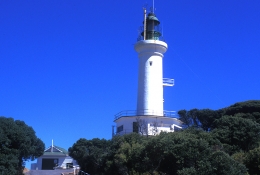