Heart of the Hunter Valley vineyards

Pokolbin is not a town and although some refer to it, for historic reasons, as a village this is also not quite correct. The area is essentially a district bisected by a number of roads along which are spread some 150 vineyards with businesses which complement the wineries: accommodation, restaurants, galleries, nurseries, providores and gift shops. The area incorporates the "towns" of Pokolbin, Lovedale, Nulkaba, Mount View and Rothbury (there are separate Aussie Towns entries on Branxton, Greta, Cessnock and Wollombi) and all these destinations are associated with just one thing: wine. These are the vineyards of the Lower Hunter - a paradise for wine lovers and of little interest if you are not passionate about the glorious grape.

Pokolbin is located 163 km north of Sydney and 11 km north west of Cessnock.

There is some argument about the origin of the word "Pokolbin". It was possibly a name used to describe the area by the Darkinjung Aboriginal people meaning "a very hot place" but there is also an argument that it is an Hungarian word meaning "in the hell". Whichever is correct the origins of the name are complex. Land north of Cessnock at what is now called Nulkaba was reserved for a church and school during the first surveys of the area in 1829. This land was intended as an administrative centre for the district and a village was laid out in 1884-85 and called 'The Village of Pokolbin'. By 1890 it was known as Cessnock. That name was transferred to the town now known as Cessnock in 1908 and the local name, Nulkaba, was officially adopted in 1927. By that time the farmland to the west had become known as Pokolbin. Never has a place name been so confusing.

Hunter Valley Vineyards
Aussie Towns is a guide to towns and the Hunter Valley wine region is uniquely characterised by not having a central town. It is a series of over 150 vineyards stretching from Cessnock in the south to the New England Highway in the north. There is a dedicated website - http://www.winecountry.com.au - which covers all aspects of the vineyards and the Hunter Valley including accommodation, suitable cellar doors, tours (so you can drink and not drive), restaurants and diverse things to do.

Brick Beehive Kilns
Located in the grounds of the Potters Hotel Brewery Resort on Wine Country Drive in Nulkaba are two beehive structures which are an unusual part of the history of the Pokolbin area. The first brickworks were set up by Stephen Arthur Hennery and Mark Robinson on 10 acres. The location was chosen because the local clay deposits were suitable for the making of bricks. The initial business was very simple with wire cut pressed bricks being used in coal mines, houses and public works.
By 1928 a company known as Robinson and Hennery Ltd had been formed and the kilns were being used to produce garden terracotta pots as well as bricks. A new kiln was commissioned from a pottery manufacturer in England. The following year the company changed its name to Cessnock Potteries.
By 1931 Cessnock Council accepted a tender for salt glazed stoneware pipes for the development of sewerage lines in the area. During this time brick and garden pottery ceased at Cessnock Potteries. This expansion continued and sewerage pipes were supplied to Scone, Singleton and Muswellbrook as well as Condobolin and Bourke. During the 1940s renovations where undertaken to convert to electric power and during World War II the company was declared an essential industry for the war effort. The kilns are Heritage listed. For more information check out http://www.pottershbr.com.au.

Hunter Valley Zoo
Located at 138 Lomas Lane, Nulkaba and open six days a week (closed on Wednesdays) between 9.00 am - 4.00 pm the Hunter Valley Zoo has a mixture of international animals and local favourites including dingoes, Tasmanian devils, wombats, kangaroos, koalas, snakes and birdlife. It currently offers an opportunity to get up close and personal to meerkats, marmosets and Emperor tamarin. There are keeper talks every half hour from 10.00 am starting with dingoes, Malayan tapirs, African lions, Capuchin monkeys, koalas, meerkats, squirrel monkeys and at 3.00 pm the white African lion. For more information check out https://www.huntervalleyzoo.com.au.

Hunter Valley Gardens
Located on Broke Road, Pokolbin (just down from McDonalds Road) the Hunter Valley Gardens are open every day from 9.00 am - 5.00 pm. The huge complex includes a range of specific gardens spread across 60 acres (24 hectares) including The Sunken Garden, the Storybook Garden, the Rose Garden, the Oriental Garden, the Lakes Walk, the Italian Grotto, the Indian Mosaic Garden, the Formal Garden, the Chinese Garden, the Border Garden. On the website the Gardens Creator, Bill Roche, explains:  "Hunter Valley Gardens has many outstanding features including 10 differently themed garden areas with over eight kilometres of pathways, all carefully graded for easy walking. A talented crew of some 40 and at times 50 gardeners worked week in and week out for over four years constructing the gardens. They were all marvellous people and most had a real love of nature and a joy in creating something of beauty for today and for the generations to come ... Hunter Valley Gardens aims to provide visitors with a magical experience – a combination of the sounds of water and birds, together with a multitude of fragrances and colour. For many, an exciting and enriching experience, for others one of calm and comfort. I trust we have provided something for everyone." For more detailed information on these remarkable gardens check out http://www.huntervalleygardens.com.au.

Tours
There are an excess of wine tours (probably because drinking and driving is never a sensible option) through the Hunter Valley. The best access point is the Wine Country website (check out http://www.winecountry.com.au/tours-and-transport-search/results) which lists 36 tour companies ranging from horse and carriage tours through balloon safaris to a vineyard shuttle service, silver service limousines, Cadillacs, bicycles, buses and "two fat blokes" gourmet tours. The website provides information about prices, times and experiences.

Other Attractions
There is a bewildering array of activities - walk the Great North Walk, have a spa at the Golden Door Elysia Health Retreat, hire a bicycle, go for a joy flight over the valley, take a balloon ride, visit an alpaca farm, play aqua golf, and explore the valley on the Tourist Drive. All these and many more are listed and described at http://www.huntervalleyvisitorcentre.com.au/the-hunter-valley/central-pokolbin.

* Prior to the arrival of Europeans the area was home to the Darkinjung Aboriginal people.

* Viticulture in the Hunter Valley started with James Busby who, in the 1820s, studied oenology, wrote a treatise and guidance manual on the subject and briefly taught viticulture at a Liverpool farm school.

* In 1831 Busby toured French and Spanish vineyards and returned with 700 cuttings of European vines. Half he took to the family estate of Kirkton, just north of Belford. There he established what was probably the first vineyard in the district.

* Land north of Cessnock was reserved for a church and school during the first surveys of the area in 1829.

* The original St Patrick's Catholic Church was consecrated in 1872.

* The name was transferred to the town now known as Cessnock in 1908.

* The local name, Nulkaba, was officially adopted in 1927.

* The Drayton family established a vineyard at Pokolbin around the late 1850s.

*  The Tyrrells Estate was set up in 1859 by a nephew of the first Anglican Bishop of Newcastle who produced his first batch of wine in 1864.

* After the Robertson Land Act was introduced in 1861 small landholders began to settle in the Rothbury/Pokolbin area.

* Vineyards began to spring up from the late 1870s.

* The depression of the 1890s dealt the local wine industry a blow which was compounded by the influx of cheaper wine from South Australia.

* In the 1960s the wine industry of the Lower Hunter really began to boom due to the closure of local mining operations and the reorientation of Australian tastes with the influx of European immigrants after the Second World War.

* Today the Hunter Valley has over 150 vineyards; plays host to very popular concerts in the summer months; and has created thousands of jobs for people from the surrounding towns.

There is a very useful and comprehensive website. Check out http://www.huntervalleyvisitorcentre.com.au/the-hunter-valley. 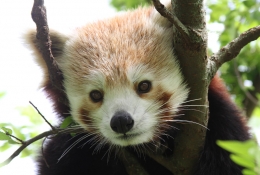 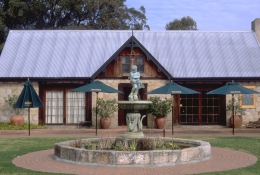 The cafe at Peppercreek Winery. 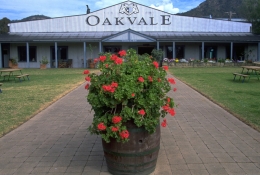 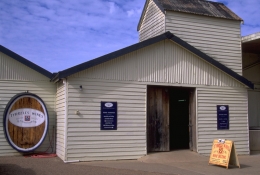 The cellar door at Tyrrell's Wines in the Hunter Valley. 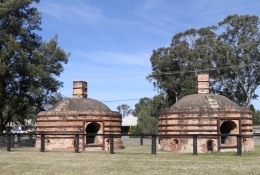