Pooncarie, which today is a tiny hamlet on the Darling River, was known in the late 19th century as 'The Port'. At the time it was a vital staging place for the river steamers which began plying the Darling River in 1858 en route for Menindee and Wilcannia . Today there is little more than a hotel, a store, a post office and several dozen people. However, it still hosts the Pooncarie Cup, a popular race carnival, every October.

Pooncarie is situated 1140 km west of Sydney via the Great Western, Mid Western and Sturt Highways; 518 km north east of Adelaide and 679 km north of Melbourne. Although it is more than 350 km upstream from the coast Pooncarie is only 56 metres above sea level.

Fishing and Camping Beside the Darling
There are three parks in the town and one of the central appeals of Pooncarie is that it is an ideal place to camp, to have a picnic and to go fishing in the Darling River. Little is now left of the settlement that grew up in the 1860s.

Mungo National Park
The main attraction in the area is Lake Mungo. It is a relic of life in Australia 30,000 years ago when the area was defined by a series of large, deep, interlocking lakes "teeming with large fish. The now dry bed of Lake Mungo would have been 20 kilometres long and 10 kilometres wide, with a depth of some 15 metres. On its eastern side sand dunes provided sheltered campsites by the lake shore" is the way archaeologist Josephine Flood described the area in Archaeology of the Dreamtime.

Aboriginal hunters and gatherers, accustomed to walking from water hole to water hole, settled on the shores of the lakes and established semi-permanent campsites where they could rely on the freshwater lakes for fish and crustaceans. The local fauna, drinking at the water's edge, supplemented their food supply.

About 16,000 years ago, as the whole area became more arid, the lakes dried up. All that was left was a 25 km-long sand dune, called a lunette, which stretched along the eastern edge of the lake and was, in places, up to 40 metres high.

When shepherds, many of whom were Chinese, arrived in the area in the 1860s they called the lunette the Walls of China.

Today that landscape remains unchanged. Arrive at Lake Mungo and from the Mungo Lookout above the Visitor Centre, you can gaze across the flat, barren bed of a long-departed lake with some heavily weathered sand dunes rising on the eastern horizon.

Lake Mungo is one of the most important archaeological sites in Australia and it is worth visiting – but only if you are accompanied by a knowledgeable guide who can explain the region's uniqueness and significance.

Lake Mungo's claims are threefold. It has "one of the longest continual records of Aboriginal life in Australia" having been occupied for over 50,000 years. The skeletons found in the sands of the lunette are the "oldest known fully modern humans outside Africa" and, most importantly, the skeleton of Mungo Woman (or Mungo I as she is officially known), which has been radiocarbon dated to around 26,000 years ago, "has provided the oldest evidence of ritual cremation in the world."

Josephine Flood has written of the discovery: "It is interesting that it is a woman who was cremated. Although no conclusions can be drawn from a sample of one, it at least shows that 26,000 years ago women were considered worthy of complex burial rites. What emotions inspired those rites – love, fear, or religious awe – we will never know, but all show a concern for the deceased which is the essence of humanity."

The way to make sense of Lake Mungo is to gaze across the dry lake bed, walk up the dramatic and unusual lunette, and silently contemplate the idea that once, tens of thousands of years ago, at this lonely, haunted place, Aborigines painted themselves with ochre, ate fish and mussels from the lake, buried and cremated their dead, cooked meat in simple hearths and ovens, sewed skins into cloaks and shaped bones and stones into tools and weapons. There is a unique magic about the place, a strange spirituality which is particularly apparent at dawn and dusk.

If you want to glimpse what life was like for Aborigines when our European ancestors were still living in caves then Lake Mungo is a genuinely unforgettable experience.

* Prior to the arrival of Europeans the land around Pooncarie was inhabited by the Barkandji Aboriginal people who had been in the area for at least 40,000 years.

* The district was first settled by Europeans in the 1840s. They illegally took up land for grazing.

* The town has been known as 'The Port' by locals since the days when it was a staging place for the river steamers which began plying the Darling River in 1858 en route for Menindee and Wilcannia .

* In 1860 the ill-fated Burke and Wills expedition passed through the area.

* In 1863 the small settlement was gazetted at Pooncaira. No one knows why it changed to Pooncarie.

* From the 1860s it became an important port on the Darling. It was the port for the huge grazing properties between Wilcannia and Wentworth.

* In 1879 the Telegraph Hotel opened for business.

* In 1880 the land along the Darling River was divided into pastoral holdings.

* In the 1930s the Pooncarie Aboriginal mission, was closed down.

* In 1941 the NSW Department of Main Roads constructed a punt across the Darling River at Pooncarie.

* Today the town comprises a hotel, a store, a post office and, in October, the Pooncarie Cup attracts thousands of race lovers to the town.

There is an interesting local website. Check out http://pooncarie.webs.com/. 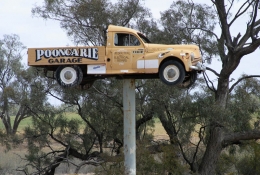 A distinctive piece of advertising on the outskirts of Pooncarie. 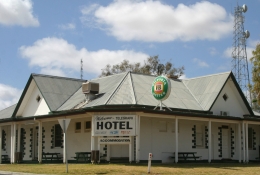 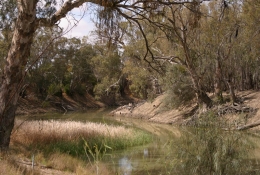 The peacefulness of the Darling River at Pooncarie. 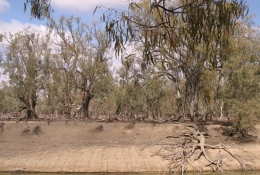 The banks of the Darling River at Pooncarie. 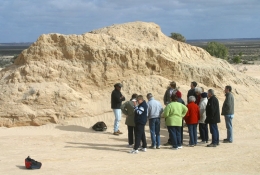 Graham Clarke, a local Aborigine from the Barkindji people, explains the Aboriginal connections to Lake Mungo. 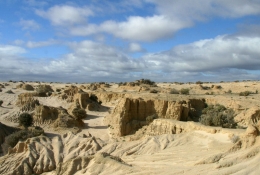 The strange moonscape that is the dunes at Lake Mungo.