Charming and historic port on the Gippsland coast

Port Albert is a holiday and day tripper destination with some excellent cafes, lots of interesting historic buildings, pleasant walks along the coast and a feeling that this is the ideal place to enjoy a day by the seaside.

Port Albert is located 233 km south-east of Melbourne via the Princes Highway and Moe and 222 km via Leongatha.

The settlement was originally known as 'Seabank' or 'Old Port'. This was abandoned when a new township of 'New Leith' was established 3 km to the south. The name Port Albert was eventually adopted, in honour of Queen Victoria's consort, Prince Albert.

Historic Buildings
Port Albert has a number of substantial buildings dating from the 1850s and 1860s. Most of these buildings are located along Tarraville Road which becomes Wharf Street. There are numerous detailed signs outside buildings so that a pleasant stroll from one sign to the next gives a very comprehensive picture of the historic nature of the town. Entering the town heading south-east along Tarraville Road the buildings are in the following order:

Gowrie House
Gowrie House is the first of the historic buildings on Tarraville Road (it is located at 65 Tarraville Road) which once comprised a row of buildings which included a bakery, butcher, boarding house, boot maker and draper. The draper operated out of what is now Gowrie House which dates from 1856. In recent times Gowrie House has been renovated and now, as a private residence, has three large bedrooms, two bathrooms, a large living room and an internal garden atrium.

Old Bakery
The Old Bakery (1859) was faithfully restored by artist Warren Curry, a leading landscape and marine artist, who successfully turned it into the Old Bakery Gallery. Curry now lives in both Port Albert and on Corfu, Greece having won a scholarship which included time to paint in Corfu where he lived for 17 years.

General Store
Dating from 1856 this charming building, part of the commercial complex along Tarraville Road, is currently the Port Albert Cafe & Wine Bar with a pleasant garden to the west and excellent, boutique food.

Port Albert Maritime Museum
The Maritime Museum, located on the corner of Wharf Street and Bay Street, was once the Bank of Victoria. Built in 1862, it received gold from the fields to the north. It now houses memorabilia of the port's nautical past, including a cannon from the wreck of the Clonmel. The Maritime Museum website explains: "Port Albert was the original Port of Entry for the Gippsland Gold Fields and the old bank vault houses a display on Gippsland Gold Discovery. In the entrance room is the 400 kg, 1.3m high drum lens from the Cape Liptrap lighthouse, the Cliffy Island cannon; and the story of the Bass Strait lighthouses is told in the display on "The Mailmen of Bass Strait". The growth and decline of Port Albert's fishing fleet is outlined in the fishing room display on "The Sharkers of Port Albert". There is also a comprehensive shell collection and the Chinaman's Point diorama and information boards have the findings of a recent archaeological dig at the site of the 19th century Chinese fish curing industry at Port Albert. Outdoor exhibits in the delightful gardens of the Museum include the Cliffy Island lighthouse work boat and the "Talking Boat", centred on the "Morning Star" and the evocative sounds of an overnight trip on the century old inlet fishing boat. As well as several giant anchors, the original Port Albert wharf crane and a mysterious moving boats mural, there is the restored Citadel Island lighthouse. This light was located on the top of a spectacular granite island off Wilsons Promontory and was the first automatic acetylene light installed by the Commonwealth Lighhouse Service in 1913." Check out http://yarrampa.customer.netspace.net.au/pamm.html. The museum is open 7 days a week from 10.00 am to 4.00 pm daily from the 1st September to 31st May. In winter it is open on weekends, school and public holidays from 10.00 am - 4.00 pm. Tel: (03) 5183 2520.

Old Derwent Hotel
Diagonally opposite the museum, on the corner of Wharf and Victoria Streets, is the old Derwent Hotel, with its painted brick exterior, timber veranda, and steep corrugated-iron hip roof. Erected in 1858 by John Foster it was designed to offer accommodation to passing diggers, it is no longer open to the public.

Wharf Street
The sign on Wharf Street identifies the section of the road between the Port Albert Hotel and the Post Office and explains that in this short distance were the office of the Gippsland Guardian (1855), the first newspaper in Gippsland; Jacob Ferris, Bookseller, Stationer, etc; Residence of Thomas Watson, Farmer; Mr Whymark, carpenter; Cobb & Co Booking Office; T Burrows Auction Rooms; and Shaw's Store.

Old Post Office
The old post office is a solid structure with gabled roof, rounded windows and, on both sides, projecting wings and attractive verandas supported by classical-style columns. Founded in 1864, it is probably Gippsland's first, and certainly one of Victoria's oldest, mail centres. It is now a private residence.

Government Wharf
Dating from 1860 the Government Wharf is a reminder that shipping activities started at Port Albert as early as the 1840s when a number of private jetties were built to service the livestock trade which shipped animals from Gippsland to Tasmania and Sydney. Port Albert was also the main supply port from the Gippsland goldfields until the railways were built. The Government Wharf was built in 1860 and has been used as a base for fishing operations ever since.

Old Rocket Shed
The sign outside the Rocket Shed explains: "The rocket and mortar store was completed by contractors Anderson and Avery in 1878 to house the Breeches Buoy rocket lifesaving equipment, issued to major Victorian ports in 1876. It was also used to store the oars, life jackets and other items carried by the Port Albert lifeboat."

South Street, Palmerston and the Angus McMillan Monument
Located at the northern end of Tarraville Road and running east is South Street, is a very simple monument to Angus McMillan. It stands in the roundabout at the South Street entrance to Port Albert. The fading plaque records that "On 14th Feb, 1841 Angus McMillan, Explorer of Gippsland, reached the Old Port about a mile west of this spot."
At one time, South Street was the dividing line between the port and the government township of Palmerston. Palmerston still contains the police station (1856) and the Immigration Depot (1857-8), through which large numbers of gold-prospecting Chinese immigrants once passed.

Christopher Robinson Walking Trail
The Old Port Walking Trail is now renamed after a local who became a Greenpeace hero. There is a sign at the Port Albert end of the trail which explains: "Christopher Robinson was born in Yarram in 1952 and spent his childhood in Port Albert. During this time, he developed a keen interest in boating, fishing and the sea. Later in life, this interest would provide him with the experience and motivation to become an integral member of the international Greenpeace environmental movement. He became an inflatable driver of great skill and for over 25 years Christopher used all means possible to prevent whaling, nuclear testing, harp seal slaughtering and old growth foresting. Christopher regularly put himself in life-threatening situations: shielding whales from harpoons, charging war vessels and sailing into fierce storms. His impact was felt internationally through his bravery in the Pacific, Australasia, Europe, North America and Antarctica. However, his heart always remained in Port Albert. This was where Christopher died in 2008 after a brief illness. People from all over the world came to celebrate his truly amazing life."
The Christopher Robinson Walking Trail starts at Stockyard Point, Port Albert and continues along the coast to Seabank (the former site of the town). It is a 5.37 km walk (it takes around 80 minutes) which is located within the Nooramunga Marine and Coastal Park. Walkers can expect to see some of the thirty species of migratory wader birds including the largest concentrations of Bar-tailed Godwit and Great Knot in south-eastern Australia. It is also possible to see Eastern Curlew and Red-necked Stints. The area around the walk is remarkably undisturbed and reminds walkers of what the land must have been like when Europeans arrived in the 1840s.
The flora along the walk, which is fringed by salt marshes and mangroves on the mainland and the islands, includes stands of Swamp Paperbark and Coastal Tea-tree and Coast Banksia and Coastal Manna Gum woodlands further into the hinterland. For more information and a map check out https://walkingmaps.com.au/walk/815 and http://portalbert.vic.au/activities/walking.

Nooramunga Marine and Coastal Park
Port Albert is situated within the Nooramunga Marine and Coastal Park, which stretches eastwards from Port Welshpool to Mann's Beach and covers a wetlands area of 30,000 hectares. The park consists of shallow marine waters, isolated granite islands, intertidal mudflats and a complex of over 40 sand barrier islands including a number of offshore islands, such as Snake Island, which are havens for parrots, sea eagles, migratory birds and other fauna. Fishing is permitted. Check out http://parkweb.vic.gov.au/explore/parks/nooramunga-marine-and-coastal-park. There are a number of downloadable maps and extensive information about walking, fishing, boating, camping and the elongated island known as Snake Island. There are walking tracks on Snake Island (Victoria's largest sand island) which are outlined in the downloadable brochure. There are also a variety of sailing tours offered by Nooramunga Sailing Tours. Check out http://www.nooramungasailingtours.com.au or tel: 0427 568 578.

* Prior to the arrival of Europeans the area around Port Albert was occupied by the GurnaiKurnai Aboriginal people.

* The Port was discovered by Europeans in 1841. In January and February the site of the future township was visited by three separate exploration parties.

* On January 2nd, 1841, the Clonmel foundered off the coast and the survivors' favourable reports attracted a group of speculators known as the 'Gipps Land Company'.

* The overland explorer, Angus McMillan, searching for a port from which to ship cattle to Van Dieman's Land, reached the port in February, 1841. By May, the first settlers arrived.

* In 1843 land was sold privately at Shipping Point.

* Port Albert's early commercial development was largely carried out by the merchants, John and Robert Turnbull, who bought up land at Shipping Point.

* It soon became the principal town and administrative centre of Gippsland and a port for the region's trade with Melbourne and Van Dieman's Land.

* A 250-metre timber jetty was constructed to facilitate the growing traffic.

* Port Albert was ideally situated to benefit from the extra trade generated by the discovery of gold at Walhalla and Omeo in the 1850s.

* In 1856 a powder magazine and the Bank of Victoria were built at the port.

* In 1858 the town of Palmerston was built nearby to compete with Port Albert.

* The fishing industry emerged in the 1860s.

* The settlement began to decline in importance in the 1860s (the Gippsland Lakes were opened to shipping) and while cattle shipping reduced there was an increase in gold, tallow, skins, potatoes, fish and oysters.

* By 1875 the town's hotels included the Port Albert Hotel and the Ship Inn.

* In the 1870s and 1880s the railways through Gippsland provided an alternative trade link with Melbourne.

* It prospered in the 1930s as a result of shark fishing in Bass Strait.

* In 1965 there were 33 professional fishing boats operating from the port.

There is an official local website. Check out http://portalbert.vic.au. 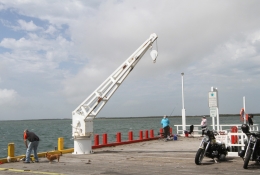 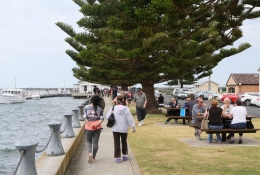 Holidaymakers relaxing on Wharf Street beside the harbour. 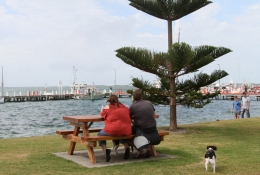 The joys of relaxing, with a dog, beside the harbour. 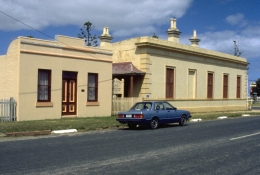 The Port Albert Maritime Museum (1862) - once the Bank of Victoria. 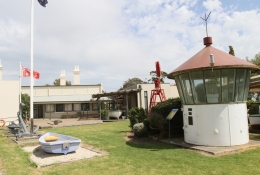 Nautical artefacts at the back of the Port Albert Maritime Museum. 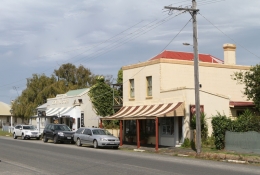 The Old Bakery and General Store on Tarraville Road have been turned into an Art Gallery and and excellent Cafe. 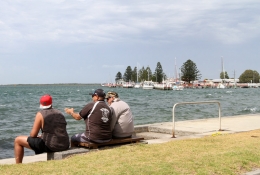 Sitting on the shoreline with the marina in the background.