Popular holiday destination which was once an important wheat port

Port Broughton is an attractive and accessible holiday and retirement destination on the Yorke Peninsula. Its location at the top end of the peninsula ensures that it is a little drier and more arid than the more southerly ports. The waters in the area are shallow (larger windjammers had to anchor 8 km off shore) which results in extensive areas of seagrass, mangroves and tidal flats. This results in excellent fishing and crabbing. Historically it was an important port for the export of wheat and barley in the 19th century.

Port Broughton is located 178 km north west of Adelaide on the western coast of Yorke Peninsula.

The explorer Edward John Eyre passed through the area in 1839 and named the local river, Broughton, after the Reverend William Grant Broughton, the first Anglican Bishop of Australia. The port was named after the river.

(a) Historical Walk - There is a short, pleasant 3 km walk which records information about 15 places of historic interest and two churches. It can be downloaded at https://docs.wixstatic.com/ugd/211bf6_6822c04d167b49c58761989f7f69bea4.pdf. It starts at the jetty, moves north along West Terrace to North Terrace, returns down Harvey Street to Bay Street and Edmund Street, before returning to the jetty.
The highlights include (1) the Heritage signboards near the jetty which tell the story of the town (2) the original jetty piles which Captain Henry Dale used as his private landing (4) the jetty itself. And the signs which records past aspects of the town - (5) the early industry sign, (7) the town administration sign (8) the station without a train sign (9) the Wheat Stacks sign (10) the Coffee Palace sign (11) the Flour Mill and Powerhouse sign (12) the Early Education sign outside the Heritage Centre and (15) the Port Broughton Hotel sign.

4. Port Broughton Jetty
In 1878, with the narrow gauge railway from Mundoora to Port Broughton completed in 1876, a new jetty was built. It was 1245 feet long, the bottom had to be dredged beside it, and it cost £3715. The jetty had a tramway running its length and it quickly became the vital link for the town as ships arrived to collect wheat and local fishermen used the jetty to fish for tommy roughs, snook, whiting and garfish. Ketches were used to carry goods, particularly grain, out to the clippers and windjammers which needed to be 8 km out into the gulf. They were capable of loads of 5200 tons of wheat.

12. Port Broughton Heritage Centre
Located in the Old School building at 10 Edmund Street, this centre contains historic papers, photos and an impressive collection of dolls. The centre is divided between themes of tools, ladies, boats, school, war, hospitals and is open by appointment only. Check out https://southaustralia.com/products/yorke-peninsula/attraction/port-broughton-heritage-centre or tel: 0437 592 683 or (08) 8635 2656.

(b) Encounter Walking Trail - this is a short walk from the jetty along West Terrace and along John Lewis Drive. There are five signs along the route which passes north along
* Mundoora Arm - a description of the mangroves, dunes, ridges, salt marshes, tidal flats and salt flats
* Station without a train - tells the story of the train which ran 16 km to Port Broughton from Mundoora.
* Buried at Sea - the story of Dr Mathwin who, in 1926, was South Australia's last citizen buried at sea.
* Unusual Facts about Port Broughton including "Upper Spencer Gulf is one of the only three places in the world to experience the phenomenon of dodge tides. The sea dodges its normal tide, ceasing to move from mid level for approximately 18 hours. The only other places where dodge tides occur are the Gulf of Mexico and along the North African Coast." For more detailed information download Encounter Walking Trail at https://docs.wixstatic.com/ugd/211bf6_12cc925600eb4edea02660df4ec59104.pdf.

(c) Port Broughton Area School Walk of Remembrance
This is a kilometre long timeline which passes through scrubland adjacent to the school and Community Library. This trail was researched, designed and built by students and staff of the school. It records history from 1899-2001 with signs which record the most significant events including all the wars Australia has participated in. Check out https://www.weekendnotes.com/im/006/05/broughton111.jpg for more details.

(d) Broughton to Fisherman's Bay Walk
This is a 6 km walk along the coast from the Port Broughton jetty to Fisherman's Bay. It passes the Bayside Caravan Park, the town's Boat Ramp, a number of tidal peninsulas and reaches the sleepy coastal village of Fishermans Bay. There are clear signs along the way. Check out https://www.weekendnotes.com/im/006/07/fishermans-bay-a1.jpg for more details.

* Prior to European settlement the area around Port Broughton was inhabited by the Narangga Aborigines.

* The first European into the area was Matthew Flinders who reached the shores of the Yorke Peninsula in 1802.

* The explorer Edward John Eyre passed through the area in 1839. He named the local river, Broughton.

* Land in the area was taken up by pastoralists. It had all been leased by 1851.

* The land around Port Broughton was unsuitable for grazing and it was relinquished in 1869 and sold off in acre lots.

* Subsequent settlement of the area led to a petition for the establishment of a port. The petition, signed by 97 local landholders, led to the creation of Port Broughton.

* The Farmers Weekly Messenger reported: 'Opening of Port Broughton on June 16  1871. On Monday morning what is promised to be a port was opened near Medora Creek [Mundoora Creek] about 30 miles from Wallaroo, by the arrival there of the Triumph ... Drays were waiting to take away the vessel's cargo, which met the boats and a raft which conveyed the loading from the vessel's side.'

* The town was surveyed in October, 1871 and blocks were offered for sale on the recommendation of Captain Henry Dale.

* Sixty allotments were offered for sale in March 1872. This was, however, always marginal land. The farmers had a huge job clearing the land. They considered sowing 2 acres a good days work and they were constantly confronted with the shortage of water and the likelihood of drought.

* A small jetty was built in 1873 and wheat was taken from the jetty out to the waiting ships.

* In 1876 a tramway from Mundoora to Port Broughton was completed.

* Aborigines remained in the area after European invasion. The last reported camp was in existence around 1897.

* The passenger rail service ceased in 1925.

* The jetty continued to be used by ketches and windjammers until 1949.

* In 1953 a cyclone seriously damaged the jetty.

* By 2010 there was a prawn fishing fleet operating from the port.

* Today Port Broughton is a popular summer holiday haunt on the shores of the Spencer Gulf. It is sustained by a mixture of fishing and tourism.

There are useful local websites. Check out https://yorkepeninsula.com.au/port-broughton and https://www.portbroughton.org.au. 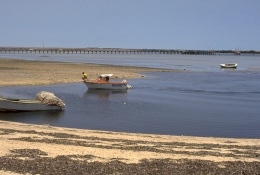 The slipway and jetty at Port Broughton 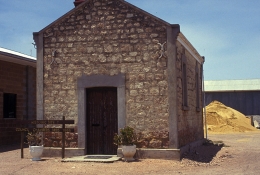 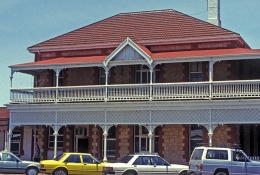